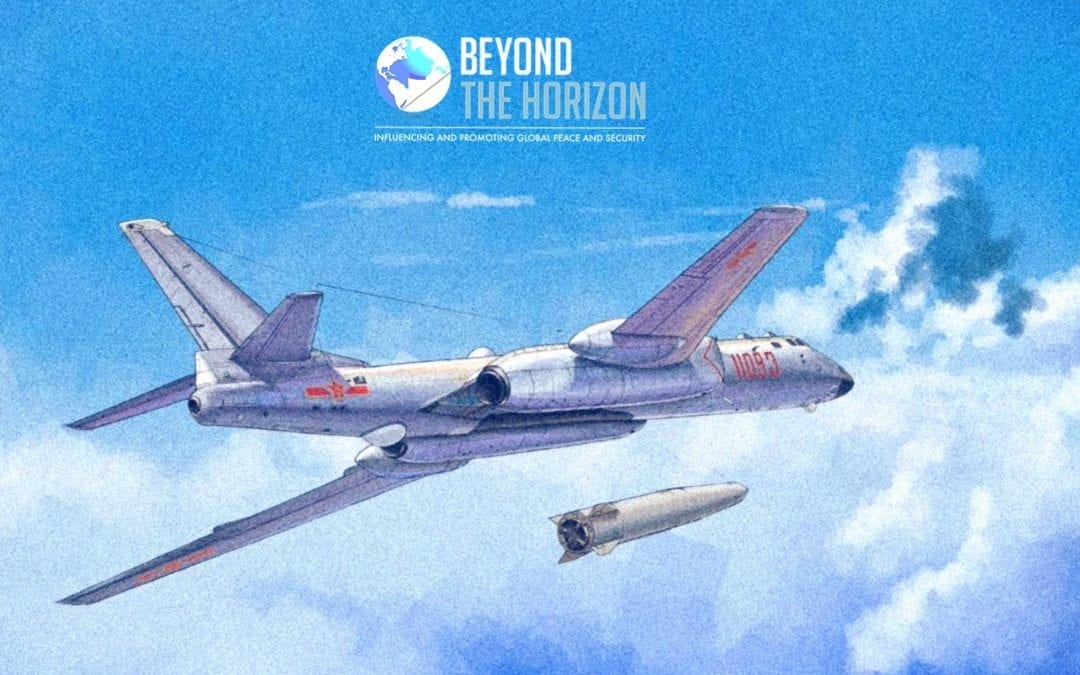 The H-6K made its first public appearance at the Zhuhai Airshow in 2018. The Zhuhai Airshow takes place in Zhuhai/China every two years and is largely a showcase of what China can provide in the area of military aviation equipment for export. But this year (November 2020) it has been postponed until further notice due to Covid-19 pandemic.

As mentioned in previous pieces about China’s Stealth Fighters such as the J-31, J-20, H-20, the U.S. is closely tracking China’s readiness for modern warfare according to China Military Power Report which was released on 1 September 2020. Accordingly, the PLAAF for the first time deployed H-6K bombers to the TSENTR 19, Russia’s strategic military exercise.

The PLAAF publicly unveiled the H-6N (A trio of H-6Ns passed over Beijing) as a long-range strategic bomber in a parade celebrating the 70th anniversary of the air division in October 2019. The H-6N’s most important upgrade over the older H-6 bombers is the inclusion of air-to-air flight refueling probe, as well as modified built-in fuselage that would enable the external transport of a supposedly nuclear-capable ALBM.

History and Capabilities of the H-6 Family

The H-6 belongs to one of the bigger families of aircraft which has a lot of variants of the H-6 such as from H-6 original conventional bomber, H-6A nuclear bomber, H-6B reconnaissance aircraft to H-6K strategic bomber and H-6N nuclear-capable bomber with air refueling capability.

In the mid-1950s, China purchased a few Tu-16 medium-range bombers from the Soviet Union. Later on, this aircraft was produced under license in China under the name Xian H-6. The Chinese variant flew for the first time in 1959. The initial H-6 was a conventional medium-range bomber. It was not until the introduction of the H-6A that it acquired a nuclear strike capability. The bomber was designed to strike priority targets and engage U.S. carrier combat groups. The H-6 can transport 9,000 kg of payload, including various air-to-ground missiles, air-to-ship missiles, and free-fall bombs. The aircraft has a nuclear attack capability. Some models can even carry air-launched cruise missiles.

The H-6K variant was put into service in 2009. A major overhaul of the original aircraft which is optimized to carry anti-ship cruise missiles and long-range ground attack missiles.

The first reports on the H-6N and its ballistic missile launch mission began appearing in 2017. In October 2019, China publicly unveiled the H-6N bomber, which is China’s first nuclear-capable bomber with air-to-air refueling capability. This signals the comeback of the air branch of the Chinese nuclear triad.

The most significant difference between N and K is the elimination of the bomb bay on the N and the inclusion of a semi-recessed area with a hard point for a large missile.

One should take not that H-6 is an ideal core platform to support Beijing’s overall Anti Access/Area Denial (A2/AD) strategy to keep U.S. forces at a distance. On the other hand the H-20 is scheduled to fly with some of the H-6s and in due course replace it. Nevertheless, the H-6N has the potential to be another great addition to the already significant A2/AD capabilities of China, particularly in the South China Sea.

According to military experts the new Chinese H-6N strategic bomber could be capable of carrying either CJ-100 supersonic cruise missiles or the WZ-8 supersonic stealth spy drone, extending its maximum range to 6,000 kilometers. Since CJ-100 is considerably larger than CJ-10, some analysts believe its range would reach 2,000 km. Aerial refueling could extend the H-6N’s operational range by 500 km over the H-6K to more than 4,000 km. Thus, in theory, the CJ-100 could extend the H-6N’s strike range to approximately 6,000 km.

China has been gradually and consistently adjusting its arsenal to the trends of modern warfare. In this regard, the PLAAF is  candidate to take its place as it is now quickly overtaking Western air forces in a wide range of capabilities.

China has so far described the H-6N bomber and the future Chinese strategic stealth bomber (H-20) as dual-capable delivery platforms. The PLA is upgrading its bomber with two new ALBMs, one of which may include a nuclear payload. With its conventional and air-launched nuclear ballistic missile, China may soon have a complete and sustainable nuclear triad of delivery vehicles that are dispersed among land, sea and air forces for the first time.

China’s drive to build strategic fighters and nuclear-capable bombers such as H-6K, H-6N  has raised concerns about an arms race. Even though China has a long way to go in catching up the advanced American bombers like the B-1B, the B2 and the B-21 stealth bombers, it is surely getting closer.