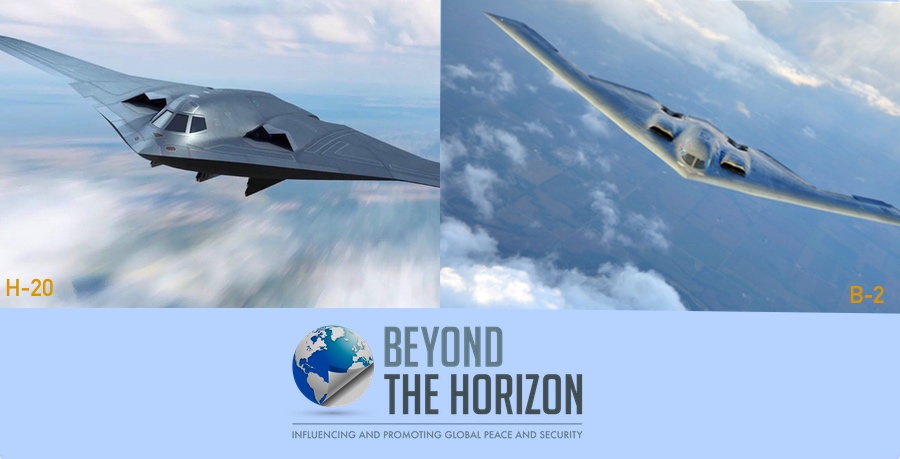 The Zhuhai Airshow to be conducted in November 2020 is expected to become a venue to promote a positive image of China by showcasing its success in pandemic control. China will unveil its new stealth bomber as a way of proving the coronavirus pandemic has not affected Chinese defense industry. Of course, if Chinese authorities do not change mind about holding the airshow despite a resurgent Covid-19 pandemic.

In October 2018, China’s public media reported that the People’s Liberation Army Air Force (PLAAF) would publicly display the H-20, the new stealth bomber in a parade celebrating the 70th anniversary of the air division in 2019. So far, this did not take place. The new bomber is expected to make its first public appearance in November at the Zhuhai Airshow.

It is of note that, while not much is known about this platform yet, its existence has been cited in the Pentagon’s annual “China Military Power Report” for 2019 and 2020.  The 2020 report states that the new H-20 will likely have a range of “at least 8,500 km”, “a payload of at least 10 metric tons” and “a capability to employ both conventional and nuclear weaponry”.

The new bomber is said to be capable of conducting attack to targets beyond the second island ring – which includes U.S. bases in Japan, Guam, the Philippines, and other countries – from bases in mainland China. The third island ring extends to Hawaii and the coast of Australia. Reportedly, it will be capable of carrying nuclear and conventional missiles with a maximum take-off weight of over 200 tons and a payload of up to 45 tons. The H-20 is estimated to fly at subsonic speeds and could be capable of delivering four hypersonic cruise missiles.

The new bomber is scheduled to fly with the H-6 and eventually replace it. The latter will take place only after an adequate number of H-20s are manufactured and delivered. This type of staged model somewhat resembles the American plans for the B-2 and B-21 bombers. The B-2 is scheduled to fly for more years before enough number of B-21 are delivered.

Whereas the H-6 is an ideal platform to support Beijing’s overall Anti Access/Area Denial (A2/AD) strategy to keep U.S. forces at a distance, the arrival of the H-20 alone will give the PLAAF a strategic capability similar to that offered to Washington by the B-2 or B-21 underway. The main motivation behind production of the new stealth bomber centers on playing strategic nuclear deterrence roles and represent China’s evolution into a full-scale nuclear triad. The delivery of the H-20 would mark the accomplishment of China’s “nuclear triad” of land-based Inter Continental Ballistic Missiles (ICBMs), submarine-launched missiles and air-launched weapons.

It is considered that the H-20 has been under development since the beginning of the 2000s. However, the project to develop a strategic bomber was first announced in 2016 by the PLAAF.

As little known about the concrete design and performance characteristics of the new bomber, it would be wise to keep the final comments until the official launch of the bomber. However, it is obvious that the PLAAF envisions a much more robust multi-role purpose for the H-20 than a conventional bomber.

Many analysts doubt declared capabilities of the engine of the new bomber. Some speculate that the new bomber might use the NK-321 Russian engine, while some others says it would be equipped with WS-10 engine. The engine seems to be a version of an upgraded WS-10 engine which is not powerful enough to power up the new bomber. Thus, it seems it will a transitional engine for the time being.

The U.S., Russia and China are the three countries which met the needs in order to develop strategic bombers capable of hitting targets around the world. At the moment it is clear that the   H-20 is the only stealth bomber type in advanced development that will be delivered in the near future. The new bomber is expected to join the inventory of China as early as in the mid-2020s. Beijing’s efforts to develop strategic weapons have raised concerns about an arms race between China, Russia and the U.S.

China is trying to prevail over the US and the West militarily through its weapons program. If the H-20 has the range and stealth characteristics attributed to it, it has the potential to change the strategic balance between the U.S. and China by exposing US military bases and fleets to unexpected air attacks throughout the Pacific.

As the stealth technology is affecting modern warfare, in addition to the U.S., Russia and China, more and more nations are likely to monitor advanced military capabilities for inclusion in their inventories in the near future.