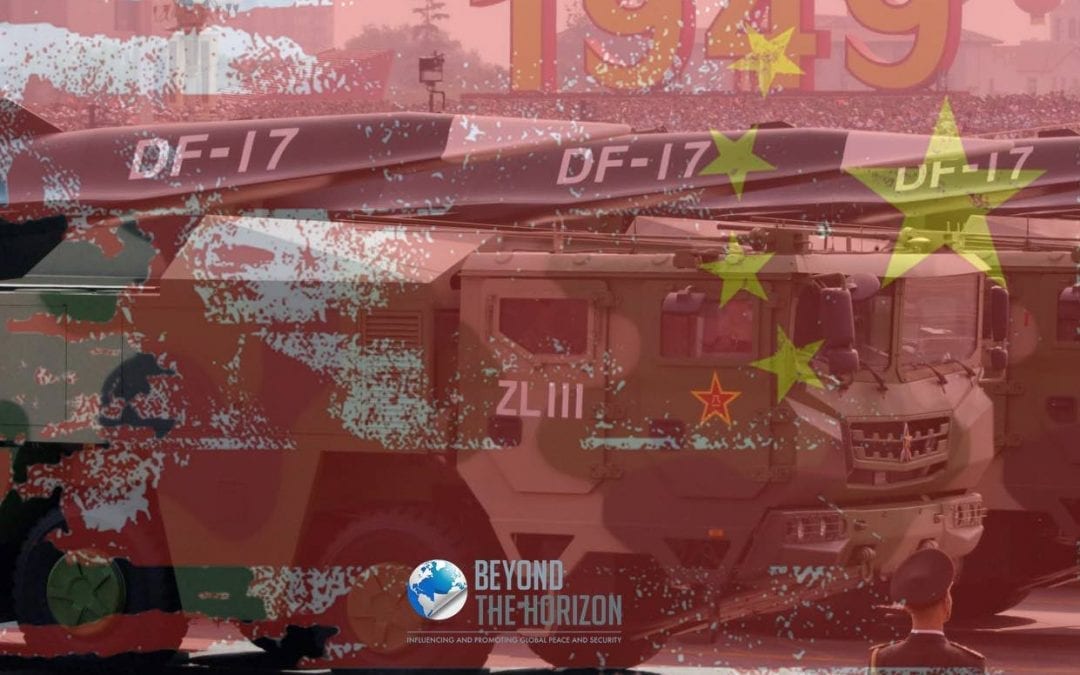 Technological developments are critical for the robust national defense industry, which is deemed an essential element of national security.

The Chinese military has unveiled a new hypersonic ballistic nuclear missile that could violate all existing anti-missile shields deployed by the U.S. and its allies.

On 1 October 2019, the onboard Dongfeng[1]-17 (DF-17) was among the weapons on display during a major military parade led by President Xi Jinping on the occasion of the 70th anniversary of the founding of the Chinese state.

While other countries are working on hypersonic weapons as well, China is pursuing a long-term approach to develop strategic technologies and close the capability gap with West, following an ambitious  Russia. The U.S. intelligence agency assessed that the DF-17 would not be deployed until 2020. As Avangard hypersonic gliding vehicle (HGV) is scheduled to enter into service by 2020, it seems that the DF-17 will be second hypersonic glide vehicle that will become available in 2020.

The DF-17 hypersonic glide vehicle (HGV) has been tested at least six times since 2014, according to Washington Times. The first flight test was conducted on 1 November and the second test on 15 November 2017. The first test was the first Chinese ballistic missile test after the completion of the first plenary session of the 19th Congress of the Chinese Communist Party.

During the first test from the Jiuquan Space Launch Center in Mongolia, the missile payload flew about 1,400 kilometers, with the HGV flying at an altitude of 60 kilometers after the completion of the DF-17 ballistic and re-entry stages. HGVs start their flight after leaving the ballistic missile launchers following a standard ballistic trajectory to give the payload vehicle sufficient altitude. When the glide vehicle leaves the weapon, it is capable of achieving speeds of up to 10 Mach. Because of its speed, the glide vehicle is much harder to intercept than a conventional missile. Besides, the glide increases maneuverability and extends its range.

As far as DF-17 is concerned, China has tried to establish a highly sensitive system. Analysis of the missile’s first tests by US defense experts in November 2017 found impressive precision with test units hitting their targets at a distance of several meters.

Some of the U.S. intelligence assess that the DF-17 has a range of 1,800 to 2,500 kilometers. The weapon should be able to carry both nuclear and conventional payloads.

On 1 October, National Day parade, the announcer stressed that the DF-17 was an exclusively conventional weapon. That’s to say it will have no role in the delivery of nuclear weapons. However, the precision of the system will allow it to play not only a useful conventional but also unconventional role for the Chinese army.

Missiles such as the DF-17 pose a challenge to the U.S. and its allies. China and Russia are already capable of hitting the United States with intercontinental ballistic missiles that, once launched in salvos, could strangle US missile defenses. In this regard, such conventional strikes might disable critical C2 centers and even airbases.

Moscow’s efforts to develop next-generation hypersonic missiles have raised concerns about an arms race in the U.S., China, and Russia. Currently, Chinese and Russian hypersonic technologies are at the mass production phase. But the U.S. will be able to launch its first HGV unit as early as 2023. Unlike China and Russia, the United States does not currently develop hypersonic weapons for use with a nuclear warhead. As a result, U.S. hypersonic missiles are likely required more accuracy and will be more technically challenging than nuclear-armed Chinese and Russian systems.

General John Hyten, then commander of U.S. Strategic Command, expressed to the Senate Armed Services Committee in March 2018: “We don’t have any defense that could deny the employment of such a weapon against us.” This means DF-17 may threaten US forces and their allies in the Western Pacific with a potential range of a thousand miles.

* Dr. Aziz Erdogan, PhD is a non-resident fellow at Beyond the Horizon ISSG.