What to Expect from the Collaboration? Practical Industrial Cooperative Solutions 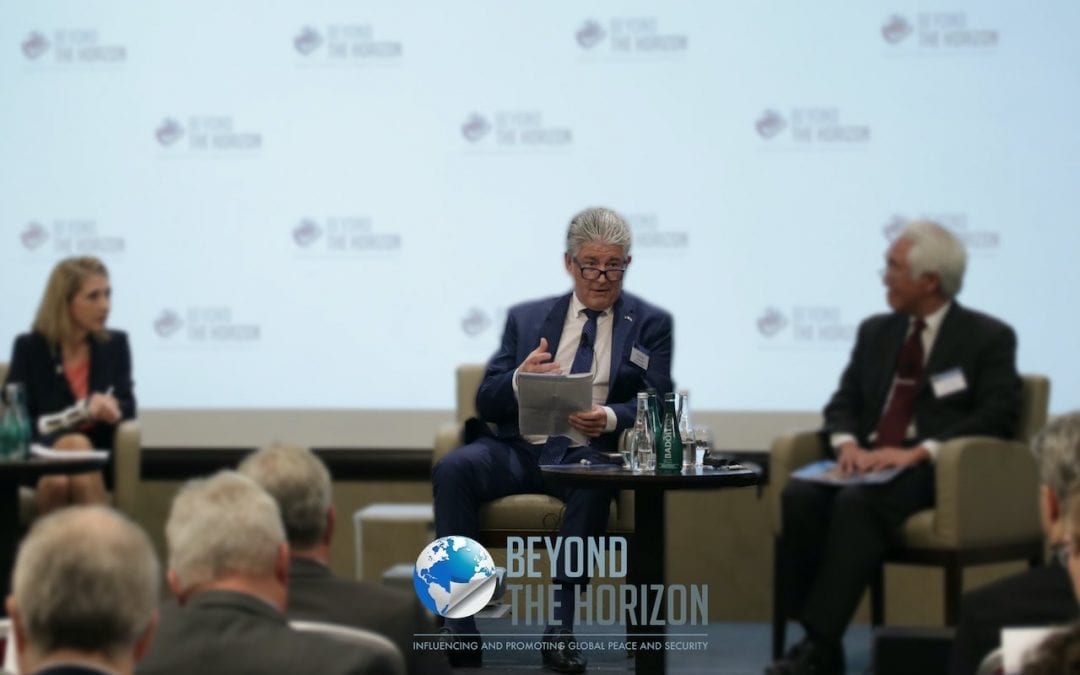 First, thanks to the organizers for this excellent event and inviting the American Chamber of Commerce to the European Union (AmCham EU). So, today, at this event, I am representing AmCham EU. I am also Acting Chairman of the NATO Industrial Advisory Group (NIAG). I will bring some perspectives from that point of view as well. I work at United Technologies. As I am speaking on behalf of AmCham EU, I am not going to give all the details about AmCham EU. But they also have a security & defence committee (SDC) and I am chairing that committee. In that AmCham EU SDC we have many member companies, i.e., United Technologies, Boeing, GE Aviation, Honeywell,  Lockheed Martin. Only those  5 companies employ more than 100,000 people in the EU. And it’s those 100,000 people I’m mainly representing. Today, I’m not representing our colleagues in the U.S.; I’m representing those 100,000 people. I am one of many Europeans who work for a U.S.-headquartered company with a relevant footprint in the EU.

Here, I would like to make a point on what has been referred to by an earlier speaker as transatlantic defence industrial base. I also heard well; there’s a U.S. industry. There’s a European industry. Well, I would like to point out that there’s a third layer that actually has U.S. industry based in Europe since more than 100 years and you have European industry in the U.S. So that’s a kind of layer that is often forgotten in many of these discussions. So I am representing the ones based in Europe with more than 100,000 people in Europe working for five U.S.-headquartered companies committed to and invested in Europe.

What are the challenges?

I don’t speak about the strategic context. We talked about it before the political context. So, let’s go to the typical challenges that industry is facing;

Lack of resources although defence budgets are increasing, but there’s still a lot to be done. Most people talk about the 2% of national GDP that should be spent on defence. However, the NATO Member Countries and the European PESCO participating Member States also committed themselves to spend 20% of that defence expenditure on investment (including R&D). So, policy and decision makers have to look at that as well. There are still some countries in Europe for instance that spend more than 70% of their defence budget on personnel.

Domestic industrial policies and preferences. We heard this morning from the European Commission and European External Action Service Representatives that more than 80% of defence budgets in the EU are spent nationally. So, from an industrial perspective, one has to deal with all these national preferences.

Restricted market access. On both sides of the Atlantic there might be some restrictions that we have to deal with. Fragmentation still exists, especially on the European side.

The large difference between investments in the U.S. and Europe. I heard this morning that the R&D gap between the U.S. and the EU is a factor of six to one. The U.S. is indeed spending much more on R&D, acquisition and sustainment of weapon systems and related equipment. If you look at purely procurement (buying new tanks, aircraft, ships…), that’s also a factor of four or five to one as well if one compares the U.S. to the EU. So, taking into account that the U.S.’ and the EU’s overall GDP is more or less the same, the defence expenditures are quite different.. So that’s why a focus on effectiveness and efficiency are needed.

Then of course, one big challenge is still export control. I always hear people saying: “ITAR, it’s a barrier to cooperation.” Now,  in the U.S. there is only ITAR and EAR; in the EU there are more than 28 export control regimes. So, within the EU, companies also face export control issues. Certain EU Member States require Info on the end user and the end use when products are transferred cross-border in the EU with a final export outside the EU.

So, what are the enablers. Is there still light in the tunnel? Well, we are celebrating the 70th anniversary of NATO this year. Since many years people refer to Article V of the North Atlantic Treaty. However, I would like to quote Article II “…The Parties will seek to eliminate conflict in their international economic policies and will encourage economic collaboration among all the parties or some of them.” So, I think that’s something we have to remind people on both sides of the Atlantic.

There is also the joint EU-NATO declaration of 2016, signed by the President of the Council, Donald Tusk, the President of the European Commission, Jean-Claude Juncker, and the Secretary General of NATO, Jens Stoltenberg. They say: “There is an urgent need to: … Facilitate a stronger defence industry and greater defence research and industrial cooperation within Europe and across the Atlantic.”

So that’s why I would like to recommend the following as your takeaway for today: “If our Heads of State and Government are stressing the need for a stronger defence industry and greater defence research and industrial cooperation within Europe and across the Atlantic, they should open up the transatlantic defence market. Because otherwise we cannot achieve this goal at this time.

Examples, is it so bad as some people claim? A lot of people say for instance that the U.S. defence market is closed, others say the European defence market is closed. I will give you some recent examples. Boeing reached out to SAAB to build a new trainer aircraft for the U.S. Air Force. Boeing reached out to Leonardo to build new helicopters for the U.S. Air Force. Then we have the F-35 example in Europe. Many companies in different EU Member States have access to the F-35 program. Pratt & Whitney, for instance, who provides the F135 engine on the F-35, cooperates with certain companies in Europe.. So that’s on the US side.

If you look at the EU side, the same openness is there. Example: Leonardo works with GE Aviation, Leonardo works with Honeywell, some other U.S. companies do as well. Airbus, for example, and the Eurofighter consortium are working with UTC. So, transatlantic defence cooperation at political level might sometimes be difficult, but at the industrial level we go for the best value for money. We look for the best in our supply chains, it’s transatlantic, it is global. So, we go for the best partners.

NATO examples of multinational cooperation; Alliance Ground Surveillance System (AGS), it’s really a transatlantic cooperation between industry. And the latest one in the pipeline is the Alliance Future Surveillance and Control (AFSC) program, i.e. the replacement of the AWACS aircraft; many companies, already today, on both sides of the Atlantic, are collaborating in the scope of this program.

Can we do better? Yes, we can. So, we still have this industrial base on both sides of the Atlantic and I think that some people made a good point. Maybe we should go for a Transatlantic Defence Technological and Industrial Base (TDTIB). I don’t think there’s a European defence technological and industrial base today; there are still national DTIBs that work together. So, Transatlantic Defence Technological and Industrial Cooperation (TADIC) has to be fostered. Look at the 2012/2014/2016 NATO Summit declarations and the 2016 EU-NATO joint declaration.

Reciprocity? Yes. Everyone talks about it. We agree. The defence markets on both sides of the Atlantic should be open to each other. Promote the adoption of best available technologies. Don’t always try to develop your technologies at home if the best of the best are available off-the-shelf cross-border within the Alliance. The development money could be spent on other capability gaps. Think about the best solutions for the taxpayer and for the military.

I’ve already talked about import-export controls. Import-export rules have to be harmonized not only in Europe, but also transatlantically. Otherwise transatlantic defence technological and industrial cooperation is kind of difficult.

For conclusion. It’s nice to say that it’s all about capability development in support of the military. Policy makers talk about the need for capabilities. Well, there is no capability without industry. I also think we need to reach out to academia; the so-called triple helix. You need cooperation between the governments, academia, and industry to come up with the best capabilities for the military.

Here we have a good example within NATO. Since decades the NATO Industrial Advisory Group (NIAG) is conducting studies on behalf of NATO since more than 50 years and that’s a good example on transatlantic cooperation. Industries from both sides of the Atlantic have access to all those NIAG studies. There’s also the Science and Technology Organization (STO) within NATO. Five thousand scientists are collaborating since decades on certain lower TRL projects. So, this transatlantic research collaboration also exists. So, we are asking the policy makers  to improve procedures and eliminate barriers.

The last one, transatlantic defence technological and industrial cooperation indeed requires a level playing field. An ‘appropriate’ level of strategic autonomy is important. However, this shouldn’t hamper collaboration between companies in the EU and in North America.

I close now with another quote, a quote from Mr. Valdis Dombrovskis, VP at the European Commission. He went to Washington DC in 2017 for a conference and there he said the following: “Laws change, governments change, the context changes … but it is important that the principles and trust binding the EU and the U.S. remain the same.”