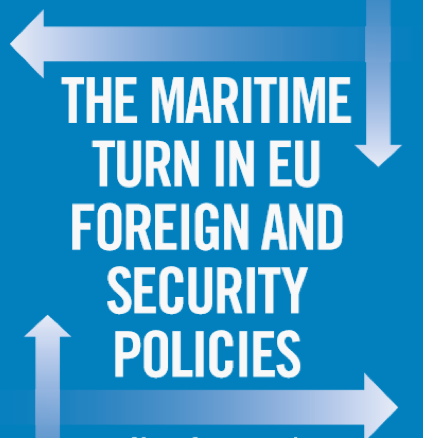 Marianne Riddervold, an eminent scholar of “EU Maritime Security Policies,” is currently an Associate Professor at the Norway University of the Applied Sciences and a Researcher at The Norwegian Institute of Foreign Affairs in Norway. In 2013, she was awarded a three-year post-doctoral fellowship grant (2014-2016) from the Norwegian Ministry of Defense to study EU maritime security policies, which is the main topic of her post-doc project. In 2015-16 she was a visiting scholar at UC Berkeley’s Institute of European Studies (Riddervold, 2018)

She provides the first substantial treatment of the maritime foreign and security policies of the European Union with her book. Although maritime security has been amongst the fastest growing areas of EU security integration, it still remains under-researched amongst scholars. This is the first book studying EU maritime foreign and security policy across cases, and it does so by exploring the leading instances of this policy field. It is also the first attempt to systematically conduct a comparative case study of EU maritime security policies from an analytical perspective where alternative theoretical aspects are applied. In doing this, she contributes new empirical and analytical knowledge across a variety of fields. Her findings add to the literature by a comparative, theoretically informed analysis of EU maritime foreign and security policies across five cases: The EU’s two naval missions, the EU’s Arctic policies, the EU policies towards the Maritime Labour Convention in the International Labour Organization, and the EU’s Maritime Security Strategy.

Through a number of in-depth and comparative studies across these cases, three main empirical questions are addressed in three separate parts of the book:

In the first part, she is particularly concerned with whether or not EU maritime security policies remain true to the claim that it is based on global norms even if the EU has developed naval military means and despite the EU has been in crisis. To study the characteristics of EU maritime foreign and security policy, in the empirical case studies, she explores the relevance of alternative hypotheses developed by two analytically distinct types or models of foreign policy—a traditional realist great power and a humanitarian model.

Moreover, she applies the framework in a comparative study of two policies where strong economic interests were at stake, namely naval mission Atalanta and EU policies towards the ILO Maritime Labour Convention. She also explores whether the EU’s newest mission, Sophia, testifies to a humanitarian model of foreign policy, as claimed. Then she continues the debate on the role of norms in EU maritime security policy by conducting a first attempt to establish what type of actor the EU is becoming in relation to the maritime Global Commons in an in-depth study of the EUMSS and the EU’s Arctic policies.

Part 2 of this book contributes to this debate by exploring the influence of the different actors, including the Commission, the EEAS, and the member states in maritime foreign and security policy-making processes.

Part 3 provides an in-depth study of the EUMSS policy-making process and explores the impact of external, geopolitical factors on EU maritime foreign and security integration, studying the Ukraine crisis’ impact on the adoption of the EUMSS and the development of EU’s Arctic policies. Also, she digs further into how the Commission influences developments in this domain, exploring the relevance of four different hypotheses in the main cases covered in this book, that is, the EUMSS, the EU’s two naval missions Atalanta and Sophia, and the EU’s Arctic policy. Lastly, she conducts an in-depth study of the EU’s anti-piracy mission to explore why the EU member states agreed to launch an autonomous mission in the waters of Somalia when there already was a newly established humanitarian NATO operation in the theatre.

She sums up the main findings in the book and sums up their empirical and analytical implications In Chapter 11. She has several valuable conclusions in this part. Finally, her studies confirm that the EU indeed is becoming global maritime power. She states that the EU now has its own Maritime Security Strategy with a functioning and comprehensive action plan, two major ongoing military, naval operations, to a large degree acts with one voice at the international scene, and it has taken important steps in the development of an Arctic policy.

She concludes that the EU is no longer only a soft power but increasingly uses military means to respond to new security threats and challenges, also known as ‘soft threats’ such as piracy and migration.

As being the first book in this area of research, she examines the issue in different aspects with a robust academical approach by both using empirical and analytical methods to justify her outputs and find answers to her research questions. At the beginning of every other chapter she describes her aim and at the end come up to her conclusions in a definitive manner. While she provides short sum-ups at the end of chapters, she does not forget to localize the place of the topic; you have already deep dive into, within the bigger picture of the book. She has achieved a demanding job with working on a variety of data collected from 2004 to 2017. Data consist of altogether 48 interviews and follow-up interviews on emails with actors from all the different EU institutions as Commission Directorate Generals (DGs), the European Parliament, the Council Secretariat, and different parts of the Commission, besides a few of the interviews with NATO and IMO officials as outsider’s perspective.

In Conclusion, this is a highly comprehensive and influential book besides being the first one in the research area regarding EU Maritime Foreign and Security Policies.

I highly suggest to readers, especially researchers and scholars, who are interested in EU’s Maritime Security Strategy, drivers and the mechanisms of maritime policy-making within EU and its consistency and integration with EU Foreign Policy in general.