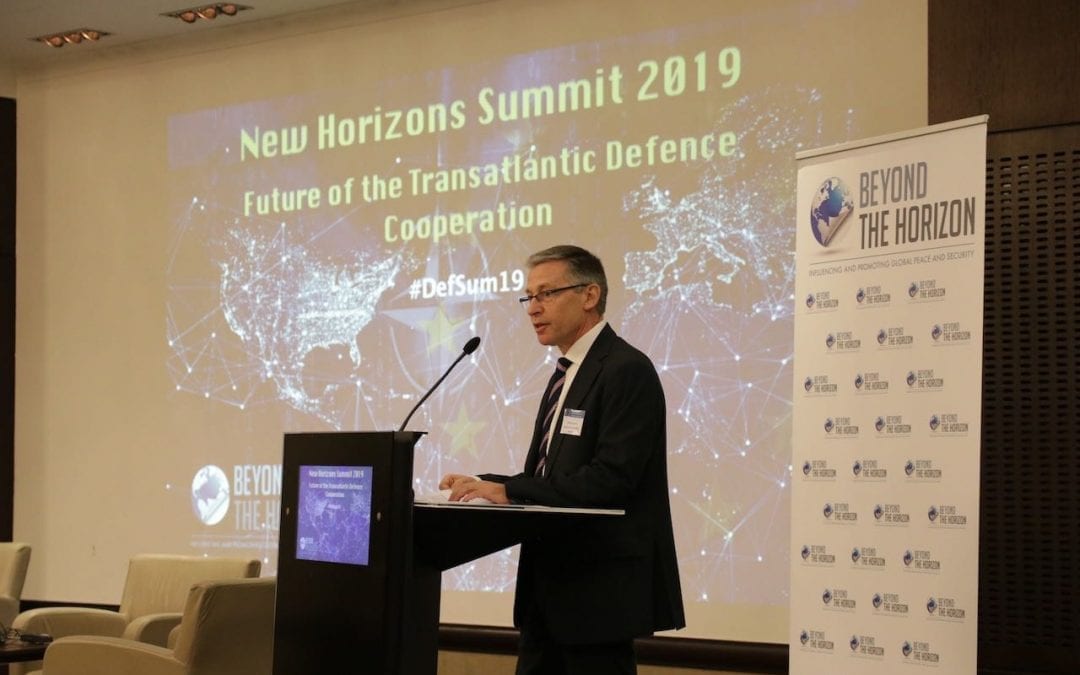 Ladies and gentlemen, Excellencies, let me first thank the organizer, Beyond the Horizon, for inviting me today. It is indeed a real honour and a great pleasure for me as a representative of Belgian Foreign Affairs to address you today at this summit.

Indeed, as you know, Belgium is one of the founding members of the EU and NATO. My country is also hosting the headquarters and main institutions of both organizations. Moreover, in a year when we celebrate the 75th anniversary of the D-Day but also the 70 years of existence of NATO, it couldn’t be any better opportunity to organize such an event, like the one of today, dedicated to the future of the transatlantic cooperation.

But before we are looking at where we are heading up to, let me dwell on the past. We need to remember the past and then we’ll consider the present times and the new challenges. In the aftermath of the Second World War, Europe had to recover from its injuries and from its ruins. It had to rebuilt in a safe, prosperous and stable manner. Transatlantic cooperation through the Marshall Plan and the creation of the alliance along with European initiatives on the industry and economic side, contributed to these objectives.

The Washington treaty itself was not only about defence, it was also and foremost about shared values across the Atlantic and on European soil. NATO was created to safeguard democracy, individual freedom and rule of law. The Alliance has served the interests of all its Allies and the European Steel and Coal Community has grown up and become what we know today, the European Union. So, peace and prosperity have been preserved.

Notwithstanding the new dividing line that appeared on our continent, the Cold War ended without any shots being fired. So, the transatlantic cooperation has proved to be fundamental for the European security.

Let me turn now to the present times and their new challenges. As a consequence of the new paradigm shift that happened in 2014 the NATO and EU need to constantly and continuously adapt. To the East, international law was broken with the illegal annexation of Crimea. The borders were drawn by force and a new approach to warfare applied. To the South, instability in the Middle East, in North Africa, but also in the Sahel region, fuel terrorists’ threats and non-state actors. These developments were undoubtedly a real wake-up call for our societies. The idea of the New World Order has definitely failed and the old certainties of the bipolar world were gone.

At the Summits of Wales and Warsaw but also in Brussels last year, the North Atlantic Alliance decided to embark on a very impressive adaptation, beyond expeditionary approach it decided to reinforce its collective defence. Those Summits also underlined the importance of the enhancement of the EU-NATO cooperation. Both organizations actually jointly agreed on a set of more than 70 actions, in seven different domains, among which hybrid threats, cyber security and defence, defence capabilities, defence industry and research but also exercises.

And in June 2016, European Union issued its Global Strategy for the EU’s Foreign and Security Policy, determining new priorities and defining new tasks in the field of security and defence. The Global Strategy, that strategic document, also underlines that the EU needs to do more and better for its own security and achieve more autonomy of decision and action. So, this document opened up the path for new ground-breaking initiatives.

Permanent Structured Corporation (PESCO) that Belgian already promoted in 2010 during its presidency and Coordinated Annual Review on Defence (CARD) where both launched to foster the EU defence cooperation. The Commission came up with its very promising European Defence Action Plan (EDAP) giving birth to the European Defence Fund (EDF).

Time has indeed come to strengthen European Defence Industrial and Technological Base in order to address capability gaps, shortfalls through multinational projects by European industry. And I would like to stress here that these developments for more EU defence, address a very legitimate European inspiration that is shared by many majorities of voters. But this being said it is wrong to say these initiatives could undermine the transatlantic security framework by discriminating or even excluding potential third partners.

On the contrary, Belgium believes and is convinced that a stronger Europe with a more integrated defence makes NATO stronger. European efforts in the field of security and defence will indeed be beneficial for both the EU and NATO. Let’s take military mobility for instance, which is a striking example. This PESCO project, involving all participating Member States can benefit from financial support of the Commission through the Trans European network or TEN-T project, which could finance dual-use civilian and military transport infrastructure. This will allow a faster and more efficient transportation of transatlantic military means through Europe in case of troops reinforcement   on our continent. And as a historical and geographical transit country, Belgium is fully involved in this endeavour.

Still, on transatlantic defence cooperation much more has to be done. Hybrid threats, disinformation, cyber and new technologies, climate change as well as the challenges of a more competitive multipolar world require common understanding and a common approach. Multilateralism is in the DNA of the Belgian Foreign Affairs, the challenges we are facing are beyond the grasp of any single nation, even the biggest one. Solutions have to be found together.

Against this background Belgium wants to put forward the importance of a strong and reliable transatlantic cooperation.  Understanding the rationale behind the current limitations, we feel that it’s high time to involve more and better the Member States and the Allies.

Furthermore, we need to evolve from pure coordination to actual joint approaches. EU and NATO have the tools to strive to these objectives.

So, ladies and gentlemen, I want to conclude my intervention by saying that I’m convinced that this conference too will contribute to this noble cause. So, I thank you for your attention and I wish you very fruitful summit.