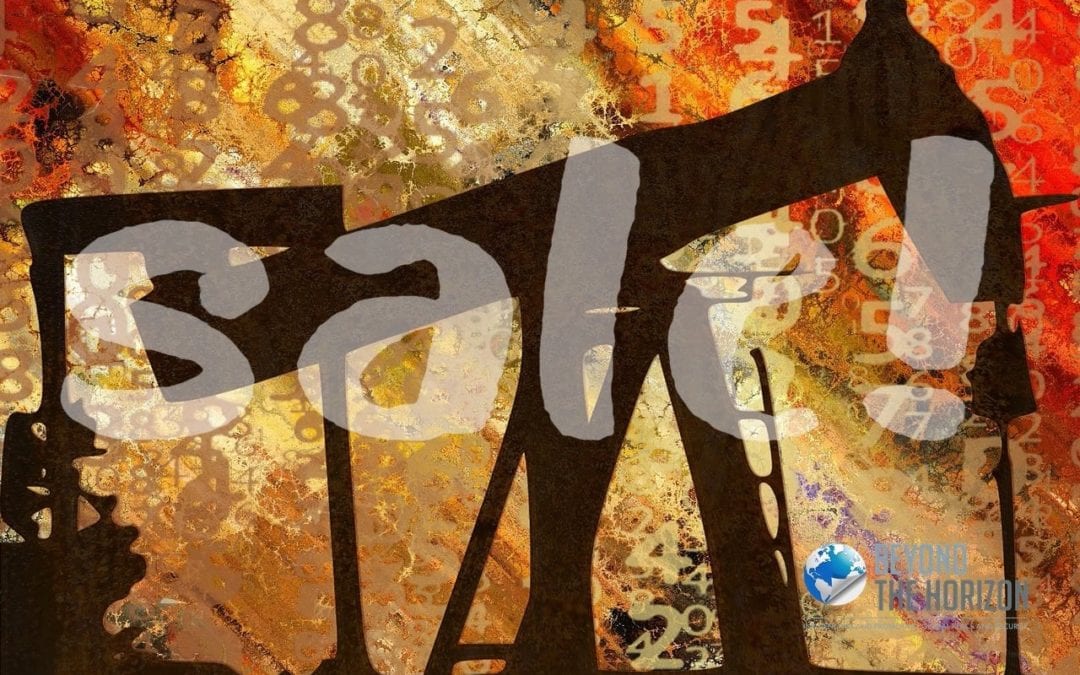 April 20th, 2020, was a historic and shocking day for oil investors as West Texas Intermediate (WTI) went below zero for the first time in history. This more-to-follow crisis was highly expected as indicated in my previous commentary. It’s a common view among not only scholars but also average consumers that diminishing global demand due to novel Coronavirus (COVID-19) in historic numbers and lacking proper coordination among producers, despite earlier announced OPEC+ agreement, enabled this fresh crisis to transpire. Bearing in mind that, the main problem with historic speculative collapse in WTI is actually caused by lack of adequate storages to store its oil for May Futures Contracts expiring on April, 21st. While things were little smoother and more positive next day just prior to the termination time, it was already worrisome enough for the investor behaviors.[1] 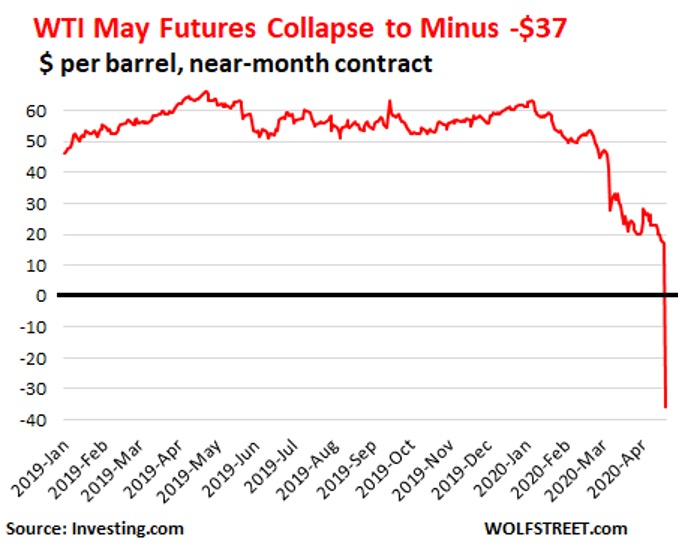 It might have been considered as a temporary shock in a rapidly changing, manipulative oil market among traders. Stock markets and equities do fluctuate in enormous amounts during COVID-19 crisis and these rise or falls create opportunities as well as threats which could end up with bankruptcies such as WTI May Future contracts crash %74. However, another Brent crude oil crisis is looming and this may have much more severe results compared to the WTI contango as it is much more ubiquitous than any of its peers. As Brent crude prices slumped to the lowest since 1999, the market losses coincided with excessive production in contrast with sharp decline in demand. This might have looked like a geopolitical rivalry as WTI is more common and benchmark in oil pricing in America and Brent is in North Sea and Europe, yet the oil collapse fear still exists pretty largely. Though Russia was reluctant to admit an OPEC+ agreement previously and targeted US Shale industry in the first place, it seems to have realized the possible mistakes it made. Russia is now in talks of new cuts in oil production together with Saudi Arabia. These short term outcomes could hurt Russia’s economy as Finance Minister claimed 1 trillion roubles ($13.44 billion) of additional borrowing this year to cover the shortfall in non-oil and gas revenues. This shortage shows how contradictory the previous messages given by Russian authorities were in terms of Russian economy’s strength. Sharp decrease in the oil prices will put more pressure in OPEC countries economies and might create possible budget deficits, yet this might not be a massive influence for US as its economy is not directly affected by oil sector. However, US government elucidated they were considering taking US equity stakes in US energy companies as a measure to support suffering oil and gas companies. 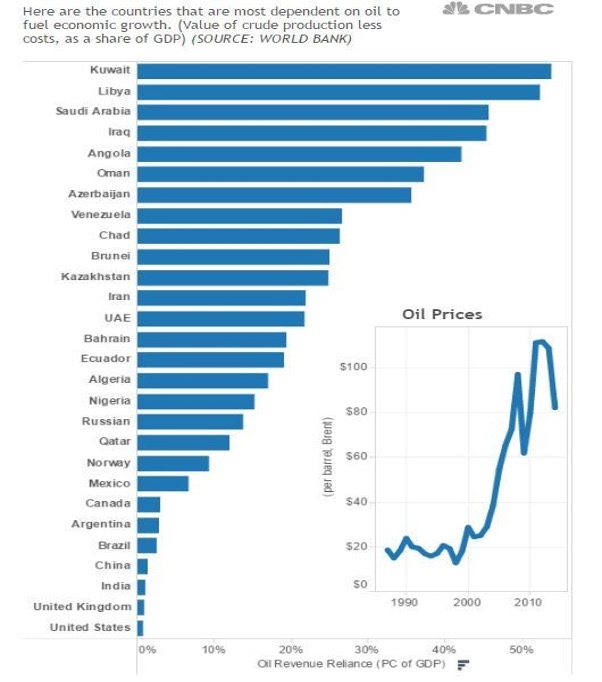 Back in history, so-called “Nixon shock” was a series of economic measures started the abandonment of Bretton Woods system for US. This progress concluded the convertibility policies of dollar (USD) based on international gold standards with transformation into petrodollar system, in which oil producing countries are paid in dollars. The plunging oil prices elevated the concerns about the fragileness of USD as the world’s reserve currency. It may be quite early to remark if China will come front with a Petroyuan idea yet, nonetheless, this fantastic notion is thrilling for the investors expecting a gold-backed digital currency.    Meanwhile, Asian countries such as Indonesia, Hong Kong, China or India seems to enjoy the fall in oil prices. China is struggling to reopen the economy as freshly relieved from COVID-19, but the deteriorating economy in the rest of the world is causing deflationary panic and unemployment statistics are on the rise and more demand and supply shocks are expected to come. 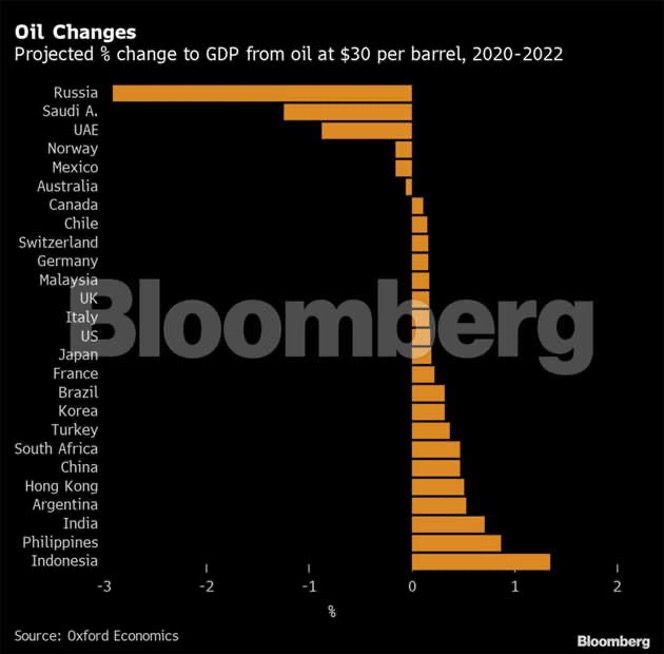 In 2014, the United Kingdom had production costs of $39.20 per barrel ($247/m3), Norway had a production cost of $13.30 per barrel ($84/m3) and Denmark had a production cost of $12.10 per barrel ($76/m3). These were minimum numbers required to avoid any budget deficit back in then. As the uncertainty lasts in supply and demand correlation, the further burden will be felt on Europe and markets. Even though, these numbers might have been changing by time, the climate change activists were speculating we could have started witnessing the big oil collapse earlier. Just like United Nations (UN) put into its agenda “2030 Sustainable Development” in 2015, Saudi Arabia published 2030 Vision, s strategy to wean Saudis off its reliance on fossil fuels. But COVID-19 has now been forcing nation-states to take action earlier than expected and oil-wells and refiners shutdowns might be on horizon. Plummeting oil prices are to blame for even fresh Iran-US tensions as US President Trump tweets orders to “destroy” Iran Navy. Analysts speculate that this argument might be used to surge the falling oil prices amongst more global actors as well.

*  The instabilities in the markets with fast-changing oil futures contracts prices will purportedly keep being speculative for the investors.

*  While Russia needs an oil price around 40$, Saudi Arabia desires approximately 80$ centered on %90 percent of export earnings, these plummeting numbers will pose a direct threat to both countries’ economies as an unswerving result equally the COVID-19 lasts.

* Saudi Arabia and Russia new deal in cut of the oil production would come as no surprise, considering sharp decline in global demand as a wider dialogue might be expected as well to avoid further losses.

*  US considering to buy energy sector equity stakes may open a new page in US economics history solely based on free markets: Nationalization.

*  US may threaten to impose tariffs for oil imports even if the outcome is still very skeptical since the import numbers are very little from not only from Saudi Arabia but also Russia.

*  Rising tensions between US and Iran might cause temporarily surge in oil prices. However, Middle East is notorious with decades of wars for oil. Heavily oil dependent economies might strive to keep the oil prices at all costs with or without proximities.

*  Even though some recoveries are in horizon for WTI June Futures, the unpredictability of novel COVID-19 duration and economic outcomes will still keep posing risks to the global economy and more oil industry shutdowns are chiefly expected.

*  While USD seems to keep up dominating as world’s top reserve currency in the world, the collapse of petrodollar system might cause further political and economic tensions among nation states.

*  Credit risks are seemingly going to be major issues for oil industry and there is a reasonable expectation of default for certain amount of countries such as Bahrain, Dubai etc.

*  Even though it’s not a secret that US President is not a big fan of climate change and left out it from 2021 budget, waning global oil consumption will putatively push climate action harder.

*  As the most conventional zero-sum game instrument, the longer the reopening of global economies stay dubious, the tougher measures will expectedly be taken as long as a global dialogue is delayed.

* Non-Resident Fellow at Beyond the Horizon ISSG

[1] Oil contracts are arranged on a monthly basis between supply and demand sides, which can be highly speculative for investors. A lack of storage space drove the front-month Nymex WTI futures contract to negative territory for the first time ever on April, 20th.