Oil Politics During the Corona Outbreak

Corona virus has started affecting a large extent aspect of our lives, particularly in social and economic fields, of which this unprecedentedly fast-spreading novel virus seems to surge dramatically and worsen the situation for unpredictable amount of time. Yet, there seems to appear a new dimension of this ongoing global turmoil which does not necessarily have to be the primary issue, however may cause global conventions which have been in effect for really long to come to an end. This will briefly outline the future of oil and energy politics inclusively.

On March 8th, Saudi Arabia and Russia started an undisclosed oil war and the prices fell down sharply which triggered an extraordinary fluctuation in almost entire stock markets or commodities and FX markets all round the world. US oil prices falling by 34%, crude oil falling by 26%, and Brent oil falling by 24% shocked the investors worldwide hinting a new chapter is about to begin, in fact might cause an economic crisis as a result of supply and demand shocks followingly. Likewise, this situation seemed to be giving contradicting messages in oil markets as West Texas Intermediate (WTI), a famous crude oil benchmark, fell around %20. This resulted massive losses in S&P500, Dow Jones and global markets, increased the Dollar Index (DXY) and gold prices. 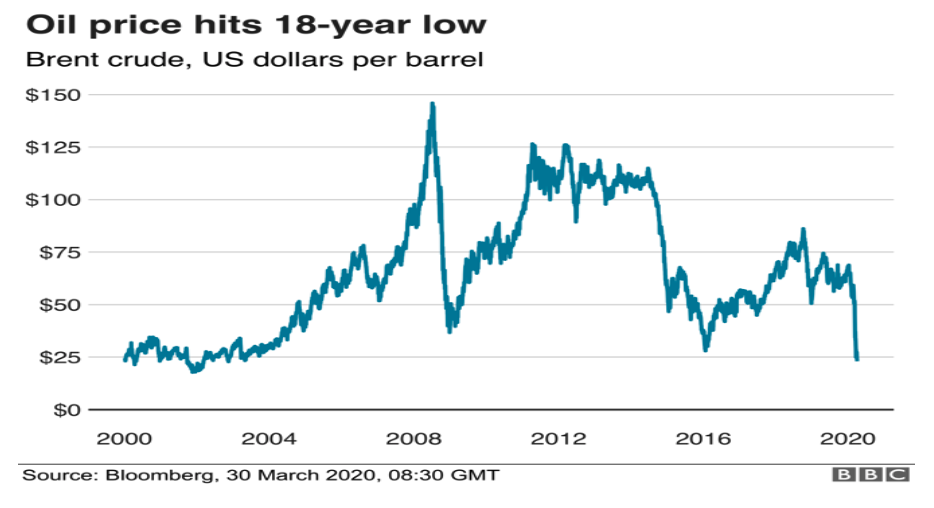 Because cut production proposal in OPEC+ meeting was rejected by Russia last month, the collaboration in oil markets has been suspended and this exacerbated the entire economical and energy segments as a result of well-known domino effect. US President Mr. Trump, however, held a meeting with his country’s oil moguls in White House last week and he personally tweeted to mediate in this discussion between Russian and Saudi leaders. Nevertheless, in accordance with US Anti-Trust law, the oil market in US is acknowledged as a free market and prohibits any outsider intervention.  A meeting is expected to be held on April 9th, even though an agreement would not be a surprise for the world, nonetheless Saudis and Russians have already been widening the arguments and that raises the concerns for the future of oil, energy practices and economic outcomes prior to the meeting. G-20 Energy Ministers decided to hold a meeting on the next day as well signing positive first impressions. 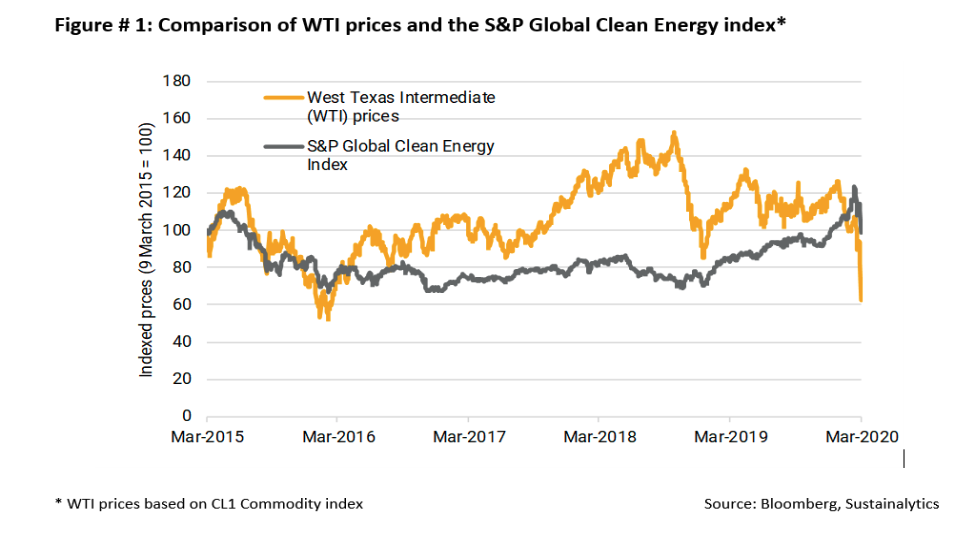 The price war was a result of the fragmentation in dialogue between the Organization of the Petroleum Exporting Countries (OPEC) and Russia over proposed oil production cuts in the midst of the novel corona virus pandemic.  But the deteriorating discussions among world giant countries tip-off that the Corona virus is generating a sophisticated world-scene, raises concerns and whether the current global order is still sustainable. Although, it’s the very first country where the novel Corona virus appeared, China is resuming the production and indisputably enjoying the cheap oil. Russia is a country where the main income is oil and now unhappy with a price less than 45$ ppb, mischievously targeting US Shale Industry by turning over the table with OPEC countries and seemingly not enjoying how the table is set.

Being caught in the middle of an already deteriorating economic conditions, the Emerging Markets (EMs), seem to experience the shortage of liquidity hardest, explicitly greenback, considering approximately 83 Billion $ cash outflow during March. FED declared to implement printing money policies for which they would use “full range of tools” in order to stimulate the US economy and minimize the effects of corona virus crisis. EU has also been in discussions for possible solution alternatives targeting principally households, businesses and the remaining parts of the economy as a result of the challenging situation the corona virus created. Head of International Energy Agency (IEA) Mr. Fatih Birol also announced “”Oil price collapse is bad for consumers too. Refining and retail industry risks losing 50 million jobs worldwide.” World economies are largely affected by the lockdowns, stay-at-home policies and social distancing measures and world’s biggest factories are also being closed gradually and that presumably instigates the demand and supply shocks. 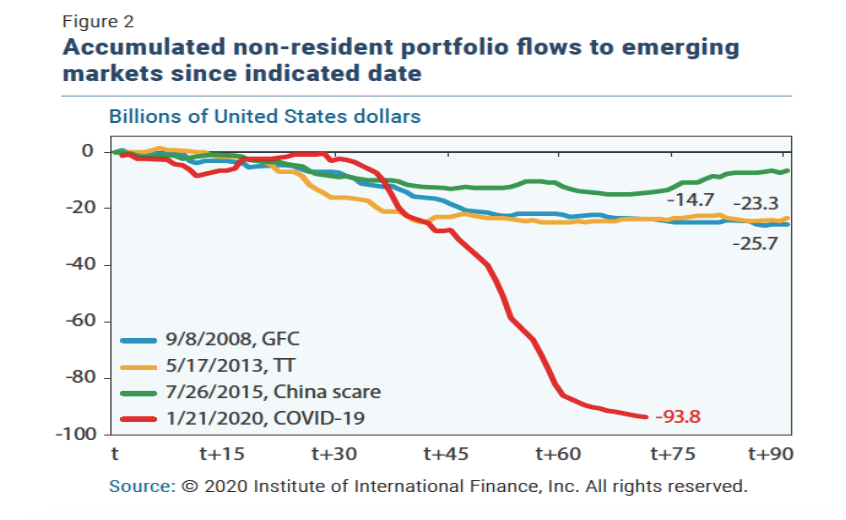 As famously quoted by Clemenceau “A drop of oil is worth a drop of blood.” is believed to be the invisible motive for the 1st WW behind the scenes and the renditions of nation states have been no different verifying this during the 19th century. The nation states, precisely the developed ones, have been ceaselessly seeking for new technologies in addition to new innovations in order to maximize their oil resources which would allow them to stimulate their economies and gain profits. These unstoppable initiatives exercised by sovereign governments and their ruling elites have been exploiting the natural reserves in all around the world for ages. The growth and development rivalry amongst the nation states might be on a collision course this time.

The world economies are caught in liquidity shortages such as EMs, so how would this effect the oil markets and the future of world energy and finance? Can this be a dangerous opportunity popped up out of the blue in our lives for a transition to a cleaner energy usage? Keeping in mind that quantifiable effects of the novel Corona virus are not known yet, although many countries have been working diligently in order to develop a vaccine so far, the validation is expected to take at least 12 months. As the Corona chaos aggravates, the moves on global chessboard consisting the oil sector players will doubtlessly continue and make the situation poorer by time. The waning conditions in the world economies and power struggles might have unforeseeable outcomes if the virus effects stay for longer than expected, exceeding the 3rd and 4th quarters of 2020 fiscal year. The demand will historically diminish, and the amount of the time needed to repair and restart of traditional ways of economies stays unknown, a chance for a paradigm shift with regards to the renewables and create a sustainable future might be possible. These seemingly idealistic views deserve to be discussed remembering a new world order will arise as largely expected in the post-Corona term and “climate change” will be unavoidably part of this discussion. But are we ready for such a massive change in terms of the expiration of the global industries working with fossil fuels? Or is this realistic approach to expect such a radical change in such a short time although preferably renewables such as sun, wind, geothermal etc. are much eco-friendlier? The answer seems confusing since world is much more interdependent nowadays, on the other hand, populism runs dominance in the nation states building walls in the borders and attacking multi-national NGOs. However, corona virus is giving humanity a good lesson and one needs to understand that, in the long run only accurate instrument for the correct answer will be science.

*Non-Resident Fellow at Beyond the Horizon ISSG