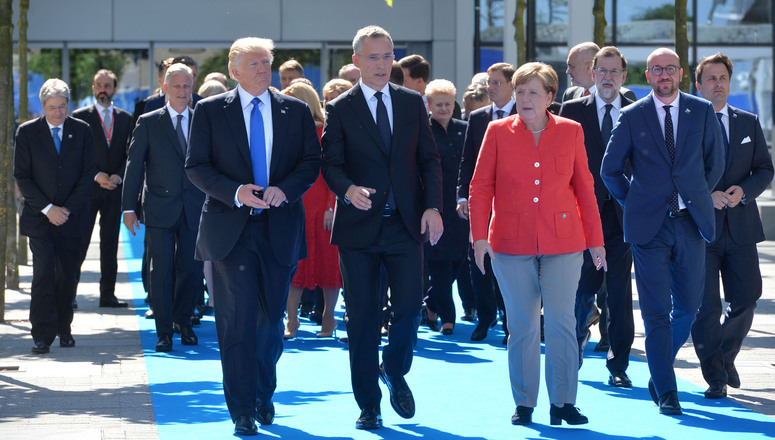 On 25 May 2017, NATO leaders met in Brussels to celebrate the opening the new headquarters in Boulevard Léopold III. The location of the new headquarters is historically very significant: during construction four unexploded bombs from both the First and Second World Wars were found underneath. This should serve as an excellent reminder for what NATO stands.

While the official opening ceremony was a good occasion for the heads of state and government to come together, one issue – or rather, the presence of one person – surpassed the significance of the meeting: it was the first visit to Brussels by the 45th President of the United States of America, Donald J. Trump. Prior to the NATO meeting, much debate surrounded his visit. The stakes were high, because NATO has to face international disagreements and challenges as well as external threat that require urgent responses. As Sophia Besch, Research Fellow at CER, has outlined the task for the European allies was to contain Trump and to convince him about their efforts and contributions to NATO. On the other hand, Jeremy Shapiro, Research Director at ECFR, gave a more sober outlook for the meeting: ‘Trump will give an ordinary speech, make various extravagant promises, and the meeting will pass with neither incident nor substance.’

Besides the opening ceremony, the thematic focus centred around the issue of burden-sharing among NATO allies. Already during previous meetings with allies, Trump emphasised that European countries owe his country vast amounts for paying for European security. In one of his Tweet storms, he summarised his claim after the meeting with German Chancellor Angela Merkel in April 2017: ‘Germany owes vast sums of money to NATO & the United States must be paid more for the powerful, and very expensive, defence it provides to Germany’. At the 2014 Wales Summit, NATO allies already agreed on the target of 2 percent of GDP towards NATO defence. However, this target is not only far from realistic and appropriate for some nations. It could also spur new suspicions, especially in Europe. If one imagines that Germany met this target any time soon, as of current, 2 percent of its GDP would amount to $75 billion (€67 billion, £58 billion). Surely, some of its neighbours would become worried.

In addition, this approach to burden sharing does not reflect the actual needs to make the Alliance more flexible, responsive and overall more secure. It is acknowledged that a contribution to collective defence is vital for its survival. But the 2 percent goal does not measure well the actual needs. Instead, it is suggested that a more accurate measure of both burden and risk sharing is required. The more worrying problem is not how to meet this target, but how the money is spent. For a robust and capable Alliance, its members should focus on acquiring capabilities reflecting the current security environment, i.e. one that requires tools and capabilities that respond to cyber threats and hybrid warfare. Further, they should focus on creating deployable militaries that can contribute effectively to NATO’s major operations. Lastly, allies’ contributions to burden sharing should take into account a country’s overall contribution to international and Euro-Atlantic security, i.e. its participation in non-NATO security and defence frameworks.

The outcome of the NATO meeting last month the recommitment of the allies to the 2 percent target as well as the decision to join the counter-terrorism coalition against Daesh. NATO leaders agreed on an action plan enabling states to participate in the fight against terrorism through the coordination of training and capacity building. Yet, as stressed by Secretary General Jens Stoltenberg, this would not translate into engagement in combat operations.

Despite the importance of the meeting and the allies’ recommitments, NATO leaders neglected one pressing issue. How will they deal with one of their members – Turkey? Prior to the meeting in May, clashes between Turkey and other allies, most outspokenly with Germany as well as Austria, which is one of NATO’s partners through the Partnership for Peace programme, have troubled internal politics within the Alliance. Since the slash over campaign visits by Turkish officials in the light of Turkey’s referendum, German-Turksih relations have been tense. Then, for the second time within one year, Turkey has denied German officials access to the air base in Incirlik. These internal troubles and scuffles indicate the incoherence and diminished trust among members. Though both Germany and France voiced complaints over Turkey’s recent behaviour during the meeting, these have not received much attention and have been pushed into the shadow of Trump’s limelight appearance.

It has long been argued that NATO is only a defence alliance. Yet, with its transformations in the last three decades, it has become a truly political organisation as well. In this regard, NATO has to step up and improve its internal coherence alongside its defence capabilities. Only in a joint and collective fashion it is able to face its external threats and security challenges. It is therefore at stake and in the hands of NATO leaders as well as the Alliance as a whole to come together and revive common interests and values. This is far more significant and pressing than to denigrating and pointing fingers at each other as well as more important than shining light on those allies whose current policies and statements have been vague, ambiguous and not very trustworthy.