Hybrid threats through the prism of the illegal occupation of Crimea 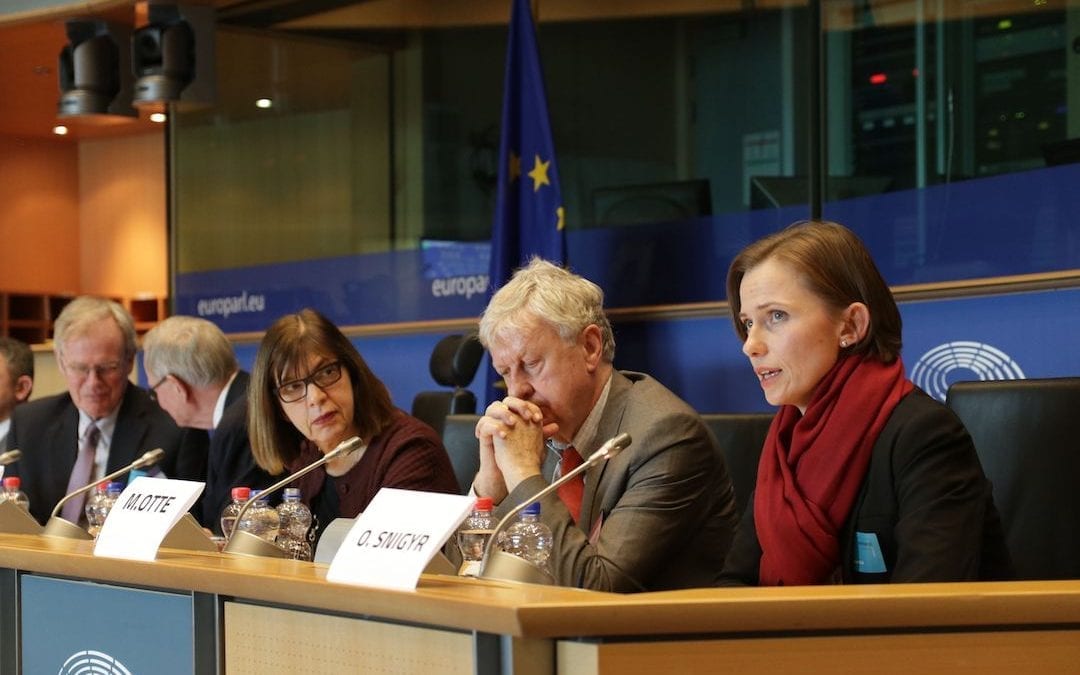 The distance – physical and psychological distance of many European capitals from Crimea dwarfs the sense of danger many Europeans tend to feel about the annexation of Crimea. Despite the fact that Crimea is a part of natural-Mediterranean – Black Sea security area and everything that happens there directly impacts European security.

In the dimension of conventional security Crimea has already become an instrument of further Russian military expansion. Since illegally annexing Crimea in 2014, Russia has drastically increased its military presence in the Black Sea region. It is fair to say that Russia boasts military control over the region.

As was outlined in the analysis of Ruslan Minich, published at the Atlantic Council, Russia has been creating an anti-access/area denial (A2/AD) zone over the Black Sea that will allow Kremlin to deny other countries’ access and free movement in the region. The A2/AD zone today already includes several elements: coastal defense systems with anti-ship missiles and air defense systems using advanced anti-aircraft missile systems. With its capabilities allocated in Crimea Russian military forces can threaten most of Europe and the Eastern Mediterranean, as well as part of Central Asia and the Middle East. An integral part of establishing the anti-access/area denial zone is electronic warfare thus allowing Russian reconnaissance assets in Crimea to monitor NATO ships in the Mediterranean.

Within four years, Crimea has turned into a giant military base. The number of the soldiers has risen to 32,000, aiming to reach 43,000 by 2025, the number of aircraft – to 122, warships – to 71, long-range surface-to-air missile systems – to 16, and up to seven submarines are now docked where there had been none before. To date there is still no evidence of the presence of Russian nuclear weapons in Crimea.

As soon as there is no access of international organisations to the territory of the occupied Crime and thus no monitoring, international community cannot be assured of the nuclear-free status of peninsular in future – some weapons in Crimea are capable of carrying nuclear warheads and Russia is upgrading facilities that housed nuclear bombs prior to 1994.

In launching its military campaign against Ukraine 5 years ago, Russia violated more than 400 bilateral and multilateral agreements and fundamental norms and principles of international law. Russia is also conducting legal warfare that uses Crimea as an instrument. As it has been outlined by Dr. Olexander Zadorozhny – a legal scholar at the Taras Shevchenko National University of Kyiv in his book “Russian Doctrine of International Law After the Annexation of Crimea” – since 2014 Russian lawyers have been shifting their interpretation of the fundamental regulations and principles of international law, especially concerning issues of territorial integrity, the inviolability of borders and national self-determination. And as James R. Holmes points out in his article “Goodbye Grotius, Hello Putin” – “much like its attempts to create an alternative political reality in its neighbourhood, Russia is trying to bring an alternative legal reality into existence in which strength and power trumps equal standing before the law”.

The security system based on law and trust has almost been ruined. The downward trend began when European democracies agreed to the compromise of combining the systematic human rights violations by Russia with its full-fledged membership in the Council of Europe, and continues with the insufficient reaction against the Moscow’s aggression against several independent states in its neighbourhood and Russia’s de-facto occupation and annexation of some territories (in Moldova, Georgia and Ukraine). Russia never experienced any serious consequences for the violations of its own commitments. This dangerous trend is now escalating via the violation and derogation by Moscow the basic principles of international law, the worst part of which is happening in the sphere of international maritime law.

With the military blockage of the Kerch Straight and the resulting de-facto blockade of two Ukrainian ports on the sea of Azov, Russia violates both the UN Convention on the law of the sea and the 2003 Ukraine-Russia agreement on the Sea of Azov. Russia’s provocations in the Kerch Strait, in the Sea of Azov, and its aggression in the international waters of the Black Sea aren’t just a challenge to Ukraine. As James R. Holmes mentions in his article, Moscow is seeking to resuscitate the closed-sea doctrine and has sympathisers in this intention among ambitious international actors. If Russia and China succeed in extending their sovereignty in the Sea of Azov and the South China Sea, it may put freedom of navigation in other parts of the globe under risk.

In the strategy of expanding their areas of geopolitical control, Russia as well as China use infrastructure and engineering works present in the waters of the targeted seas. China has built artificial islands for its military purposes. Russia has constructed a bridge over the Kerch Straight and uses seized Ukrainian offshore oil platforms near Odesa for military intelligence operations. We also have to be aware of the possible dual-use of gas underwater pipelines both in the Black Sea and in the Baltic Sea.

In the sphere of non-material values – democracy, human rights and the rule of law is the most vulnerable in the face of hybrid threats. Basically – these are the doors of hybrid war. Compromise is an indispensable part of international politics and diplomacy, but compromise between Russia and Europe at the cost of European values is harmful for Europe itself. This kind of compromise has a long-lasting and damaging effect on the resilience of the European institutions, organizations, and states. The logical consequence of Western pliancy is Russian movement forward in further testing its limits – e.g. the military aggression against Ukraine, intervention, occupation, and the illegal annexation of Crimea.

The sad fact is that today’s processes in occupied Crimea demonstrate the inability of existing international organisations and institutions aimed at the protection of human rights to contain the expansion of human rights violations and lawlessness in Europe. Crimea has become a “grey zone”, a territory that international organisations with a mandate to protect human rights (UN, OSCE, Council of Europe) cannot access despite the fact that the mandates of UN and OSCE missions extend the territory of Crimea.

The occupation of Crimea and Russian aggression against Ukraine in general and especially the recent aggression on the sea brings into sharp focus a slew of new hybrid threats.

Firstly, we have to mention the engagement of an international organisation and some European politicians by Moscow in pursuit of the “normalization” of the illegal status of the occupied Crimea. In 2014 the Red Cross Society of Ukraine declared that the operation of the Russian Red Cross in Crimea, seizing the property of the Ukrainian Branch of the Red Cross, broke the statutes of the Red Cross and Red Crescent international movements.  There has been an absence of a reaction from the International Committee of the Red Cross on this issue. The ambiguous legal status of the Russian Branch of the Red Cross in Crimea demands a reaction from this global organisation.      This silence can’t be accepted as something normal, and a selective approach of sometimes helping and other times ignoring the victims of Russian repressions in Crimea cannot be accepted.

Since foreign visitors of Crimea are legally responsible only to Ukrainian civil law, they may consider financial blandishments from Moscow more convincing. Still, those European politicians who take such a decision are responsible for the whitewashing of the repressions of the Russian occupational regime in Crimea against Crimean Tatars and Ukrainians as well as Russia’s military aggression on land and sea.

Secondly, we are aware of Russian tactics of “low level” terrorist activities. Repressions against Crimean Tatars and Ukrainians are conducted with the aim to make people leave the territory of Crimea. The result of this Russian policy of terror is an increase in fear and insecurity, and a feeling that the efforts of imprisoned Ukrainian citizens and their supporters are futile, as well and psychological and emotional violence against those who are expecting to be arrested. Meanwhile, Russia is implementing a program of the resettlement of Russian citizens in Crimea. Today around 50,000 people from Russian territory have already been resettled in Crimea. Of course, such an occupational demographic policy delegitimises any future seemingly “democratic” procedures and processes on that territory.

Thirdly, the Russian policy of repression, detention, and imprisonment of Ukrainian citizens has reached the status of mass repression. Today we can speak about more than 100 illegally imprisoned Ukrainians on the territory of Russia and in the occupied Crimea. According to the reports of the human rights organisations in Ukraine there are about 400 Ukrainians detained on the occupied territories of the Eastern Ukraine. Russia has been blocking the process of releasing hostages and political prisoners, and says openly that it will block all initiatives and is waiting for a change of power in Ukraine. Thus, Russia has introduced a new instrument in international politics – the use of foreign political hostages on a massive scale.

In this context a very special role belongs to the 24 Ukrainian seamen, captured by Russian navy in the international waters of the Black Sea on the 25th of November, 2018. With its aggression on the sea and its detention of the Ukrainian seamen Moscow is now testing the international reaction of its violation of the UN Convention on the Law of the Sea and the Geneva Convention of 1949 relating to the treatment of prisoners of war. The European Union has reacted with the “Azov package” of sanctions, with a list of the 8 individuals that carried out the orders to attack the Ukrainian ships, but none of those who made these orders. Russia’s refusal to release the Ukrainian seamen shows that the EU’s reaction has more symbolic than effective. While Russia continues to test the limits, other states shift from watching to following, in the South China Sea today, in the other seas around the globe tomorrow, suffocating to death the freedom of navigation.

*Olena Snigyr, Chief analyst of the Center for International studies of the Hennadiy Udovenko Diplomatic Academy of Ukraine of the Ministry of Foreign Affairs of Ukraine