Disruptive Technologies: Either a Threat or an Opportunity but Definitely an Obligation 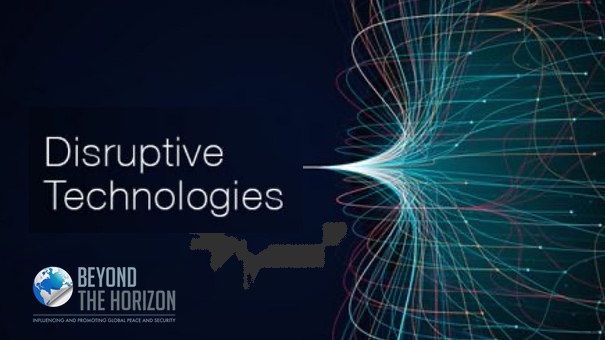 Disruptive technologies are constantly changing the way we fight. The fast pace of technological change is making it hard for the militaries to keep up. In his seminal article “The New Revolution in Military Affairs,” Christian Brose predicts that emerging technologies such as AI, autonomous systems, ubiquitous sensors, advanced manufacturing, and quantum science will transform warfare radically.

Drones, for example, have become a tool in the arsenal of non-state actors. A recent drone attack to Saudi Arabia’s Abqaiq and Khurais oil treatment facilities which claimed by Yemen’s Houthi rebels caused 50% decline in Saudi oil production. The day after, the oil price spiked with its most significant one-day jump since the 1991 Gulf war and rose 20%. Allegedly, a swarm drone attack took place on 31 December 2018 reportedly took out seven Russian warplanes, the biggest Russian loss of military hardware in Syrian theatre.

Boston Dynamics, a spin-off from the Massachusetts Institute of Technology, is producing robots acting like humans or animals, performing real-life duties. It is highly likely that they will replace GIs soon and operate in non-permissive environments, including air, space, and underwater.

More sophisticated and secure encryption algorithms will be possible by using quantum computing. Relatedly, 5G technology will make it possible to transfer vast amount of data, unprecedented to the past, which will redefine C2, how we command and control the force. C4ISR integration through distributed networks will make combatants more resilient and responsive.

3D printing has the potential to ease the logistics burden of the armies by timely providing spare parts at or near the point of demand quicker and cheaper than conventional logistics systems.

Near-peer competitors Russia and China are among the frontrunner nations that invent, use, and sell disruptive technologies. The first draft of Russia’s national AI strategy gives clues about the country’s aspirations in this particular domain. The (draft) AI strategy urges relevant stakeholders;

·        to develop national standards for testing, certifying, and confirming compliance for AI systems,

·        to create online repositories to collect, store, and process scientific data, including for training AI algorithms,

·        to develop AI-ready microprocessors that run faster and use less electricity,

·        to create A unified AI open learning platform for all educational levels and a secondary AI vocational education system,

China’s 2019 Defence White Paper states that “the application of cutting-edge technologies such as artificial intelligence (AI), quantum information, big data, cloud computing and the Internet of Things is gathering pace in the military field. International military competition is undergoing historic changes … War is evolving in form towards informationized warfare, and intelligent warfare is on the horizon.”

China is using facial-recognition and advanced surveillance technology to repress religious and ethnic groups via its so-called social credit system.

NATO has practical and well – established tools fit for purpose. Science for Peace and Security (SPS) Programme promotes dialogue and practical cooperation between NATO member states and partner nations based on scientific research, technological innovation, and knowledge exchange. It responds and adapts to the changing security environment to support NATO’s strategic objectives and political priorities. SPS key priorities include;

·        Innovative energy solutions for the military,

·        Methods and technology regarding the protection against, diagnosing effects, detection, decontamination, destruction, disposal and containment of CBRN agents,

Through its Innovation Hub, which is the engine of NATO Innovation Network, NATO tackles some of the challenges it faces, which includes;

·        Study on future implications of increasing autonomisation in defence capability,

·        Identifying the trends that shape the future strategic context and derive defence and security implications for the Alliance to 2030 and beyond.

Disruptive technologies within the EU is also gaining interest.  EU’s AI strategy, dated 2018, aims at increasing public and private investments to at least €20 billion annually over the next decade. The Commission is taking a three-step approach;

·        Launching a large-scale pilot phase for feedback from stakeholders,

Ethical concerns also arise. Full or partial machine control over decision making, targeting humans with autonomous systems, deniability by non-human intervention and tailored action that keeps the aggression under the threshold of war, dual-purpose technologies that transform daily gadgets into killing machines are among them. The potential absence of human interference in future conflicts in which autonomous systems will likely be used to a certain degree might create problems regarding compliance with the Law of Armed Conflict. For example, the law requires a reasonable commander acting in good faith. Who will be responsible for the acts of autonomous systems when decisions are taken by sophisticated algorithms?

These technologies were once the subject of science fiction. However, they exist or about to exist today. Therefore, both sides of the Atlantic should cooperate if they do not want to go out of business.

* Samet Coban is analysts at Beyond the Horizon Int’l Strategic Studies Group.