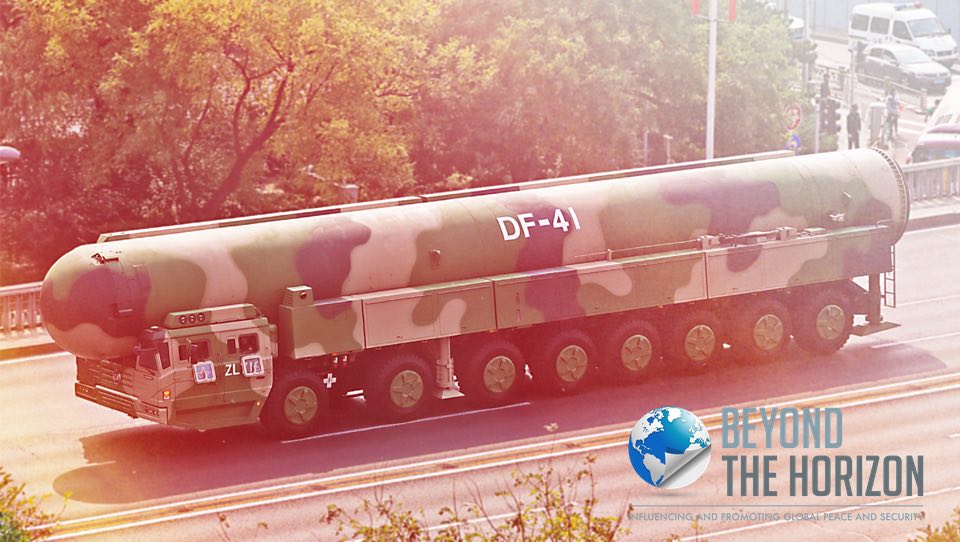 As other countries are also working on next-generation missiles, China is pursuing a long-term strategy in order to build strategic technologies and bridging the capacity gap with the West, following Russia’s approach.

Currently, the most powerful Intercontinental Ballistic Missile (ICBM) has been developed in China. According to the Associated Press, the missile is considered to be the longest-range intercontinental weapon in the world and capable of hitting targets at a distance of 9,320 miles.

Most recently, the Chinese army has shown off a new hypersonic nuclear-capable missile designed to overhelm the missile defense system of the U.S. and its allies. On 1 October 2019, at least 16 Road-Mobile Dongfeng[1]-41 (DF-41) missiles and transports were on display during a major military parade to commemorate the 70th anniversary of the founding of the Chinese state-led by President Xi Jinping.

The DF-41 is a three-stage solid-fuel missile. The strategic missiles system design shows a mobile launch capability with greatly improved survivability compared to previous intercontinental missiles of China. It is supposed to have an estimated range of 12,000-15 000 km and carry up to 10 Multiple Independently-targetable Reentry Vehicles (MIRVs). US intelligence assessments indicate that the missile, if tests yield positive results, will be able to carry from three to ten nuclear warheads. Targeted range is sufficient to reach all regions of the United States, Europe, and Russia. Defense analysts believe that it will be capable of achieving speeds of up to 25 Mach and will take about 25 minutes from launch, for the DF-41, to hit its targets in the United States.

“China appears to be considering additional DF-41 launch options, including rail-mobile and silo basing.”, according to the 2019 Pentagon report. The DF-41 is still under development as a rail system. Rail mobile systems make it difficult to monitor missiles because trains are able to hide as passenger trains and travel at high speeds. 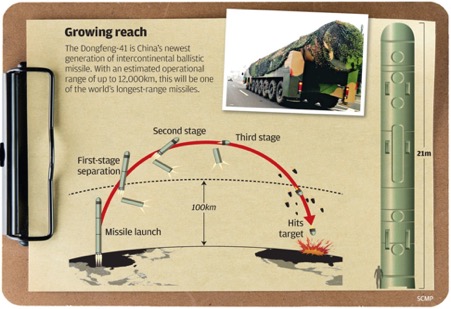 During this testing phase, China is still developing the DF-41; it has conducted several flight tests since July 2012, including a flight test with MIRVs in December 2014 and several launcher tests of the rail-mobile ICBM in December 2015. The weapon was tested for the fifth time in December 2015. In this test satellites monitored the launch of the missile and identified the use of two MIRVs. In April 2016, the missile was flight-tested with two dummy warheads for the seventh time near the South China Sea. The DF-41 was fired in the Gobi Desert in November 2017, two days before US president Donald Trump’s visit to China. There are sources reporting DF-41A was commissioned in 2016 or 2017 the first time. But it was not before 2019 that it was disclosed. As a result, the missile has been under testing phase for the past several years, and it will be highly likely ready to deploy as early as 2020.

As the DF-41 is desiged to be both road and rail system, and rail-mobile platforms can use both tunnels to protect themselves from satellites and provide secure storage for weapons, making it hard to verify the number of rail systems and the number of missiles. They also have the ability to operate autonomously in remote areas of China, which increases their difficulty in tracking and enhancing their ability to survive.

China is developing and increasing its nuclear, cruise, and ballistic missile arsenal. Given its range, launching method, and payload, the DF-41 presents numerous challenges for the U.S., Europe, and Russia.

With this everyday growing inventory, China increases the capacity to target critical C2 centers, aircraft carriers, airbases, and high-value assets within the mainlands of the US and its allies. DF-41, particularly has capabilities that will pose threat to US forces and could overwhelm not only US missile defense systems but also Europe, and Russia within a potential range.

* Dr. Aziz Erdogan, PhD is a non-resident fellow at Beyond the Horizon ISSG.