First, I will focus on the changes in meaning of borders for China and its political stance throughout the history. Then I will mention China’s approach to the European Neighbourhood Policy (ENP).

Neighborhood Policy in a way relates to a geopolitical border concept. In this context, to understand how China looks at the EU and the world, first we need to understand China’s perception of border.

In the past, China accepted itself in the center of the world. Figure 1 indicates the very basic diagram of Chinese ‘Jifu’ (tributary) system[1]. According to this system, China classified other countires by region and distance from its own center. Borderlands include the boundary areas in contact and those who take part in the tributary system. 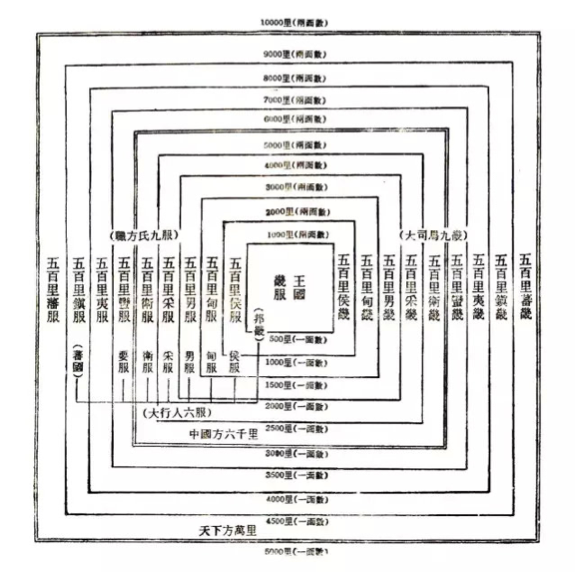 From the 3rd century BC until the end of the 19th century, it was a hierarchical network-like political order system. This system was often referred to as the treaty system or the colonial system and was one of the major international relations models in the world at that time.

The formulation of geopolitical strategy in ancient China was mainly thinking from inside out, and it was the central thinking. For instance, the Han Dynasty only focused on the bilateral relations between the Huns, without considering the influence of other countries or the surrounding geopolitical pattern. However, there were Four Barbarians for Han Dynasty, they yet mention and take into account only Huns, and evaluate the others as foreigners. And modern Chinese scholars[3] complain that this way of thinking still remains in the current geopolitical research especially for Belt and Road Initiative (BRI) researches. Domestic geopolitical research still mainly analyses China’s relations with neighbouring countries based on China’s interests, and there is less analysis of global geopolitical patterns. This may cause misinterpretation for China in future.

It was the ‘one-side analyses’ way of China. There is another aspect as how China’s international stance is today. As you know, China contemporarily experienced closed-door policy. And, socioeconomic damages occurred due to this policy. Today, China’s bureaucracy wants to expand their ‘opened door’ as Vice Minister of Foreign Affairs Luo Zhaohui said: “Today’s borders are no longer synonymous with remoteness and backwardness, but the frontiers for opening up to the outside world and the gateways to the development of strategies.” [4]

Apparently, China will keep doors open to international world. Furthermore, this time it will be more active. While after Qing Dynasty, it had a welcoming attitude by open door, but in this age, China will be going out from this door. We can see the evidences through the last initiatives.

Europe is the intersection of the “Silk Road Economic Belt”, the “Maritime Silk Road” and the western end of the BRI route system. The projects to be implemented within the framework of BRI provide China connectivity with neighbouring countries. So, the attitude of the EU is of great significance to the promotion of the BRI strategy.

China has several projects in the European Neighbourhood countries under the Belt and Road Initiative. The way the EU classifies its neighbours and cross-border countries (‘friendship ring’ or ‘geographic other’) will further clarify China’s attitude, which will cause the alienated regions to become closer to China. In case, China thinks that these regions are not marginalized, it will find a more comfortable area of manoeuvre. In the comments made so far, it is seen that China perceives ENP rather as a manifestation of an enlargement approach. Moreover, scholars mention ‘2004 enlargement of the European Union’ as “reconstruction of empire”. And they add “Today’s EU enlargement to the east is to a large extent the embodiment of empire clues, so it must be subject to the logic of the rise and fall of the empire—excessive expansion leads to “security dilemmas” … The “unity” hint has the potential to be a new historical paradigm that dominates the future of Europe, but not all historical hints that arise will disappear. The future of Europe is therefore filled with turbulence and uncertainty.”  [5]

Europe’s neighbours are a place for China to break its shell. In other words, Europe intends to control the boundaries that may flow to it like foam, while China intends to tie their nets to these feet and stabilize their region of influence. Statement of Xi Jinping confirms my opinion: “Returning the sea of the world economy to an isolated small lake is impossible and inconsistent with the historical trend.” “China’s door to openness will not be closed, it will only open more and more.” The report of the Nineteenth National Congress (2017) of the Communist Party of China proposed that “to promote the formation of a new pattern of comprehensive opening up, we must focus on the construction of the ‘Belt and Road’ and insist on both import and export”.

According to China’s new approach to the international relations, China will go on initiatives all over the world. Regardless of the progress or success rate so far, China’s initiatives will somehow give it the opportunity to fix its place.

Today’s initiative BRI has a difference with Ancient Silk Road. In the old history, buyers came to China and demanded products. The real beneficiaries of the Silk Road are middlemen. Yet with the initiatives in this century, China goes to the feet of its customers, created by investments and projects. In addition, the square diagram, which is a reflection of the old China’s management system, has been broken today. Water flowing through these fractures will be one of the things ENP will encounter on its routes.

China’s new rules and norms might mean a newly emerging alternative in these countries. Chinese scholar Ou Yangkang asserts China will lead a new world with a Chinese Type of Socialism. China wants to lead to the world modernization through the socialism that the BRI construction is an important and unique component.

Even though China was only a supplier in ancient times, it has still left deep traces in the world. China will surely have a lasting effect in the countries it has entered into with the investments. At least China will increase its existence in ENP areas through the initiatives.

Although the ENP report stated that this is the main goal of maintaining a boundary, as well as activating the relationship in these regions; some scholars in China will still consider this as the EU’s project to expand the borders, and try to use the donors in its sense of counter-attack. Perhaps the first example of this can be considered as BRI.

China wants to be more recognized in Central and Eastern Europe. This kind of initiative by China, is incomparable with the international attitude of ancient one. Today’s attitude is just like an effort to raise the baby quickly in the womb and deliver it hurriedly. It was an agricultural society, stability in the economic cycle, living conditions naturally led to the tributary system and subsequent closure to the outside. There were no major events such as the Renaissance and the Reformation in the late Middle Ages, and of course, they did not experience the process of changing from traditional to modern thought. In short, Chinese traditional political thought has a development path different from that of the West.

China is competing with Europe and not in immediate geography. This situation will push China to make more powerful attempts. While China expects to move more comfortably in neighbouring non-EU countries, she will also face EU activities and produce other projects to be more effective. Here I am going to put ‘border’ in a slightly different sense:

China is striving to break its shy (abstainer) attitude and take an interactive stance today, that is, expanding its boundaries in international relations by breaking its usual hard shell. The economy is not the only reason, it wants to take the credit for being a great civilization. Europe, on the other hand, strives to maintain its sphere of influence without disrupting its power.

I think that every entrepreneurial move of Europe, will be perceived by China as ‘my turn’ and will make China move further.

As in Sinocentric thought of China, since they are not physically and purposefully alienated from the existing lands, the places they will accept from now on will be the details to be built around this centre (Figure 2). 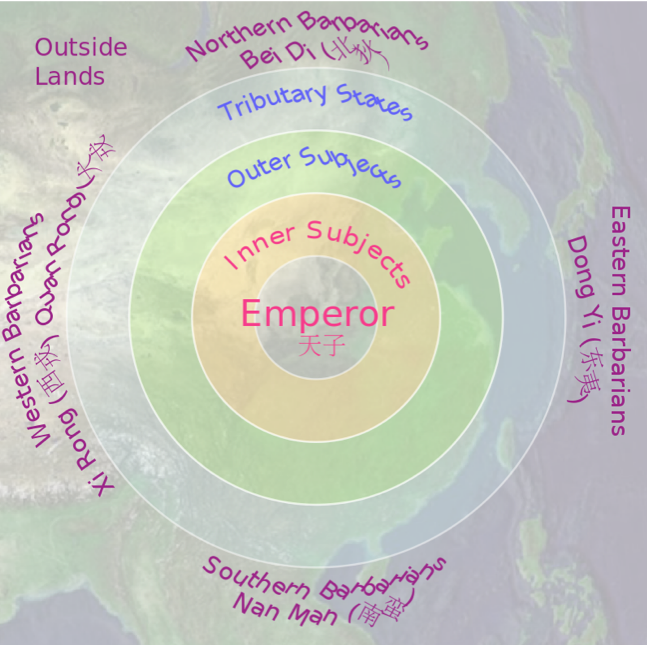 A flow started out from these break points. The BRI also remind us of the water arc in terms of the shape on the map. The water flowing through this arc extends into the interior of Europe today. Over time, we will observe that this water causes different reactions in different parts of the world. And furthermore, the rising of theories such as ‘fear of China’ are the crackling noises of this break. 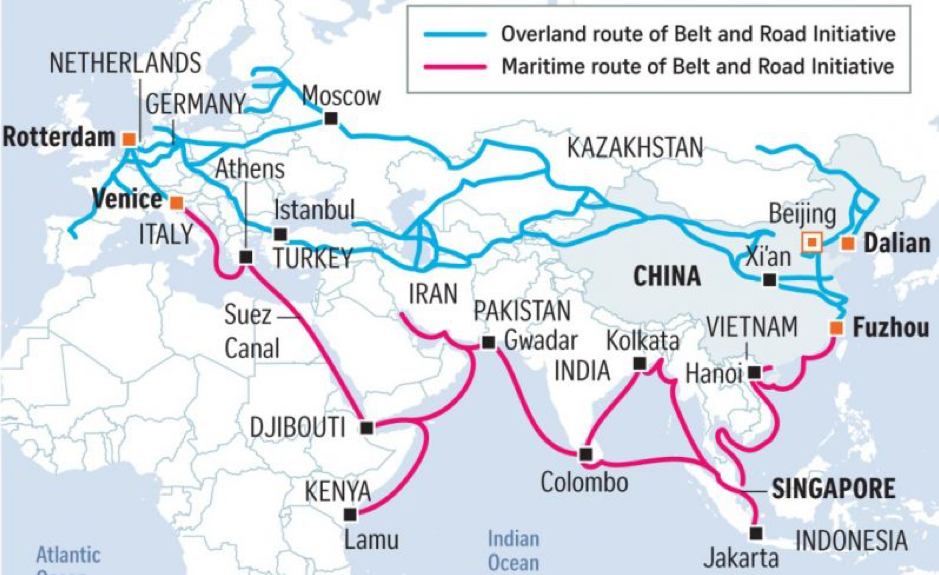 Today, China has brought itself closer to this geography by living the time simultaneously with its peers and their actions.

And with all of this, even though China will leave a big trail, this trail can have a devastating effect on China, based on claims that the promises made so far have not been met. Partnering countries may lose trust and destroy the relations of the future that have not been implemented yet.

China has found a space for action in Europe, and in the first place, they have destroyed the fear of alienation to the world. China had the opportunity to read the dynamics of the society in this new geography. This initiative, which can be considered as the first in modern time in terms of its diameter, will appear in different ways at the point where it loses its continuity. But in any case, the best thing to do is let China exist in neighbouring countries but make a strong negotiation.

This is the proceedings of author’s speech at the Annual European Neighbourhood Conference at Saint-Louis University, Brussels (4 February 2020)

[1] The ‘Jifu’ is a system of etiquette and law described in the literature of the Zhou Dynasty and the Qin and Han Dynasties. This system arranges the relationship between the center and the surrounding area based on geographical distance, and also stipulates the surrounding obligations to the center. The obedience system in the pre-Qin literature had a profound impact on the handling of internal and external relations between the dynasties of later China. A thousand miles is an area under the direct jurisdiction of Chinese Emperor. According to the close relationship with emperor, the service can be divided into multiple levels from near to far.