A Brief Look into The 2016 Global Terrorism Index Report 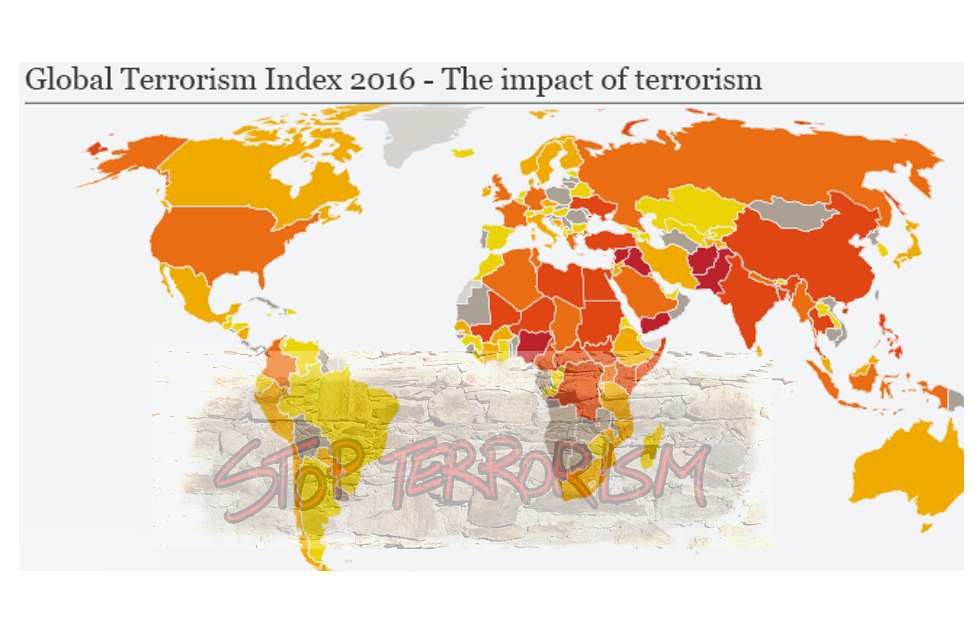 The aim of this paper is to give a general look into the “2016 Global Terrorism Index (GTI) Report” by The Institute for Economics and Peace (IEP).  The report is available online[1].

IEP, founded in 2007, is an independent, non-partisan, non-profit think tank dedicated to developing metrics to analyze and to quantify the economic value of the peace. In that sense, IEP focuses on developing new conceptual frameworks to define peacefulness; providing metrics for measuring peace; and uncovering the relationships among business, peace, and prosperity as well as promoting a better understanding of the cultural, economic and political factors that establish and sustain the peace. IEP works with a wide range of global partners and collaborates with intergovernmental organizations on measuring and communicating the economic value of the peace. Products of IEP is being referenced extensively by governments, academic institutions, think tanks, non-governmental organizations and by intergovernmental institutions such as the OECD, The Commonwealth Secretariat, the World Bank and the United Nations. Recently, IEP was ranked in the top 15 most impactful think tanks in the world on the Global Go to Think Tank Index.

GTI, one of the IEP’s annual productions, analyses the impact of terrorism on 163 countries, covering 99.7 percent of the world’s population. The GTI is based on the Global Terrorism Database (GTD), which consists of systematically and comprehensively coded data on 150,000 terrorist incidents, each of which presents an intentional act of violence or a threat of violence by a non-state actor.

The 2016 GTI report is composed of an executive summary, an introduction to GTI and six sections. The overall design of the report is well organized, and the results are clearly presented and interpreted.

Executive summary of the report alerts the readers that as the time passes, the nature of terrorism changes and the threat grows. The global terrorism index part draws a framework of the study through defining terrorism and informs the readers about the data on which the report is built. The GTI defines terrorism as “threatened or actual use of illegal force and violence by a non-state actor to attain a political, economic, religious, or social goal through fear, coercion, or intimidation”.  Considering the fact that neither the international community nor scholars have agreed on a universally acceptable definition of terrorism (Horgan, 2017; Greene, 2017), it is a significant contribution to provide a definition by an independent think tank, whose products are referenced by governments, academic institutions, and supranational organizations (i.e., OECD, The Commonwealth Secretariat, the World Bank and the United Nations).

The results section analyzes the changes in terrorism trend in 2015. According to the report; the annual number of deaths in terrorist attacks declined thanks to the military operations against Boko Haram and ISIL, which are considered as the two most dangerous among 274 known terrorist groups that carried out an attack in 2015. However, both groups expanded their activities in other countries and threatened the other parts of the world. Boko Haram expanded its activities form Nigeria into Niger, Cameron, and Chad, and this increased the number of people being killed in terrorist attacks in these three countries. ISIL shifted its strategy to become a transnational actor, not just for the other parts of the Middle East, but also for Europe. In addition, the number of countries in which ISIL and its affiliates are active has increased from 15 to 28, while in Europe, ISIL’s transnational tactics in combination with lone wolf attacks inspired by the group have climbed up to its highest levels ever in 2015.

The trends section explores the overall trends in terrorism between the years of 2000 and 2015. The report highlights a steady proliferation of terrorism all over the world, which have plateaued in 2015, and a dramatic increase (550 %) in the number of deaths of private citizens as compared to 2000.  Focusing on The Organization for Economic Cooperation and Development (OECD) countries, results showed similar trends: Terrorism reached its peak point after 9/11 attacks, 21 of the 34 OECD countries suffered from terrorism, the number of attacks increased to 731 in 2015, and the number of deaths increased 650 % as compared to previous year. It is important to underline that ten worst ever attacks resulted in 579 deaths in OECD countries from 2015 to July 2016, and half of these attacks were carried out by lone actors or relatively small groups. In addition, the report stated that the profile of international terrorist group recruits, such as ISIL, was dominated by highly educated, unemployed and isolated individuals while the profile of domestic terrorist group recruits, such as PKK, was dominated by highly educated individuals who have low-level income and socio-economic status.

The terrorist groups section focuses on four major terrorist groups: ISIL, Boko Haram, Taliban, and al-Qa’ida, which were responsible for 74 percent of all deaths due to terrorism in 2015.  The analysis presented in this section showed the political and social climate in which these terrorist groups formed, how they reacted to the interventions and changed their norms, and how leadership affected their goals.

Considering the trends and the terrorist groups sections, findings confirmed the prior research on individual and group behavior (Bales, 1965: Tuckman, 1965; Tuckman & Jensen, 1977; Toffler & Alvin, 1980; Miserandino, 1996; Rapoport, 2002; Forsyth & Burnette, 2010): Just like the other organizations in social life, terrorist organizations are affected by their environment; in the information age, terrorist organizations have shown a tendency to turn into distributed/decentralized social configurations and terrorism has evolved into a religiously motivated action; the social context that does not support the basic needs (belonging, competence, and autonomy) has resulted in disengagement of individuals from the society, and facilitated the recruitment of individuals by the terrorist organizations (Toffler & Alvin, 1980; Miserandino, 1996; Rapoport, 2002); and as a result, religiously motivated and/or virtual (fully distributed) or hybrid (partially distributed) terrorist groups have formed and spread in some parts of the world through a combination of personal, situational and interpersonal processes (Forsyth & Burnette, 2010, p. 500), after formation, they have passed some cyclic stages from formation to performance (Tuckman, 1965; Tuckman & Jensen, 1977), and cycled some of these stages as they faced with interventions or challenges (Bales, 1965).

The report highlighted that the total economic impact of violence reached $13.6 trillion in 2015 or in other terms 13.3 percent of the global GDP. This impact was relatively small when compared to the economic burden of other forms of violence, accounting for approximately one percent of the total cost of violence at the global level in 2015. However, the current increasing trend in the number of terrorist attacks worldwide and the tendency in bombing/explosion style attacks indicate a potentially worse impact on world economies in the near future. The impact may get even worse depending on the characteristics of a specific economy subject to terrorism and the duration of a terrorist campaign adversely affecting the economic growth, capital movement, and trade flows.

The correlates and drivers of terrorism section contribute to the understanding of terrorism through statistical analysis.  According to the report, drivers of terrorism vary between OECD and non-OECD countries. While acceptance of the rights of others, good relations with neighbors, the likelihood of violent demonstrations and political terror were determined as drivers of terrorism for all countries;opportunities for youth, free flow of information, criminality, and access to weapons were the drivers peculiar to OECD countries. On the other hand, the continuation of ongoing conflict, corruption, and political instability were the drivers peculiar to non-OECD countries.  In particular, results show that, between 1989 and 2014, 93 percent of all terrorist attacks occurred in countries with extensive political terror, and 91 percent of all terrorist attacks occurred in countries with internal and internationalised conflict, indicating that the levels of political terror – defined as the levels of state-sanctioned killings, torture, disappearances and political imprisonment – and ongoing conflict are the most significant correlates of terrorism.

Analysis of the statistical properties of terrorist organizations contributes to the understanding of their dynamics. Results show that majority of deaths from terrorism occur from a relatively small percentage of attacks. Specifically, 80 percent of all deaths were caused by only 20 percent of all attacks since 2000. This finding confirms prior studies (Clauset & Gleditsch, 2012), which state that the deaths from terrorism follow a power-law probability distribution, which is common in many phenomena, such as the intensity of natural disasters and the use of violence in armed conflict. In addition, results show that power-law nature of terrorism is independent of many factors (geography, ideology, time, etc.). In a general sense, the Taliban, al-Shabab, and FARC have an almost identical distribution of deaths however, Boko Haram and ISIL are more similar to the Tamil Tiger campaign in Sri Lanka in the 2000s. Moreover, attacks by lone actors show the same statistical pattern. Researchers state that, practically, power-law distribution, which indicates the likely lethality of future terrorist attacks based on history and past trends, suggests that possible trajectories of emergent terrorist organisations and changes in the power-law distribution can signal changes in success or failure of counter-terrorism operations.

The expert contributions section features research from leading academics and practitioners on approaches to understanding and countering terrorism. For instance, The Victoria Police Counter Terrorism Command’s Specialist Intelligence Team describes their experience with regards to the community-driven prevention and suggests that an integrated approach to countering violent extremism is necessary for the current security environment. Researchers (Cunningham and Koser) from Global Community Engagement and Resilience Fund discusses and underlines the engagement of private sector in preventing violent extremism. Maggiolini and Varvelli explore radicalization in the view of hotbed, which refers to an environment that favors rapid growth or development(“Hotbed”, 2018). After analyzing several cases of radicalization, researchers conclude that anything but a trivial fact is that each hotbed has its own distinctiveness as well as its relative pathways to radicalization. Study of Schori Liang from Geneva Centre for Security Policy focuses on the financial resources of terrorism and points out the role of connection between criminal and terrorist networks in the proliferation of global terrorism. Research shows that although several factors such as war, religious and ethnic conflict, corrupt governments, weak militaries, failing/failed states, and the growth of information technology affect the increase of global terrorism, the collaboration of criminal and terrorist networks has vital importance in countering it. Researchers suggest that the connection between the criminal networks and terrorism results in new hybrid groups, which are driven by both revenue generation and political motives. In that sense, the international community, as well as the regional states and actors, must work together closely to control the financing of terrorism.

Sebastian von Einsiedel,  from United Nations University Centre for Policy Research, analyzes the UN’s counter-terrorism actions over the course of last half-century and concludes that while the UN plays an important and useful role in establishing norms and frameworks for cooperation, its most significant operational contribution may ultimately lie in a field that does not fall narrowly within the UN’s counterterrorism framework; namely, its work in resolving conflicts in countries where terrorist groups seek to take advantage of the widespread instability.

Overall, this well-developed and well-organized report is more than an attempt to systematically rank world nations according to the terrorist activity within. It defines and depicts different aspects of terrorism from its roots to its regional and global impact, and presents organizational and individual level comprehensive analysis. For me, findings of this report may open avenues for not only policymakers but also academicians who currently deal with terrorism issues.

Miserandino, M. (1996). Children who do well in school: Individual differences in perceived competence and autonomy in above-average children. Journal of educational psychology, 88(2), 203.

Hotbed. (2018). In Merriam-Webster. Retrieved from Merriam-webster.com.