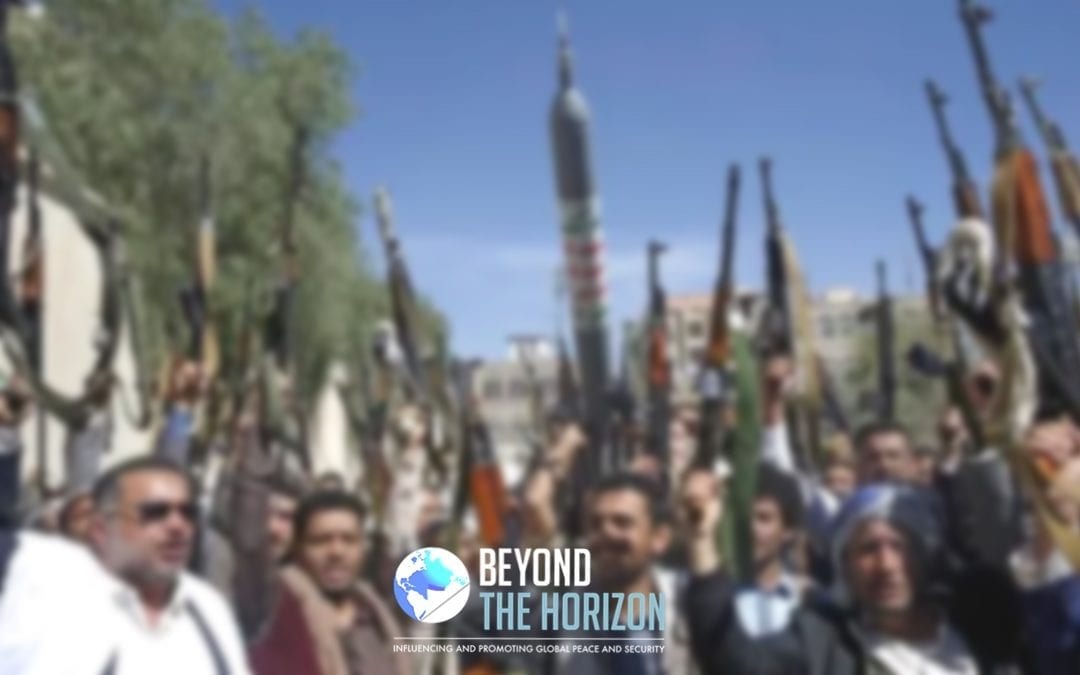 On November 16, Foreign Policy magazine reported that the Trump administration is planning to designate the Iran-backed Houthi militia as a terrorist organization.

Writers and commentators covering Yemen rushed to warn against the move, saying it would cause chaos, risk killing the political process, and devastate the humanitarian and commercial sectors in Yemen.

These warnings and concerns show the general lack of knowledge about the Houthis. From their anti-Semitic chants to their sectarian protests, the Houthis remain one of the most understudied rebel groups in the world – and one which the US is right to designate as a terrorist group.

To understand how the Houthis operate, it is necessary to look at several key areas: the militia’s cartel structure, its anti-Semitic and sectarian ideology, including its growing use of propaganda including in schools, and the powerful position held by the Houthi leader, Abdulmalik al-Houthi.

The Houthis – a network of small militias with a strict hierarchy – today rule Yemen’s capital Sanaa and several of the country’s northern provinces.

To govern the territory they control, the Houthis run a network parallel to the official state structure that encompasses all sectors of government. The system has many parallels with a gang cartel running a city.

At the top is the “kingpin” Abdulmalik Al-Houthi, surrounded by his trustees. Based on reports from his trustees, the kingpin sets the agenda on a day-to-day basis and is the ultimate authority.

Under this close circle are the general supervisors, who do not interact with the public and are usually anonymous. Like the “lieutenants” of a gang cartel, they often have aliases.

On the ground, a network of supervisors who interact with the public and control turf report to these general supervisors. Each supervisor has his own turf that he protects from others, and armed groups run by different supervisors might even clash with each other.

These supervisors are a collection of religious fanatics, former criminals, and opportunists. In exchange for authority over their turf, the Houthi leadership expects them to fulfil three main tasks. First, to pass a percentage of any revenue collected up the chain. Second, to recruit for the organization. Third, to run an active indoctrination campaign.

On a daily basis, these Houthi supervisors harass women over their clothing, shut down restaurants and cafes that do not segregate between genders, and enforce a ban on music in weddings and ceremonies – even universities are not allowed to have graduation parties. They survive through extorting money out of stores and businesses and running oil black markets. Their money-making schemes have attracted criminals and opportunists, who joined the group to profit from the system. People who do not adhere to their moral code can be arbitrarily detained, forcefully disappeared, or tortured to death, without any interference from the judiciary.

Also on the ground is the Houthis’ network of “watchers” – informants who serve as the eyes and ears of the organization. These informants provide information to Houthi officials at various levels, including in some cases directly to al-Houthi’s inner circle.

They also play a censorship role, reporting on individuals and entities who criticize the organization or its leader, including posts on social media, articles and any kind of activity. As a result, journalists are imprisoned, newspapers confiscated, and TV stations closed. People living under the Houthis therefore live in an environment of fear.

The Houthi network is extremely violent and oppressive.

In 2015, Reporters Without Borders ranked the group as second only to ISIS in violations against journalists. Human Rights Watch has documented the Houthis policy of hostage-taking, their killing of immigrants, and their constant use of landmines and blocking of aid including during the COVID-19 pandemic. When the conflict erupted in Yemen, the Houthis used dissidents as human shields, holding them in weapon depots being bombed by Arab Coalition forces.

The Houthis have not just established violent, cartel-like control over parts of Yemen, but also promote their sectarian and intolerant ideology.

Anyone who criticizes the system is quickly denounced as a traitor, mercenary, or American or Israeli spy. This is in line with the Houthis’ ideology, which doesn’t see them as fighting a tribal war in Yemen but instead waging a struggle against the imperialist states of Israel and the US. Under this worldview, the Houthis’ domestic opponents are portrayed as stooges. Likewise, the Houthis portray Saudi Arabia as an agent of the US and Israel.

The Houthis have disseminated this ideology in the territory they control, including through schools, making significant changes to the education curriculum. They run summer camps to teach their doctrine and run courses that are mandatory to all public employees and school children. In schools, universities, and other institutions, people must pledge allegiance to Abdulmalik Al-Houthi instead of pledging allegiance to the constitution and the Republic of Yemen. Last month a video went viral on social media depicting members of the police academy pledging allegiance to Abdulmalik Al-Houthi and chanting the infamous Houthis chant “Allah is great, death to America, death to Israel, damn the Jews, victory for Islam,” all while performing a Nazi salute.

The Houthis promote a sectarian and hostile ideology. The organization started persecuting Jews, Baha’is and other minorities the moment they came to power. They soon drove millions of Yemenis out of their homes. The Houthis also started a policy of demolishing their opponents’ properties. Their TV channel Al-Masirah epitomizes this hostile propaganda and is not dissimilar from al-Qaeda’s public messaging.

The supervisors recruit children from their schools to serve on the frontlines and prey on the vulnerability and poverty of their families. They use money extorted from the public to keep their recruitment efforts alive. And because there is only a limited amount of money they can extort and tax, this year they started confiscating private businesses and banks.

Humanitarian agencies have also suffered from extortion and the diversion of aid. International non-governmental organizations working in Yemen today cannot run a workshop or carry out a trip to the field without obtaining security clearance from the top Houthi intelligence services. The World Food Programme in December 2019 and April 2020 publicly highlighted the theft and diversion of aid after they exhausted all channels of communication with the Houthis leadership. In early 2020, the Associated Press issued a damning report detailing the corruption, theft and blackmail exercised against UN agencies. The UN has no option but to comply with the Houthis, or risk their programs being shut down.

The impact of designating the Houthis as a terrorist organization – which critics say will be apparently devastating – already exists today, and the international community has a responsibility to act now.

The people who state that the Houthis are not a terrorist organization, and that designating them as such risks further radicalization, clearly have no idea what this organization is doing on the ground. The Houthis are already radicalized, they are violent, and they do not hide it anymore. They are a cartel that tries to push a product down the chain – in this case, their hostile ideology – to feed the greed and desire for power of their kingpin, Abdulmalik al-Houthi. This Houthi kingpin is a religious fanatic – one who has produced a dangerous ideology that must be countered.

This commentary was first published at
Al Arabiya English on December 4, 2020.