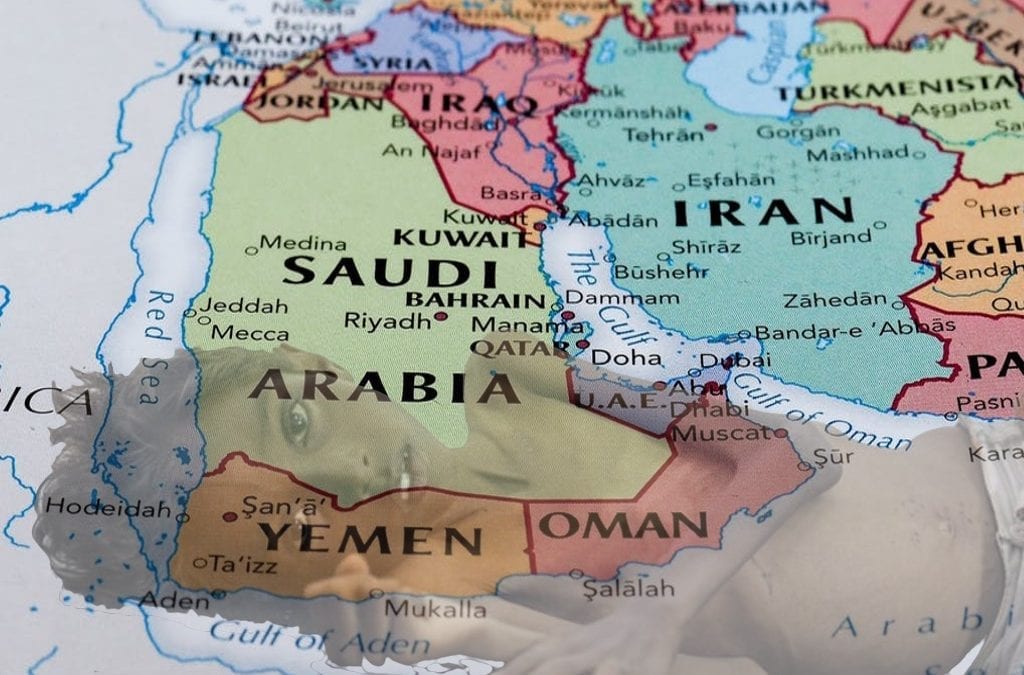 The events following the murder of Khashoggi shook the US, the EU and the rest of the world. Although not directly related with war in Yemen, the scandal worked as a catalyst for a series of events culminating with the latest statements by US Secretary of Defence Jim Mattis on Tuesday, calling sides to halt hostilities within 30 days. Secretary of State Mike Pompeo’s statement followed, which read: “The time is now for the cessation of hostilities, including missile and UAV strikes from Houthi-controlled areas into the Kingdom of Saudi Arabia and the United Arab Emirates. Subsequently, Coalition air strikes must cease in all populated areas in Yemen.”

So what? Will we see the hostilities end just like prescribed by both US officials? It is not easy to give a direct answer to this question. Only time will show that. But so far several things have become clear that should be further noted.

First, the evolution of the events verify our previous analysis with H.Arslan in our article,  “Yemen on Fire” where we defined the conflict in Yemen as a multi-shaded proxy war. So, a Coalition motivated by multiple motivations to include the fear of Iranian influence to expand at its doorsteps and projecting power has intervened militarily with the declared aim of restoring order (!) in Yemen. But this last US intervention showed that the Coalition itself is a proxy moving in the playfield marked  by the US.

Second, it shows where US administration stands from moral standpoint. Despite numerous reports on the war crimes committed by the Coalition to include civilian deaths caused by reckless targeting in airstrikes, Trump Administration has opted for whitewashing the Coalition efforts to further legitimize Its own support to Coalition Ops until now. Even in the latest event, Trump said he found Saudi explanation about the disappearance of Khashoggi “credible.” However, such moves have not succeeded in keeping the issue  in the fringes. The event attracted attention of the US public to the war in Yemen. 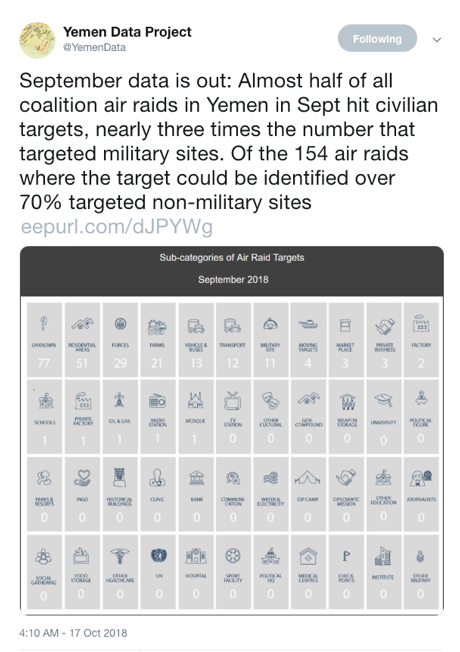 In this regard, in the Congress, a bipartisan bill was prepared to reciprocate growing public concern to disentangle US from the war in Yemen.  Similarly, a bipartisan group of 21 House lawmakers introduced a bill to immediately stop all military sales and aid to Saudi Arabia’s government.

In tandem with abovementioned initiatives, the New York Times editorial board published an Op-Ed as early as August 28, 2018 listing the havoc created by the Coalition airstrikes. The Op-Ed ended with the following paragraph:  “President Trump, alas, is not likely to lean on Saudi Arabia, but military officers have begun to speak out and Congress has begun to act. A defense policy bill includes a bipartisan provision to require certification by Secretary of State Mike Pompeo that the coalition is taking steps to prevent civilian deaths. The next move should be to cut off military aid to Saudi Arabia until it is prepared to talk about ending the assault on Yemen.”

Then came the photo campaign laying bare the humanitarian situation in Yemen before their readers’ eyes. The pictures of emaciated children were so vivid that Trump had to back from his original stance. Because a picture is worth a thousand words. Trump saw that his words would not alleviate public fury on the US engagement in Yemen.

Still, there is a moral question to be answered. Had it not been for the murder of Khashoggi or better had it not been for the detrimental effect of the events on Trump’s political image, would US not make a call to sides to halt hostilities? Or why did US wait until 10.000 Yemenis died and three quarters of its total population became dependent on humanitarian aid to make this call? The answer may be the prospective arms sales between US and Saudi Arabia totaling to $110 billion.

The window opportunity given to the Coalition by US is, as declared by Mattis, 30 days. In this regard, reports already started to come indicating the Coalition has massed forces in front of Hudaydah to finish off the initiative before the deadline.  Vice Pressident and Lt.Gen.Ali Mohsen Saleh was at the front in Ma’rib two days ago for inspections to hold the morale of the Army high. Houthis will take their precautions too. The insurgent group will try Its best to guard operational gains as long as their forces are up to that. We will probably see both sides doing their best to maximize their territorial gains before sitting around negotiation table. 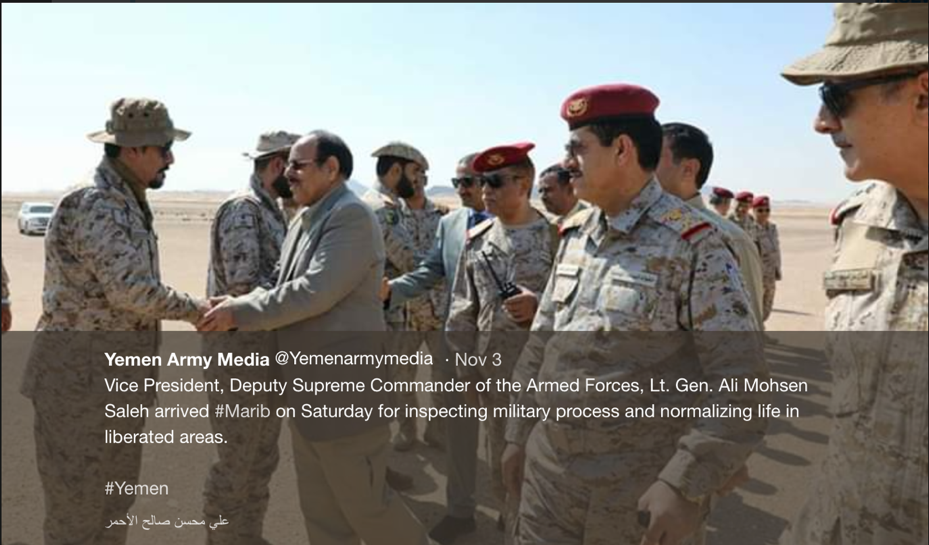 It should be noted that a cease-fire is not a direct ticket to peace for Yemen. The internal dissension and differences between Houthis and Southerners have turned into animosity during the war and they are not easy to mend. What is more, even if we assume that such differences did not exist at all, the South Transitional Council (STC), the structure funded and partly directed by UAE behind doors will not give respite to President Hadi with their demands for secession. Hadi’s rule in Yemen is at best virtual and STC is already ruling Aden and most military units and formations. It is highly likely that the moment we see a stability of any kind between Houthis and the internationally recognized government will be the same moment for the commencement of new conflicts between those for and against secession in South.

An important factor that has been very often repeated in the Weekly Yemen Crisis Watch in Beyond the Horizon is what will happen to the perpetrators of war crimes. Yemen has witnessed many injustices and the dirt of war, as Minister of Foreign Affairs of UAE, Anwar Gargash puts it. The reckless targeting of civilian targets has maimed infrastructure in the country and questionable methods implemented has put the country in disarray. Those questionable methods can be listed as assassination of leading political figures mainly from Islah Party and religious leaders of importance, secret deals cut out with AQAP to be used in war and the use of child soldiers. Will we see an International Criminal Tribunal for Yemen as we did for its precursors like the former republic of Yugoslavia or Rwanda?

This seems like a distant probability.  This is due to the strong trade links between the West and the two prominent Coalition members, Saudi Arabia and UAE. What is more, the US, France and the UK have already been implicated in the war to different degrees. Such a development could spill over officials in those countries too.  Yet,  this latest call from US was not expected either. If the issue of war crimes moves to the mainstream from fringes, those having role in the destruction of the country and so many lives can be brought before justice.

To conclude, a cease-fire is a step in the right direction if happens. However, there is necessity for reconciliation within Yemen. The sides should be convinced to act within the rules of the political game. If especially the Houthis and STC can be forced to behave as they should, the country can be put on the straight path leading to reconciliation and reconstruction.

*Onur Sultan is a Ph.D. candidate and visiting fellow at Beyond the Horizon International Security Studies Group. He received his M.A. from the U.S. Naval Postgraduate School, National Security Affairs Middle East Programme and took role in the execution of Defence Capacity Building Package for Iraq in NATO.