What is Tech Diplomacy? A Very Short Definition 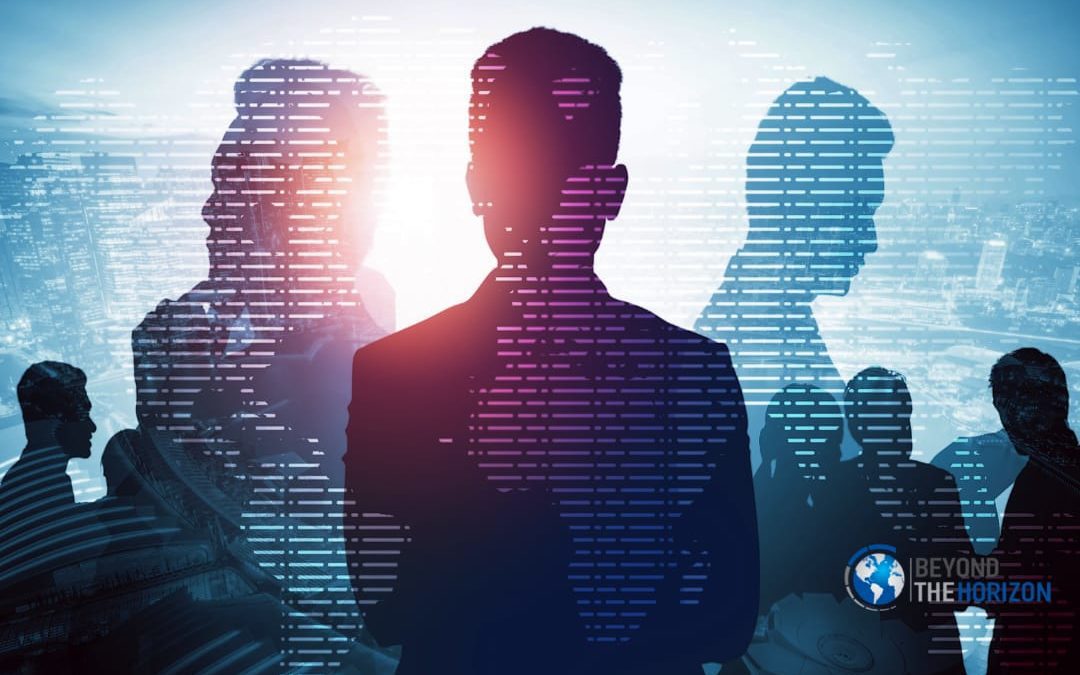 Too many concepts, too much confusion

Anyone trying to make sense of technology and international relations today will stumble into a plethora of closely related terms, such as e-diplomacy, cyber diplomacy, digital technology, tech diplomacy, and so forth. All these options on the menu seem very confusing (and they are), even for experts. They have been used interchangeably to apply to similar domains, but a bit more clarity would be welcomed. I will put forward here a few suggestions as a personal contribution to this ongoing debate.

What is diplomacy anyway?

Our first order of business should be to briefly clarify what we understand by diplomacy. What is diplomacy in the first place? There are plenty of definitions to choose from. For the purposes of this article, it suffices to say that we should not restrict ourselves to a traditional, Westphalian view of diplomacy as something applicable only to interstate relations.

In his book Diplomatic Theory of International Relations, Paul Sharp argued that diplomacy exists wherever people live in “conditions of separateness from one another”. Consequently, much before the coming of age of the nation-state, intergroup relations involved polities, societies, or communities in a plurality of settings. I had the opportunity to write about the prehistoric origins of diplomacy, tracing it back to its founding moment in the pre-state era by examining a first encounter between two distinct bands of nomadic Homo sapiens hunter-gatherers in the Paleolithic period. From a long-term historical perspective, therefore, diplomacy goes beyond the art and science of promoting peaceful relations among states.

Also, the character of diplomacy should not be confused with its nature. Firstly, its character is related to the way diplomacy is made, the skills, expertise, and resources normally deployed by diplomatic agents and other actors. Secondly, the nature of diplomacy is the very essence of the diplomatic activity, which has an enduring meaning in international relations. As technology advances, the character of diplomacy changes and this is to be expected. Yet, the deeply ingrained nature of diplomacy remains associated with human-to-human relations and how to organize peaceful interactions between groups, societies, or states. Human nature has not changed dramatically since antiquity after all.

A common approach usually refers to the growing use of social media and other online platforms by Ministries of Foreign Affairs as one of the drivers behind the engagement of diplomats with new technological tools to achieve their foreign policy objectives. Undoubtedly, information and communication technologies (ICTs) are now widely available, and their regular use has become an indispensable resource in the tech diplomat’s toolbox.

We know that e-government in general pertains to the process of digitalization in the public sector by means of utilizing web-based Internet applications and other information technology to improve services and efficiency. By analogy, e-diplomacy would mostly make use of multiple ICT tools to improve its own effectiveness and respond to the needs of the diplomatic service and their governments. I propose we should prefer e-diplomacy whenever the focus of our attention is on deploying such electronic and computer-generated tools, including actions on Twitter, Facebook, Instagram, TikTok, Linkedin, and other digital platforms.

Even though paper communications still survive, such as the centuries-old written Note Verbale sent by postal mail or courier, the pandemic accelerated the adoption of digitized alternatives. Future hybrid diplomacy will combine traditional offline practices and new, virtual forms of interaction among stakeholders. In a post-COVID world, online diplomatic meetings for routine work or very specific tasks will possibly be the first choice to avoid unnecessary, time-consuming long-distance travel. Face-to-face meetings would regularly be reserved for hard negotiations or key political decisions to be made. It is a matter of having the best of both worlds, the virtual and the physical world: going online whenever possible and traveling only when really needed to optimize time management and resources.

Cyber diplomacy has frequently been linked to cybersecurity and cyberwarfare, and the reasons for this are understandable. Cyber experts have a well-established tradition in the field. They have been around for quite some time. The stability of cyberspace has been on the United Nations agenda, for instance, at least since 1998, when a draft resolution was first submitted to the UN General Assembly to deal with developments in the field of information and telecommunications in the context of international security.

Developing cyber norms, capacity-building, and confidence-building measures are often key elements in cyber diplomacy strategies, along with defense of critical infrastructure against existing and emerging cyber threats. The world is increasingly hyperconnected through the ICT environment and this interdependence brings more risk of incidents involving malicious activities in cyberspace by state and non-state actors. Both practitioners and academic researchers have been contributing to raising awareness concerning cyber diplomacy, a term that will probably retain its attractiveness for the time being.

The prevailing trend, however, seems to be toward incorporating the cyber domain into a larger policy spectrum within national governments to address digital challenges more broadly. The recent establishment of a Bureau of Cyberspace and Digital Policy by the US Department of State is an attempt to further coordinate concerns about responsible state behavior in cyberspace with the overall debate on the integrity and security of the Internet. Other countries are also trying to adapt their bureaucratic structures to cope with new developments at the international level as far as digital technologies are concerned. Breaking silos, we may soon see cyber issues fully integrated into more comprehensive digital strategies by MFAs.

The use of digital diplomacy as a concept has gone mainstream today. It may include not only social media and cyber issues, but also all the topics in the intersection between diplomacy and the Internet, such as virtual environments in which diplomacy is conducted (e.g. web platforms, videoconferences, Zoom diplomacy) or substantive matters related to human rights online, privacy, disinformation, content moderation, cross-border data flows, etc.

The list of examples may continue endlessly: deliberations at the Internet Governance Forum (IGF), the work of the UN Ad Hoc Committee on a new Cybercrime Convention, e-commerce WTO negotiations, or the process toward a Global Digital Compact to be adopted in 2023 by the Summit of Future, as envisaged in the UN Secretary-General’s report Our Common Agenda. Last May, the Security Council convened a briefing on the use of digital technologies in maintaining international peace and security to discuss the role of ICTs in conflict.

Jovan Kurbalija and his colleagues at Diplo Foundation cover extensively digital diplomacy on their website. Corneliu Bjola also has several major contributions in a growing literature on the subject. Ilan Manor wrote the book The Digitalization of Public Diplomacy and has a blog discussing these topics. He suggested, by the way, that “digital diplomacy is the growing use of ICTs and social media platforms by a country in order to achieve its foreign policy goals and practice public diplomacy”. In my proposed terminology, digital diplomacy comprises both the tools (practical applications) deployed by diplomats and the topics themselves.

Incidentally, the pandemic brought about a paradox: we are now closer online, but further apart in the real world. More opportunities are available to engage people and connect virtually, but international politics is fraught with geopolitical tensions, polarization, ideological divide, mistrust, and fragmentation. There is a crisis of confidence in international institutions and to manage these divisive fault lines we need more diplomacy, not less. We need to ensure that digital tools are utilized not to divide and conquer, but to bring people together and make them overcome their differences in search for common solutions.

Tech diplomacy: putting it all together

The term technology diplomacy (or tech diplomacy, for short) gained traction after the appointment of the first Tech Ambassador by Denmark in 2017, based in Silicon Valley, with a global mandate and offices in both Copenhagen and Beijing. Their approach, called techplomacy, was designed to rethink diplomacy in its traditional sense and open a dialogue between states and the tech industry. It acknowledged the need to engage with new, powerful, and influential non-state actors in the international arena to discuss the future of technology and foreign policy in the digital era.

It is also true that tech diplomacy cannot be confined to the interaction between governments and Big Tech companies leading the Internet industry. States are indeed the most important political unity in international relations, but in a multistakeholder environment they share the stage with other players and relevant actors, including from the business community, civil society, academia, and the media. Besides, global technological issues transcend the cyber domain or the debate surrounding human rights, democratic values, and other legitimate concerns regarding digital services, Internet governance, and the overall impact of digitalization in contemporary society.

The scope of tech diplomacy encompasses digital diplomacy, but it has a broader range. Critical technologies, such as artificial intelligence, semiconductors, 5G networks, Internet of Things (IoT), quantum computing, robotics, blockchain, 3D printing, augmented and virtual reality, or synthetic biology, to name just a few, should be of interest of all tech diplomats. They are expected to be able (ideally) to interact with many different sectors, industries, and innovation ecosystems, while seeking win-win cooperation with partners in frontier technologies to help promote economic and social development back home.

Having said that, here is my proposed definition: “Technology Diplomacy is the conduct and practice of international relations, dialogue, and negotiations on global digital policy and emerging technological issues among states, the private sector, civil society, and other groups”.

A holistic approach is needed to see the big picture. This definition aims to be as comprehensive as possible. Tech diplomacy should not be equated with foreign policy digitalization, but all other concepts we mentioned above are subsumed under the term, as depicted below. 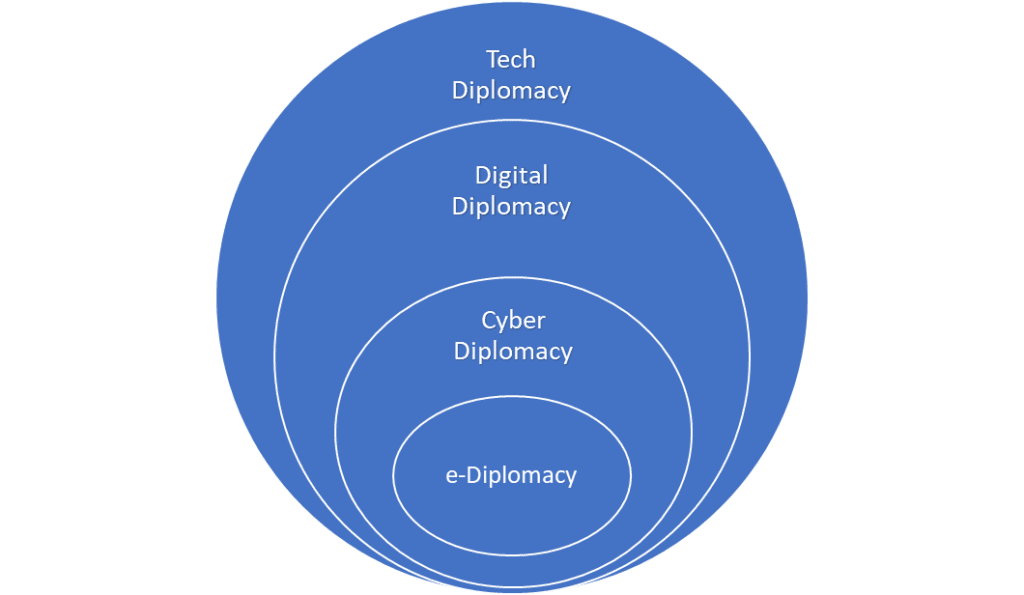 Technology Diplomacy is the conduct and practice of international relations, dialogue, and negotiations on global digital policy and emerging technological issues among states, the private sector, civil society, and other groups.

As a matter of fact, conceptual ambiguities will not go away easily at this transition stage, when competing terms are used indistinctly, without much reflection. Either as a tool or as a topic on the international agenda, new technologies will transform everything we do in the coming decades. Actual usage will have the last word.

Again, technological advancements may change how diplomacy is made (its character) over the centuries, but humans (their nature) remain mostly the same. Do not expect to see robots taking over the role of diplomats in the near future. Diplomacy is basically about people, person-to-person interactions, even if they are interacting virtually. Technology is constantly changing. The ultimate goals of diplomacy, nonetheless, are essentially very similar to ancient times: how to conduct international (intergroup or interpolity) relations by negotiation, cooperation, or any other peaceful means, in order to promote friendly exchanges among the actors involved in these interactions.

* PhD, Deputy Consul General in San Francisco and Tech Diplomat to Silicon Valley. The opinions expressed here are those of the author. Email: egarcia.virtual@gmail.com