What is happening in Idlib province? 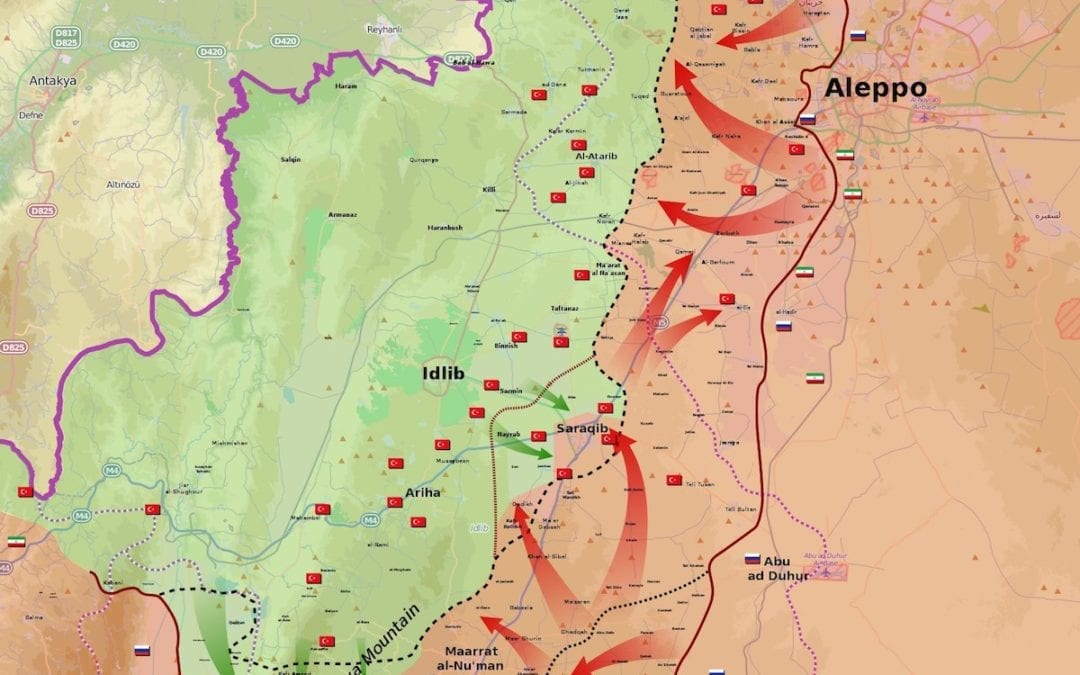 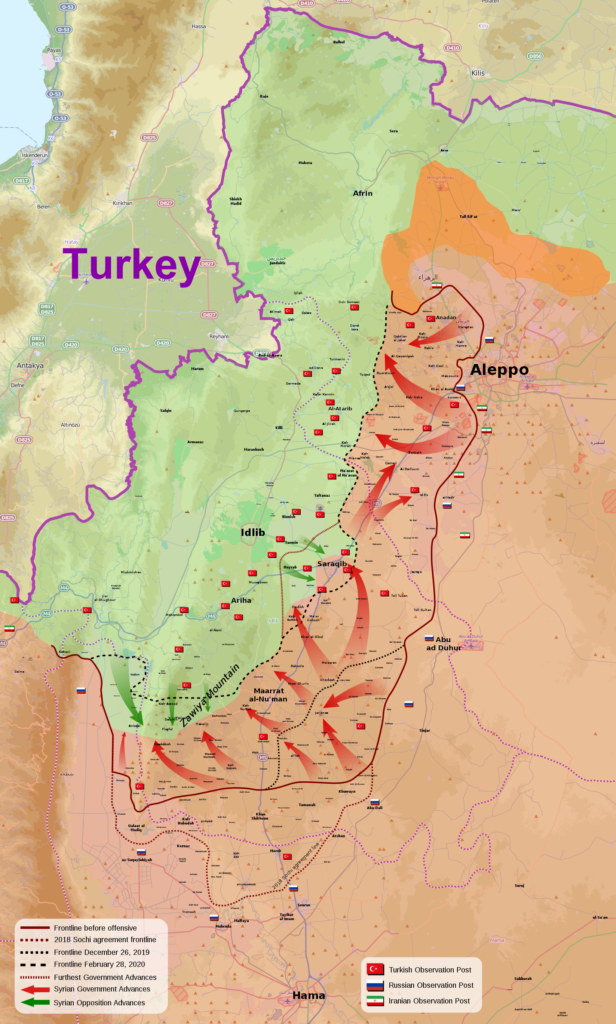 Several weeks ago, the Syrian regime decided to take one of the last holdouts of the rebels, in Idlib. The area is right at the border with Turkey, and after the Sochi agreement, Turkey has a military presence there in the form of several observation posts, ensuring that the Assad Regime does not cross and attack Idlib and its surrounding areas, where millions of refugees from all over Syria are huddled.

The Syrians forged ahead, and after a sluggish start, they called Hezbollah in. Then their attack picked up steam and they started taking over village after village. Hezbollah rarely advertise its foreign involvements, especially not in Syria, yet we can glean an approximative picture, by looking at two indicators:

When Hezbollah started making headways (the red arrows in the featured image of this article), the Turks objected and tried to convince the Russians to reign Asaad and Hezbollah in. The Russian did not intervene, on the contrary, they provided Assad with a significant air and artillery cover. Even though, in the past years, the Russians have been trying to get closer to Turkey, pulling them away from the US (the whole F-35 debacle, is a prime example of that), it seems that the Russian relations to Turkey have soured following Turkey’s recent involvement in Libya, and supporting the party opposite to that which the Russians are backing.

Therefore, with Russian air support, Assad / Hezbollah forces attacks continued unabated. Then the first of three incidents, that will change the situation occurred. First, a Turkish observation post was hit, and the Turkish army suffered casualties. The Turks responded with a bombing salvo, and Erdogan issued a threat demanding the return to the old lines on the map by the end of February, or else! His warning was not heeded, and Assad / Hezbollah forces forged ahead.

One incident might be a mistake, but three are definitely intentional. What are the reasons: Hubris? The Russian desire to pressure Erdogan in Syria so he retreats from Libya? Regardless, after the second incident, President Erdogan’s tone rose and after the third incident, on February 27th, when around 40 Turkish soldiers were killed, in an airstrike, with rumored Russian involvement, the Turkish anger was unleashed and President Erdogan ordered his forces to engage. 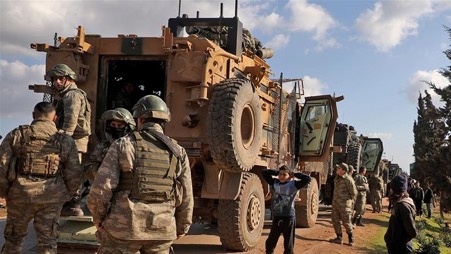 Under a heavy artillery barrage, and following a deadly campaign of drone attacks, that caused heavy casualties to the Syrian army and Hezbollah forces, Turkey’s Syrian allies were able to reverse the tide and village started to fall back into their hands (indicated by the green attack arrows on the main cover picture of this article).

Where are the Russians?

The Russians have strong control over most of Syria’s air space, with their S-300 and rumored s-400 deployed missiles systems. Although it seems that the Turkish warplanes are not directly flying over the areas of operations, limiting themselves to only drones, the Turkish counter-attack would not have been possible without a Russian green light or at least having them look the other way.

Why? Well in this already complex situation one must not forget that Hezbollah is a proxy of another force: Iran. And most probably, once the Russian saw that Erdogan was not going to stop, they took the opportunity to weaken their competitor in Syria. Indeed, both Russia and Iran are working together in Syria but they are also fiercely competing over the military, political, and economic control of Syria and its future. It is practically a zero-sum game, any advance by one of the players, result in a loss to the other. When the Turkish army started inflicting heavy casualties to Hezbollah, it reinforced Russian prominence in Syria. It showed that the only force that can protect the soldiers and equipment on the ground, and guarantee the success of any campaign, is Russia, not Hezbollah or Iran.

A little note before trying to decipher the possible short-term future events. This is the Middle East; precise forecasting of an event is not merely difficult but impossible. However, if one uses strategic realities, and try to elucidate major trends, it is possible to have a clearer vision of what may happen!

First: Despite appearances, the Libyan issue, and even if Russian involvement in the strike against the Turkish soldiers is confirmed, neither Turkey nor Russia have any interest, desire, or stomach for a direct confrontation. There is nothing to gain for anyone in a direct or even indirect confrontation between them. On the contrary, there is a lot to lose. Moreover, they both need each other, and they have been benefiting from their recent rapprochement. Each using the other as leverage to extract more concessions from the West and other regional players.

Moreover, the meeting between both Russian and Turkish President in Moscow this Thursday, reinforce this view. Both parties came out announcing their desire for a return to the status quo, to prevent any future casualties for both sides. There are even reports of a new agreement, for the future of the Syrian region, that has been made between the Turks and the Russians, probably calling for a return of the status quo.

Second: On the other hand, the Russians do not want to lose their Syrian ally, their hard-earned influence, access to military bases, and achieving their century-old strategic imperative of having a port in the Mediterranean. Showing who is boss, and weakening Iran and its proxies in Syria is one thing, but losing the Syrian regime is another issue completely. Thus, once the status quo has been restored (with a return to the old line of the observation posts), or when President Erdogan feels satisfied, the Russian will have a talk with the Turks and this campaign will come to a stop. Thursday summit between Russian President Putin and Turkish President Erdogan has been a step in that direction. 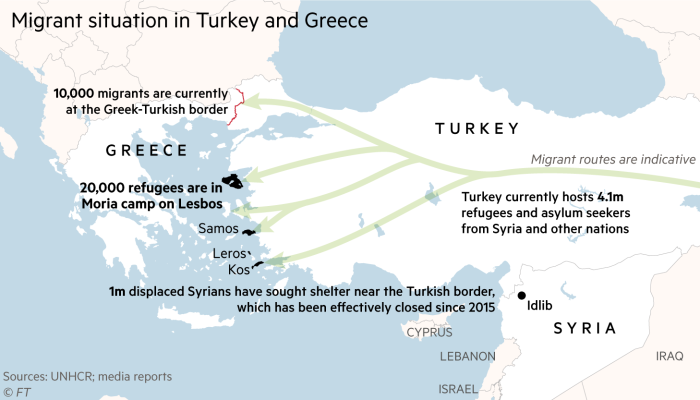 Third: The Refugees! Following the series of attacks against the Turkish army, President Erdogan chose to play the refugee card and opened up his border for anyone willing to immigrate to Europe. This created a massive exodus of refugees and heart-breaking scenes at the Greek-Turkish border.

As usual, the only real victims will be the civilians and the refugees that have been used and abused since the start of the Syrian civil war. The thousands trying to cross to Europe, the hundreds of thousands escaping operation zone. These poor souls will only know more hardship and pain. But similarly, once the European have caved and agreed to pay President Erdogan’s price, whether more aid or a shiny new missile defense system, the Turks will reclose the pipeline and the stream of refugees will stop.

Fourth: Strategically, nothing major has or would have shifted. Idlib will be enshrined as a Turkish safe zone. The Syrian civil war will keep on ending for a few more years, waiting for a proper political solution that would probably wait till the end of November to see who the next US president will be.

Fifth: For Lebanon, Hezbollah, has already lost a dozen or more fighters. In the grand scheme of things, such a loss is not really significant. Yet Hezbollah will need to work double-time to spin the defeat of the operation against Idlib in a better light. They are experienced spin masters, but with the degrading economic situation in Lebanon and the increased hardship felt by all Lebanese communities, including the Shia, this debacle will marginally increase, the pressure already felt, making a hopeless situation even worse.  However, what is much more worrying is that in North Lebanon, where Turkey has a strong presence and a lot of support among the Lebanese, there has been a lot of public support for Turkey’s campaign in Syria, and even gloating about Hezbollah recent losses, despite efforts by the traditional Sunni political powers. This is a very dangerous trend, that Hezbollah and its popular base might badly and violently react to!

Sixth, Israel, is not standing idle. However, It is not directly involved in this particular crisis, but the Israeli air force has been heavily involved in attacking any Iranian or Hezbollah target that, in one way or another, ‘threatens’ its security.  These attacks are usually done with an unofficial Russians green light, reinforcing the idea of Russian Iranian competition in Syria, that was previously expanded in this article.

Seventh, the US, is following closely, but not directly involved. It is important to note that the US has a direct interest in these events, especially when it comes to weakening Iran or its proxies, and as an added value making Russian-Syrian adventure more complicated. Indeed, State Secretary Pompeo “voiced unwavering support for Turkey”, calling for a return to the status quo of the Sochi Agreement.

Finally, these events have only reinforced the fact that the Syrian crisis cannot linger on, in this twilight. A definitive political solution must be reached, the never-ending humanitarian crisis must end, and the solution must be put in place. Especially when everyone knows that these solutions will take years to materialize and improve the livelihood of millions of Syrian refugees!