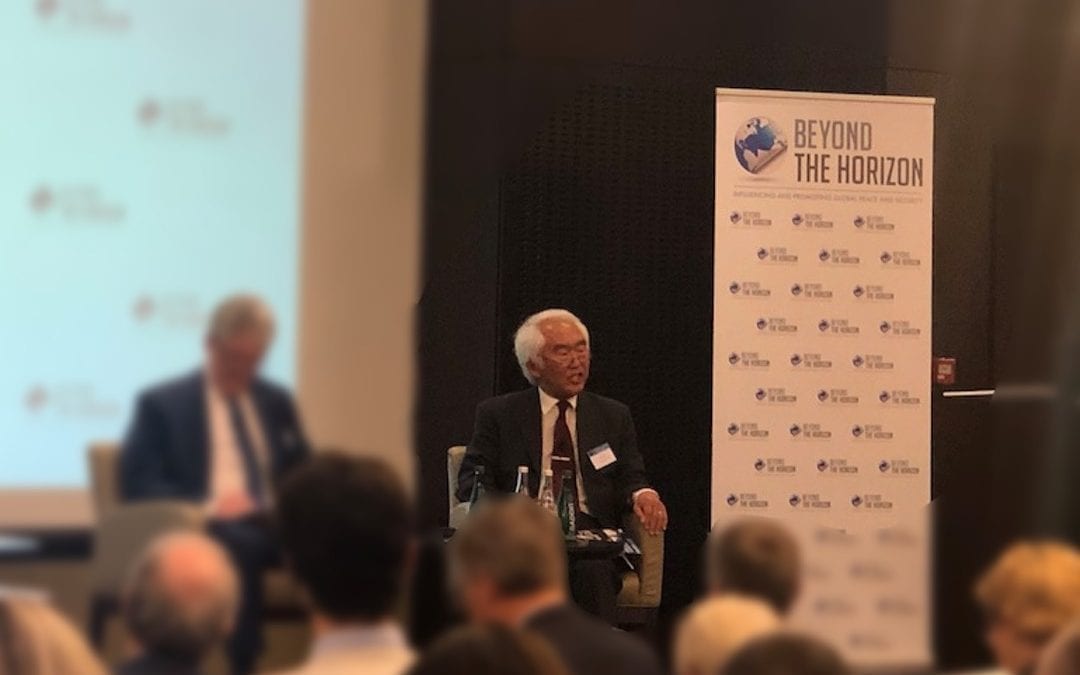 Let me start by noting that after 25 years as a U.S. Diplomat and 12 years teaching at Cranfield University, mostly at the UK Defence Academy, I know you are only going to take away one thing that I say in the course of this entire presentation. I always start out every course with it and it’s what I call “the secret of life.”  And in my view the secret of life is an old joke by the American comedian Henny Youngman, which is:

The only three words that matter in any serious discussion are, in my view,  compared to what.  With regard to the Third Offset Strategy, let me go ahead and cut to the chase and give you the bottom line on this topic: I think that the Third Offset Strategy exacerbates some of the most serious problems that we have within the transatlantic Alliance. But I promise to conclude with a good news story.

Let me start by noting what the Third Offset Strategy actually is. It was outlined by former Secretary of Defense Ash Carter. It basically highlighted that the U.S. response with regard to its near-peer adversaries was a focus on the technological edge. We are all familiar with time, cost and performance. There is no such thing with the Third Offset Strategy. It is all about performance. It is all about making sure that the U.S. maintains the technological edge.

What does that mean for the Alliance and for Europe in particular? There are three areas that I want to go over: military, industrial and political. With regard to the military, everybody has talked about the difference between U.S. spending on R&D and spending in the EDF. There is no reason to go over how significant that gap is with regard to funding and  technological developments. But the key aspect of this that I would emphasize is the pace with which that technological change has occurred. It is phenomenally fast and that has serious implications in one particular area, which I would say is new.

In the past, when you talked about interoperability between the U.S. and European Allies, it really was more generic. You did not have to have F-35s. You could have F-16s or F-18 Super Hornets.

Now with regard to areas involving C4ISR, being interoperable with the U.S. means having U.S. equipment. And that makes it a fundamental challenge for European countries. If the Allies actually want to work alongside U.S. forces, you are going to have to come up with the funding for rapid improvements of new technology that is being developed. You are going to have to be able to keep up with all the upgrades that the Pentagon is pursuing. The question is whether or not Europeans have the financial wherewithal and, more important, the political will to do that.

In light of what Europe has to do, the issue regarding military capabilities and the Third Offset Strategy is clear:  On the one hand, what you have got to pay to be able to operate alongside the U.S. and, on the other hand, the issue which has already been raised of national sovereignty. If Europe is all in with regard to keeping up with the Pentagon, I would venture to say you are going to have difficulty if you plan on pursuing national military objectives based on national interests. In the UK, the example that you would look at is Sierra Leone in 1999-2000. You can take a look at Mali now led by the French. To what extent does Europe need to maintain, first of all, the tie to the U.S. but also the ability to generate an independent military capability for actions where Washington is not going to want to participate. I think it is a fair statement that the U.S. is not going to pursue a Sierra Leone type of action. They certainly have no interest in significantly participating in Mali. The challenge for the Europeans is how to do both and if you have the wherewithal to do both.

The second issue is purely industrial.  Most of the topics have been raised. But what I would want to say with regard to tech transfer, jobs, funding, and other issues, quite simply is: what exactly is it that European industry wants? And this is in general, not just with EDF, not just the Third Offset Strategy. Is all you care about simply getting engineering work? If that is the case, I would say you are missing out on what the future involves with regard to high-tech.

Are you going to actually be able to get hold of the really stimualting outcomes, which are going to come out of the Third Offset Strategy? ITAR (International Traffic in Arms Regulations) has already been mentioned, and all of you know what it is. I am sorry about what a pain it can be. It is kind of you really not to make it sound like the horrific piece of legislation that it is. But the question is fundamental: even if ITAR did not exist, to what extent is European industry willing to share the trade secrets, the really good material with other competitors. Assuming there is a reluctance to do that, why would you anticipate U.S. industry being any different with regard to sharing the crown jewels?

The last point clearly is the political one. All of these things rest on the ability to come up with a political solution, making sure that things proceed in a positive manner. And in the absence of that solution, we really do have a situation where the problems in the transatlantic relationship are just going to be exacerbated.

Let’s start with the overarching issue. Something which not just the U.S. and European Allies raise but I would say everybody who is involved with modern military technology. What are the rules going to be with regard to making sure that humans remain in the loop with regard to decision making?  You have got to have somebody taking the lead, making the decisions, with regard to how you are going to ensure that autonomous vehicles do not proceed in a way which is detrimental to everybody.

But similarly, going back to those points that I have made before, Washington has to make a serious decision. If the U.S. believes that it is technology that matters over everything else, that is fine. But you are going to sacrifice the ability of Allies to work alongside you. That is a policy decision.

Is it really the intention of the U.S. to want to always have to go it alone, not because of political will, but because Allies do not have the ability to operate alongside you?

It also is going to be important on the European side to make, in my view, two critical decisions. First, in the U.S., since the “last supper” in the early 1990s undertaken by former Secretary of Defense William Perry, there was consolidation with regard to U.S. defense industry.  Europe has done some of that, but not a sufficient amount. I would put forward the proposition that when national governments really accept the idea that they have to consolidate and get rid of inefficient industries, then you can be competitive with the U.S. The fact that, a few years ago, the proposed merger between EADS and BAE Systems was killed indicates that Europe has not gotten to the point where you can make that serious decision.

But the final point is, quite simply, this is all about the military and the use of military force. When national governments are willing to actually cede sovereignty with regard to use of military force, then I would put forward the proposition that you are ready to see real progress in the EU. And that fundamentally means when all European countries are willing to have their troops fight and die because of French policy in sub-Saharan Africa, or German policy or Spanish policy in another part of the world.  Then we have a situation where you actually can talk about what the EU can do.

So going back to the beginning and to conclude, I would simply note that if the metric is “compared to what,” has the EU made progress? Definitely. Is it more capable than it was 10,  15 years ago? Absolutely. Has it actually managed to get to the point where it is a partner, collaborator, competitor, whatever word you want to use, with the U.S.? I would say the answer is no. And in that regard I would conclude by simply noting that the Third Offset Strategy indicates where you have serious tensions between the U.S. and European Allies.

But I promised to finish on a good news message and I will. One of the great things about getting old is you realize you just have not seen this for the first time. It is just the same thing coming around again and again. Whether it was France leaving the NATO unified military command in the 1960’s or the INF deployment issues in the 1980s, I would say NATO has faced more serious problems before.  And I personally believe it will get through this one successfully once again. Thank you.