The US – Jordan Defense Cooperation Agreement*

The Deputy Prime Minister and Minister of Foreign Affairs Ayman Safadi on 21 March announced that Jordan made a defence agreement with the United States that allows free entry of US forces, aircraft, and vehicles onto the kingdom’s territory. The agreement that was signed in January was approved by the government in February 2021. Yet, in an exceptional move, it bypassed the parliament, and the royal decree was published in the official journal on March 21, 2021. To dispel concerns regarding the agreement Safadi said: “The agreement does not authorize American forces to carry out combat actions inside Jordanian territory but is limited to training and counterterror cooperation.” He added the agreement came as a result of “long negotiations,” and that “the United States grants Jordan $425 million per year in military aid.”

In face of critique, Safadi further stated the tax exemptions stipulated would not affect the state treasury. But he added the agreement would include programs funded by the U.S. and that the provision of protection came within the commitment to international law. According to Safadi, the agreement “aimed to frame defence cooperation and reinforce US support for defence programmes and the kingdom’s security and stability through military training and equipment.”

The Hashemite Kingdom of Jordan and the United States are vital partners that work collectively for a set of common goals and objectives that basically aim at a stable, secure, and prosperous Middle East. In more practical terms, the US already uses Jordanian territory and especially KASOTC for training and exercises, and both on a bilateral basis and through NATO, the states take joint action on a wide range of regional security initiatives to include participation in  Global Coalition  against Daesh. As reiterated on the website of the U.S. Department of State, Jordan and the United States already maintain a formal Status of Forces Agreement (SOFA).

The agreement comes at a time of political and economic turmoil in the country. Earlier this month, Jordanian Prime Minister Bisher al-Khasawneh reshuffled his cabinet. He appointed six new ministers under the aegis of King Abdullah, who tasked him with restoring order after continuous failures by a series of governments to improve its citizens’ lives.

a. What Really is in the Agreement:

The defense cooperation agreement between the government of The Hashemite Kingdom of Jordan and the Government of the United States of America, which was signed on 31 January 2021, is comprised of a preamble, 19 articles, and an Annex. The various articles deal with different topics like security, freedom of movement, import, export, and taxation, use of public utilities and communications, environment and human health safety etc. The Annex is a list of locations where the terms discussed within the aforementioned articles shall be applicable. There are also articles that give unimpeded access outside the boundaries of the locations in the Annex.

In most general terms, the agreement lays a legal framework for the status of military personnel, contractors, vehicles, buildings and bases within Jordanian territory. The Article 3 of the agreement reads:

Jordan shall provide the United States Forces, United States individuals, United States contractors, and others as mutually agreed, unimpeded access to agreed facilities and areas for activities including visits; and training; and exercises; maneuvers; and transit; support and related activities; aircraft fueling; aircraft landing and hauling off the runway; and supply ships; and temporary maintenance of vehicles, ships and aircraft; accommodation of individuals; and communications; assemble and deploy forces and materials; prepositioning of equipment, supplies, and materials; security assistance and cooperation activities; joint and standardized training activities; humanitarian relief and disaster relief; and emergency operations; and other activities as mutually agreed by the two parties or executive agents.

The agreement has created a certain volume of political debate around the agreement, especially as regards, sovereignty rights. Here are some of the articles that prompt such discussions:

The United States Forces and the United States individuals are permitted to enter the Jordanian territory, exit from it, and move freely in it according to the requirements of this article. And they will not be asked for passports or visas to enter and exit the Jordanian territories, for military and civilian individuals holding Ministry-issued identification cards from the US defense with collective movement or individual travel orders. The two executives collaborate to facilitate the entry and exit of United States individuals into Jordanian territory. […] US individuals are exempt from all other immigration and displacement controls within Jordanian lands; Including the payment of any taxes; Or customs; Or fees are charged upon entry points into or exit from the Jordanian territory. Article 8Movement of aircraft, vehicles, and ships It is permissible for aircraft, vehicles, and ships to be operated by the United States Forces or on its behalf, entry, exit, and movement into the Jordanian territories and the Jordanian territorial waters freely, while respecting the relevant rules relating to safety, air and ground movement and marine. And those aircraft, vehicles, and ships are not subject to the boarding and inspection processes without US consent. Aircraft, vehicles, and ships operated by or on behalf of the United States Forces shall not be subject to payment of landing or platform fees, port fees, mandatory pilotage, navigation or overflight fees, transit fees, or other usage fees, including lighting and port dues imposed by Jordan. Or its apparatus, or any of its sub-departments;The United States Forces and the United States contractors pay the fees for the services requested and to obtain them at prices not less favorable; Similar taxes and fees that are no less favorable; What is paid by the Jordanian Armed Forces. Article nineteenEntry into force, amendment, and term This agreement shall enter into force on the date of the last complementary memorandum for the exchange of notes between the two parties which indicates that each party has completed its necessary internal procedures to enter this agreement comes into force. This agreement may be modified by a written agreement between the parties.Annex attached to this Agreement may be amended; Which forms an integral part of a written conclusion by the parties or their executing agents. The initial period of this agreement will be fifteen (15) years, and this agreement will be in effect in this period. Unless terminated by either party by written notice to the other side through diplomatic channels, the agreement will remain in effect even after this initial period. This notice should be made one year prior to the intended date of termination.

b. Does the agreement contradict the Jordanian constitution?

There is opposition to the agreement in that it violates the Jordanian constitution, especially the Article 1. The Article 1 of the constitution reads: “The Hashemite Kingdom of Jordan is an independent sovereign Arab State. It is indivisible and inalienable and no part of it may be ceded. The people of Jordan form a part of the Arab Nation, and its system of government is parliamentary with a hereditary monarchy”.

For the opposing figures, the way the agreement was made verifies their concerns are not unfounded. Islamist lawmaker Saleh al-Armuti decried the lack of parliamentary oversight and called on the government to cancel the accord, claiming it “violates the constitution and affects Jordan’s sovereignty”. 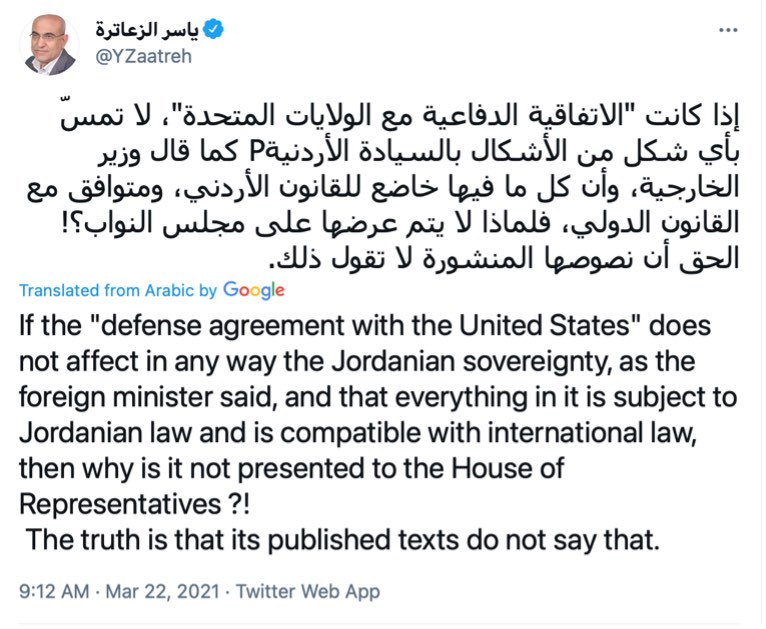 Yaser al-Zaatreh a political analysis, also twitted “If the ‘defense agreement with the United States’ does not affect in any way the Jordanian sovereignty, as the foreign minister said, and that everything in it is subject to Jordanian law and is compatible with international law, then why is it not presented to the parliament ?!”.

3. Who Benefits from the Agreement in What Ways?

From the US perspective, the country already has a SOFA agreement with Jordan. But having an additional defense agreement with Jordan means more flexibility in terms of troop deployment, exercise in and with Jordan, and troop deployments. Especially Jordan’s proximity to operation areas in the region has already been utilized by US forces -mainly located in Muwaffaq Salti Air Base – during Operation Inherent Resolve against Daesh. With this agreement, the US forces will have less burden of coordination for host nation support and have more flexibility in terms of shifting and deploying troops as need be. It will be able to use Jordanian territory for joint exercises like “Eager Lion”, for pre-combat deployment trainings and for launching cross-border counter-terror operations.

In terms of military cooperation and interoperability, joint action with the US troops has already boosted the Jordanian military to a high level when compared to other armed forces in the region. The country that is involved in NATO’s Mediterranean Dialogue partnership framework, has attained unprecedented practical cooperation levels with NATO, working together very effectively from the Balkans to Afghanistan and joining its exercises open to partners. Jordan also hosts NATO training for Iraqi forces at the King Abdullah II Special Operations Training Center (KASOTC) in Amman. The US is one of the main driving forces behind Jordanian involvement in NATO’s activities.

The US also supports Jordan in terms of provision of military education, training and equipment, and upgrade of its military infrastructure. This relative superiority of the Jordanian military among other militaries in the region has provided advantages for it.

4. The US Already Has a SOFA with Jordan. Why Now?

This might be the most important question we need to answer. As mentioned above, the US already has a SOFA Agreement. So why a new agreement and why now? Several conjectures can be made in this regard:

As regards timing, on January 20, 2021, Joe Biden was officially inaugurated as the 46th President of the United States. Being a democrat and having praised and promised a reversal to a multilateral approach to attain global peace and security, the new President-elect Biden might have wanted to operate within a clearly outlined legal framework with partners, especially in the Middle East.

But a more important aspect is related to its relations with Israel. The US has historically been supportive of Israel and depends on this ally for security cooperation. Yet, it is no secret that Biden has a more cautious approach to the US dealings with Israel due to two reasons. Personally, during his vice-presidency, Netenyahu embarrassed Biden twice. The first was by announcing further settlement construction in the West Bank on his 2010 trip to Israel. In the second case, the Israeli prime minister delivered, as a foreign dignitary, a 2015 speech in opposition to the Iranian deal to a joint session of Congress without a White House invitation. It has become clear that the US Presidents should take a more balanced approach with their dealings with the region by giving equal importance to regional Sunnite states, one of the important members of which is Jordan.

So against this backdrop, this latest agreement is likely a message to Israel that basically affirms a strong US military presence showing no need for Israeli support in its endeavors.

Why a new agreement: This is most likely because the current SOFA does not meet US requirements of its future intended moves in the region.

The latest US – Jordan Defense Cooperation Agreement that came right after the new President Biden was sworn in hints at a change in its dealings with the countries in the Middle East. The agreement, which can be re-framed as an update to the existing SOFA between the two nations gives unimpeded access to the US forces on Jordanian soil, air, and sea. The move more specifically may be intended to course correct its turbulent relations with Israel and articulation of its intention to make Jordan the first step to inform other Sunnite countries of the region of US leadership with a more balanced approach to the solution of the regional problems.

Nour Moufed Aldahabreh is currently following an Advanced Master’s Program in European Integration in the Vrije Universiteit Brussel (VUB) and is currently a project assistant intern at Beyond the Horizon ISSG.
*The original text of the agreement in Arabic has been taken from the Ammon News website: https://www.ammonnews.net/article/599768.
Subscribe to Newsletter