The Impact of PESCO for the European Defence Industry 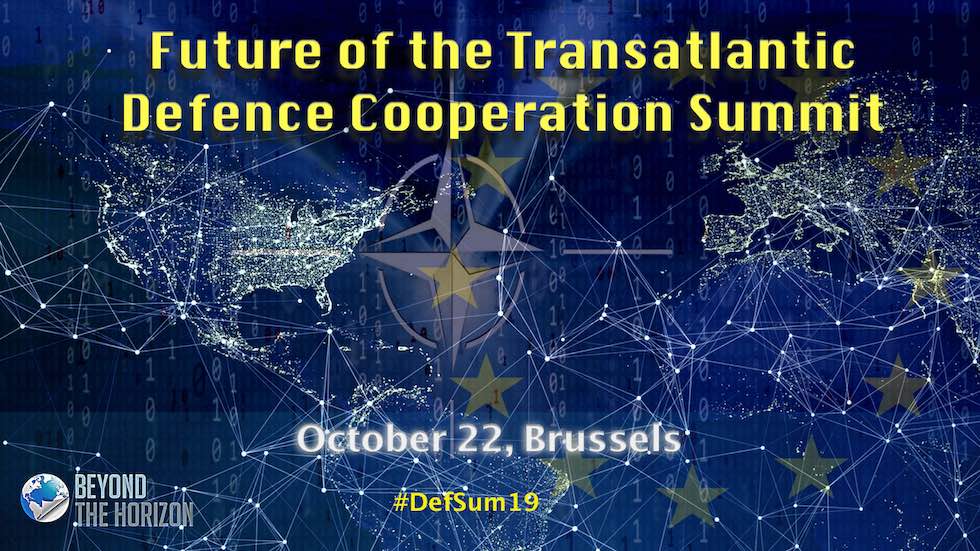 Thank you very much for having me via video-link. Congratulations to the friends at Beyond the Horizon for mounting this impressive conference. I apologise for not being able to join you in person and would like to thank the organisers for allowing me to beam in from Berlin.

Without further due, I’d like to present a few findings from academic research into the implementation of PESCO projects and I have a short PowerPoint presentation to provide visual support to some of the observations. I should stress that these are very early observations indeed, based on the data gleaned from the launch of the first two batches of 17 projects each. I know full well that we are only in the first year of the implementation of the National Implementation Plans (NIPs), which participating Member States have submitted in January; that the methodology of the Coordinated Annual Review on Defence (CARD) has only just been embraced after completion of a successful trial run; that the bigger financial envelopes under the European Defence Fund (EDF) still have to come online; and of course that the implementation of capability development plans (CDPs) takes a very long time to bear fruit.

The first thing to do when talking about PESCO, I think, is to remind ourselves that this is the most inclusive form of enhanced cooperation that the treaties know. It has a unique legal basis in Articles 42(6) and 46 of the Treaty on European Union and binding commitments have been laid down for participating states in Protocol No 10. But as any form of enhanced cooperation it is open for those member states which chose to stand aside when it was launched to join a later stage when they meet those commitments.

The decision-making in PESCO follows the logic of CFSP through unanimity, even if a later Council decision on the governance PESCO allows for a passerelle towards qualified majority voting (QMV) if and when participating states in individual PESCO projects agreed to that. This is of course future music, not for immediate consumption.

The definition and raison d’être of PESCO are the projects, which are shaped in a modular fashion on the basis of voluntary contributions and 20 so-called ‘more binding commitments’, where the enforcement mechanism relies on transparency and political peer pressure rather than on any single market-type of legal enforcement mechanism. The exclusion of a state of that does persistently not meet those commitments, a suspension mechanism provided by the Treaty, is akin to the kind of ‘nuclear option’ which we’ve seen in other fields, like the rule of law, and not to be expected anytime soon.

The first batch of 17 projects has clustered PESCO cooperation in a number of fields, with capability and logistical training being the most populated ones and the lesser in maritime and cyber security. Now, what I want you to briefly show you on the basis of our research into the composition of the PESCO projects and the changes which have happened into the status (membership or observation) of participating states from the first to the second wave and we’ll probably see those trends amplified when the third batch of PESCO projects comes online in November 2019. 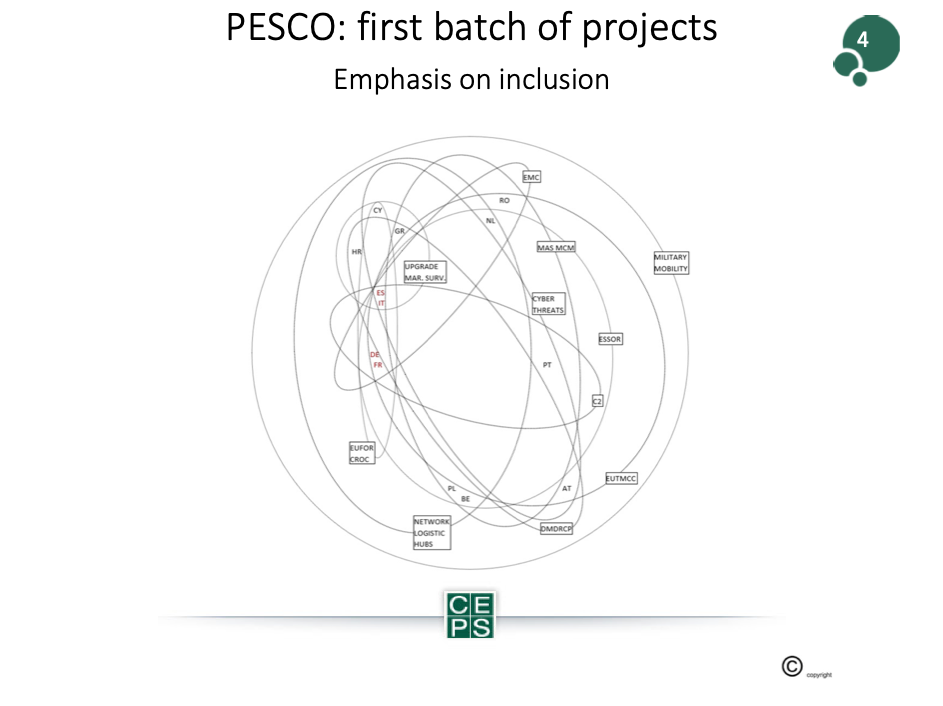 You know, of course that the German push for PESCO to be as inclusive as possible has led to 25 EU Member States participating at the primary law level, with the UK on its way out of the EU, Malta invoking constitutional neutrality and Denmark having a permanent opt-out of CSDP. The first batch of –largely– off-the-shelf projects is indeed quite inclusive, as shown in  in the rather encompassing/circular form that emerges from the Venn diagram above. By weeding out the less populated projects and focusing on those that are really heavily populated it becomes clear that participation centres arounds the four big member states: Germany, France, Italy and Spain. Military Mobility, which was ‘borrowed’ from NATO and furthered through the EU framework, is the most inclusive project (24 member states participating, with Ireland for obvious reasons having excluded itself from that project).

How different the image when looking at the second batch of projects. Where some Member States and especially France has upped their game in terms of PESCO participation, as can be seen in the Venn diagram below. But what is striking in the visualization of the top tier of second batch of projects is the more elliptical form, which points toward a more exclusive form of cooperation, with costlier projects led by bigger member states with solid defence industries and other participants having taken a bit of time to wait and see, opting to put their eggs in the second basket of PESCO projects. 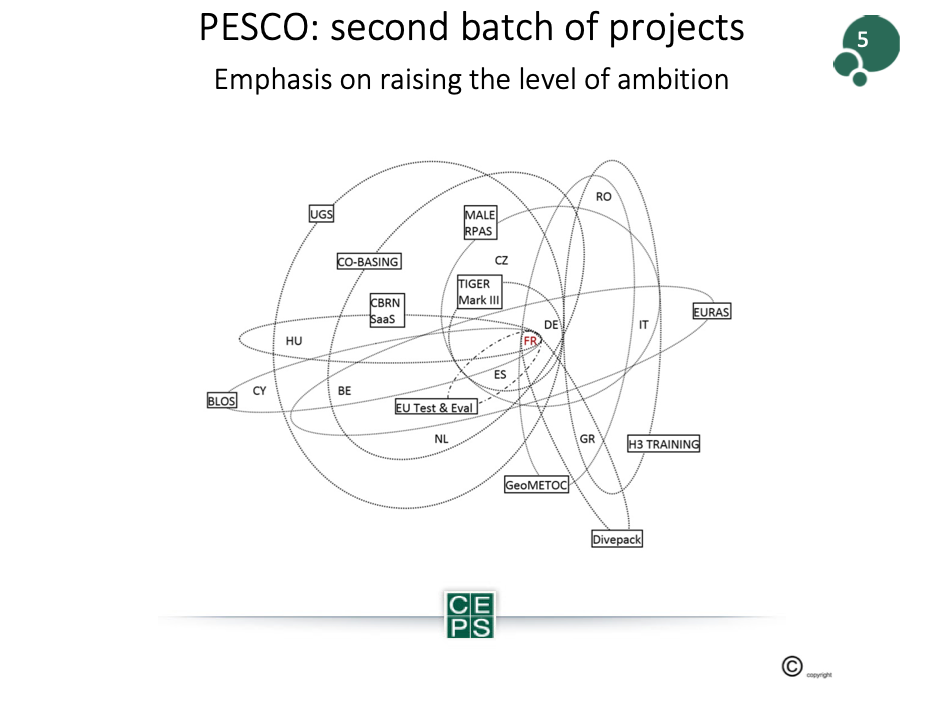 If you break this down according to the clusters that I’ve showed earlier on, then it’s clear that the most populated, i.e. inclusive forms of cooperation in PESCO projects are in the enabling and joint capabilities sphere, military mobility and network logistical hubs. 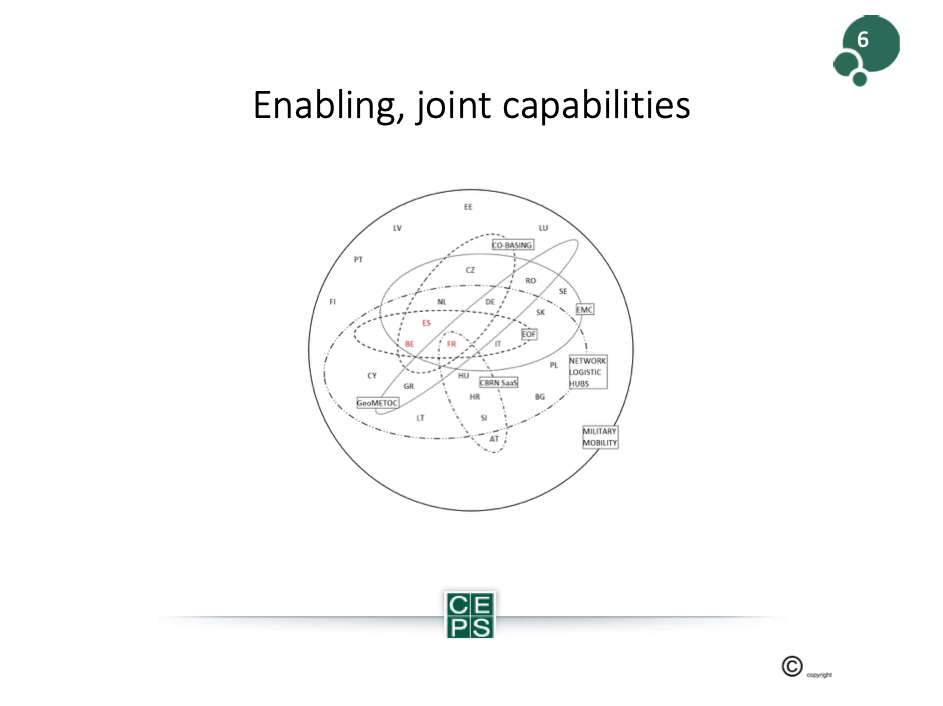 Cooperation in areas like maritime capabilities is far more exclusive and of course of one expect the littoral states to participate in particular. Greece is quite heavily invested in them. 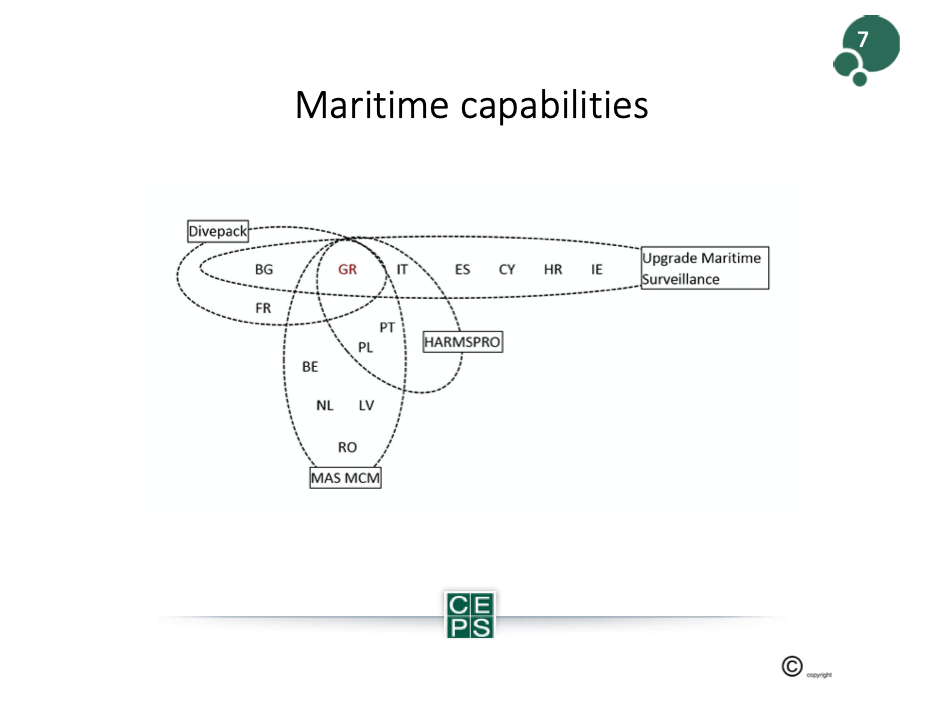 Whereas in air systems and space capabilities you have for obvious reasons the existence of only a few handful of ‘champions’, so to speak, in certain member states, much more siloed forms of PESCO projects exist. 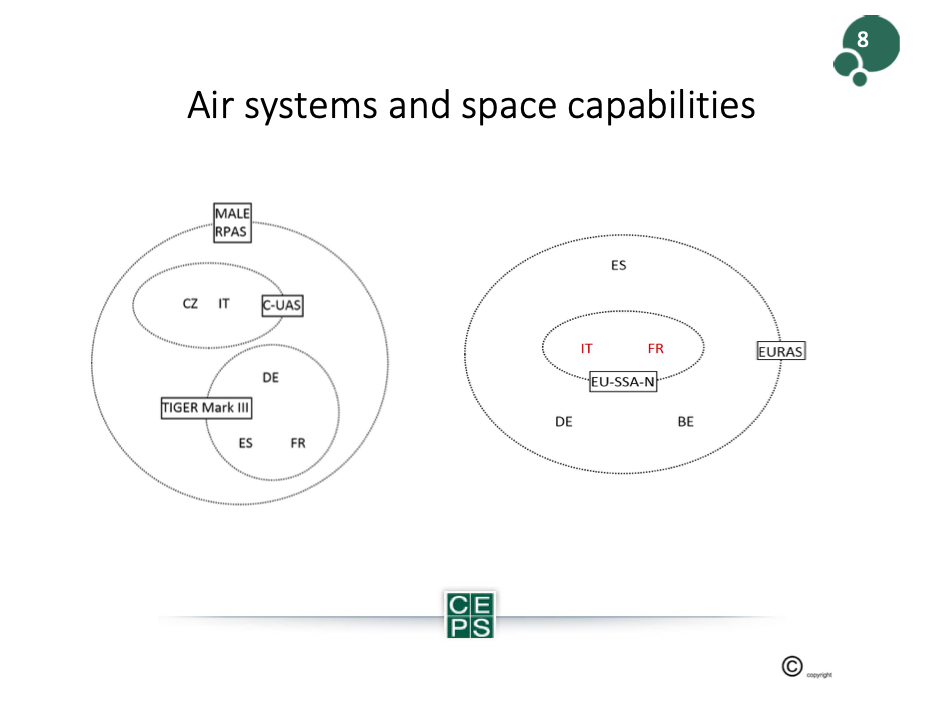 If one looks at the number of bilateral PESCO projects therefore only two or in this case in the graph below, three member states participate and we have almost 13 projects out of the current 34 that have such a rather small membership of participating states. Obviously, these are again the costlier ones where major industries, in fact, define member states’ leads in those projects. 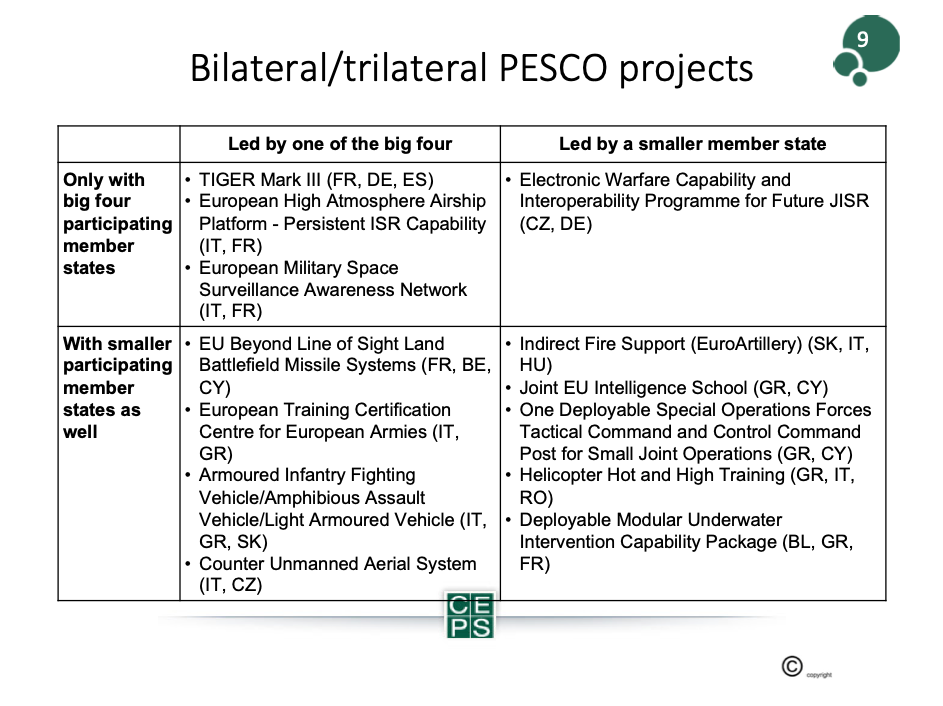 From these early observations one can nevertheless draw some preliminary conclusions. I’d say that, at first, the aim of PESCO was to create an upward regulatory and economic convergence between member states’ defence industries. Especially for those EU Member States that are also Allies to NATO, PESCO projects intended to raise the level of commitment entered into under the North Atlantic Alliance. When looking at the projects and how they are populated (or in some cases depopulated), it would indeed seem that the level of ambition has increased from the first to the second batch. It has come at the price of exclusion though. Counterintuitively, in as of yet largely unexplored areas of national defence industrial development, i.e. areas where one would expect EU value-added (particularly the cyber; CERTs), we are unfortunately witnessing a depopulation by big member states like France, choosing alternative avenues for their investments. We’ll have to see whether these early trends are confirmed or not in the wake of the launch of the third batch of PESCO projects.

Whatever there may be of this, below the rather inclusive primary law level of enhanced cooperation, we see a microcosm of differentiated integration emerging at secondary – project – level, with new – although slightly wider – silos in clusters of defence industry . This is certainly not in line with the rhetoric with which the EU institutions have accompanied the launch of PESCO. If there’s any policy recommendation to be teased out at this early stage, it would really be for the new incumbents at the helm of the EU Commission and the EEAS to focus on implementation and to dial down the rhetoric. That’s all I want to contribute at this stage. Thank you.

Note: An updated and expanded version of the speech was published by CEPS in the wake of the publication of the third batch of PESCO projects. The paper is available at: https://www.ceps.eu/