The EU Energy Dependency on Russia and Historic Opportunity for Independence 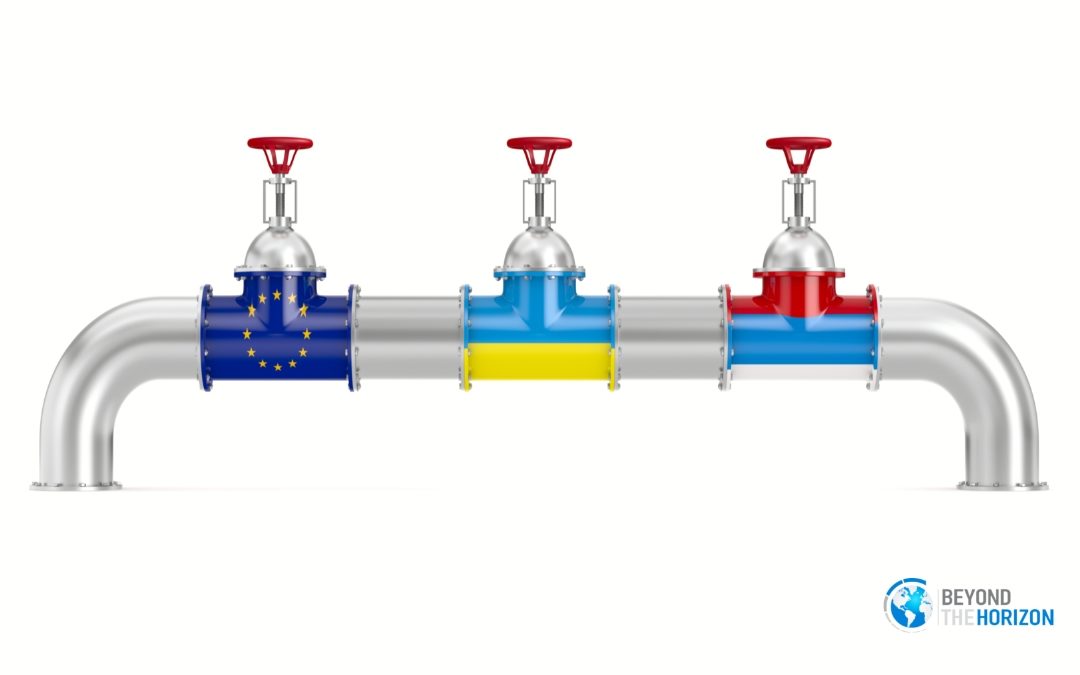 The EU Energy Dependency on Russia and Historic Opportunity for Independence

To exact a toll on Russia after its offensive into Ukraine and to squeeze channels that feed Russian military and economic might, the EU tries to impose onerous sanctions on the Russian economy. The EU’s dependency on the imports of natural gas and other raw materials including nickel and coal from Russia has been extensively discussed. The issue is controversial as those imports create the revenue to maintain Russian disruptive efforts. Yet, the EU also faces lack of alternatives to substitute especially the Russian gas in the short term. The EU will correct course to preserve the ability of the households and the industries to reach affordable gas. This brief aims to show the level of dependency and offer policy options to alleviate that.

The Extent of EU’s Dependence on Russian Oil and Gas

The break-up of European primary energy imports in the last decade has featured Russia’s primacy. According to Eurostat, the share of Russia among overall EU natural gas imports has risen from 30,6% in 2010 to 38,2% in 2020 whereas a similar rise is seen in hard coal, from 22,4% to 49,1%. Although showing a decline from 34,7% in 2010 to 25,7% in 2020, Russia also maintains its position to be the primary exporter of crude oil to the EU. Overall, the EU imported %97 of its oil and %83.6 of natural gas demands in 2020. In 2021 alone, the EU paid approximately 99 billion euros for the imported energy products from Russia. 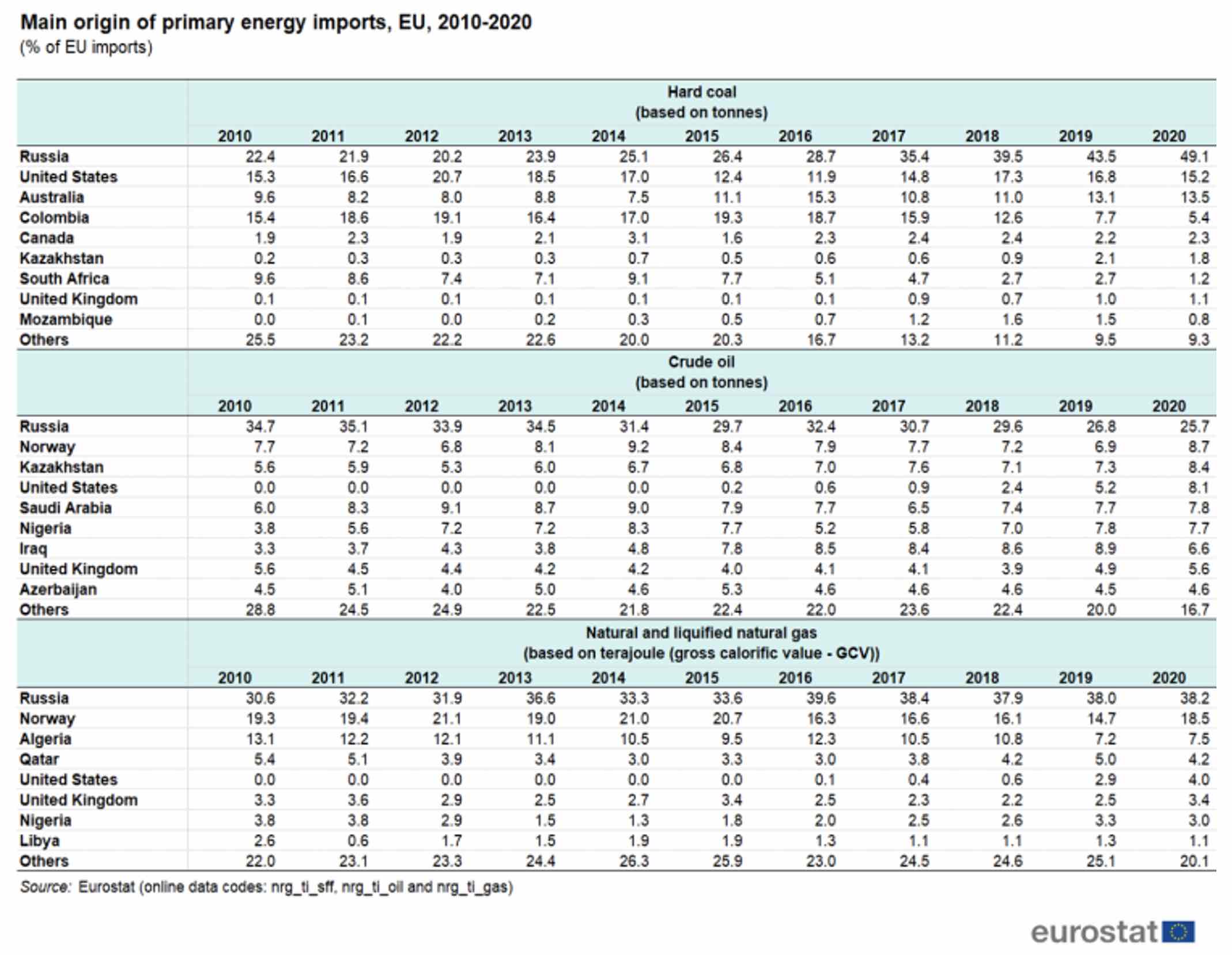 Despite this obvious dependency and the harsh opposition from the US and Ukraine, the EU has not taken effective measures to diversify its energy sources enough to preclude the eventuality we are facing today. For example, Germany which imports %55 of its natural gas from Russia gave its permission for the construction of the Nord Stream 2 in 2018. It halted the approval for Nord Stream 2 just one day before the invasion of Ukraine. The EU’s energy relationship has deepened over the years despite numerous examples of Russia’s aggressive gas policies that clearly demonstrate the Russian intention to use oil and gas export as a political weapon in its foreign policy. Due to its geographical proximity to Russia and relatively low prices, the EU has preferred to heavily rely on imported natural gas from Russia in order to reduce the share of relatively more expensive hydrocarbons in the Middle East.

Energy Export as a Political Weapon for Russia

As a national champion in gas exports, Gazprom has been an effective political weapon for Russia to shape the political environment in and around Europe. Putin defined Gazprom as “a powerful political and economic lever of influence over the rest of the world”. For instance, Gazprom reduced the price of the gas by one-third for Ukraine after the rejection of Yanukovych of a trade deal with the EU in 2013. However, Gazprom did not hesitate to increase the gas price by %81 when a pro-Western government came to power in Ukraine after the Maidan revolution. Russia also adopted the same approach by threatening to cut the gas flow after the start of the discussions in Moldova about signing a free trade agreement with the EU

The Russian economy is profoundly dependent on revenues from oil and gas exports, which make up nearly one-third of the Russian federal budget. Before the invasion of Ukraine, the oil and gas prices in the international energy market had soared due to the recovery of the world’s economies from the restrictions during the pandemic. The dependence of the EU on Russian hydrocarbons in the cold winter of 2022 and increasing revenues of Russia from the oil and natural gas exports to the EU gave President Putin a historical opportunity to invade Ukraine. 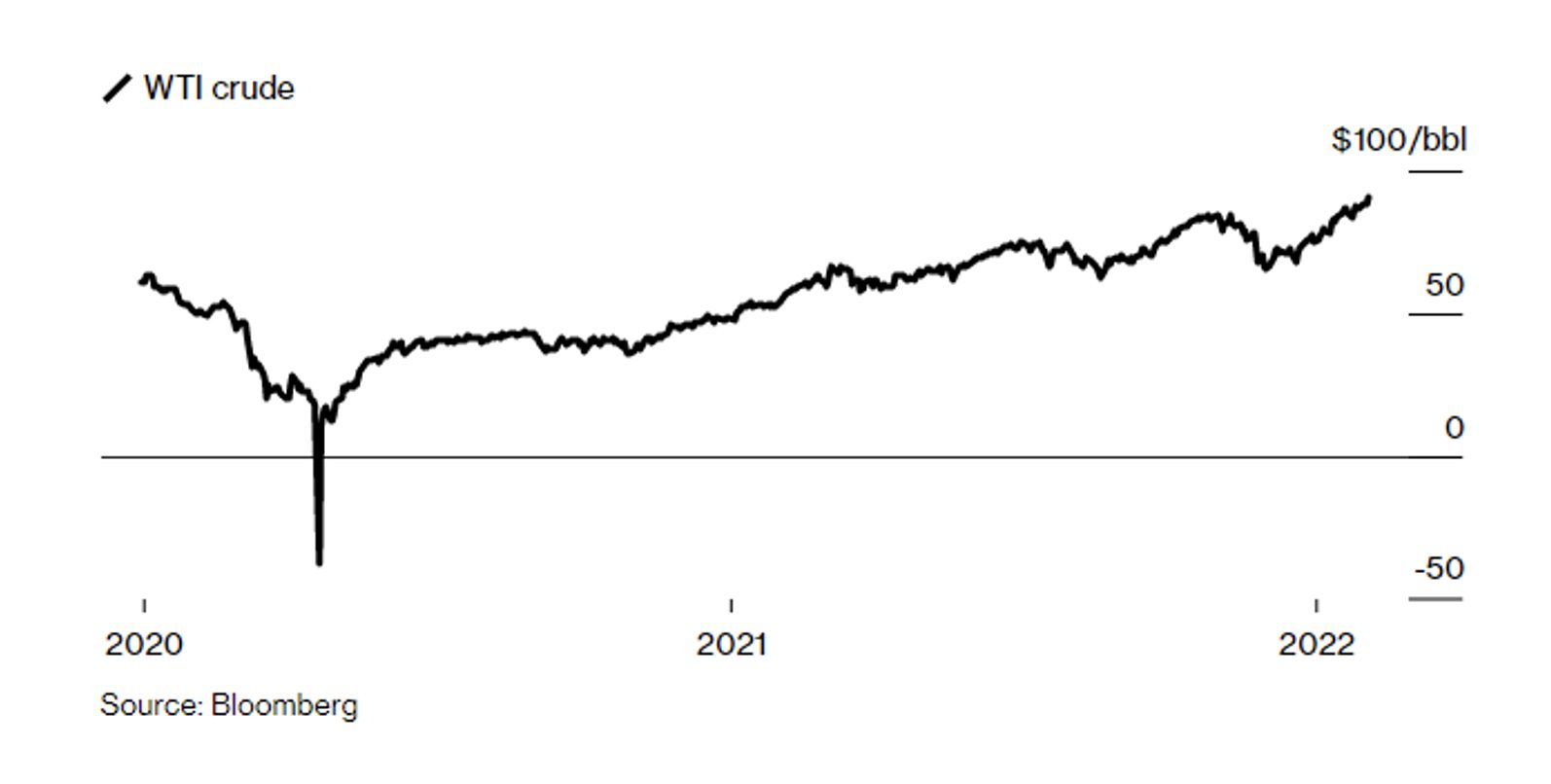 The economic interdependence between Russia and the EU is crucial for the Russian economy. Russia, as a poorly integrated country to the world economy, conducted nearly half of its exports to the EU market before the invasion of Ukraine. Therefore, it is rather difficult for Russia to find an alternative export market that will substitute the EU market. The EU strongly supported the membership of Russia in the World Trade Organization in 2012. Before the annexation of Crimea by Russia, the efforts of the EU in the economy, research, trade, culture, education and security to build a strategic partnership with Russia did not yield the desired outcome for preventing Russia from its aggressive policies

EU Response to Invasion of Ukraine

The European Union was caught quite unprepared for the invasion of Ukraine in terms of its energy policies. The fact that the natural gas storage level is around 30% and there is no alternative natural gas that can be imported instead of Russian gas in a short time, the possible shocks that a sudden natural gas cut may cause in the society prevented the EU from suddenly stopping gas imports from Russia. Despite the presence of many indications that Russia would invade Ukraine, the EU did not reveal any concrete plan related to cutting the flow of the billions of Euros to Russia for the payment of imported oil and gas before the invasion of Ukraine.

On 8 March 2022, the EU Commission introduced a new plan named REPowerEU to cut the Russian gas import by two-thirds this year and to totally stop its reliance on it by 2030. The main pillars of this plan are to diversify the alternative pipelines, increase the amount of LNG import, promote the storage of natural gas and enhance the energy efficiency measures. Frans Timmermans, the executive vice-president of the EU Green Deal, stated that “By the end of this year, we can replace 100 bcm of gas imports from Russia. That is two-thirds of what we import from them. This will end our over-dependence and give us much-needed room to maneuver.” In the short term, the EU plans to diversify its energy supply chain by importing additional gas from Qatar, the US and Azerbaijan. The EU Commission is preparing a legislative proposal about determining the minimum amount of gas storage.

The invasion of Ukraine coincided with the latest report of the Intergovernmental Panel on Climate Change (IPCC), which has revealed the terrifying dimension of Climate change. In line with the targets of the EU Green Deal as a response to the catastrophic impacts of climate change, the EU wants to be the first carbon-neutral continent by the year 2050. The EU’s efforts to cut the use of fossil fuels within the context of the EU Green Deal is another driving source to take bolder steps for getting rid of gas and oil imports from Russia. According to REPowerEU, the EU plans to double up its targets related to renewable energy including biomethane production from biomass sources, using hydrogen as a source of energy, and finally unlocking the potential of solar energy.

It seems that the major strategic mistake of the EU was to embrace the idea that diplomatic efforts and gradual economic sanctions would have been enough to deter Putin from attacking Ukraine. Trying to ease the demands of undemocratic and authoritarian leaders may seem to be effective in the short term, but this policy can sharpen the appetite of those leaders to threaten both regional and global security in the long term.  Moreover, the strategic blindness of some EU members in deepening their economic relationship in order to benefit from relatively cheap oil and gas imports became an advantage of Putin to restrict the capacity of the EU to take effective measures against Russia after the invasion of Ukraine.

On the other hand, the invasion of Ukraine by Russia has given a historic opportunity to the EU to get rid of its structural inertia and boiling frog syndrome in its foreign and security relationships. As Thomas Fuller stated, “a stumble may prevent a fall”. The current energy crisis caused by the dependency on exported gas and oil from Russia can help the EU to accelerate its efforts to reach more ambitious targets within the context of the EU Green Deal, strengthening its renewable energy infrastructure and gas storage capacity. The EU can also use its economic power in international trade to widen the application of the new regulations in the context of the EU Green Deal to guide other states to reach the net-zero target by the year 2050.