The backlash against Gender: Poland, Far-Right and Beyond 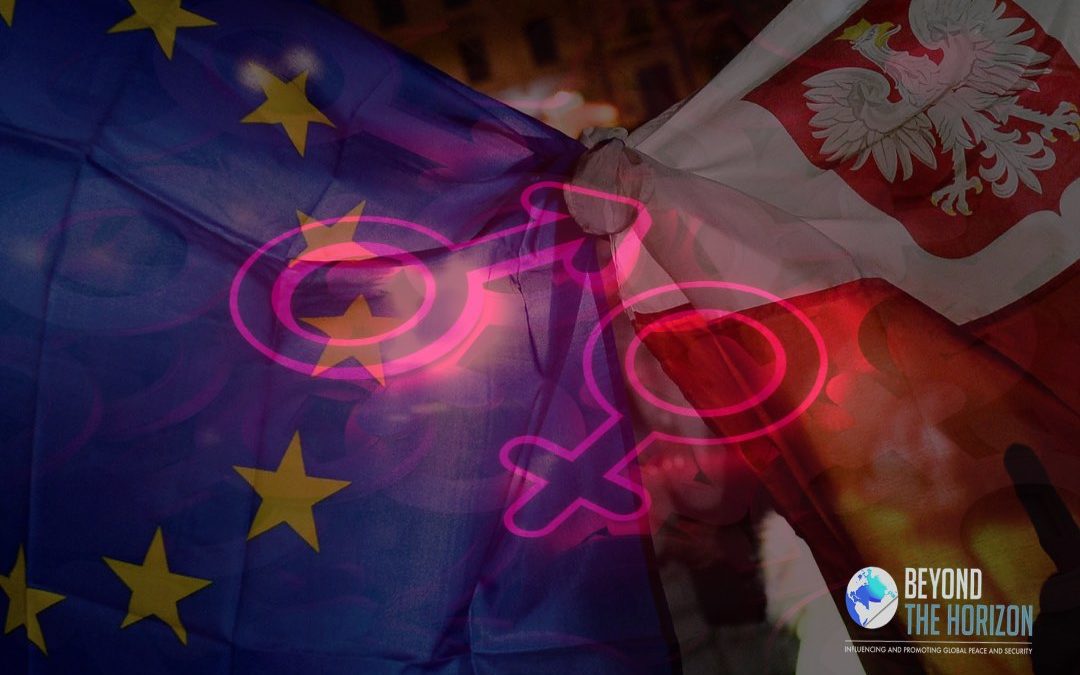 In October 2020, Poland’s Constitutional Tribunal, the country’s highest court, ruled legislation allowing women to seek an abortion on the grounds of severe foetal impairment as “incompatible” with the country’s Constitution. Through this ruling, abortion in Poland is now only authorized in the case of rape, incest, or threats to the mother’s life, making it practically impossible for Polish women to seek an abortion. The ruling came as a response to a motion from right-wing MPs. In February, MEPs called on the European Union earlier this year to step up against this backsliding in fundamental rights.  According to Dunja Mijatovic, Council of Europe Commissioner for Human Rights,  “the Constitutional Court ruling means underground or abroad abortions for those who can afford it and even greater ordeal for all others.”  The ruling and the protests that erupted following its announcements illustrate the deep divides that fracture Polish society. These divides were already visible in the summer presidential elections of 2020 when the conservative Andrej Duda won with a particularly narrow margin.  While the ruling was a victory for the Catholic Church and Duda’s supporters, the impacts for Polish women are critical. According to Leah Hoctor, the regional director at the Center for Reproductive Rights NGO, “laws prohibiting abortion do nothing except harming women’s health and wellbeing by pushing it underground or by forcing women to travel to other foreign jurisdiction, to other countries, to access care.”

While the new measures are particularly worrying, questions related to the protection of life, including abortion, are an exclusive competence of Member States. This means that potential sanctions by the European Commission are limited. However, talks of additional pressure are emerging among MEPs because Poland is already subject to several EU infringements procedures.

This major setback for women’s rights in Poland is not entirely surprising. Indeed, the Constitutional Tribunal includes high numbers of PiS, the right-wing Law & Justice governing party. Under PiS governance, Poland’s progress on gender equality has backtracked, and the country has seen a revival of the family ideology and its so-called ‘fundamental values.’

In April 2021, the Polish Parliament voted a bill titled “Yes to Family, No to Gender,” which called for the withdrawal from the Istanbul Convention, a landmark treaty aimed at counteracting violence against women, including issues of marital rape and female genital mutilation. The political process was similar to the one used for the abortion rulings: the Convention was referred to the Constitutional Tribunal for review, bypassing official parliamentary procedures. Prime Minister Mateusz Morawiecki claimed that the Convention was under review because of its definition of gender, considered ideological and thus harmful to the Polish society. Indeed, the Convention understands gender as a social construct and explicitly includes the LGBT community. Therefore, it was considered a threat to traditional Polish families and accused of promoting homosexuality, thereby corroding Polish national values. European MEPs heavily criticized the move, and argued that the Convention aimed to tackle domestic violence and protect victims and thus had nothing to do with ideology.

Another recent example is the lobbying by Poland and Hungary to remove the phrase ‘gender equality’ from the Porto EU social summit declaration on furthering social cohesion in the European Union. While the move might seem harmless and only related to linguistics, it has significant impacts. Indeed, erasing the language equates to erasing gender equality as a principle itself. Thus, on the grounds of ‘traditional social values,’ Poland’s government backs up conservative Catholic social values, which go together with rising state controls and heavy politicized influences over the media, judiciary courts, and academia. The revival of the “traditional family ideology” and the backlash against the concept of ‘gender,’ is a politically charged strategy of far-right groups to undermine progress regarding women’s rights, sexual and reproductive rights, and LGBT rights.

2. What is happening in Poland?

The backlash is not exclusively directed at women’s rights. There is indeed a broader context of decreasing legal protection of minorities and growing institutionalization of hate speech, homophobia, and transphobia. This anti-LGBT rhetoric has been amplified and sometimes encouraged by certain politicians and media personalities. Being part of the LGBT community is understood as a choice, a lifestyle, and something that individuals have to control.  Since early 2019, some Polish municipalities adopted resolutions declaring them “zones free from the gender and LGBT ideology.”  Within those zones, covering more or less 30% of Polish territory, there is solid opposition to promoting anything related to LGBT – rights and controlling the financial sources and methods of organizations assumed to be related to LGBT advocacy. As a result, the European Union cut funding to these municipalities. However, the Polish government reacted accordingly and filled in the financial gaps.

The ‘Family Charter,’ signed by the Polish President, is another example of the ramping backlash against LGBT rights. It explicitly commits to opposing same-sex marriage, the adoption of children by same-sex couples, and the forbidding of ‘LGBT ideology’ in Polish public institutions.  In December 2020, Poland’s record of LGBT rights was classed as the worse in the European Union by the Council of Europe, denouncing the role of the governing PiS Law and Justice party in the degrading situation.  In the past, President Andrezj Duda has associated the so-called “LGBT ideology” with communism, turning it into a political choice. Recently, Poland went further by including the transgender and LGBT community among social pathologies such as drug addiction or beggary. This was in the context of a new textbook for police officers and called out by the left-wing opposition party. It further stigmatizes a community that is already facing severe discrimination and threats.

The backlash against gender equality is far from being new. The concept pf ‘gender ideology’ dates back to the 1990s and was developed by the Vatican, Catholic scholars, and activists. Broadly, ‘gender ideology’ refers to a set of notions that revolve around the concept of radical ‘gender feminists’ and the ‘homosexual agenda’ advancing an ideal undermining the natural order of things. Thus, gender ideology would be a threat to the basis of the family, and thereby, to society itself. Indeed, the fear is that ‘gender ideology’ pushes individual identities beyond traditional social expectations. The term functions as an umbrella term and allows the sublimation of multiple issues into one manageable threat to mobilize against emotionally. ‘Gender ideology’ is understood as a threat against the three N’s: Nature, Nation, and Normality.

The backlash in Poland cannot be analyzed entirely through the country’s domestic situation and has to be replaced in the broader framework of a growing transnational movement made of numerous actors, including governments, right-wing think tanks, the Catholic Church, and other far-right groups. There are three different types of actors: the old, the new, and the allies. The old actors group comprises the Catholic Church and right-wing think tanks generally based in the United States, which have established strong ties with power centers across the globe. The new actors emerged in the last decade, specifically in opposition to ‘gender ideology,’ and include concerned citizens initiatives and political parties, institutions producing anti-equality material, or government-backed NGOs. The last category, allies, are primarily academics, politicians, and journalists or media outlets.  This diverse range of actors has increasingly started to produce alternative norms inimical to universal human rights and gender as a concept, including gender studies, international conventions such as the Istanbul Convention, sexuality education, etc.  By attacking gender equality progress, this movement undermines women’s rights, LGBT communities, and civil society itself. However, while the focus is on the concept of gender itself, it is crucial to understand that the backlash is about maintaining power and promoting specific social and political hierarchies. In the case of Poland, for example, public homophobia was part of a broader strategy to assert a national identity against migrants. In other words, opposing gender equality progress is a way to claim the failure of democratic representation and reject broader aspects of the current European socio-economic order.

While significant progress was made to advance gender equality in Europe, the recent backlash is growing, not only in Poland but several other EU countries. As such, key issues such as access to abortion, sexuality education, LGBT rights, and the ratification of the Istanbul Convention have been strongly targeted in different national settings. The anti-gender backlash was parallel to the steady rise of populist, far-right, nationalist, and xenophobic EU Member States, such as Hungary, Austria, Italy, and Poland. The anti-gender narratives in Europe build on existing fears, such as the loss of national identity, migration, or the decrease of ‘traditional values.’ A key example is the coordinated campaigns against the Istanbul Convention, described by its detractors as promoting ‘gender ideology’ and seeking to introduce a third gender. The Slovak Parliament voted in February 2020 a motion not to ratify the Convention, while the Bulgarian Constitutional Court ruled that the Convention did not comply with the Bulgarian Constitution, in a process similar to Poland.  In March 2021, Turkish President Recep Tayyip Erdogan withdrew his country from the Convention using a presidential decree. The move came after intense lobbying from religious and conservative groups against the Convention. However, the word ‘backlash’ is not entirely adapted for the MENA region, as gender equality has been continually contested. The actors opposing it range from authoritarian rulers and institutions to Islamist parties and conservative NGOs. In Turkey, which has a solid and independent feminist movement compared to other countries in the region, ‘gender ideology’ and anti-gender concepts did not exist until recently. In 2011, the governing party of Erdogan started to bypass gender equality laws and promote pro-natalist policies promoting motherhood. The rhetoric of protecting the family and refusing ‘gender ideology’ is very similar to the European discourse.

It is no coincidence that backlash against sexual rights and health rights, gender equality or LGBT communities, has increased parallel to the rise of populist, far-right, nationalist, or xenophobic ideologies in EU countries. The interconnectedness between anti-gender movements and the far-right is evident, as illustrated by the overlaps in their discourse. Both right-wing politics and anti-gender trends resist globalization and are sceptical of international norms. In addition, nationalism, racial anxieties, scapegoating, and the construction of conspiracy theories are present in both discourses. However, anti-gender can also be taken by left-wing actors, and right-wing politics sometimes use feminist rhetoric to support xenophobic and racist arguments. Anti-gender and right-wing movements cannot be equated, but the interconnectedness between the two movements is apparent. The attacks on gender equality go directly against EU values and commitments, and against the provisions and purposes of international human rights ratified by the EU Member States.

Thus, it is time to analyze the anti-gender backlash within the broader context of the general decline of freedom globally and, more specifically, the decreasing space for civil society. For the European Union, hailer of humanitarian values, upholding rights internationally should also mean ensuring that political minorities have the same rights in their home countries. As the trend in gender backlash has considerably grown during the Covid- 19 pandemic, it is clear that more investment in advancing gender equality internationally and support for feminist civil is required within the EU.