The Afghanistan Peace Process: What About Women? 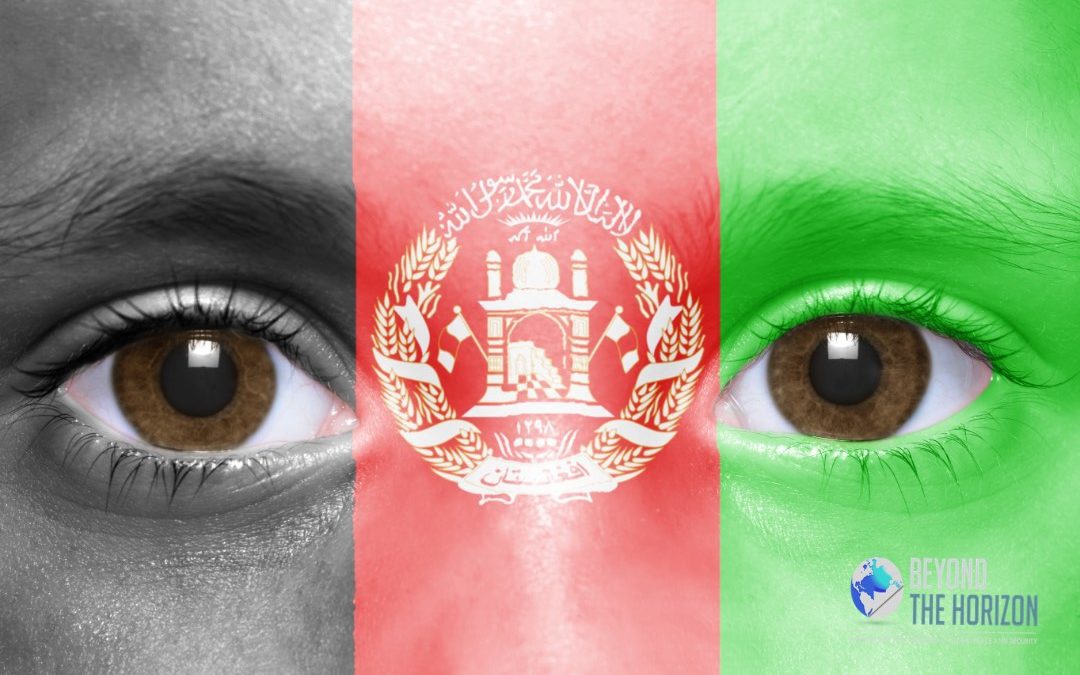 Back in February 2019, ground-breaking peace talks between the U.S. government and the Taliban took place in Moscow, fostering the possibility of a negotiated peace in an unpreceded way during the 17-year-long conflict. The peace table, however, did not represent half of Afghanistan’s population. Indeed, women were largely absent from the peace talks. Furthermore, any agenda on women’s rights was off the table, echoing the brutal treatment of women in Afghanistan under Taliban rule.

In the current peace talks between the Afghan government and the Taliban in Doha, Qatar, women’s participation is still meager, despite tremendous advocacy for greater inclusion. On the Taliban side, it remains at zero-level, while there are four women out of twenty-one negotiators on the side of the Afghan government. As such, the lack of women’s involvement is a clear warning sign on rollback on human rights, specifically women’s rights. This comes despite key actors such as the EU and international organizations highlighted the importance of protecting human rights, with a particular focus on women’s rights. Furthermore, the Afghan government had adopted a National Action Plan on UNSCR1325, which relates to the Women, Peace, and Security agenda of the UN Security Council.  As such, it committed to fifty percent women’s participation at the top-and mid-level positions on peace and conflict issues, but this has not been concretely fulfilled.

Today, the withdrawal of U.S. and international troops and the faltering prospects of successful peace talks in Doha are particularly worrying prospects for Afghanistan’s women and girls. Talking to the UN Security Council in 2020, activist Zarqua Yaftali stated that “our hard-won gains can be snatched away without warning. The bitter memories of Taliban rule haunt us daily. These experiences are still a reality for many women and girls living in areas controlled by the Taliban, where freedom is severely curtailed.” The withdrawal of U.S. troops is especially worrying as the UN reports have shown escalation in violence against civilians since the start of the peace talks in September 2020. Recordings show a 45% increase in casualties of death and injuries, compared with the same period in 2019. While the majority were ascribed to non-government actors, mainly the Taliban, one-fifth was ascribed to government forces.

The historical relationship between Afghanistan and Afghan women is far from being equal. From 1996 to 2001, as the Taliban ruled the country, harsh and discriminatory policies against women were institutionalized. Indeed, the Taliban ideology is particularly misogynistic and prevented girls from enjoying fundamental rights such as education or healthcare.

Post – 2001, Afghan women enjoyed significant progress, despite the harsh environment that does not fully implement their rights. In 2004, women’s constitutional rights and status came into force, giving them a position to challenge power hierarchies and reshape institutional structures more inclusively. In addition, a Ministry of Women’s Affairs was established, with provincial offices being primarily staffed by women. In 2004, the Afghan Constitution prescribed quotas for women’s political participation at the Afghan Parliament. Furthermore, despite facing enormous challenges such as harassment and disproportionate impacts of conflicts, Afghan women are increasingly participating in government affairs, making up 28% of the Afghan legislative body, which is higher than the global average. Since 2001, more than 150,000 Afghan women have been elected to serve as community representatives on community development councils, the majority in rural areas.

Today, while women and girls in government-controlled areas enjoyed great strides in health care, education, and engaged in public life, others in Taliban-controlled areas were still deprived of fundamental rights and freedom of movement.  As such, life in Afghanistan remains hard for women, and the country is still the second most dangerous country to be a woman, primarily due to the high rates of violence against women and discrimination and lack of access to health care and education.

Traditionally, peace processes have brought the belligerent parties to the negotiating table, and those are rarely women. This justifies women’s sidelining, narrowing the understanding of conflict as “men with guns” affairs. In the specific context of Afghanistan, due to the difficulties women face, they are believed to be unable to participate in negotiations with the extremely patriarchal Taliban runs deep. However, this assumption is far from reality. Women such as Palwasha Hassan have been working behind the scenes for years to foster peace by engaging with local Taliban leaders. As a lifelong peace activist, Palwasha Hassan has served on the governments’ High Peace Council, which pursues peace efforts with the Taliban. Together with other women activists, she presents the case for women’s rights using a framework of Islamic values that Taliban members recognize. Through this strategy, women have been able to get the Taliban in their communities to negotiate and have won small victories. However, according to Palwasha Hassan, the international community failed to acknowledge the progress she and other women have achieved together. These women could achieve significant progress if supported by international bodies and official negotiators, yet official negotiators overlook them.

Thus, the lack of recognition towards women’s contribution to peace persists, despite research demonstrating that a peace process is 35% more likely to last for fifteen years if women are involved at the negotiating table, either through observer status, inclusive commissions or as total participants. Evidence from the Philippines, Liberia, Northern Ireland, and other regions where women contributed to peace processes has illustrated that women’s contributions were valuable. However, it is critical to note that the positive relationship between women’s participation and the likelihood of successful agreements is correlated to the strength of women’s influence.  For example, women’s groups allowed into the negotiations exclusively with an observer status might find it harder to assert influence that women fully involved in the peace process. Even if women have only a  moderate influence, results from quantitative research by the International Peace Institute demonstrate that women’s inclusion is always correlated with a greater likelihood of reaching an agreement.

Even if women negotiators are currently involved in the peace talks with the Taliban in Doha, their work is made particularly hard because of their gender. Fawzi Koofi, an Afghan politician and member of the negotiations, has stated that as a women negotiator, she was considered as a token, a provocation from the Afghan government to the Taliban, and not a proper negotiator. This is not an isolated case: women mediators, negotiators, and peacebuilders generally struggle to make their voice heard or even being taken seriously in peace processes. More often than not, their credibility, constituencies, and qualifications are questioned or ridiculed. If women negotiators want to be included, the bar is much higher: women are expected to be leaders with technical expertise and activists with broad grassroots constituencies. On the other hand, armed actors rely exclusively on their direct involvement in violence to be included. These obstacles are part of more profound resistance to women’s participation and are supported by a lack of political will from the international community.

However, Fawzi Koofi and her other colleagues are here to preserve to rights of all Afghans and not as a provocation. Protecting women’s rights is not a question of moral impetus. Instead, it is about half the country’s population. As such, while some stakeholders have voiced their expectations of women giving up their rights to achieve a political agreement, Fawzi Koofi strongly refuted this argument, stating that women’s freedom should not be the trade-off of a potential peace settlement.  The fear is that women’s rights will fall between the lines, rolling back on 20 years of progress through the focus on military strategies.  The work of women such as Fawzi Koofi and Plawasha Hassan is even more admirable in the context of the increasing attacks against prominent women as the peace talks have floundered. In December 2020, Fawzi Koofi was shot in the arm in the context of a failed Taliban assassination attempt against her. Despite this, she keeps negotiating with the leaders of the men that tried to kill her. If it were not for women like her, the millions of Afghan women living in poverty would not be represented at all.

In the 2000s, when the U.S. and international partners intervened in Afghanistan to attack the Taliban, the protection of Afghan women’s rights was hailed as a justification for intervention. Now, the U.S. is slowly withdrawing its troops without conditioning it to women’s participation in the peace process or guaranteeing protection for women’s rights.

Given the current political instability and the ongoing violence, there is no guarantee that the Afghan government will further its commitments to human rights. The increase in violence since the beginning of the U.S. – brokered peace talks demonstrates that the situation in Afghanistan is far from being stable.  The withdrawal of U.S. troops is significantly at odds with its adoption in 2017 of the Women, Peace and Security Act. This was followed by the release of the WPS strategy in 2019, as required by the WPS Act, and accompanied by implementation plans, specifically for the Department of Defence, Department of State, USAID, and the Department of Homeland Security in June 2020. As such, the U.S. is the only country that passed legislation to implement UNSCR 1325 and is thus bound by law to push for more involvement of women in politics and matters of peace and security. It was clear that Afghanistan was going to be the test case for U.S. commitment to the WPS agenda, and in this case, as the lives and livelihoods of millions of Afghan women are on the line, failure is not an option. Thus, the U.S. cannot shy away from its responsibility to promote and support women’s participation in peacebuilding processes at all levels and work closely with women’s organizations, civil society, and international partners to prevent the creation of a security vacuum.

The withdrawal of U.S. and NATO troops will significantly impact the ongoing negotiations of the Afghan government with the Taliban and deepen the insecurities already present in the country. Since the U.S. exit is unconditional, it does not provide the needed time to create a sustainable peace process, guaranteeing a meaningful and not just symbolic women’s participation in building the country’s future. Given the current faltering of the peace talks and the daily violence and attacks against civilians, the outcome for Afghan women and girls could be the undoing of more than twenty years of progress.

Given the context above, it is clear that the absence of Afghan women in the talks is not just a failure of political correctness. It means that Afghan women have no say in their lives in the future, opening the door for a return of the days of Taliban oppression if women’s rights are not guaranteed in the future power-sharing agreement. Broadly, it is a stark reminder that peace agreements should not be about ending violence and ceasefires but instead building lasting and sustainable peace.

The best predictor of a secure and peaceful state is women’s physical security. Indeed, inter – and intrastate warfare is correlated with gender inequality: if war and oppression within the household are normalized, the culture of violence, oppression, and conflict will also be present at the national level. Thus, international bodies and other member states involved in the peace processes should not hope for sustainable peace if no attention is paid to women.

Like the U.S. and the UN, the EU and its MSs have every interest in a stable Afghanistan. As such, the EU should firmly push for the inclusion of women’s rights in the agreement and reiterate their commitments to gender equality. In addition, it is essential to support more significant participation in peace talks in the Doha negotiations.  To ensure that promises are fulfilled, the EU should support the Afghan government in implementing concrete mechanisms to strengthen and protect human rights.