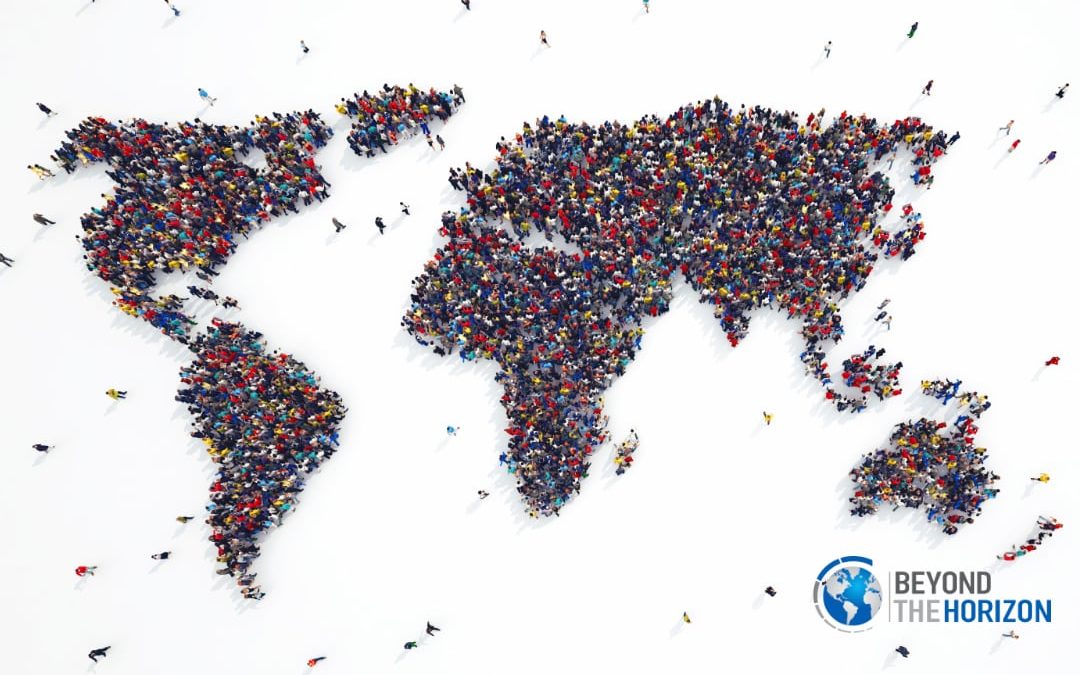 This article is an examination of the immigration policy formation issues in the literature. The immigration policies continue to fail today. This research provides a bird view on immigration policy issues by presenting the problematic assumptions and reasons for failures. The changing policies based on context, micro and macro-level trends, and the political goals of the governments demonstrate a consistent failure in policy formation and implementation. Also, this short article explores the role of the relationship between policymakers and social scientists in this process.

Policymakers and social scientists affect each other in migration-related social actions by creating laws and providing the science concerning causes of issues and overall policy implications. However, we need to look closer at this relationship since it is currently not working correctly. Cornelius and Rosenblum argued that policymakers use social science for political interests (2005). They drive and fund social sciences and create “research questions, methods, and even findings” to solve urgent problems such as the recent substantial flow of migrants to host countries (Castles, 2010, p. 1571). They are primarily interested in easy short-term answers to historically multi-dimensional issues (Castles, 2003). Also, interest groups and capital have roles in the policy process, promoting politicians’ positions (Castles, 2004; Cornelius & Rosenblum, 2005). This benefit approach especially shows itself in the labor market and the legacy problem of some immigrants. So, capitals may use irregular immigrants for the market’s interests. The policymakers enjoy having controllable immigrant labels such as good-bad illegals, wanted-unwanted, or deserving-undeserving undocumented people (Chauvin & Garces-Mascarenas, 2012; Cornelius, 2005; Holmes & Castaneda, 2016). However, sometimes playing with the labels could be difficult for policymakers because while general policies support skilled or educated immigrants, host country people could be prejudiced against their success. So, the politicians need new strategies to prevent group conflicts (Esses, Dovidio, Jackson, & Armstrong, 2001). Though there are certain controlling or limiting factors in governments’ migration policy formation process (such as international organizations), it is difficult to say if these organizations have the potential to change the interested relationship that exists in developed countries (Beckfield, 2003; Cornelius & Rosenblum, 2005). However, some social movements and non-governmental organizations can obtain benefits for their groups. Policy-driven studies tend to produce little and generally low research. Misinformed research and scholarly actions may actually cause problems, such as one-sided policy perspectives, economic or bureaucratic errors (Castles, 2004), and negative impacts on immigrants’ public opinion (Berg, 2010). The responses to migration issues such as unwanted flow mostly cause reactive approaches and a reworking of old methods instead of understanding the problem in its dynamic and specialized context (Castles, 2007). Although the immigration theorists have relinquished the simple dichotomies, the policy approach still relies on the cost-benefit dichotomy[1]. Some ‘scientific’ studies also find diversity dangerous for the harmony of receiving states (Castles, 2010). This kind of ‘science’ may have a danger to justify non-functional policies in the field.

Assumption of “Us” versus “Them,” Examples of Migration Policies, and Reasons for their Failure

In Western immigration policy literature, the primary assumption that underscores many migration policies is the protection of “us” at the expense of “them” (Adamson, Triadafilopoulos, & Zolberg, 2011; Anderson, 2017; Castles, 2003). Some studies show the importance of ‘other’ to create or develop ‘us’ (Triandafyllidou, 1998). However, definitions of “us” and “them” are unclear and socially constructed. While some groups have in the past been excluded (i.e., Asians in the US), especially in times of crisis (Freeman, 1995), they may be normalized today; the inverse may also be true (i.e., Muslims in the US after 9/11) (Bloemraad, 2006). There is no consensus about what comprises “us,” and the concept is not homogeneous. Some studies have attempted to show the importance of the other in creating or developing a notion of “us” (Triandafyllidou, 1998). State policies may be organized differently and practiced according to context, time, and immigrants population size (Soysal, 2012). Even historical immigrant-receiving countries of Europe such as Germany, France, and the United Kingdom do not understand policy practices in the same way[2] (Koopmans, 2013). Some regional/territorial implementations of migration policies may differ from countries’ rules and against civil rights (Gilbert, 2009; Varsanyi, 2011). The role of the Chicago School in the 1920s was substantial in terms of sociological immigration policies. Because sociological studies have been affected by the functionalist approach and inter-group relations of the Chicago School, assimilation theory is also influenced (Castles, 2003). In this approach, strangers are dangerous and do not belong. They should be assimilated.

However, the dichotomic classification of “us” and “others” is a limited approach. These categories are far more diverse than they appear. They are evaluated differently in cities and countries (Ariely, 2012), and the definitions change in the context of historical migration and colonized countries and new immigrants to receiving countries of the same continent, such as Europe (Bail, 2008). Moreover, there is the question of when “others” or “strangers” begin to matter to a receiving country. The size and capital of the immigration flow can widely change the perception. The most important question is: Do “they” have the potential to change “us’? When we look at the populations of immigrants in receiving countries, this begins to make sense. For example, Islam has a prominent place in European migration policy discussions, while the Spanish language is a concern in the US (Zolberg & Woon, 1999). Immigrants’ social capital also matters to receiving countries’ politics (Andreouli & Howarth, 2013). While highly educated and skilled migrants tend to be welcome in developed countries, non-elite immigrants and asylum seekers are seen as a problem and potential burden, mostly by right-wing politicians. 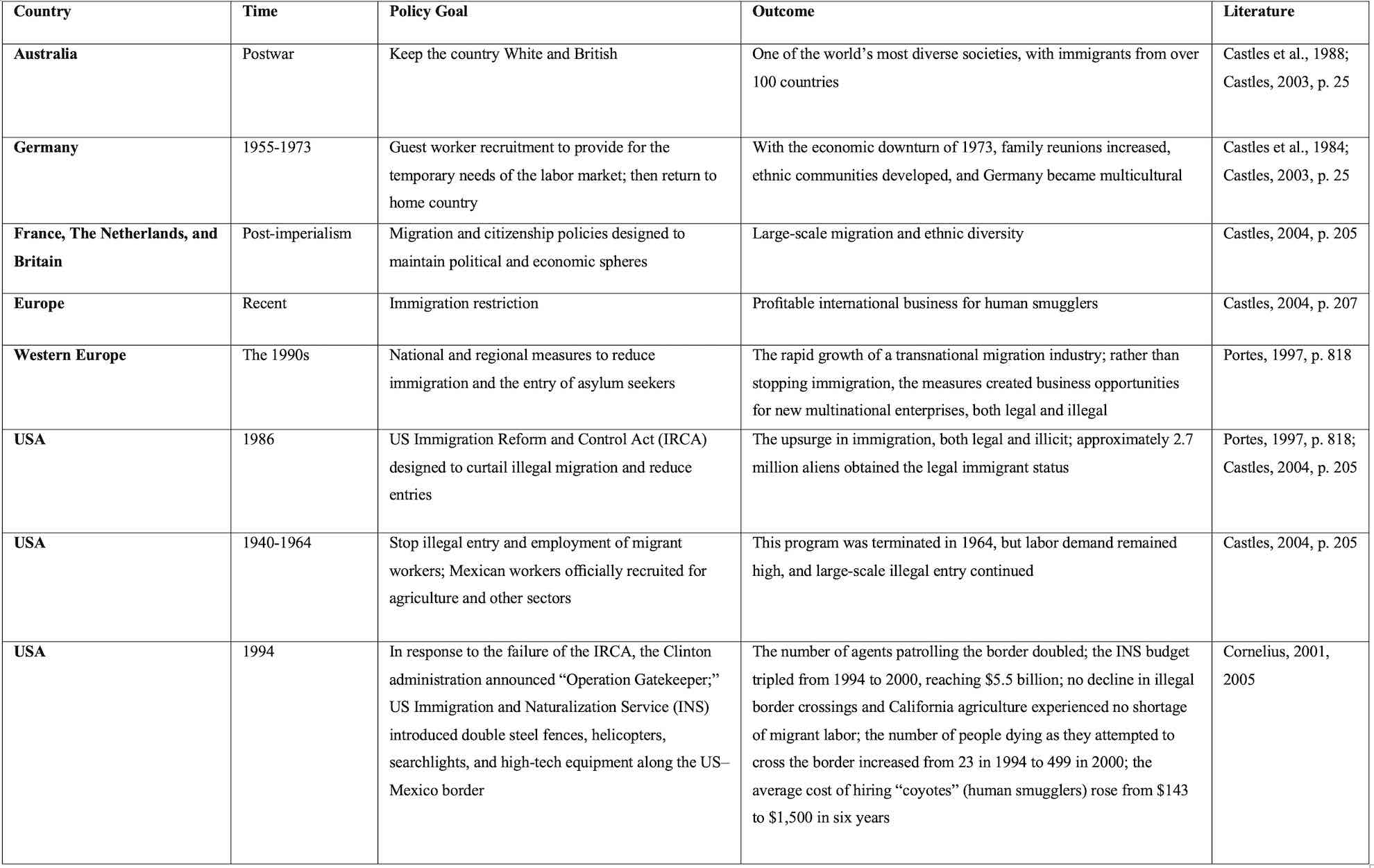 So, why do migration policies regularly fail? In addition to problematic, short term, interest-oriented relationships between policymakers and social scientists, there are additional explanations outlined in the literature. Portes described policy failures as the unwanted outcomes of social practice (1997). According to Anderson, “migration policies fail because they are about migration” (2017, p. 1528). Policymakers believe that migration can be stopped through legal means, so they often ignore migration’s social dynamics and their links to broader social topics such as social transformation and inequality (Castles, 2003). Also, they tend to take economic considerations into account while creating migration policies. Even Australia and Canada, which are historically human capital oriented countries, follow this trend by changing their selection policies following the job market needs (Akbari & MacDonald, 2014). Although host countries tend to be powerful, their short-term policies do not consider the inherent characteristics of migration and the entire process from the determination to move from the homeland to post-migration generations’ experiences. Therefore, likely failures can sometimes be invisible in the short term (Castles, 2004).

Policymakers and scholars concerned with migration often see it as abnormal and inherently problematic and seek strategies to reduce movements. By contrast, my starting point is the assumption that human mobility is a normal part of social life. At times of rapid change, such as the current epoch of accelerated globalization, international migration tends to grow in volume and to become increasingly important as a factor helping to reshape societies. Therefore, migration should be seen not just as a result of change nor a cause of change but as an integral part of social transformation processes.

[1] Webber claims that the European Union countries breach human rights for the sake of their interests in stopping migration flows by using undemocratic countries with sticks and bones (2017).

[2] For example, while German Chancellor Merkel describes Multiculturalism as “Multikulti.” She refers to the “attitude of celebrating diversity”, French President Sarkozy refers to “something alien” to his country, and British Prime Minister Cameron sees the term as “state multiculturalism” (Koopmans, 2013, p. 147).