State-of-the-Art in High-Tech and Way Forward 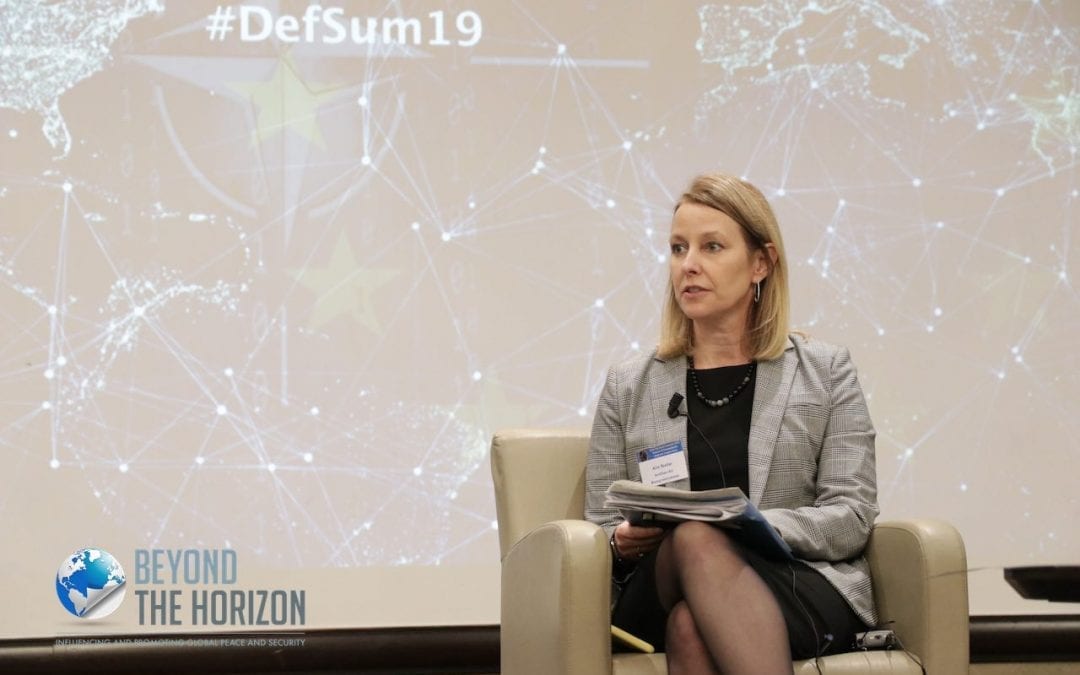 Thank you for inviting. I’m here on behalf of AmCham EU and I think this is really a wonderful forum with a lot of diversity of thought and analysts. It’s been a very robust conversation and I’m happy to support industry’s perspective. I don’t want to repeat what has already said but just to amplify some of the challenges that we’re facing. The security environment that NATO is looking at is really in and around now, it’s going from physical to virtual. There is a lot of hybrid and asymmetrical threats that NATO is trying to face. We have balance of power that’s shifting and distributing itself differently. NATO’s looking at increased stability up in the high North and access denial. It’s looking at increased instability in the South and try to figure out how to address those issues and looking at the traditional NATO models of defence and deterrence when you throw non-state actors in there. They don’t respond in the same way to defence and deterrence. So, by the same token they’re taking a look and industry is taking a look at the pace of technological change, and I think it is really outlined nicely all the different ways that the commercial industry is out there, changing technology making it go faster.

And when you’re looking at addressing this myriad of changing security environments and threats, you need to find a way to capture that and I would say that the traditional defence industry is doing the same thing. Boeing has been around 100 years and you have to find a way to disrupt ourselves, we have to figure out what roles are we going to play in things like cyber, AI, data analytics, space. So there is this digital revolution and large industrial organizations, like Boeing and others in the defence industry, really have to figure out how to address those disruptive technologies and as a provider of platforms historically. So, whether it’s the Joint Strike Fighter with Lockheed Martin or the F-18 or the regular helicopter, moving away from that platform centric way of thinking into a systems of systems way of thinking and everything that comes along with that. Looking to new partners in developing those capabilities, we had Amazon AWS positioning for sovereign defence Cloud business with DoD (Department of Defence). So that’s an emerging actor, that’s not in our traditional portfolio of defence partners and competitors. We have SpaceX and Blue Origin that are challenging legacy of companies in space. So, it’s a very dynamic environment.

How do we respond to that? How do you take NATO (70 years old) and companies like Boeing and others that are 50-100 years old and be able to adapt? And the other long legacy of being able when you bring the transatlantic partnership when it works. I think we have the history of showing a lot of success and development and innovation of really touched on a lot of those in the panel earlier, but, you have NATO AWACS that has partnership across 11 European nations, then NATO ACCS, the command and control system with Thales and Raytheon for mission-critical command and control, you have JSF (F-35), 25% content coming from Europe, Lockheed Martin works with Leonardo at their facility that uses F- 35 palettes and Collins collaborating on next generation software-defined radios. We’re very proud of our T-7A (new advanced pilot training system) where we partnered up with SAAB in order to design, develop and market in a very rapid way. So, if you double down on that transatlantic partnership that technology and innovation is there and when you think about it collectively, we have the most advanced industrial base still in the world and there is lots of opportunity if we continue to work in a transatlantic way to leverage that and to tackle things like AI and cyber and space. But you have to look outside that traditional portfolio, right? So, how do you do that? My view is that you have to leverage that commercial mindset and that hungriness that start-ups and that are out there and they’re trying their prototyping fast or failing fast. One way that we’ve approached it is to disrupt ourselves internally, so we created a new business unit called Horizon X which is almost like our venture capital arm. So, for these companies that are struggling with how to, you know, they have this technology, but they really don’t know how to work within the defence system. We don’t have to acquire them, we don’t have to compete with them, we don’t have to develop these technologies ourselves and figure out how to move as fast as a 10-person company. What we can do is to invest. We can teach, we can learn from them and make that more of a symbiotic relationship between these emerging companies and the larger companies that are very steeped in defence procurement and how NATO and other governments work. So, I think there’s a lot of opportunity there to take a commercial approach. The other thing that we have to think about is just the speed of acquisition and that’s something that NATO has talked about for years; agile acquisition, agile contracting. And acquisition and contracting regulatory, it’s not the most interesting thing in the world to talk about but it’s really important to be able to respond effectively to these emerging threats. So, we believe that industry engagement in that is a really critical piece and to really have agile acquisition, you have to have industry at the table perhaps earlier than it’s been before. So, getting industry in a very early stage of NATO defence planning, then the planning process can lead to more affordable solutions. So instead of coming up with a capability and having it go out and design and develop, there could be commercial off-the-shelf stuff out there that can close those capability gaps. There’s also looking at the process as a way to be more iterative. So instead of huddling down, coming up with what take a back capability gap you want to fill using more of a spiralling or iterative process? So, you’re out collecting information with industry refining your requirements getting the best-in-class, refining your requirements and making it more of a circular spiral process.

There’s a good example where they created industry forums to collect industrial input early. A good example of just some unsolicited advice was IBM who started an industry initiative for agile acquisition through and I had so really coming up with ideas that aren’t necessarily companies specifically helping the industry as a whole. In addition to just procurement and accelerating decision-making cooperation to allow continuous adaptation of state-of-the-art. So, there are a lot of ways that we can break outside the traditional NATO acquisition model. So, it doesn’t necessarily have to be member states going out and financing platforms. There’s a service model that you can go out, so that you can overcome that capital investment and acquisition cost. I would posit that doing more cooperative pooling and sharing among the NATO Allies would be a very effective way. We had some limited success there through AWACS and C-17 and we’re seeing some more interest in that but there are some natural sound barriers. We can figure out a way to break down those barriers. I think we could accelerate decision-making and we could make those capabilities more affordable and more likely to be up taken by member states. So, you know, there are a lot of tools out there. It’s just a question of focusing on them and getting there early enough and getting expanding our pool and players that were we want everyone to include in the conversation.

Last, but not least, PESCO and EDF. All of these are emerging processes and EDF hasn’t finished yet. So, from US industry’s perspective, and I know that there are two sides to this coin, but making sure that, if we’re going to be bringing back on intellectual property into these conversations that we feel like we have an adequate way to ensure that. I think there are plenty of avenues to do that and to do that cooperation. We just have to work through the details of what that’s going to look like.

When EDF started there was much more barriers for third state participation. We have made some progress there. There are still issues clearly that we have to work through, you know, intellectual property is one of those, but we are looking headway, there’s a lot of discussions going on both sides of the issue. I think we’ll get there eventually but we have to make sure that there’s a level playing field for all of the participants involved and you really want to bring the best of innovation and if you have companies that can bring the state-of-the-art to this process for the Europeans, but they either feel excluded because as really describe it, you know, they felt like if you have somebody as of your team, you’re not going to have access for funding or your company that is worried that your background intellectual property is not going to be detected in the way that you expected to stay or not. You’re not getting the best, you’re not getting world-class, you’re not having me. If you’re not seeing the innovation that you that I think the Europeans want to see as part of that process.