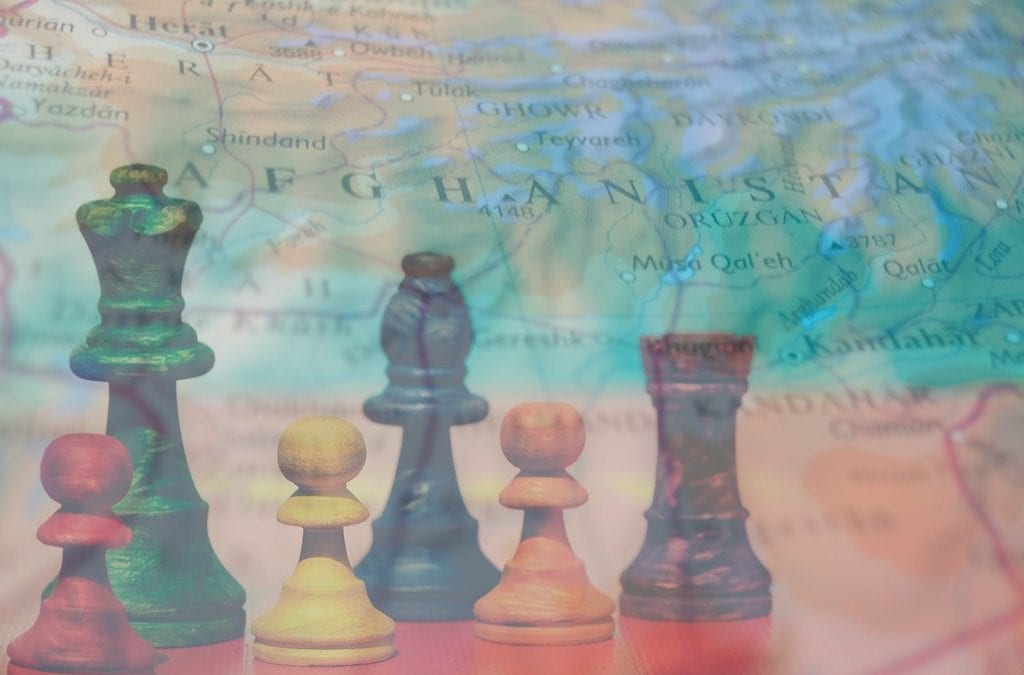 The rivalry between British and Russian Empires over the control of Afghanistan named as “the Great Game”. Some 190 years after, Afghan soil witnesses a similar “game” being played by global and regional actors.

This landlocked country, lying at the centre of the rising powers of Asia, is notoriously called the graveyard of the great powers. Three invading attempts – twice by the British Empire and once by Soviet Russia – failed. Fourth attempt, the longest war in the U.S. history, is about to end without any tangible outcome for the U.S., after having spent more than $ 1.07 trillion in the last 17 years.

President Ashraf Ghani initiated the Kabul Process as early as 2017 in the quest for an Afghan-led, Afghan-owned peace which is then supported by the wider International Community. The Taliban responded positively with a three-day-cease-fire during 2018 Eid, days after a unilateral ceasefire was ordered by the government, something never happened since 2001. Reconciliation efforts gained impetus after U.S. Secretary of State Mike Pompeo appointed former U.S. Ambassador to Afghanistan Zalmay Khalilzad to be his special adviser on Afghanistan in September 2018. Meanwhile, Trump administration revealed its intention to withdraw 7,000 troops from Afghanistan, which caused Secretary of Defense Jim Mattis to resign. Khalilzad conducted intense shuttle diplomacy to bring all sides of the conflict together around the negotiation table. There have been six rounds of direct talks between the U.S. and the Taliban so far, failing to get together representatives of National Unity Government and the Taliban but made “some progress”. Negotiations continue over U.S. withdrawal timeline and security guarantees that the Taliban is asked for ensuring the U.S. that Afghanistan would never again be a safe haven for terrorists.  However, Taliban still rejects to negotiate with National Unity Government which they see a bunch of Western puppets.

There is a widespread consensus among American society on disengaging from Afghanistan. Politicians are having difficulty in convincing both the U.S. public and its partners to the necessity of the war. The military campaign reached its climax and it seems that exerting more power will not tip the balance in U.S. favour.

In this context, Russia, partly afraid of a power vacuum in Afghanistan after U.S. withdrawal and partly extending great power competition – Russia perceives Afghanistan as one of the fronts in great power competition – to the Afghan soil, initiated a parallel peace process by getting the Taliban and the various factions of the Afghan opposition on board. Russia gives valuable political credit to the Taliban, and the Afghan opposition while consolidating its situation in peace talks as the holder of balance. Russia’s Moscow Process proved successful in terms of bringing all relevant sides together.

Russia and the countries in its “sphere of influence” in Central/South Asia are increasingly voicing their concerns regarding terrorist groups operating in their neighbourhood. Cognisant of the problems that they may face after U.S./NATO withdrawal from Afghanistan, they might have started or would rather start contingency planning with an emphasis on counterterrorism for the security of their region. In this regard, CSTO might have a role to play in the near future.

National Unity Government, the coalition that currently governing the country, was formed in 2014 only after U.S.-led intense international mediation took place between two front runners of the Presidential Election. In line with the political process, Coalition Forces handed over security responsibility of the country to the Afghan National Defence and Security Forces (ANDSF). By the end of 2014, NATO ended ISAF and diminished its footprint from more than 130,000 to nearly 15,000 troops only providing training, advice and assistance within the remits of non-combat Resolute Support Mission. Despite tremendous US/NATO Train, Advice and Assist (TAA) efforts and enablers provided, ANDSF failed to counter and contain Taliban insurgency, let alone defeat it. The attrition rate is unbearable. According to the latest figures, the attrition rate is 2.2 per cent per month (which means roughly quartile of the ANDSF is changed every year). Government “control” and “influence” over the Districts had dropped by more than 18% since November 2015.

Low turnout rates in the elections, endless complaints, closed polling centres due to the fragile security situation in some regions threaten elected politicians’ legitimacy. Parliamentary elections which were supposed to be conducted in 2014 have only been recently finalised, with major fraud claims. Although his national unity government is being seen as the primary interlocutor by the wider international community, countries such as Russia are investing in other political figures, again exploiting the political fragmentation of the country.

Lack of functioning government services, widespread illiteracy, political and ethnic tension lines triggering lack of common national identity and consciousness, endemic corruption are the symptoms of a failing state and make Afghanistan a source of instability in the centre of Asia.

Even though the Afghans could find a way towards peace any time soon, their biggest enemies, poverty and illiteracy that creates fertile ground for terrorism and corruption will likely to remain.

On the contrary, Taliban increased its effectiveness and control over the Afghan population and territory after ISAF. The insurgent group granted de facto recognition from the International Community by simply attending to peace talks. Taliban seems to be the winner of this attrition war. However, the bitter pill for Taliban to swallow in order to win the peace is to deny other Jihadi groups’ (such as AQ and ISIS) activities in Afghanistan so that Afghan soil would never again be a safe haven for terrorists. Taliban ruthlessly continues to kill its own people to leverage to have the upper hand in the negotiations. By doing so it tells to the Afghan society that their lives do not matter much when there is a political gain at stake.

A sudden withdrawal might jeopardize American interests and exacerbate the situation for Afghan national unity government. A condition-based, phased approach taking into account developments in the battlefield might better fit for purpose. Apart from that, the U.S. needs to turn its focus towards more imminent threats such as China in the Pacific and Russia in Eastern Europe, the Eastern Mediterranean and Syria.

Regionally, U.S. and Russia share the same concerns. However, globally, they play the game of great power competition, which produces suboptimal solutions for the country. Taking into account current trends in the country, it goes without saying that the National Unity Government’s failure may lead the fracturing of the state. More thrilling, a Taliban victory, political or military, might take the country back to pre-9/11 days.

Last but not least, after unilateral U.S. withdrawal, Afghanistan might feel a sense of abandonment which may push them towards Russia and China. Economically, Afghanistan will be dependent upon foreign aid for a foreseeable future. Such a withdrawal might have catastrophic effects on an already fragile Afghan economy.

*Samet Coban is analysts at Beyond the Horizon Int’l Strategic Studies Group.