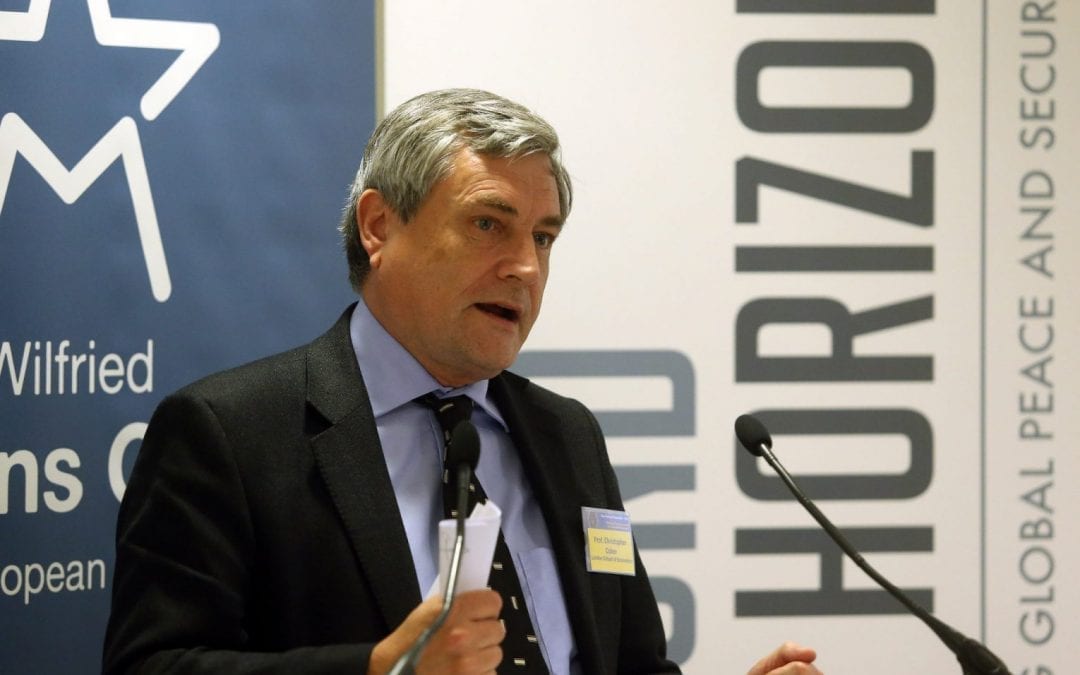 We can probably take as a point of departure that the world is disordered. And, the question is that is the disorder in the 1930s capable of addressing the disorders of the present day? The answer is probably no.

If we go back to the 1930s, it is very easy to say that the historical analogy is there;

– First, we have an economic vacuum. The Bretton Woods organisations that used to run the international economy are no longer than monopoly organisations. We have countries that even more indebted now than they were in 2008. And then, we have the trade tariffs. The United States backed to what they were in 1950. But there are differences. We are much more interdependent than we were in the 1930s in terms of greater direct investment. The trade flows are greater than they were in the 1930s. Central Banks now hold each other’s debts. We have now shaken up a trade war between the United States and China. We have 267 trillion dollars of debt. We have never been as indebted as we are now. And, if we would have repeated the 2008 process, we wouldn’t have the same success, because we spent the money to a very large extent.

– Second, we have an ideological vacuum. The old order that we lived for was a liberal order. China and Russia totally reject the liberal package. They no longer call themselves ‘nation states’. This was an order that meant to be based on the nation states. They call themselves ‘civilisation states’. Civilisation states have certain authorities that extend beyond those of nation states. Civilisation states do not allow the western ideas to penetrate. Patriarch of Moscow says that human-rights are an invention of the West, an invention of Jews and the Protestants, to be absolutely precise. These countries accept that there has to be a degree of civil society interest, but the interest is very very narrowly circumscribed. Their own NGOs are different from our NGOs. Donald Tusk quite nicely called the West as ‘political civilisation’. Our civilisation is under challenge in Eastern Europe.

– Third, we have a strategic vacuum. The U.S. administration doesn’t seem to like the world order that it puts together. Nuclear Treaty with Russia blown to arms control. We have another strategic vacuum in the exercises in the Russian Far East. NATO and the Shanghai Cooperation Organisation are possibly going to redefine the strategic map. We have a strategic vacuum in the Middle East. We have new strategic alignments and realignments that are creating strategic vacuum there. And, finally, we have failure of the U.N. which is very similar in many respects with the failure of the League of Nations in the 1930s. This is an organisation that has been absent from most of the important conflicts. It is absent in Syria because of the Security Council deadlock. 700,000 people are dying in Syria, and the U.N. is absent from that conflict. 400,000 people died in South Sudan despite the U.N. efforts. 7 million people died in Congo in the last 10 years; again the U.N. has been very largely absent from that conflict. This is an organisation that have difficulties finding a new Secretary General sometimes. So, wherever you look, you can see disarray, disorder.

Are Russia and China revisionist powers? Or are they powers that are seeking to renegotiate the international order to bring it in line with the realities of this century on the understanding that probably its historical time may be over. We have three scenarios if they are revisionist powers;

– Russia will continue to break the international law and get away with it to a large extent, and sanctions will not stop it. – China will ban the rules rather than break the rules, as it has quite successfully in the South China Sea.

– ISIS was an organization that wanted to throw away the rule book. ISIS is no longer an immediate interest to us, but there will be a successor.

There are some other alternatives which we must at least consider very briefly.
– One was G2 world (US-China) that Zbigniew Brzezinski was very keen on. This is probably gone.

– The other possibility is two parallel systems; an American-led system and a Chinese-led system. I think the great Belt and Road Initiative which now involves 70 countries is in itself very indicative.

– The third is G0 world as lan Bremmer calls. That’s the world in which there is no hegemonic power. There is a global governance gap.

The world order is only as strong as the willingness of the Great Powers to actually keep it going on the road. Great Powers are the great responsibles. Their responsibility is to keep the order going.

* Christopher Coker is professor of International Relations at the London School of Economics and Political Science. His publications include Men at War: what fiction has to tell us about conflict from the Iliad to Catch 22 (Hurst 2014); The Improbable War: China, the US and the logic of Great Power War (Hurst 2015); Future War (Polity 2016); His most recent book is Rebooting Clausewitz, ‘On War’ in the Twenty-First Century (2017). He is a former twice serving member of the Council of the Royal United Services Institute, a former NATO Fellow and a regular lecturer at Defence Colleges in the UK, US. Rome, Singapore, and Tokyo.