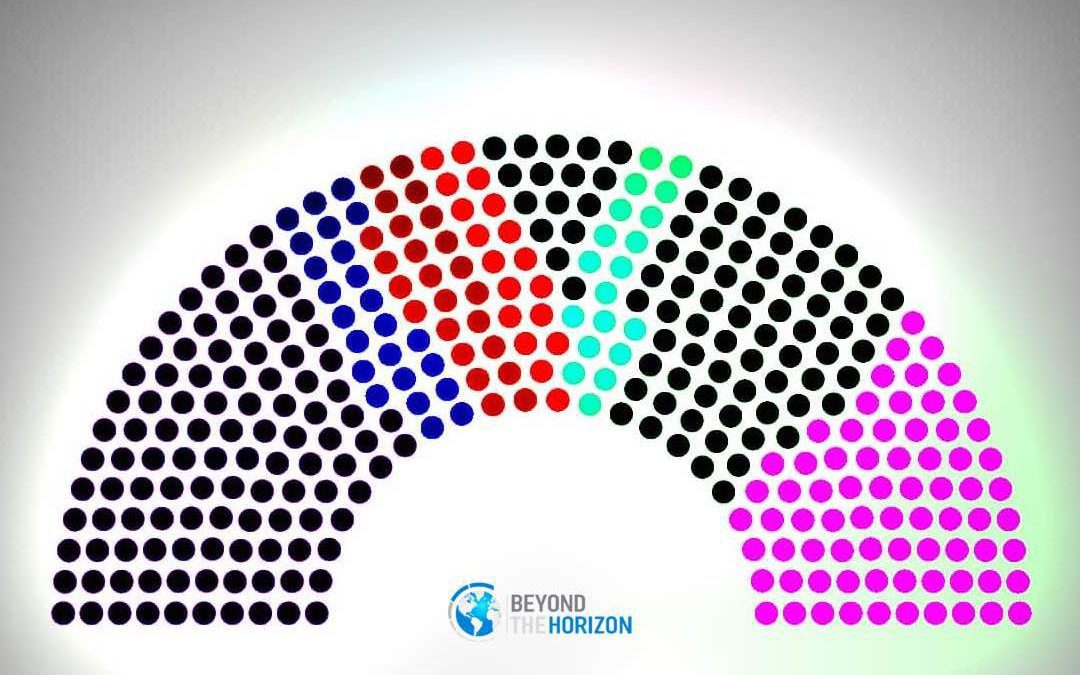 After a tense wait following the Swedish election on Sunday, September 11, the result came on Wednesday. After eight years of government by the Social Democrats with the support of the center-left bloc, there will be a shift in power as the right coalition bloc won with a slim majority of 176 mandates to 173. However, the biggest winner in the election was the far-right Swedish Democrats, who became the second largest party in Sweden with 20,5% of the votes. One thing is for sure, a new political era awaits Sweden, and it will be challenging to navigate in these turbulent waters. 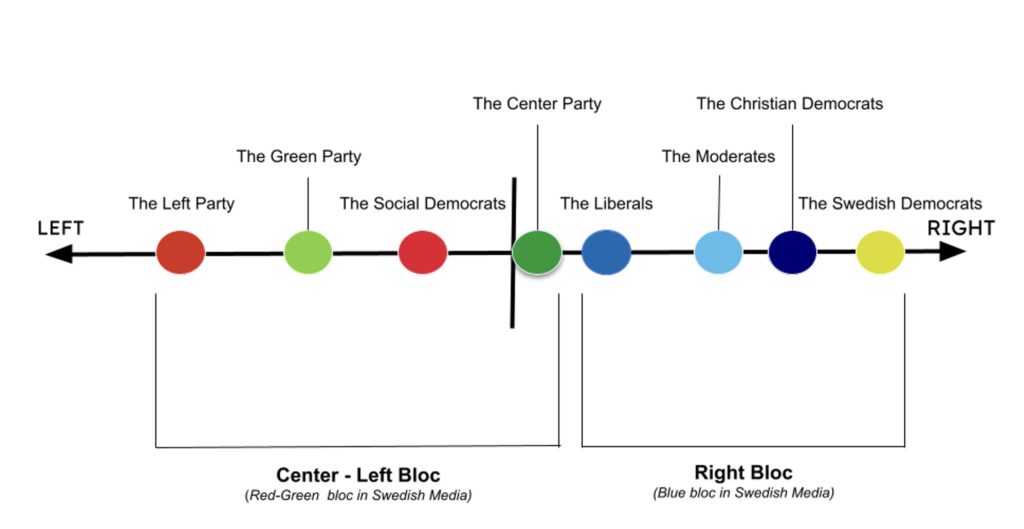 Figure 1: An overview of the position of the eight parties in the Swedish Riksdag on a political left to right scale. Also visible are the two blocs that compete to gain most of the seats. Neither of the two blocs seems to be rather united. The leading parties who would get the Prime Minister position after an election win are the Social Democrats to the left and the Moderates to the right. 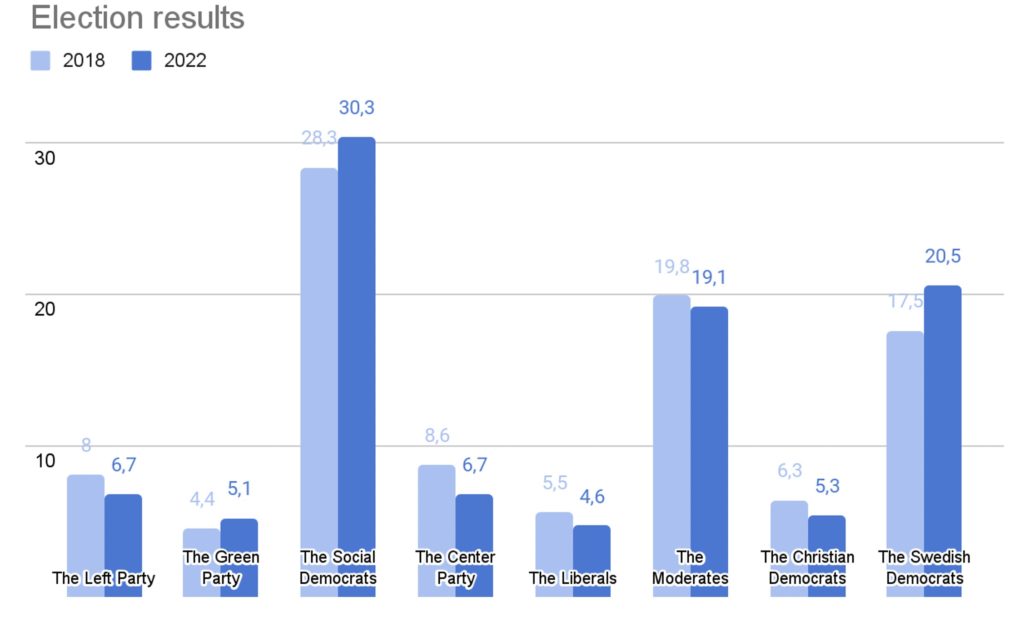 Figure 2: A comparison of the election results from 2018 and 2022 for the eight parties in the Swedish Riksdag. The party growing the most is the Swedish Democrats (+3,0). While the Social Democrats did grow since the last election, it was not enough for the center-left bloc to win the majority. Of all the smaller parties, only the Green Party gained voters since the last election.

The Swedish Democrats – why have they been controversial?

The Swedish Democrats was founded in 1988. The party that advocates extreme right politics has undergone several transformations especially during the 2000s. Led by Jimmie Åkesson, the Swedish Democrats first entered the Swedish parliament (the Riksdag) 2010 election, winning 5,7% of the elector votes. Since then, it has increased its vote rates steadily. After twelve years, the party is now the second largest, with 20,5%. The Swedish Democrats have an anti-migration stance, which has been a core political line since its establishment. This has put the party at odds with other political parties, leaving only a few parties willing to negotiate any issue with them in 2010 when they first entered the Riksdag. A showcase example is how the Center Party has stayed committed to not cooperating with the Swedish Democrats, forcing them to change bloc after the other center-right parties gradually normalized their relations with the far-right party in recent years.

The Swedish Democrats have functioned as polarizers in the Swedish political landscape and have been very much involved in the issues under discussion recently. For the 2022 election, migration and law and order became recurring topics in political debates and proved to be among the key issues for the Swedish public.

Some remarks from the 2022 debates

Organized crime and deadly violence were among the most debated topics leading to the 2022 election. Looking at statistics, Sweden has an exceptional problem. In less than a decade, Sweden has become the top country of fatal shootings per capita in Europe. In no other western country in Europe has the number of deadly shootings increased. By August this year, 47 people were killed due to gun violence, which was more than all fatal shootings in 2021. This shows the trend continues. This alarming issue has created harsher rhetoric in debates. The four right bloc parties have all emphasized the deportation of foreign criminals, expansion of secret surveillance and stronger punishments to break organized gangs. Surprisingly, the Social Democrats seem to agree with the right bloc that stronger punishments are needed. However, the former highlight the importance of fighting racism and polarization within society as an integral part of the strategy to beat the growing criminality. A majority of Swedish parties agree that the legal system needs to be strengthened and punishments need to be stronger.

In the last decade, Sweden has experienced steadily growing immigration. Today, more than 2 million people in Sweden were born in another country, comprising 20% of the Swedish population, with Syria and Iraq as the top two origin countries. The migrant crisis that struck Europe in 2015 became the decisive factor for a change in Swedish migration policy. The right bloc blames a failed integration on mass immigration without control that occurred during the Social Democratic government. Learning the language or getting a job is no longer the main focus of the debate, but internalizing Swedish (Western) values and culture are also two recurrent themes.

Swedish tolerance and openness are no longer a general theme in Swedish politics when discussing migration. In response to the wide criticism, the Social Democrats have also changed their tone when talking about migration and integration. In July 2022, the Minister of Integration Anders Ygeman (Social Democrat) announced he wanted to see a cap on non-nordic citizens in Swedish societies to prevent segregation in vulnerable areas. This was a controversial argument inspired by a practice in Denmark where “anti-ghetto” laws with the same aim received major criticism this year. Swedish politics has changed significantly during the last decade by hardening the rhetoric on integration and migration.

NATO and the energy crisis

The crisis in Ukraine has also had an impact on the Swedish elections. There is now a historical unity to join NATO, which will be continued regardless of who governs Sweden. Party leader Ulf Kristersson (Moderates) says this is the one issue both blocs have agreed upon. The most discussed consequence of the Russian war on Ukraine in Swedish politics is the energy crisis that most of Europe is experiencing right now. In Sweden, the debate has focused on whether expanding nuclear power capacity or not, with the right bloc representing the pro-nuclear side. Yet, there are tendencies of the Social Democrats to open up to the possibility of expanding nuclear powers, which they have opposed earlier, arguing that Sweden is in an extraordinary situation right now. Nuclear power has been the main focus of all the climate debates leading to the 2022 election, which has gained some criticism for being too narrow. The right bloc’s commitment to fighting climate change may become secondary to providing cheaper energy and counteracting growing inflation. Only time will tell if this will have an effect in the long run on the Swedish climate impact.

A shift in power, but it will be challenging

Ulf Kristersson (Moderate) is expected to be selected as the new Prime Minister, with support from the right bloc consisting of the Swedish Democrats, the Moderates, the Christian Democrats and the Liberals. However, who he may choose as Ministers in his Regering[*] remains unanswered. Already on September 12th, party leaders from the three parties in the right bloc were seen to individually engage in talks with Ulf Kristersson and the Moderates. Still, no information has been confirmed on potential Ministers. The Moderates are said to only want the Christian Democrats in their Regering, but this will require complex negotiations with both the Swedish Democrats and the Liberals.

The election in 2022 confirms a change in Swedish politics. Sweden is now a very polarized country with a difficult situation for any Regering to lead. Even if Ulf Kristersson and the right-bloc have now won the election, the slim majority will be vulnerable to internal disagreements, which are already visible. With the rise of the far-right Swedish Democrats the political landscape has drastically changed, with shifting loyalties and harsher rhetoric in policies across several debates. Sweden is facing new and alarming issues concerning criminality and integration, which has put the Swedish Democrats at the center of attention since the party has had these issues as its main focus since its establishment. As the issues have gained more focus, the politics has become more extreme, affecting both the right-bloc and the Social Democrats, who have presented controversial policy changes. The Swedish Democrats have experienced some support for their anti-migration policies, especially in cooperation with the other right-orientated parties, such as the Moderates and the Christian Democrats. Even with its controversial background, 20,5% of the Swedish population put their trust in a far-right party, forcing Swedes to question their historical self-image as tolerant and open. Sweden is indeed entering a new political era filled with uncertainty.

Betty Wehtje is a research intern at Beyond the Horizon ISSG. She currently pursues a master’s degree in Peace and Conflict Studies at Lund University.