In September 2015, the Poseidon program became public for the first time, when the Russian state television “accidentally” showed a picture of Poseidon, nuclear-powered submarine drone, also known as unmanned underwater vehicle (UUV) or autonomous underwater vehicle (AUV). Whereas all nuclear weapons can kill thousands of people, and may leave radiation poisoning the environment for many years, Russia’s new apocalypse tornado, known as “Poseidon”, is designed to maximize this effect. 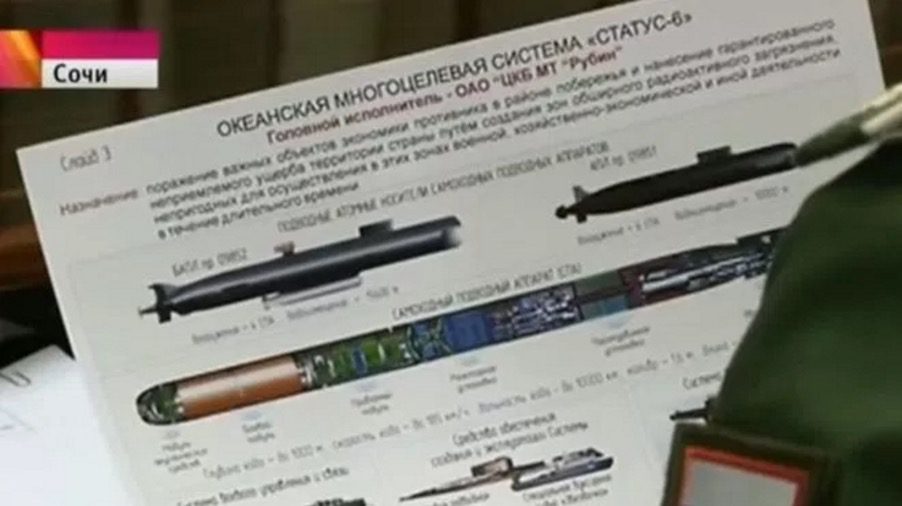 A slide seized on Russian state television is reportedly about Poseidon. BBC

On 1st March 2018, President Vladimir Putin publicly announced, for the first time, not only its new nuclear weapons but also six NextGen missiles in his State of the Nation address. One of the NextGen missiles is “Poseidon”, which is originally called “Status-6 Oceanic Multipurpose System”, by the Russians and Kanyon by NATO. It was named by President Putin in 2018 following a “naming contest” for Russia’s new weapons. He outlined the Russian efforts to develop an UUV which can deliver conventional and nuclear warheads and is able to destroy infrastructures, carrier groups and other enemy targets.

There are two Russian new advanced strategic weapon delivery systems: Poseidon and Burevestnik. These two weapons differ in their design characteristics and their specific military function. Yet they are combined to provide long-range nuclear weapon delivery systems by means not used by other nations, and the common technical feature is that they both rely on the use of a compact nuclear power source.

In February 2019, the former head of the U.S. Strategic Command General John Hyten raised concerns that Russia’s new nuclear delivery vehicles – the submarine UUV Poseidon, the nuclear-powered missile Burevestnik – would not be covered by the New START. He pointed out that these systems ultimately could pose a threat to the U.S. and that he believed the U.S. and Russia should extend the treaty in order to include them under the New START.

Status-6 “Poseidon” torpedo is “robotic mini-submarine” with a diameter of 1,6 meter, and is an essentially underwater Intercontinental Ballistic Missile (ICBM). In 2015, Russian media sources gave detailed design specifications for Poseidon capable of travelling a distance of 10,000 km, reaching a speed of 100 knots (approximately 115 mph), and a maximum depth of 1000 m (3300 ft). The torpedo itself would be 1.6 m in diameter and 24 m long. It is about twice the size of a ballistic missile launched from a submarine and about 30 times the size of an ordinary torpedo. In 2018, they also started to report speeds of 60-70 knots (70 mph to 80 mph) for Poseidon, and a 2-Mt warhead, 165 fewer capabilities than originally announced, which is probably due to the maturing of the design. However, it is not clear whether Russia is capable of building a reliable miniaturized nuclear reactor for UUV.

As Poseidon is expected to operate at depths of 1,000 m, it`s interception is extremely difficult with the current technology. Moreover, it seems that this UUV can operate under the Arctic ice pack, so it is much harder to detect and engage.

Poseidon is the largest torpedo ever developed, with a size thirty times that of a heavy torpedo. Actually, the torpedo is so large that it can only be carried by a specially designed submarine. It can travel thousands of kilometers by using a tiny nuclear reactor to power a pump-jet propulsion system. Poseidon drone can allegedly be fitted with a thermonuclear warhead delivering around two megatons. The thermonuclear warhead of Poseidon is designed to destroy coastal sites such as ports, cities, and economic infrastructure.

Poseidon has been tested 11 times so far; the last known test was conducted in November 2018 according to in the US intelligence assessment. The delivery of the weapon is expected in 2027 and will be transported by specially modified Oscar submarines. The first of these special submarines – the 09852 K-329 Belgorod project – was launched in April 2019. Belgorod will be the first carrier of Poseidon nuclear-powered submarine drones, which will participate in sea trials in June 2020, and the act of acceptance is planned to be signed in September 2020. The Belgorod will become the largest submarine in Russia and would be able to transport up to six Poseidon torpedoes. It is highly likely that the Poseidon will complete its tests by 2025 and enter operational service in 2027. When it is in service, Russia will have a new delivery system for nuclear weapons. It is obvious that Russia has dedicated considerable resources to the nuclear programme.

It is not clear whether the Poseidon will serve solely as a delivery platform for nuclear warheads or may also be deployed for intelligence, surveillance and reconnaissance (ISR) missions. But, it is highly likely that Poseidon’s main goal would be to target and keep coastal cities at risk, where Avangard hypersonic missiles would hit the US hinterlands, particularly ICBM sites of the U.S. 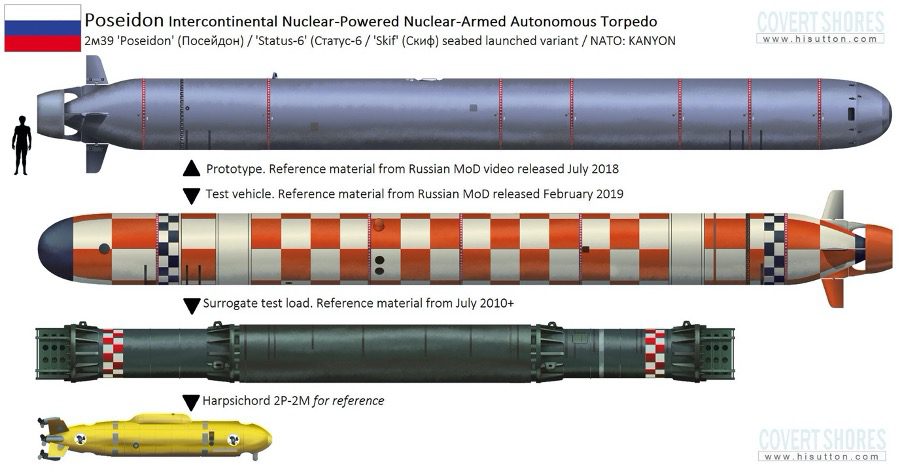 On the other hand, in order to counter Poseidon, the U.S. is developing its own UUV which is named Orca, the Extra-Large UUV (XLUVV) is based on Boeing’s Echo Voyager drone. The U.S. awarded a contract to Boeing to build it four XLUVV. It is scheduled to cruise the oceans of the world with its own Artificial Intelligence (AI) and technically could last as long as six months. It has a top speed of around 8 miles per hour underwater. The 15.5-meter long and 2.5m wide Echo Voyager has a range of nearly 7,500 miles, and it can dive to depths up to 3,000 meters deep. It has a diesel-electric propulsion system. Its batteries give it a range of more than 150 miles at a sustainable cruising speed of around 3 miles per hour.

The development of UUV has been expedited as part of a number of on-going Russian efforts to circumvent US ballistic missile defence systems, in particular the Aegis Ashore systems located in Poland and Romania.

The emergence of a new economic crisis with the global COVID-19 pandemic could pose new questions about NATO’s ability to sustain military spending and maintain nuclear deterrence. But if the U.S. fully engages in the Pacific, it may not react with the full force necessary for a future European conflict scenario. In such circumstance, NATO allies would be operating with a serious shortage of key enablers.

Compact nuclear reactors are one of the few military technologies in which Russia is the unquestioned world leader, and Poseidon is promising to transform more than twenty years of research into a new weapon that could change the game, having applications far beyond nuclear deterrence.