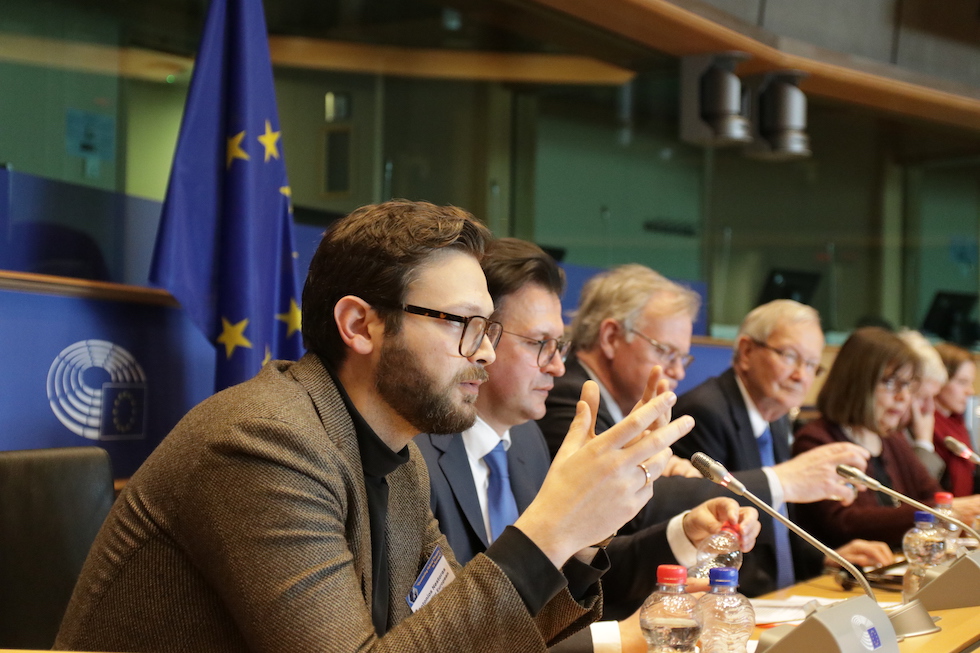 There are many labels to describe the issues linked with the return of great power competition in the cyber era in search for conceptual clarity. I am going to talk briefly about two of them – political warfare and hybrid warfare. The definition of hybrid warfare is the combination of unconventional types of warfare with more traditional, military operations. The problem with this definition is that it is very narrow in the sense that the actual fighting rarely happens. What we have instead is prolonged unconventional conflicts, characterized by propaganda, psychological operations etc.

Scholars of hybrid warfare recognize this: they divide hybrid warfare in two phases – a political preparatory phase and the actual hybrid phase. But as I said this is slightly problematic, because the hybrid phase that involves actual fighting is rare. So, with too much focus on hybrid threats we are at risk of seeing the tree and losing the forest.

Any form of unconventional conflict may at any time become a hybrid war. However, before a war turns hybrid it is purely political. A term such as political warfare that includes propaganda, disinformation, psychological operations, ideological conflict, economic and trade wars, cyber warfare etc. is more inclusive and it describes the reality better. It is a more useful term in describing what may be the new normal of international affairs: great powers fighting constantly with every means that they have at their disposal – short of war- for popularity in cyberspace, for winning the hearts and minds of the people.

Surely though, all these activities such as propaganda or disinformation, is nothing new. Fake new is old news. Why are we suddenly talking about them all the time? Why are we identifying these state activities as a definitive security issue? What has changed? Three things:

First, modern information and communication technology has collapsed the traditional conceptions of space and time. The information revolution as created a network society that is demonstrating distinctive patterns of behavior and political significance. We are all connected through the Internet and the New Media, and we don’t act as merely individuals or groups but as networks. And networks are easier to infiltrate and manipulate than closed groups and disparate individuals.

Second, the public opinion – because of the above – participates almost in real-time with every aspect of domestic and foreign policy. Public opinion matters more than ever in a democracy and this is why it is being targeted by state and non-state actors.

Third, and in addition to the above, the public opinion seems to be moving away from traditional concepts of truth as an objective external reality. The ‘post-truth’ debate is not a theoretical or conceptual issue; it is a practical, noticeable cultural shift of people distrusting the experts, the state institutions, the academics etc. As a result, the network society is more receptive to fake news, alternative facts, conspiracy theories, propaganda etc. in a cyberspace where alternative facts and truths are generally accepted.

The combination of 1-2-3 makes for a very explosive mix – a nearly permanent state of conflict between state and non-state actors, a new race for the heart and mind of the people. Malign actors now have the technological tools to wage political warfare against the population on a massive scale, while our societies are more susceptible than ever to propaganda and disinformation.

The EU response so far has been convincing and effective – to the extent that fake news and disinformation operations can be countered at all. There has been a systematic effort to raise awareness, create institutional structures to counter disinformation (e.g. StratCom East), there is an ongoing initiative to create a legislative framework against spreading disinformation and a social and institutional pressure for the self-regulation of new media giants such as Facebook and Google.

However, it needs to be noted that all these malign influences – name it political warfare, hybrid warfare or any other term currently in use – they are not creating our problems out of thin air. They are merely exploiting the crises that we cannot deal with efficiently. Before we start circumcising our freedom of speech and other fundamental liberties, we need to listen to the valid concerns of the citizens, put our house in order, so to speak, and deal with the source of the problem. Improve our governance, improve our economy and business environment, mitigate social and economic inequality, deal effectively with increased migratory flows, improve transparency on the EU level.

** This is a transcript of a speech and not an article or other written form.