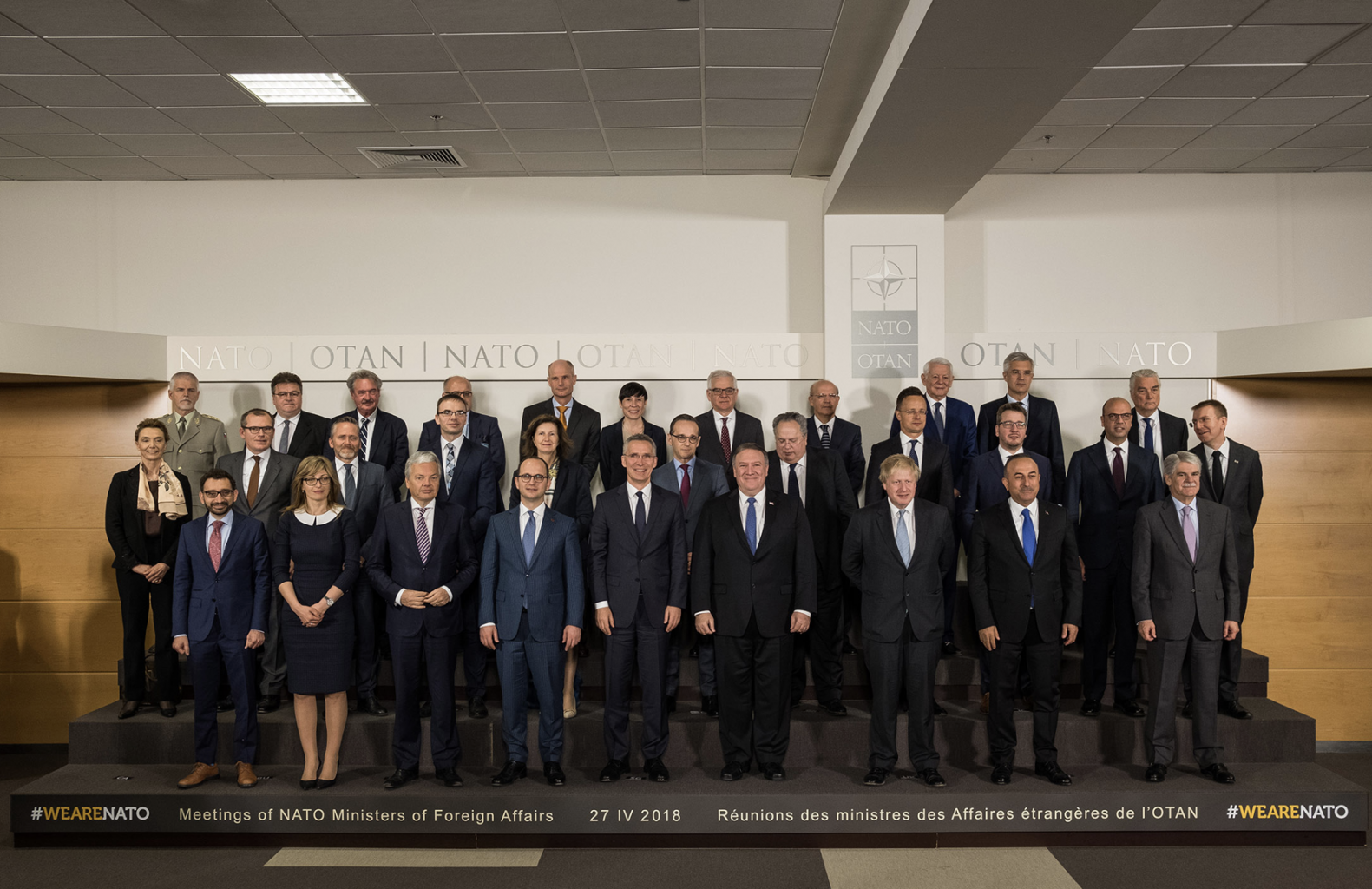 NATO’s foreign ministers met on 27 April 2018 for the last time at the old NATO Headquaters as part of the preparations for the biennial NATO Summit to be held in July this year in Brussels. Russia, Syria, Iran, Iraq, Afghanistan, Ukraine and Western Balkans were among the topics that were discussed.

U.S. Secretary of State Mike Pompeo hit the headlines throughout the event. Pompeo addressed NATO foreign ministers only12 hours and 34 minutes after his confirmation. He made it clear that ‘the United States is eager to continue to lead NATO’ and U.S. commitment to Article 5 is ‘ironclad’. After praising Allies for what they have done so far to meet defense expenditure guidelines that have been agreed at the Wales Summit, he also urged them to present a credible plan on how to meet the guidelines before the following Summit.

Russia was at the top of the agenda, as expected. In the kick-off press conference the Secretary General told about the possibility of a new NATO-Russia Council meeting probably before the Summit, which is in line with NATO’s dual-track policy that advocates strong deterrence and defence combined with meaningful dialogue with Russia. After the meeting, the Secretary General reaffirmed NATO’s intention to continue to work towards this direction. However, Pompeo said that, ‘NATO should not return to business as usual with Russia until Moscow shows a clear change in its actions and complies with international law’.

The other important security concern for the Allies is MENA which was also addressed in the FORMIN. Ministers agreed on the concept of operations (CONOPs) of the new training mission of several hundred toops in Iraq to be launched at the Summit in July. NATO will train Iraqi instructors and help build Iraqi military schools.

Statement issued by foreign ministers on Afghanistan reaffirmed conditions-based approach for Resolute Support Mission which is being conducted by more than 15,000 boots on the ground. The Kabul process, peace talks that was initiated in June 2017 between National Unity Government, Taliban and some international stakeholders, was also praised. Before parliamentary elections to be held on 20 October 2018 and the presidential election later in 2019, this Afghan-led and Afghan-owned peace process is necessary to convince Taliban not only not to boycott the elections as it did before but also to prevent Afghanistan from once again becoming a safe haven for international terrorists.

One of the main areas that NATO focuses on in Afghanistan is funding of the Afghan Security Forces as part of a broader international effort. In this respect, NATO-run Afghan National Army (ANA) Trust Fundwas established to support Afgan Security Forces and institutions which will continue to be funded by the Allies and Partner Nations till 2020, as agreed at the Wales Summit. To date, near 2.25 bn $were contributed.

Reportedly, Ukraine expressed its aspiration to join NATO, once again in NATO’s Open Door Policy session. However, a law that limits ethnic minorities’ rights on educating in their own languages including a Hungarian minority that resides in Transcarpathia region of western Ukraine caused tensions between Hungary and Ukraine. Concerning the issue, U.S. Permanent Representative to NATO Kay Bailey Hutchinson expressed her frustration when Hungary blocked a NATO – Ukraine Council early this year. While the Secretary General remains neutral on the issue, dispute seems revisited.

The Secretary General also pointed out that as soon as the name issue is resolved between Greece and Macedonia, NATO is ready to invite the country to become one of its members. However, Russia warns the country that in case of a Russo – NATO conflict Macedonia might become a legitimate target. Late in March this year, Macedonia decided to expel a Russian diplomat after Salisbury nerve agent attack in consultation with “allies and partners, the EU and NATO”, and in solidarity with Britain.