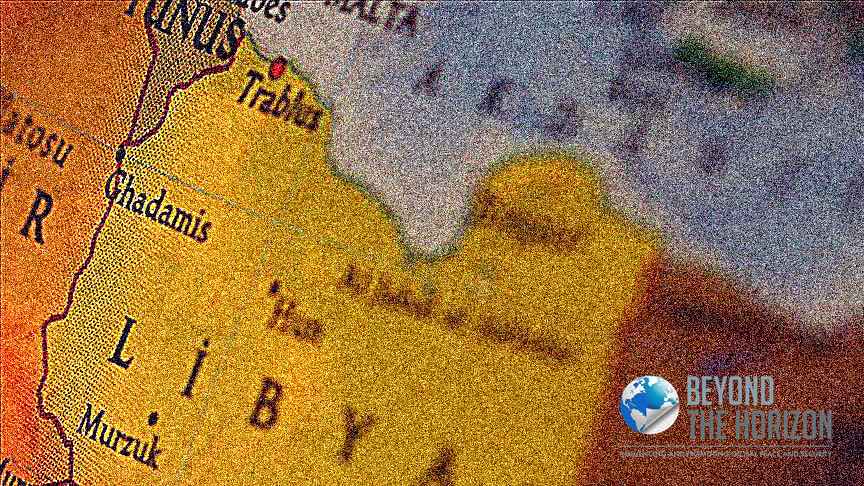 In the last couple of weeks, we have been witnessing the most active times of the Libya crisis According to news coming from front lines, defenders of the Tripoli are in dire straits in the eye of Haftar’s LNA. Increased Russian interference; US reactions to Russian involvement; two agreements between Serraj and Erdogan —the first one is about partition of maritime zones in the Mediterranean, and the second one is about Turkish rapid military reaction force to Libya; international reactions to these agreements; and Haftar’s “final battle” total assault on all fronts shifted the orbit of the longstanding stalemate in Libya.

The superior military power of Haftar’s forces, particularly the air assets, started to break the resistance of GNA affiliated militias in defense of Tripoli. Despite international recognition, having been left alone against Haftar’s reinforced attacks, GNA was desperately looking for an external backer, with enough power and will to provide required military support. Lacking sufficient backing to withstand well-supported LNA attacks, Head of GNA, Feyyaz al-Serraj, consented to sign the maritime zone agreement, which was aspired by Ankara for a long time to break its loneliness in the Mediterranean resource sharing. With this agreement, GNA affiliated Tripoli defenders may get the military support that they need, but Serraj and his GNA may lose its international legitimacy.

Eastern-based Libya House of Representatives (HoR) started an initiative to take over GNA’s international recognition in the eye of international organisations, such as European Union, Arab League or African Union, which would be followed by United Nations. They argue that HoR has more legitimacy to represent the Libyan state. Egypt is standing for the thesis of HoR playing the role of  leader of the Arab League. Serraj’s last move of signing an agreement with Erdogan angered many international and regional actors. Those angered actors might make common cause with Egypt and HoR, and GNA might lose its chair in international organisations to the interim government of HoR.

The Positions of the Sides

The HoR/Egypt argue according to Skhirat Agreement, head of GNA, Serraj cannot sign and ratify international agreements on his own, and as such GNA has lost its legitimacy. In late 2015, UN had brokered a peace agreement among the parties of Libya Crisis; called Skhirat Agreement, in reference to the Moroccan coastal city of Skhirat where the agreement was signed. This was accepted as the framework and basis for a political settlement in Libya, which necessitated the establishment of a Government of National Accord (GNA) in Tripoli just for one year which could be extended for one more year only.

According to Skhirat, GNA can start its term with a vote of confidence from the House of Representatives (HoR). International agreement, according to the same founding agreement, can be concluded by Presidency Council (PC) of the Council of Ministers (unanimity of the head of GNA and his five deputies is required to make a decision), provided that HoR endorses them. In the early 2016, GNA was established and took over the government of Tripoli. Even though it has never been endorsed by HoR (not to mention the problems related to the functioning of HoR), GNA has been accepted as the legitimate Libya Government by the International society in the last four years. That is why HoR/Egypt advocate that GNA has no legitimacy.

Even though the dominance of political Islamists (Muslim Brotherhood) over the new Tripoli government was very well known, with the sponsorship of the UK, GNA gained that international recognition. Today, it is evident that the majority of the international actors, including the EU (excluding the UK), Russia and the US are not happy with GNA authority in Libya’s capital. That seems the very reason for their silence against the violations of Khalifa Haftar. To remember: Haftar is a renegade Ghaddafi general, famous with his sharp rhetoric against extremist groups in Libya. Tearing up a long-awaited UN peace process, in April 2019, Haftar initiated an offensive upon capital Tripoli. Since then, he has been blatantly violating UN arms embargo, and his attacks caused many civilian casualties. Up to now, the UN Security Council and other international actors failed to address his violations adequately.

Hence, it is evident that, while officially recognizing the GNA as the legitimate government of Libya, prominent international actors silently wish for Haftar’s success against the GNA. However, not with the support of their political opponents. The fact that the actor backing Haftar in his bid for power will enjoy more political, economic and military privileges once he succeeds is especially bothering. For this very reason, although finding him in fact a preferable actor due to his history in USA and stance against Islamist groups, the US does not want Haftar to be successful with the support of his political opponent; Russia. This shows itself with growing reactions of US officials to increased Russian involvement in the Libya crisis.

For the “West”, the problem is that Haftar is not as powerful and successful as they want him to be. His march upon Tripoli turned into a military stalemate. The more this stalemate continues, the more Europe and the US will lose control over Libyan actors. From the eastern perspective, Russia is increasingly having more influence over Haftar, yet, not as much as Haftar’s foremost backers UAE and Egypt. Russian policymakers are smart enough to also maintain good relations with western Libya authorities. Inviting Serraj to Africa-Russia Summit, last month, was an essential indication of the continuation of this bidirectional policy.

The signing of Libya-Turkey agreements turned the crisis into a zero-sum game. With the addition of fight for natural resources of the Mediterranean to the Libya crisis, now the stakes are higher than ever. The delicate situation of Tripoli defense urges both parties of the conflict to act in super haste. In a couple of days, the Turkish Parliament ratified the Libya agreement, and Erdogan voiced the possibility of sending troops to Libya. Seeing imminent Turkish military involvement, Egypt’s Sisi signaled Egyptian military involvement to back Haftar. According to some sources, Egypt already started to dispatching T-72 tanks and APCs to support Haftar.

Moscow-Ankara relations is another essential equation for the Libya Crisis. Turkey will increase its military support to GNA. Rather than regular military units, it would be through the deployment of mercenaries and heavy weapons. Russia, however, would not allow a powerful Turkish intervention, which would lead to the total defeat of Haftar. Considering the latest NATO and Syria related crisis, Erdogan and Putin are of great value for each other. As seen in Syria, without conflicting with Turkey, Putin is able to limit Erdogan’s policies through strategic manoeuvres. As they did in Syria, Putin and Erdogan might reach a compromise solution for Libya. Nevertheless, the parameters of this compromise are still to be seen.

The disturbance of Egypt, Greece, Russia, Israel, Cyprus, Italy and France and some other EU members from new Libya-Turkey agreement is likely to lead to a new counter political and military coalition, which will make the relations in the Mediterranean tense. For Egypt, it is seen as a national security issue. The country shares a 1,115 km borderline with Libya. Since the military coup in 2013, Egypt is at odds with Turkey and sees the Muslim Brotherhood as its main enemy. It is highly likely that Egypt will militarily oppose a Turkish intervention to Libya.

The annoyance of Italy, France, Greece and Cyprus would bring about the repositioning of the EU. Haftar will use the widespread anger to GNA-Erdogan maritime agreement and try to erode the GNA’s legitimacy in the Arab League, African Union and European Union. GNA might lose its political representation in the EU to its opponent eastern government.

The position of the US will be critical. The US is still reluctant to adopt a decisive role and its policies are ambivalent. When thought together with latest confrontations during the military operations against Kurdish groups in Syria, Turkey’s purchase of Russian S-400 air defense systems, new US sanctions against Turkey, US disturbance from Libya-Turkey agreement and US critics against Russian role in Libya, it is not easy to foresee the direction.

All these international meddling coincided with the new UN Panel of Experts report on Libya, which evinces and condemns the violations of UN Security Council arms embargo on Libya. Military backers of the fighting groups of Libya are again using their legitimacy argument to justify their meddling. Turkey argues that they are invited by the internationally recognized government of Libya, while Egypt and others argue that they are invited by a legitimate representative of Libyans, HoR, and its government. The international validity of their arguments, most probably, will be determined according to the success of their intervention.

Since the fall of Ghaddafi in 2011, the crisis in Libya was a low to mid-intensity internal conflict with proxy war elements. Following the aforementioned latest developments, regional and international actors are more and more directly involved in Libya. If this trend continues, the conflict might overstep the boundaries of Libya and spill over the region. This constitutes a very high risk against the stability of Southern Europe and the Mediterranean. The prominent international stakeholders of the Libya crisis, like Italy, France, UK and US, who left the crisis unsolved in the last eight years, who left GNA so desperate, and who overlooked the spoilers (including Haftar), will share part of responsibility.

*Erman Atak is Non-resident Analyst at Beyond the Horizon ISSG.