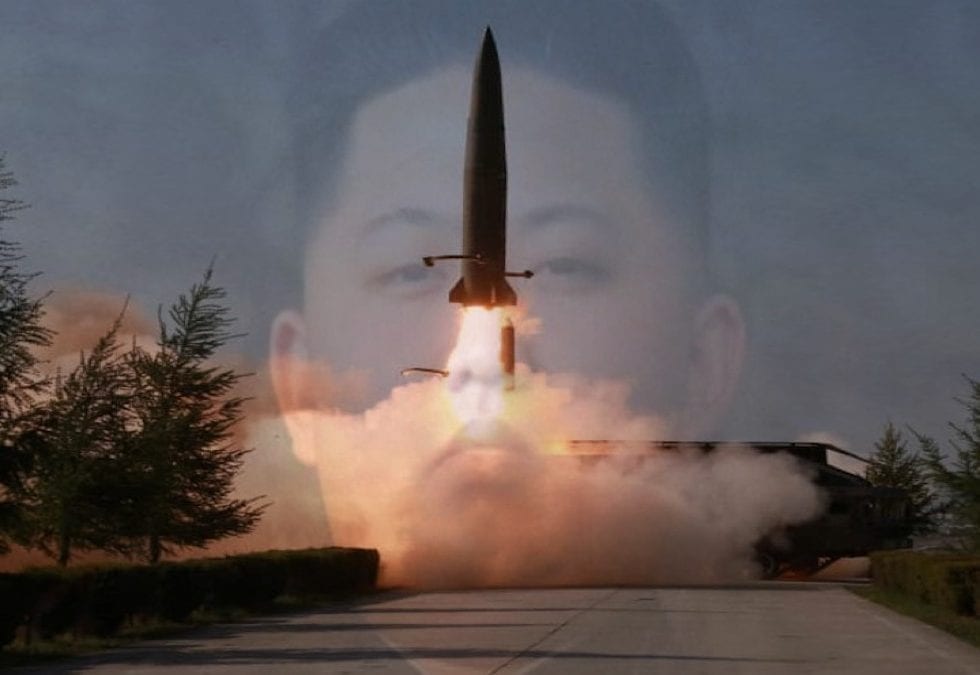 On 16 August, North Korea fired two missiles into the waters off its east coast. According to US and South Korean officials the two were short-range ballistic missiles (SRBM). They flew approximately 142 miles at a maximum altitude of 18.6 miles and top speed of Mach 6. The event has been considered a response to an ongoing military exercise between the United States and South Korea to last until the end of August. The missiles seem to belong to a newly developed short-range missile type which first appeared on 31 July, and then on 2 August and finally on August 5.

On 2 August, North Korea launched two short-range missiles from the east coast as a sign of its distaste about talks with Washington on the nuclear weapons program that did not progress as expected. According to the South Korean military, the missiles reached a maximum altitude of 30 miles and six times the speed of sound and flew about 248 miles. The range of missiles is of particular concern as it has the potential to cover all areas of South Korea.

Earlier on 25 July, two missiles had been fired by North Korea. The missiles were tested from Wonsan on the eastern shore and reached a maximum altitude of 30 miles. The first missile flew about 270 miles, and the latter reached a range of 430 miles. Initial assessments hint at a new model.

All in all, North Korea has test-fired six missiles since July 25. North Korea tested short-range missiles on May 4 and 9 as well. The tests included at least two new types of short-range ballistic missiles and a mobile launcher capable of launching multiple rockets.

The first two missiles were fired as a response to Terminal High Altitude Area Defense (THAAD) training exercise in South Korea in early May and North Korea described it as “a military provocation.” North Korea stated the U.S. should “stop all hostile acts” toward North Korea if the U.S. really wants peace on the peninsula.

Many observers attributed the test to the intention of attracting the attention of Trump administration following several summits that did not result in the desired outcome. This move has also been seen as a warning to South Korea that is strengthening its armed forces.

According to the U.S. and South Korean intelligence analysts, the missiles fly at a lower trajectory, and it seems to be able to maneuver in flight, which makes it difficult to intercept using ballistic missile defense systems, and they have yet to confirm the exact type of missile. The development of missiles with this trajectory and maneuverability could be a response to the THAAD ballistic missile defense systems which were deployed in South Korea in 2017 by the U.S.

In May, North Korea twice missile tested a new-range ballistic missile, a weapon known as KN-23, which some compared to Russian 9K720 Iskander (NATO reporting name: SS-26 Stone). It is not clear whether the missile tested in late July, and early August are modified of this missile. CNS expert, Jeffrey Lewis suggested that the maneuvering capability of the missiles shows that they were designed to escape missile defense systems, e.g., Patriot and THAAD in South Korea.

According to the South Korean Chiefs of Staff the missiles are assessed to be a variant of the Russian 9K720 Iskander as regards flight pattern characteristics, altitude, and range. An officer from South Korean Joint Chiefs of Staff stated in late July: “Differing from a general parabolic trajectory, the Iskander shows a complicated flight pattern and what North Korea fired yesterday showed a similar one.”

Arguably, the KN-23 presents differences compatible with local design and production despite the overall similarity between the Iskander and the KN-23. This short-range ballistic missile was exhibited for the first time in the parade that was held on 8 February 2018 and had the potential to cover South Korea with nuclear strikes. The U.S. also calls this missile KN-23. Based on parade photographs, CNS estimates that the engine diameter of the missile’s solid propellant rocket is between 0.9 and 1.0 m, the same level as that of the Russian SRBM missile Iskander.

Traditional ballistic missiles can fly on a curved trajectory and follow an elliptical orbit around the center of the Earth. But the KN-23, which resembles the Russian missile Iskander, has followed a lower trajectory, spending most of its flight at an altitude of 25 to 30 km, making it difficult to intercept once it is fired. Its altitude,  for example, is too high for Patriot and too low for systems like THAAD and Aegis.  Even though no system is invulnerable, new missiles of North Korea seem to have been designed to abuse the most critical gaps in Seoul’s armory.

Another well-known missile expert, Melissa Hanham, told Reuters in May that the types of missiles tested by North Korea, judged by the Trump administration to be less critical than intercontinental ballistic missiles, were built and tested in 2017 and they are the types of missiles “that will start the war.”

When the tests are taken into consideration, the missiles have a few common characteristics:

They are all short-range ballistic missiles with mobile launchers that fly at low altitude, and use solid fuel. What is more, their unconventional flight path makes it hard for missile defense systems to intercept them.

Repercussions of the New System to Western Security Community

Mr. Kim sent a letter recently to Mr. Trump, who said Mr. Kim issued a small apology about the missiles tests, and Trump said the North Korean leader had expressed dissatisfaction with the letter about joint military exercises between the United States and South Korea currently taking place on the peninsula. Mr. Trump stressed that in his letter, Mr. Kim underlined that he wanted to continue dialogue with Washington as soon as the joint military exercise between the U.S. and South Korea ended later this month.

Trump downplayed the missiles tests, and experts say Trump’s downplaying of the North’s arms demonstrations allowed an increase in its capabilities and created leverage before negotiations.

Although the missile tests violate U.N. Security Council resolutions that prohibit any ballistic missile development or testing by North Korea, the launches do not violate the voluntary moratorium on long-range ballistic missile testing that Kim announced in April 2018. The U.N. Security Council has particularly imposed new sanctions only when the North carries out long-range ballistic launches.

On 1 August, at the request of Britain, France, and Germany, the U.N. Security Council held a closed-door meeting to discuss latest missile tests. The Council issued a joint statement urging Pyongyang to “take concrete steps towards complete, verifiable and irreversible denuclearization,” and called on the Security Council for “unity in upholding its resolutions” in favor of a series of sanctions aimed at drying up the finance for nuclear and missile programs of North Korea. All three countries said international sanctions should remain in force until North Korea’s nuclear and ballistic missile programs are abolished.

North Korea continues to exhibit its abilities to build new weapons even there are strict economic sanctions. North Korea keeps developing and firing short-range missiles, while it has suspended nuclear weapons testing and long-range ballistic missile launches, such as those that could potentially reach the continental United States.