Is there a possibility of leaving the Montreux Convention? 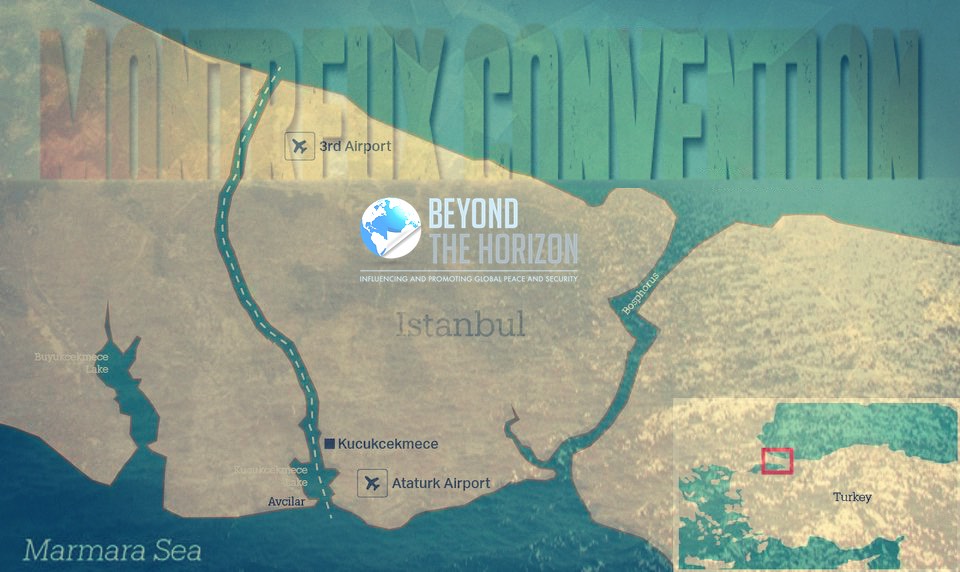 The reemergence of the Canal Istanbul project brought some discussions on the Montreux Straits Convention on the agenda. The Treaty of Lausanne and Montreux Straits Convention were proof of the existence of the newly established Republic of Turkey and are a symbol of the acceptance of Turkey’s sovereignty and independence by the international community. Therefore, due to the delicacy of these documents, extra care had been taken not open both to debate, until this day.

In what context the Montreux Straits Convention was signed?

In the Treaty of Lausanne, there were three opinions brought forward regarding the situation of the Straits.  The opinion of the Allied States was to open the Straits to both war and merchant ships, demilitarize both sides of the straits and to give the management of the straits to an international commission. The Soviet Union was suggesting the free passage of commercial ships, the closure of the Black Sea to warships of non-riparian states and wanted Turkey to fortify the Straits. On the other hand, based on the 4th Article of National Pact (Misak-ı Milli), Turkey advocated keeping the Straits open to world trade and international transportation, provided that the safety of Istanbul and Marmara was ensured.

According to the Treaty of Lausanne that was signed on 24 July 1923, the control of foreign ships passing through the Straits was transferred to the Straits Commission, also the Straits were demilitarized, and the management was left to the League of Nations. Turkey’s sovereignty over the Straits was partially restricted.

The most important reason behind the acceptance of these limitations by Turkey was that the world was thought to be getting disarmed from that time on and the Straits Region was under the guarantee of the League of Nations. However, as disarmament efforts did not reach positive results, the League of Nations remained ineffective in the face of the aggressor behaviors of Italy and Japan. Thus, the terms and conditions were now changed for Turkey.

Turkey, with the appeals, made just in time and on the spot by very successfully analyzing the changes in the international arena, paved the way for renegotiation of the Straits issue. The appeals were based on the basic rebus sic Stantibus (conditions have changed) rule of international law.

On 22 June 1936, it was decided to convene the Straits Conference in Montreux. Turkey tried to get support by negotiating the amendment (modification) proposals with the Ankara Ambassador of the Soviets before the conference.

During the conference, British and Soviet arguments clashed intensely. While the Soviets demanded the warships of the coastal countries of the Black Sea to cross the Straits without any restrictions, the British wanted merchant vessels to be granted freedom and asked to increase the amount of tonnage allowed for warships to carry. As a result of the French supporting the Soviets and British supporting Turkey, thanks to the conjuncture, after the two-month-long conference, a consensus was reached, and the convention was signed. (Since 1936, the purpose of Hitler’s Germany was to keep Turkey away from England and USSR and to include it to the revisionist group.  England gave support to Turkey both to keep them on their side and to create a balance against Italy in the Eastern Mediterranean.)

Turkey, with a very accurate timing and a multifaceted diplomatic maneuver, removed the restriction of sovereignty over the straits, freedom of passage for merchant ships was confirmed once again, the passages of warships was revised in line with the security of Turkey and the Black Sea riparian countries.

The purpose of the convention was stated as regulating the passage and the transportation of vessels through the straits, in the context of the security of Turkey and the coastal states of the Black Sea.

Can the Montreux Straits Convention be canceled?

The cancelation of the convention is regulated under Article 28.  According to this Article, the validity period of the convention is 20 years. This period ended on November 9, 1956. However, in order for the cancellation process to begin, one of the signatory states must report the termination declaration to France, which is the deposit state, as stated in the contract.  Although the termination or amendment of the convention was brought up several times by the USA, Britain and the USSR during and after World War II, this process has never been practiced, until now.

If one of the signatory states initiates this process today; the convention will remain in force for two more years starting from the date of the request and will be canceled at the end of this period. According to the convention, signatory states must come together again at a conference to create a new contract. However, at the end of this conference, the states may not be willing to sign a new convention.  What will happen in this situation?

What happens if a new convention is not signed?

If a new contract cannot be made, two separate international regulations will remain valid. One of these is Article 23 of the Lausanne Treaty and the other one is the first paragraph of Article 1 of the Montreux Straits Convention. With these regulations, it has been recorded that the implementation period of the freedom of passage through the Straits and freedom of transportation will be endless.  Unless a consensus is reached about which of the innocent passage or transit passage regimes will be applied, the situation will remain uncertain. However, in all circumstances, Turkey as a sovereign state has the authority to request the innocent passage and regulate traffic flow. Under these circumstances, Turkey may regulate the passage through and transportation through the straits, in accordance with the abstract principles in Article 23 of the Treaty of Lausanne and Article 1 of the Montreux Straits Convention.

However, this regulation will not include the freedom of possession of warships of non-riparian states in the offshore areas of the Black Sea. This issue will also be the main subject to be discussed. Yet the Montreux Straits Convention had regulated the number of time warships can stay in the Black Sea and their tonnage as well as the fairway regime, it has taken safety concerns of riparian countries and Turkey into account.

What does Montreux mean for the Russians?

For Russia, the most important part of the Montreux Straits Convention is the restrictions that foreign warships are subjected to in the Black Sea. Despite the relatively weak Russian Navy after the Cold War, the warships of other NATO member states, especially American, did not pose any danger to the Russians in the Black Sea thanks to the Montreux regulations. During this period, Turkey’s “problems should be solved between the Black Sea riparian countries, there should not be outside intervention” policy was effective in not having problems. However, one aspect should not be overlooked. After Russia annexed Crimea in 2014, it started building a modern and powerful navy. They are now shaping the security environment both in the Black Sea and the Eastern Mediterranean by transferring forces between Sevastopol and Tartus. Russia, by benefiting from its good relations with Turkey, uses Montreux’s restrictions for submarines for its own interest from time to time.

It is necessary to say that the Montreux Straits Convention is also very important for Russia. A convention that can replace Montreux and reorganize its restrictions on the passage of warships and their presence in the Black Sea will contain looser conditions than Montreux under all circumstances, with the influence of the United States. This will make the Black Sea security fragile, which will disturb Russia more than any other state.

Is Montreux a bargain topic with the Russians?

Turkey may want to turn Montreux to a matter of negotiation with Russia, by using the Canal Istanbul project. However, this would be a dangerous game.  Montreux is a balanced regime and assures Turkey great privilege and rights.  In the Corfu Strait Case, the International Court of Justice decided that in peacetime, warships have the right to pass through the straits used for international transportation without prior permission. It is obvious that if the Montreux Straits Convention is to be canceled, the substitute regime will not entitle Turkey with more rights than today. Turkey should continue its policies aiming to protect the Lausanne and Montreux documents, as it has been doing until today. Turkey also should not allow Russia’s policies of loosening the regulations.

* Security Analyst at Beyond the Horizon ISSG