Drone swarms: coming (sometime) to a war near you. Just not today 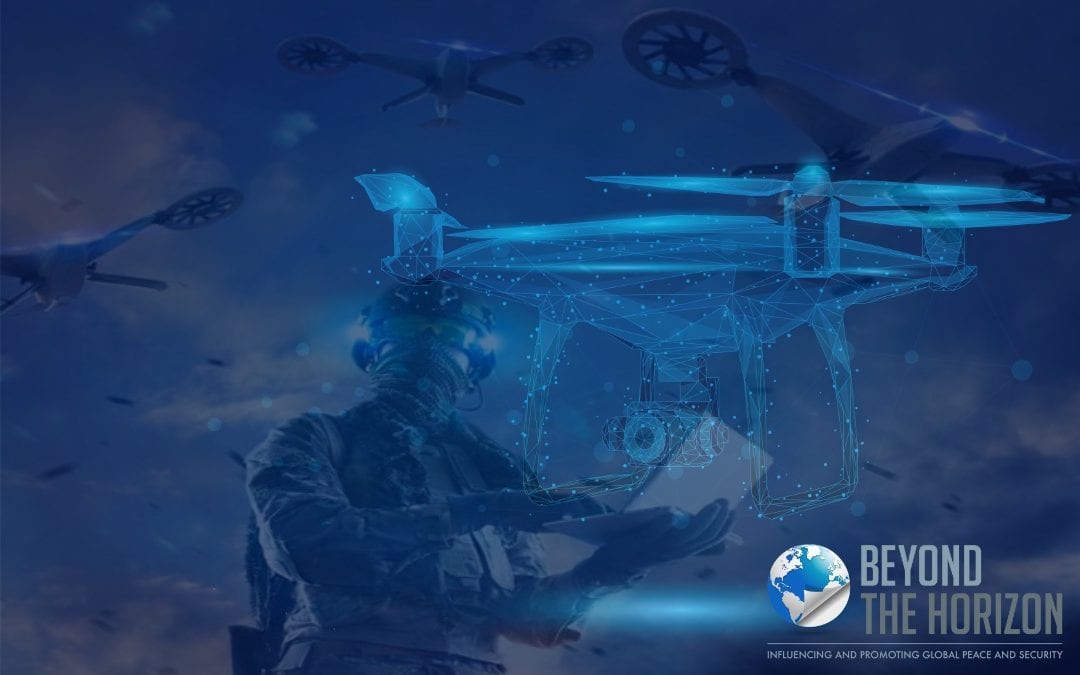 The world got a sneak peek at the future of war last fall when two former Soviet republics in the Caucasus Mountains launched a high-tech barrage of loitering munitions as well as Turkish-, Israeli-, and locally-made drones at each other during a six-week fight over a region disputed by Azerbaijan and Armenia. Media and think-tank writers covering the battle frequently conveyed an eye-popping assessment: Warring factions had used futuristic swarms of drones in the skies over Nagorno-Karabakh. But does this apparent technological leap in warfare mean that such swarms will be a mainstay in conflict?

To spoil the surprise: No, don’t expect a swarm buzzing over your head any time soon.

While militaries are developing the technology, we shouldn’t call the drone formations on the contemporary battlefield swarms. Unlike true swarms, which use artificial intelligence (AI) to operate autonomously, today’s swarms are pre-programmed or remotely controlled. The individual drones neither communicate within the swarm nor do they adapt to their environment. However, at a time of fast-paced drone proliferation, militaries around the world are actively pursuing research and development in swarms.

Even though no one has developed true, autonomous drone swarms yet, we should still be concerned about their humanitarian implications. Just as militaries are preparing for the future of war by developing counter-swarm technologies, the arms control community should start thinking about where to draw the boundaries around their use.

The swarm is coming. In 2017, the US Department of Defense launched a swarm of micro-drones over California where more than 100 vehicles made decisions without human help. The year before, a Chinese academic and corporate partnership reportedly pulled off a similar feat with 67 drones. There is no doubt that the people behind the US Strategic Capabilities Office’s swarm of Perdix drones or the Chinese partnership’s aerial drones do hope to develop fully-fledged swarms—but they are not there yet. We can say the same about the United Kingdom’s drone swarm squadron, Russia’s Flock 93, Chinese naval swarms, and a Turkish “swarm concept,” as well.

According to the swarm robotics literature, swarms are a group of systems that operate as a collective. In a swarm, the individual units interact with each other and have common goals. They execute them as a collective while responding to their environment. “They are going to do their own thing,” a US Air Force official who oversaw the Perdix program told reporters, according to Air Force Magazine.

Many formations that pass as drone swarms in the media are actually not swarms at all. For example, during the drone show at the 2018 Winter Olympics in Pyeongchang, South Korea, all the units were programmed to fly in a certain pattern and did not interact with one another. The same was true during a recent Indian military swarm demonstration. The Indian drones did not interact or generate their own strategy.

Likewise, a Turkish attack on a Syrian military convoy that media reports characterized as involving a “swarm” really involved multiple remotely controlled units. “This was a mass coordinated attack, not a ‘swarm,’” one expert told the military news site C4ISRNET.

Swarms, rather, are best understood by considering their counterparts in the animal kingdom: schools of fish, flocks of birds, or packs of wolves. A true swarm works together to achieve the mission; the whole is more than the sum of its parts. Following this definition, swarms do not exist yet on the battlefield.

Admittedly, the dividing line between a true swarm and just a lot of drones doing something is not always clear. It is now possible to control multiple drones with a single application, sending commands to them all at once. However, the individual drones do not communicate and coordinate. This is likely what happened in the 2019 drone attacks by Yemenite rebels.  Drone makers and militaries are obviously making great strides, but at best, the displays we’ve seen so far amount to proto-swarms not examples of true swarming technology.

Swarming isn’t easy. There are a lot of obstacles to building an effective, true drone swarm. Commanders will face the cognitive challenge of keeping track of a high number of systems at the same time. Communicating with the swarm will require a lot of bandwidth. While a drone swarm may comprise small, cheap, and disposable units, these characteristics will put stark limits on energy use, on-board processing power, communication equipment, and sensors. All these factors mean developers will find it difficult to make a useful swarm.

Because swarm development is still at an early stage, the vast majority of swarm research is conducted with simulations or in a controlled laboratory environment. In the rare cases where researchers test swarms outdoors, they do so under simplified conditions, through using off-board communications, simple environments and missions, and just a few drones at a time.

In a December 2020 test, researchers working on the US military’s Golden Horde program, for instance, simplified a mission by only using two weapons that had been outfitted to demonstrate swarming technology. Both of the weapons used a programmed strategy playbook where, depending on the environment, the swarming algorithms would initiate different behaviors to execute the mission—a tool that we might see more often going forward to ensure some level of human control over the mission. However, the mission failed as the wrong target was bombed.

How will swarms be used? Even though swarms have not arrived on the battlefield yet, we can make some informed predictions about their implications for the future of warfare.

Most forms of automation create new opportunities but not fundamentally different functions. The automated tasks are often not new. They’re currently done by humans, but AI and robots are just better at them. Automation can also open up different use-cases. Drones offer new tactical opportunities but do not do anything radically different than inhabited aircraft does. Automating a platoon might reduce risks for humans, but people can drive platoons without AI as well. This is different for swarms. There is no equivalent to swarms without autonomy. We don’t know if swarms will fundamentally change the nature of warfare, but their unprecedented capabilities make it harder to assess what role they will play.

In the coming swarm era, militaries will confront a different trade-off between quality and quantity of new technology. New weapons systems are becoming evermore expensive, and while the big spenders among the world’s militaries might still fill their arsenals to the roof, most countries can only afford to field just a few complex systems. Swarms change the equation. While developing swarms will likely cost a lot (most notably to develop control software), producing individual units could be cheap compared to other weapons. Likewise, in a swarm war, it won’t be the end of the world if a few nodes go down; replacing them might be affordable.

We don’t know for sure how militaries will employ swarms, but some possibilities include using them to overwhelm enemy air defenses, attack enemy aircraft in aerial dogfights, surround warships, surveil large areas, create large nets of underwater mines, or control territory. As no swarms have been used yet in battle, we don’t how well they would work for such missions.

Swarms and arms control. Swarms pose several potential humanitarian problems. First, there is the issue of whether people will have meaningful control over the multiple units in a swarm. Commanding a swarm will be cognitively complex for the operator. Limited bandwidth could make it difficult for operators to communicate with the swarm as the units also communicate with one another. If individual units of a swarm are shot down or malfunction, they will pose a similar threat as cluster munitions—the unexploded ordnance might harm civilians and the environment. Finally, as drones interact and adapt to their environment they will behave in unpredictable ways that could risk violating international law.

For the arms control community, the novelty of swarms means preparing for them is far from a straight-forward exercise, and in this domain, uncertainty is often a reason to avoid or postpone difficult decisions on regulation. Experts and negotiators face a dilemma: The impact of a new technology is hard to predict until it is widely developed and used, but regulating or changing how it is used becomes more difficult as the technology becomes more entrenched.

Another reason countries may procrastinate is that they may be uncertain about the extent that these technologies will benefit them. They may want to hold off on a decision on regulation until they can better predict whether the technologies are more likely to harm or help them.

Unlike the arms control community, however, militaries aren’t waiting around to figure out how to deal with swarms; governments cannot afford to take that risk. Militaries are already developing counter-swarm technology, including microwave technology, electromagnetic interference, and even nets.

Swarms don’t exist yet, despite frequent claims in the media. But militaries are clearly making advances. It’s time for the arms control community to deal with the potential problems that swarms might pose. Most arms control treaties aim at controlling individual weapons, but the harm of swarms does not stem from the units themselves, but rather from their indirect and collective nature. Arms controllers will need a new conceptual toolkit to think about and deal with the risks. Militaries have long moved away from valuing only military assets that are individual, physical, and weaponized and toward a network-based frame. Maybe the arms control community should follow suit.

* Maaike Verbruggen is a Doctoral Researcher at the Vrije Universiteit Brussel
This commentary was first published in the Bulletin on February 03, 2021.