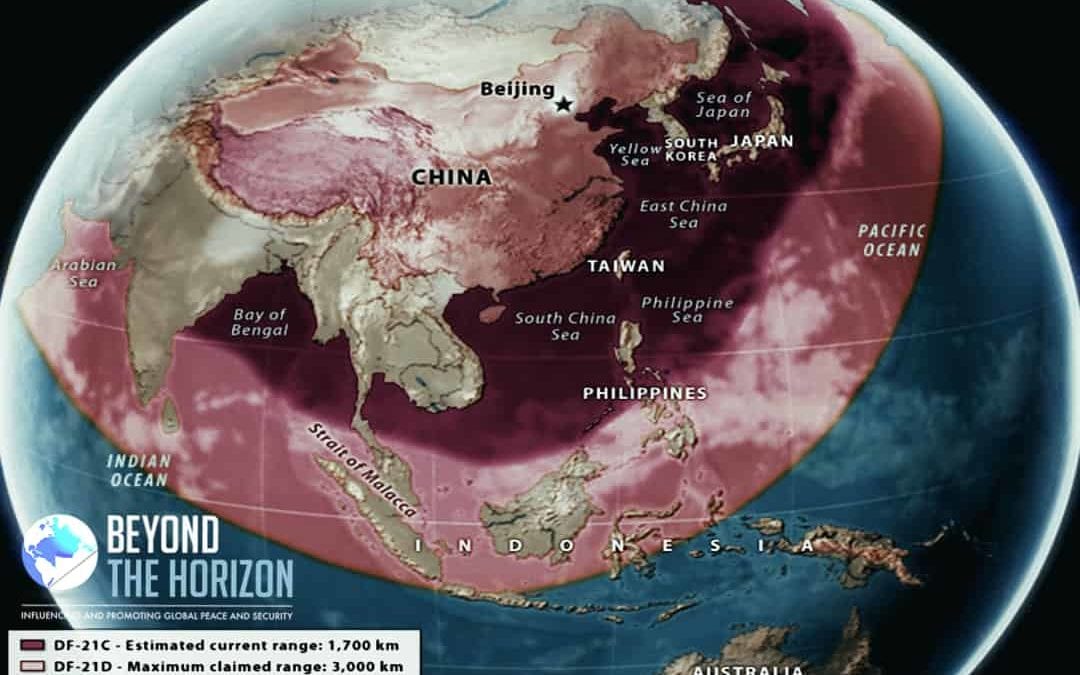 The DF-21D (Dong Feng** 21D), a road-mobile, medium-range ballistic missile (MRBM), is the first ASBM in the world designed to strike maritime vessels, and the first to make a difference in modern warfare. The DF-21D was considered operational in 2012. It is capable of a range more than 1,500 km, and is equipped with a manoeuvrable re-entry vehicle (MaRV) warhead and is expected to be quickly recharged in the field.

The People’s Liberation Army Rocket Force (PLARF) continues to increase its stock of ballistic missiles such as DF-21D MRBMs and DF-26 IRBMs. The conventionally armed DF-21D ASBM provides the People’s Liberation Army (PLA), with the capability to conduct medium-range precision attacks against maritime vessels, even aircraft carriers, in the Western Pacific from mainland China.

The DF-21 is the world’s first ASBM or “aircraft carrier killer” with a range of around 1,800km. With this range and speeds of up to Mach 10, it allows China to pose a threat to large-scale naval vessels, like US Navy carriers, across the Western Pacific.

The DF-21 system has a warhead capable of Mach 10. With speeds of up to Mach 10 during the terminal phase, the DF-21D is the fastest-ever MRBM. It is capable of outperforming current US missile defence systems such as the AEGIS ballistic missile defence system. The theory behind its design is that a missile descending at a speed of Mach 5 or more on a ballistic trajectory at sea level would be extremely difficult to overcome.

The road-mobile ASBM system is mounted on a wheeled transporter erector launcher (TEL) to enhance survivability against enemy counter-attacks. With a range of approximately 1,800km, the DF-21D is a variant of the DF-21 family of two-stage, solid-fueled, single-warhead, conventional or nuclear, MRBM used by the PLA Rocket Force. With probable radar over the horizon, satellite tracking and potentially unmanned aerial vehicles, each providing guidance to a target in open oceans. It also integrates a manoeuvrable warhead, or MaRV, to make it easier to detect the target.

As I mentioned in my previous commentary, China fired two of its most high-performance missiles – a DF-21D ASBM and a DF-26 IRBM – into the South China Sea from bases in mainland China on 26 August 2020. It is highly likely that the DF-21D ASBM was launched from eastern China at Ningbo in Zhejiang province. It is believed that these missiles had hit a mobile at-sea target close to the Paracel Islands. August 2020 was not the first time that China had fired ballistic missiles into the South China Sea. It had fired them in mid-2019, with what are supposed to be DF-21D and/or DF-26 missiles. In 2013, the DF-21D was successfully tested against targets similar to US naval vessels that have proven to be useful as well.

The DF-21 is exceptionally precise and has been called “carrier killer” by military analysts who argue that it was initially designed to hit US aircraft carriers that are believed to be involved in a future conflict with China. As long as the United States does not deploy sufficient capabilities to defend itself against the DF-21D, the strike groups of American aircraft carriers within the range of the missile will be vulnerable.

It seems that China’s objective is to block the US and allied military forces from freely manoeuvring in anti-access / area denial (A2/AD) airspace and in the maritime “bubble” around the Chinese coast, in south and east China Sea. In this context, the DF-21D is essential to the A2/AD zone in the Asia-Pacific region, which is intended to limit US freedom of movement (FoM) by exploitation of US operational vulnerabilities.

Nevertheless, questions arise as to the effectiveness of the missile. It was challenging to make a precise assessment of the weapon’s capability, especially from the point of view of maturity and effectiveness. If they are effective, these missiles provide China with a destructive capacity that no other army would be able to claim.

The DF-21D’s long-range standoff capability gives China greater operational agility on the battlefield whilst reducing a surprise attack risk. As a result, it gives China a substantial operational superiority and enhance deterrence in the region. China will need sophisticated C4ISR architecture to locate, identify, and track adversary naval vessels to feed into its ASBM targeting cycle.

By using long-range precision-guided ballistic missiles such as the DF-21D, China is endangering all American forces operating in the Asia-Pacific region, thereby hindering American military power projection in the area. The U.S. and its regional allies are required to enhance their ballistic missile launch detection and tracking architecture for early warning and concurrently reinforce BMD capability onboard naval vessels operating in the region.

The potential mastery of ASBM technology by China, with the additional possibility of deploying new versions with enhanced range at a future date, would have far-reaching regional implications not only in the Asia-Pacific region but also in the wider India-Pacific theatre.