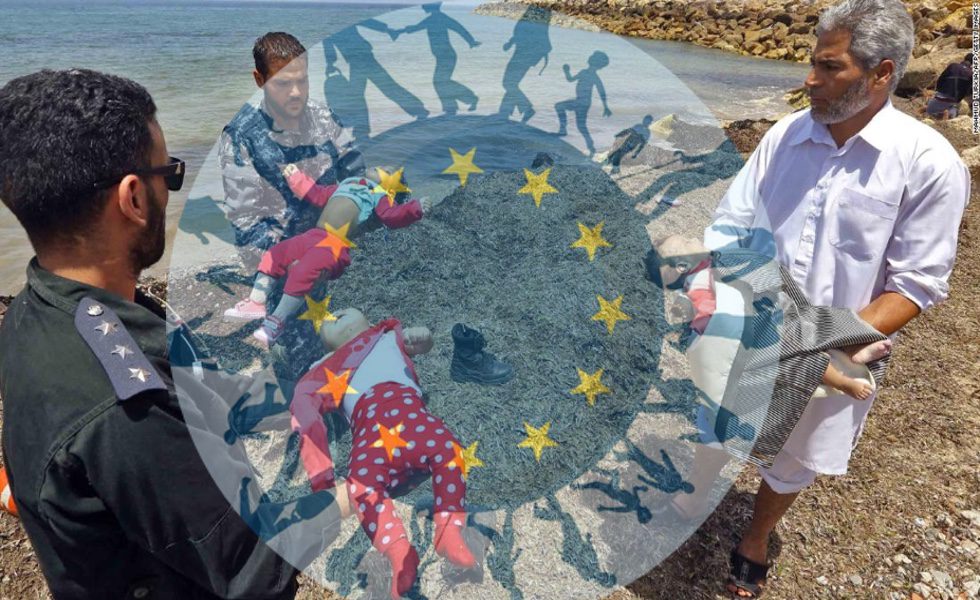 On 29 June 2018, just one day after the announcement of new EU measures to keep migrants out of European borders, lifeless bodies of three babies appeared in the news. The image of their innocent bodies as if they were sleeping in the stretched arms of the men who were carrying them were heartbreaking. According to UNHCR, their overcrowded rubber boat, carrying 123 refugees, capsized while they were trying to reach Europe. Only 16 of the passengers survived who were strong enough to swim more than one hour. They were rescued by the Libyan Coastguard. “This is the hardest day of my life. I couldn’t decide whether I should save myself, my children or my friends,” said one of the survivors. On the same day, another 300 migrants were intercepted in the Mediterranean and diverted back to Tripoli. Numbers of drown migrants are increasing each passing day.

In the last couple of weeks, Italy has been demanding NGO ships not to intervene the rescue operations in the Mediterranean and leave it to EU sponsored (trained, equipped, funded) Libyan Coastguard. During the last migration summit on 28thJune, EU leaders backed the Italian discourse. However, latest incident is proving that leaving everything to Libyans, especially at sea, does not yield positive results. Yet, it even puts migrants’ lives in further danger. Head of Spanish NGO, the Open Arms, said that ships in the region intercepted a radio transmission between Libyan Coastguard and EU officials giving details of a distress boat with more than 100 migrants onboard. But Open Arms received official distress signal 90 minutes later than this conversation, through the Navtex System. However, when they offered help, Rescue Coordination Center in Rome responded that the situation was being dealt with by the Libyan Coastguard, therefore no assistance was needed. Consequently, the Libyan Costguard were not sufficient to search, locate and save the boat and its passengers. Therefore, it’s now fair to assess that if NGO rescue ships weren’t denied from conducting rescue operations in the region, many lives -including those of the three babies- could have been saved this week. This will also be valid in the following weeks during which continued attempts will likely occur to cross the sea. Above all, saving a life at sea, and thereby intervening with a distress ship at sea which cannot be neglected or transferred to 3rd parties[1]. It’s not hard to understand the EU authorities’ motive in leaving the distressed boats to the Libyan Coastguard’s care, mainly because the survivors will be brought to European ports should the NGO boats intervene with the situation and save those people at the sea. However, on the other hand, whether it’s an NGO ship or not, any ship at sea and her captain has the responsibility and obligation by the UNCLOS to respond and provide help to any emergency situation at sea. Any delay in fulfilling this obligation, let it be a coordination effort with the EU authorities whatsoever, will not relieve them from their responsibility in any death at sea provided that they had the means available at the beginning to rescue the distressed vehicles, crew or passengers. Thereby, above picture of three tiny bodies should be sending a strong signal to all civilian and military vessels and crew sailing in the Central Mediterranean nowadays with regards to the responsibility put on their shoulders.

Furthermore, misery of the migrants rescued by the Libyan Coastguard doesn’t end at sea.

They return to Libya where there are another 700 thousand to 1 million migrants according to IOM. According to Libyan authorities, the number of migrants living outside of the official immigration centers even goes up to 1.5 million. It has been claimed that the number of migrants reaching Europe has significantly dropped last year after an Italians-forced deal with a major smuggling group in Libya. However, smugglers are reported to have moved to inland Libya and activated dozens of illegal detention centers where stuck migrants were enslaved and sold in slave markets, tortured, abused, raped or ransomed to extort money from them or their families.

Even in legal detention centers in Libya, conditions are reported to be horrific as UN Human Right Officers reported after their visit to the State Detention Centers last November: “Monitors were shocked by what they witnessed: thousands of emaciated and traumatized men, women and children were piled on top of one another, locked up in hangars with no access to the most necessities, and stripped of their human dignity,”

On 23rd May, more than 100 African refugees tried to escape from the clutches of the smugglers in Beni Walid in Libya. During their escape 15 were killed and 25 were injured by the smugglers, and around 40 -mostly woman- were left behind. Moreover, it was elicitedthat some corrupt Libyan Coastguard officials were working in coordination with the human traffickers. The UN Security Council imposed sanctions to six leading human traffickers including a regional head of the Libyan Coastguard.

As things stand; most of the migrants -who have fled conflict, persecution or extreme poverty from countries like Niger, Mali, Chad, Sudan, Egypt, Libya and other African states- can neither return to their countries nor can they stay in Libya. Therefore, small inflatable boats or dinghies are still their only hope.“We knew it wouldn’t work, but dying at sea was better than living in Libya” said an Eritrean migrant. Her words sum up well the stalemate that the migrants in Libya are in.

Unfortunately, on the northern side of the Mediterranean, things are not going well either. Owing to the lack of consensus on fair burden sharing among European states, earlier sympathy, and hospitality of the people left its place to a rising anti-immigration sentiment across the board.

On 28th June, EU leaders decided to tighten EU’s external borders, to continue funding Turkey and Morocco for preventing migrants leaving for Europe, and to set up new centers in North Africa or Sahel countries to disembark those rescued from the sea. Can this be the policy to solve the stalemate described above? It is probably not for three main reasons: Firstly, these measures are not fit to stem the flow of desperados who prefer dying on the way rather than living in danger. Secondly, it concerns only the ones who were saved from the sea, not those who haven’t even reached the Mediterranean yet. And lastly, aside from lacking a volunteer African state to host these camps, it is not possible to ensure the security and humanitarian conduct in an offshore camp. In addition, this policy makes EU dependent on third party countries.

Apart from the others, there is one decision from the latest EU migration summit that I appraise as the most promising one: EU leaders agreed on increasing development funding and inducing private investment to achieve a socio-economic transformation of Africa, in coordination with Africans and African Union. However, it is too early to celebrate a success, since the amount of the allocated resources, as compared to the other measures, will indicate the importance given to the solution of the core causes of the migration problem.

Overall, we need to see and understand that people in a part of the world are suffering from a great tragedy and in need of a safe heaven. Turning a blind eye to this fact or trying to keep them away from own borders will not eventually help. Besides, trying to stop them at the borders will increase the criminalization of these people which, in the long run, would turn into a further threat to European security.

To achieve an enduring solution to this ongoing crisis, following steps need to be taken with a collective mind and understanding:

As an alarming fact, there is an ongoing deterioration in global peace, as reported by the Global Peace Index. Global conflicts and the number of displaced people is also on the rise. EU leaders’ dedication and success in developing value-based policies to achieve durable solutions for the migration problem will ensure a safe future not only for the EU but also for her continental neighbors.

[1]Article 98 of the 1982 United Nations Convention on the Law of the Sea (UNCLOS) reads as follows: