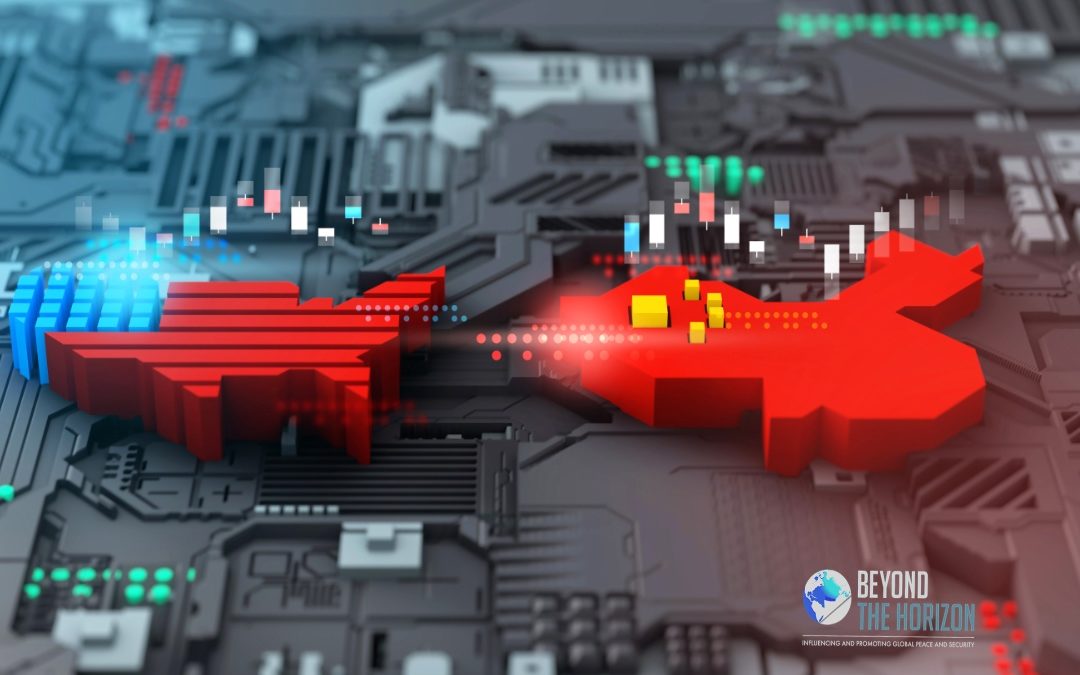 On 14 May 2021, China became the second country to have successfully landed a rover on Mars after its Zhurong spacecraft touched down on the surface of the red planet. Zhurong (祝融), carrying the name of the “god of fire” in ancient Chinese mythology, was the sixth rover to land on Mars, the first five managed by the American NASA Jet Propulsion Laboratory. Although registering as a great success for China, Zhurong received lesser global attention when compared to its American competitor, Perseverance.  Yet, it heralds once again that China constantly gains more ground against competing with the U.S. even in cutting-edge technology alongside other sectors.

China is undisputedly becoming a technological superpower and is currently undergoing the fastest expansion in world history despite the recent pandemic crisis. One of the reasons behind the phenomenon is that innovation is at the top of the country’s priority list.

In the year 2017, Chinese President Xi Jinping set out clearly his vision at the 19th CPC National Congress for China to achieve global leadership in science and innovation by 2050. The government has been leading the way for years, and the country’s high-tech sectors are developing at a rapid pace. At the congress, President Xi envisioned China to become one of the world’s most innovative countries by 2020 and a leading global science and technology power by 2049. Surely, how much of those goals China can be achieved in prescribed time is a matter of debate. But in accordance with these objectives, it is evident that China prioritizes innovation in key generic technologies, cutting-edge frontier technologies, modern engineering technologies, and disruptive technologies.

In the terms of Sino-American relationship, the rigorous competition between two major powers has already expanded to numerous fields, from trade to the protection of cutting-edge technologies and the formation of regional strategies. Their development models are supported by different values and norms. The increased intertwining of geopolitics and technology reflects the underlying intensification of competition between China and the United States and exacerbates the direct competition between the two powers for control over the rules, norms, and institutions which will govern international relations of the new world order in the coming decades, including high-technological developments like artificial intelligence and 5G.

The political leaders of both countries are well aware that technological innovation is a strong source of national power. As a result, technology is now largely politicized and has become a more prominent element of great power rivalry.

There is no doubt that the U.S. is the technological superpower in the world. But China is trying hard to seize this title from it. It has grown very rapidly over the development and application of the critical high tech areas such as artificial intelligence, big data, robotics and 5G and likes and there are concerns about whether China would evolve into a new hegemonic superpower based on superiority in high-tech.

To better understand how China realized constant developmental and economic achievements since 1992 and through what means it managed that, we must first take a glance at the historical background of China’s technological progress. And to predict the future of the fierce competition between China and the U.S., we must also analyse China’s vision and aims over cutting edge technology and closely scrutinize the mutual movements of the powers.

The death of Mao Zedong in 1976 was a turning point for China. After Deng Xiaoping took the leadership of the CPC in the year of 1978, the Chinese government began to pursue “the policy of reform and opening-up”, whereby it adopted a stance to achieve economic growth through the active introduction of foreign capital and technology while maintaining its commitment to socialism. So, China began its transition to a market economy and opening up to the rest of the world in the late 1970s.

The pace of reform accelerated in the 1980s and 1990s. Among other developments, China increased the number of special economic zones. It became increasingly receptive to foreign direct investment and decided to join the World Trade Organization in 2001. Since then, the transition to a market economy has accelerated with the growing recognition of private property rights and the rapid involvement in the global trading system. China is today a major global actor on the world trade and investment scene. The speed, scope and scale of its integration into the global system are unprecedented in economic history. It has been growing at 8-10% per year since the late 1970s and today has become the largest exporter of goods globally. It has earned a reputation as the global manufacturing center.

After 1978, particularly after acceding to the World Trade Organization in 2001, China benefited from economic entanglement with other countries, especially the United States, building and strengthening its economic foundation and acquiring new technologies while developing its high-tech sectors. In consequence, based on policy changes coming in different waves since the death of Zedong, China has become a story of success for economic transformation and has become one of the global technology powerhouses, being the origin for some of the high-tech brands such as Huawei.

In the 21st century, China, as a large developing country, makes constant effort to accelerate its science and technology development and close the gap with the developed country. To realize that, so far, China determines and adapts regularly its national plans and aims.

For instance, in January 2006, China launched a 15-year “Medium- and Long-Term Plan for Development of Science and Technology“. The plan calls for China to become an “innovation-oriented society” by 2020 and a world leader in science and technology by 2050. It commits China to develop “indigenous innovation” capabilities and to become a leader in new science-based industries by the end of the plan period. China’s Medium- and Long-Term Plan has defined, for the first time, the goal of independent innovation in science and technology.

As for the year 2015, the Chinese government released a “Made in China 2025 strategic plan” to reduce China’s dependence on foreign technology and promote Chinese high-tech manufacturers in the global market. This is another example of China’s recent national plans over science and technology.

MIC 2025 is a comprehensive 10-year plan to transform China into a leader in advanced manufacturing. Promoting local innovation, national brands, safe and auditable standards, and localization of production and data seem to be central elements of the plan.

The plan also targets the country’s transformation from a producer of low-end goods to a leader in high-tech by strengthening its industrial capacity while minimizing its dependence on foreign technology. With much more explicit goals, MIC 2025 implements more favourable policies and intensively distributes more resources to targeted industries and sectors.

The last of such initiatives, namely “China Standards 2035 Plan“, consists of a two-year project that started at the beginning of 2018. The plan is expected to establish a guideline for the Chinese government and leading technology companies to set global standards for emerging technologies such as 5G technology, internet of things (IoT) and artificial intelligence, among other areas. It will work in concert with China’s other industrial policies, particularly with MIC 2025 plan.

While looking at all plans and projects mentioned above, it is clear that China manoeuvres to accelerate its science and technology development and for itself to reshape the global technology industry landscape of the future.

China and the U.S.: Competition on Tech-Supremacy

The key area of the issue stands on the clash of two superpowers having desire to be new hegemony of the coming decades. China’s policies and ambitions increasingly conflict with U.S. interests and threaten the playing role of the U.S. in the world. As the interests of the U.S. and China are fundamentally competitive and incompatible, the new world order in which China wants to have central role would be fundamentally incompatible with the U.S.-led liberal international system. Therefore, China and the U.S. will strengthen definitely their respective competitive advantages while weakening those of their adversaries.

The political leaders of both sides profoundly recognize that technological innovation is a potent source of national power. At the 19th CPC Congress, President Xi expressed that innovation was the main driver of the country’s development. On the other side, the White House always attaches importance to the development of advanced manufacturing and the establishment of a national manufacturing innovation network to ensure that the next industrial revolution originates in the U.S.

The U.S. concerns about a probable Chinese leadership in innovation and developing high-tech products become more substantiated each day. To tackle this challenge, the White House has increasingly targeted the Chinese technology industry over both security concerns and trade agreements, particularly after Trump took office. Under the Trump administration, the policy against China’s rapid rise in the high-tech sector consisted mainly of decoupling from it, particularly by uprooting its major high-tech supply chains. In this regard, in 2019, the US Commerce Department banned U.S. companies from selling any products to Chinese telecommunications company Huawei that has been fighting to establish a dominant position in 5G. This move of the U.S. clearly makes “the tech war” visible between the two powers.

Another radical move of the U.S. in the tech war occurred after previous Secretary of State Pompeo made a speech in Silicon Valley. He called on US tech corporations to distance themselves from any business in China that might strengthen China’s military, “tighten the regime’s grip of repression”, or help to “power a truly Orwellian surveillance state”.

As for the new White House administration, Biden keeps still Trump-era sanctions in the tech war with China by calling on the allies of the U.S. for supporting its policy. But unlike the Trump administration, the Biden administration’s approach to China and technology is focused on “multilateralism”, which basically means widening the front against China by adding allies to the efforts it leads.

It is arguable that the tech war between the two superpowers that took a severe turn in the Trump era continues on the same plane but with different policies and methods.

China’s technology sector has grown so rapidly in the last two decades that it is pushing the United States out of its long-held position at the top of some sectors. The recent event, the landing of the Chinese rover Zhurong on Mars is a clear sign of China’s rapid expansion in the race for technological hegemony. On the other side, there are also areas where the U.S. is currently behind China, such as the development of 5G.

Both powers draw attentively their own guidelines over science and technology while having concerns about one another. Thus, China and the U.S. take measures and make aggressive moves for weakening the power of one another even if they are in collaboration in some sectors. But the policies against China that the U.S. has implemented such as “decoupling” might only reinforce China’s ambition of attaining technological independence.

In this sense, it is blindingly obvious that technology has many implications that extend beyond the domain. Thanks to the significant role technology play in overall economic development, realpolitik and that it is one core component of national power, China and the U.S. will inevitably engage more in a race for technological development to pursue future global dominance.

All in all, the contest between China and the U.S. over who will shape the new world order and write up its rules and norms will certainly heaten up in the coming years let alone decades. Who will have the lead, is yet to be answered by time?

Yunus Erbas is a Research Intern at Beyond the Horizon ISSG