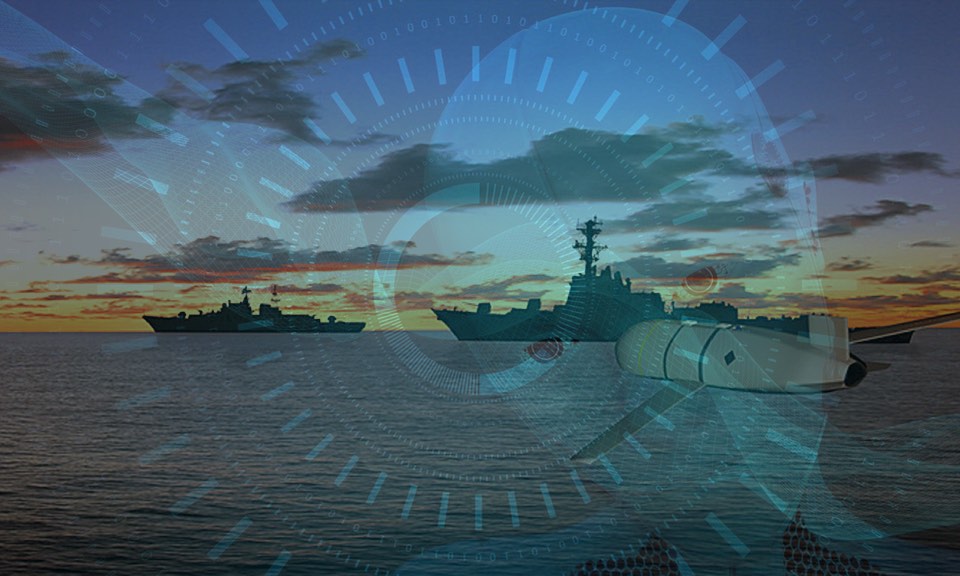 Guided missiles are still one of the most strategic, destructive and powerful weapons for the above water warfare. For decades, scientists and engineers try to develop most skilful missile in order to catch the target from the weakest point. When one produced a sophisticated missile, the other one tried to develop antidote, which is called anti-ship missile defense (ASMD) systems.

ASMD is a quite complicated process. It has lots of instruments, and all the instruments should work coherently. A successful ASMD needs, developed sensors which can detect the missile (via Electronic warfare systems, close in defense purposed radars etc.), softkill countermeasures (like CHAFFs, decoys etc.), hardkill countermeasures (missiles, guns, close-in weapon systems (CIWS)), manoeuvre abilities of the ship and of course the well-educated crew who can perform these measures perfectly.

Crew is needed to be so fast and they don’t have any chance to do wrong. Because when a missile’s trace is detected either at radar scope or at electronic support device, you have maximum 1-2 minutes to be ready to perform countermeasures. While on a battle or a high-stress environment, ships probably would be at alert mode because there would be a missile threat and requires high readiness. At this situation ship has a chance to survive. But the ship’s most vulnerable moment is at low-stressed moments. If an unexpected missile is detected (mostly terrorist attacks) and the ship wouldn’t be ready in time, it wouldn’t be easy to get rid of the missile.

In order to avoid ship to be caught vulnerable against missiles, there are some systems at warships, some of them called like threat response systems, some of them called WASA (weapon assignment and sensor allocation). These systems work through similar logic. The operator inserts the parameters of threat, for example, inclination angle, altitude or speed of contact, and when the system detects contact that is coherent with parameters, diagnoses the contact as hostile, tracks and engages target it by itself. For example, the Aegis air and missile defense system of the U.S. Navy warships recommends which targets to shoot down with which weapons, and if the human operators are overwhelmed, they can put Aegis on automatic and let it fire the interceptors itself.

But, what happens if the missile comes with an unexpected parameter? In such situations auto-response systems wouldn’t be enough, because there should be a decision-maker, either human or machine.

What is Artificial Intelligence (AI) and Machine Learning (ML)?

We hear about Artificial Intelligence almost every field of life, but when we ask what it means, most people could poorly describe it. To describe AI in the simplest way, it refers to the simulation of human intelligence in machines that are programmed to think like humans and mimic their actions. AI coders develop such programs that help the machine to earn human manners, and when it encounters something and experience it once, it learns and produces best solutions for the issue at next time, which is called “machine learning”.

How would AI support commanders?

The adaptation process of AI to armed forces is still in progress. We still didn’t see a consensus on how it will affect the art of war, of course it will be quite useful for commanders while at the scene, but there are still some concerns. Because war scene is quite risky, if a defect occurs during battle you don’t have “load game” option, no second chance. So, planners want to be satisfyingly sure.

While talking about the international law issues which could be violated by AI machines in order to produce best solution in an unlawful way, “I’m not talking about killer robots,” said Prof. Andrew Hill, the U.S. War College’s first-ever chair of strategic leadership and one of the conference’s lead organizers, at the opening session. The Pentagon wants AI to assist human combatants, not replace them. The issue is what happens once humans start taking military advice — or even orders — from machines.

This is a reasonable explanation, of course, AI could neutralize human-based mistakes, could produce the most useful solutions in order to help commanders to give best decisions to win the battle.

This is a reasonable explanation, of course, AI could neutralize human-based mistakes, could produce the most useful solutions in order to help commanders to give best decisions to win the battle.

Would AI be useful in missile defense?

Though AI has not adapted the decision mechanisms at the battle scene completely yet, it could be useful at some parts of the battlefield, such as ASMD. At previous paragraphs, we stated about auto-response systems. There are important differences between auto-response systems (just like Aegis) and AI systems. Aegis isn’t artificial intelligence. It rigidly executes pre-written algorithms, without machine learning’s ability to improve itself. But it is a long-standing example of the kind of complex automation that is going to become more common as technology improves. AI is quite different. After designing the system, the machine learns what to do in its way and produces its own solution without inserting parameters.

What happens if you let the computer to pull the trigger?

– A well-developed and skilful AI computer can be ready to fight against guided-missile 24 hours a day. It doesn’t need rest and take nourishment, it’s on the watch every time.

– Without any input, it can communicate with sensors every time, never lets for latencies after detecting the threat. As we mentioned at the beginning of the article, ASMD is such a complicated process that needs not only skilful sensors but also very well-educated crew. After detecting threat, reporting issues etc. could cause lethal latencies.

– If AI takes control, it decides the best action in milliseconds and starts the countermeasures in seconds, hardkill, softkill and manoeuvre together.

– While producing a solution, AI could detect faults of current systems while facing once and could give advice for remedy just after threat is defeated.

– AI-based designed squadrons could communicate with each other by blockchain technology (a public ledger of information collected through a network that sits on top of the internet) and could keep high readiness in order to help units to protect high value unit at stressed areas. Blockchains current pace is not enough for ASMD, but it’s expected to be improved in the near future.

We can write dozens of benefits of AI while defending our ship against missiles. The most important issue, maybe it could be taken as a warning, AI should be under human control. Human shouldn’t interrupt the process but they must observe. Because AI cannot learn how to sacrifice or saving civilian people etc. It only aims to protect the ship against missile and solution could contain unlawful issues while fighting against aircraft or missiles. For example, if missile launching aircraft would be shadowed by a civilian plane which carries passengers, AI could make a solution to kill them both. This is against international law. So, human-observed AI would be perfect for missile defense.

Of course, there are very skilful and sophisticated guided missiles around the world. But none of them is as smart as chess-legend Gary Kasparov. If AI system could beat such chess-legend, breaking and destroying missiles would be a child-play for AI.

* Maritime Security Analyst at Beyond the Horizon ISSG