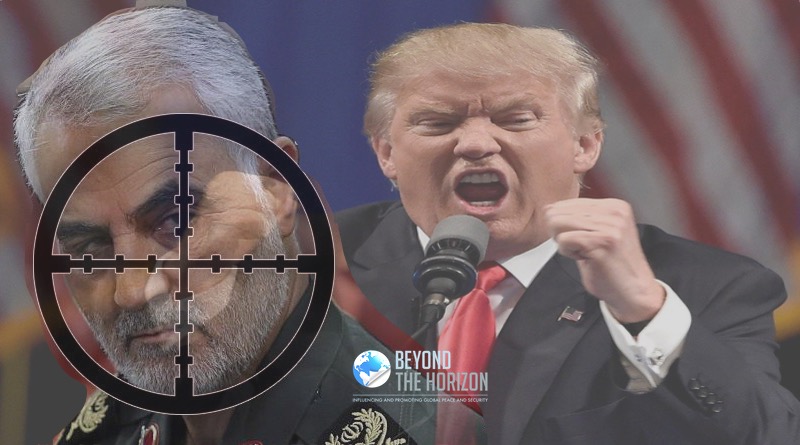 A qaytusha attack killed one US contractor on an Iraqi base in Kirkuk on 27 December. To reciprocate, the US bombed three sites in Iraq and Syria belonging of Kataib Hezbollah, a designated terrorist group which US holds responsible. As retaliation to this US action on Iraqi soil, crowds commanded by Popular Mobilization Forces (PMF) laid siege around US Embassy in Baghdad for two days which ended on January 1. Important political figures made appearance in support of protestors to include Falih Alfayyadh, former Head National Security Council, Hadi Al-amri, Abu Mahdi al-Muhandis and Qais al-Khazali.

Finally, on 3 January (Friday) at 01:45 am, a US MQ-9 Reaper drone attacked a convoy leaving Baghdad International Airport. Qassim Soleimani, the head of Quds Force of the Islamic Revolutionary Guards Corps,  Abu Mahdi al-Muhandis, the Deputy Chief of PMF who also commanded Kataib Hezbollah and  Mohammed  Aljabri, the PMF public relations chief were three most prominent figures killed in the attack. Soleimani was deemed as the most dangerous Iranian official. He was despised by many and respected at the same time. Al-Muhandis was also deemed as the most dangerous man in Iraq and regarded as the real PM behind the scene. Al-Muhandis escorted by Aljabri had come to airport to pick up his close friend and confidant Soleimani.

Reports hint Pentagon officials showing military response options to the President did not expect the latter go for the most radical one, assasination of Soleimani. Because, Soleimani was the highest military and intelligence official of Iran managing the state’s power projecting efforts. When considered with the recent escalation of tensions between the two countries, President Trump’s decision would certainly have significant consequences. As can be guessed, Iranian leadership convened to decide retaliation. So this brings us to the question of “what implications this attack will have for the sides and the region?”

1. The escalation of the tensions between the US and Iran has been showing itself through proxies. The use of Houthis to settle scores against KSA or use of PMF within Iraq are examples to this policy or rule of “No direct confrontation”. In this case, Iranian retaliation to the latest attacks should not be expected in the form of direct attack. Iran will likely choose a means that will not be directly attributable to itself. In other words Iran will certainly want to take vengeance by harming US interests, troops, assets or allies across the region or the globe but we will not have smoking gun evidence.

2. Iran has a constant tendency to increase number of cyber attacks against US firms and assets in times of crisis due to non-attributable nature of this option. To retaliate, Iran will likely utilize this option too. It should not surprise us if Russian, Chinese or other autocratic regimes’ assets join the initiative to settle scores against US.

3. It is true that the tension is sprialling between the US and Iran and this attack is a milestone. But, still a direct confrontation between the two states is quite unlikely. Iran is an extremely rational state as opposed to general claims and US has no interest in a new fight in the Middle East. Nor do its allies. So, if we leave overtones in the tweets and statements of both sides, kinetically what we will observe will be likely use of limited force for punishing the adversary. However, it is not hard to fathom non-military options will be used to the maximum especially by Iran. Trump has also changed the most relevant internal agenda item from impeachment to Iran.

4. Iran has lowered level of commitment to JCPOA or “nuclear deal” as widely known since US withdrew. It was supposed to further bring down this level of commitment in implementation. The new development has given the country perfect pretext. Latest Iranian statements indicate this lowering to be in line with para 36 of the JCPOA and that the country will continue work with IAEA. This can be read as an attempt to isolate US. As UK, Germany and France made statements in support of US, Iran may intend to diminish negative effects and further adoption of same stance EU-wide.

5. Iran and US are two states that have had important sway in Iraqi politics. The country has been scene to severe rivalry of the both states and from time to time it is caught in the midst of the two. In this case, an Iranian was killed by US forces on Iraqi soil. This act will upend political balance in Iraq ahead of formation of a government.

To refresh memories, the current caretaker PM Adel Abdel Mahdi had to resign in November after some 500 people were killed by goverment security forces in protests that started on October 1 over Iran’s influence in the country.

After US attack in Baghdad Airport, Abdel Mahdi denounced the act and labelled it as “massive breach of sovereignty.” He also called an emergency parliamentary session to “take the appropriate legislative measures in a manner that preserves the dignity, security and sovereignty of Iraq.”

It was the same PM Abdel Mahdi that had blocked a parliamentary vote to demand US withdrawal back in February 2019 when President Trump stated US troops were stationed in Iraq to monitor Iran.  Based on several reasons that will be detailed hereafter Mahdi has taken a strong stance against US in this case.

Fast forward to yesterday (5 January) Iraqi parliament called on the government through a resolution that read: “The government commits to revoke its request for assistance from the international coalition fighting Islamic State due to the end of military operations in Iraq and the achievement of victory,”  and “The Iraqi government must work to end the presence of any foreign troops on Iraqi soil and prohibit them from using its land, airspace or water for any reason.”

Mahdi spoke in favor of total withdrawal of all foreign troops during the session. First of all, his weak position as caretaker and the strong anti-US sentiment dominating political climate does not allow him otherwise. But at the same time, the theatrical parliamentary meeting where himself and other political figures would express their feelings / thoughts would give a message to international community without having any legal consequences.

To be more precise, the decisions taken yesterday in Iraqi parliament does not directly translate into withdrawal of US and foreign troops from Iraq due to non-binding nature of parliamentary resolutions. But it is still important in that it reflects the political climate that will have determinant power in the voting for selecting next PM that has to be made now. Selection of the PM has not taken place since November due to the fact that people refuse their candidates and also there is no consensus in Parliament itself. But in the great picture it is not hard to see that selection of a figure close to US is an extremely low probability from now on.

The next steps should Iraq opts to do so will be proposal of a draft law by the President or PM, its enactment and one year notice for withdrawal. %45 of the parliament mainly comprised of Sunnites, Kurds and some Shi’ite elements did not attend parliamentary session. So, there is not a unanimous agreement on the withdrawal of US troops.

But in case it happens, Trump already stated readiness to impose sanctions on Iraq and threatened Baghdad would have to pay the cost of an air base there.

6. NATO Mission Iraq (NMI) was launched in October 2018 as a non-combat training and capacity building misson to strengthen Iraqi security forces and Iraqi military education institutions. The events that will result in withdrawal of US forces will certainly result in the same finality for NATO mission too. To verify this premise, acting NATO spokesman Dylan White had said earlier in a statement NATO suspended training of Iraqi forces to ensure the safety of several hundred mission members amid fears for regional stability after a U.S. air strike in Baghdad. He said: “NATO’s mission is continuing, but training activities are temporarily suspended.” Iraqi parliament decision to end presence of foreign troops does not mention trainers. So technically NMI has potential to continue through trainers. However, if US is to pull its troops, NATO will not likely decide to stay. Still to be seen what NATO decides on that.  At the time of writing this article NATO is in an urgent meeting to decide on how to proceed.

7. So, with latest attack, the US can be said to have presented Iraq to Iran in a golden plate. As Kadhim puts it the event has galvanized Shi’ite armed groups and we will probably see more activism on their behalf as in pre-2012 period. If they cannot get what they want politically they will resort to forcible means.

8. At the end of the day, if Iran had to bring its brightest brains to make up a plan to deny Iraq to US and increase its influence in the country it could not have achieved what President Trump did. Iranian proxies dotting across Levant are now energized and will have more influence in the region.

9. Ironically the US action has resulted in an Iraqi reaction which may help Trump fulfill his promise to bring US soldiers fighting others’ wars back to home.

10. The event is a litmus test for NATO too. The organization has to show a solid posture towards outside. However this US unilateral action will have repercussion for the Allies and there will be internal debates how an action with probable effect on the whole alliance can be initiated without consultation.

11. So a lesson to take; the days of inaccountability for even US are over. The series of events that started with invasion of Iraq under false pretexts, disassemblling its state and armed forces under de-baathification program without proper calculation of repercussions that included complete chaos and years of civil war and finally not respecting Iraqi sovereignty rights have brought the country to this day. I hope next steps are well calculated.

*Onur Sultan is a research fellow at Beyond the Horizon International Security Studies Group.