Analysis of Academic Studies on the Integration of Displaced Persons 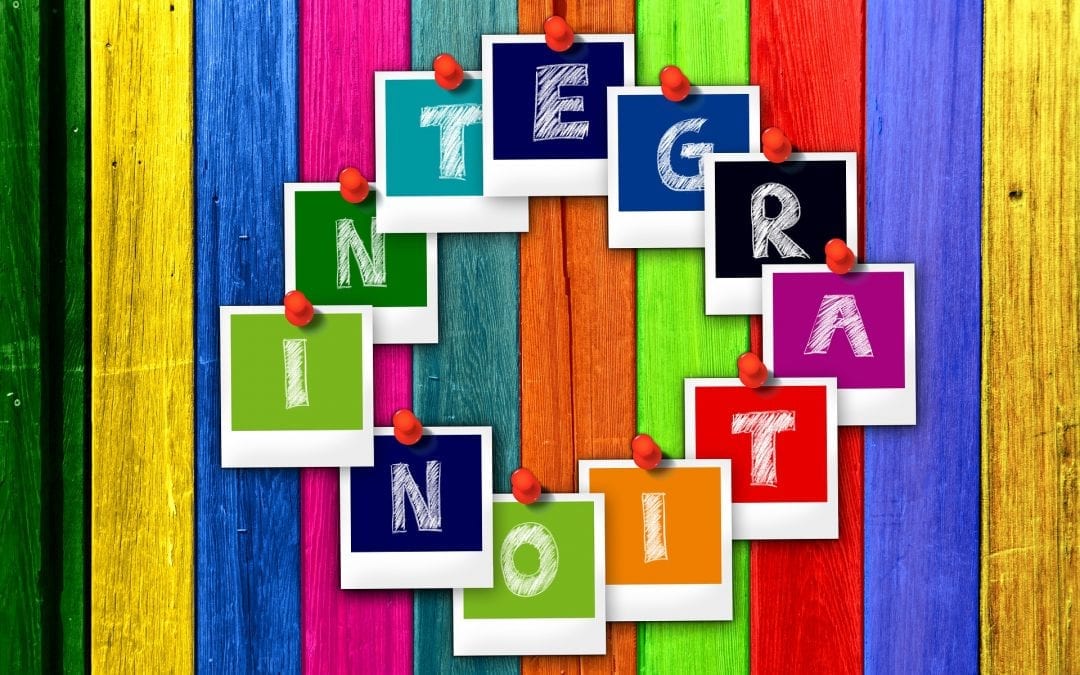 This research analyzed the literature on integration, assimilation, and other concepts[1] related to displaced persons[2] and refugees as experienced in their host countries. The author conducted a computer-assisted content analysis of related articles appearing in the Social Sciences Citation Index, Arts and Humanities Citation Index, Science Citation Index – Expanded, and Emerging Sources Citation Index and published from January of 1998 to September of 2018. The results of this research revealed that sociological articles comprised 11% of the academic studies (298 of 2,673). The results indicate that academic work regarding the integration of displaced persons encompasses many different concepts, dimensions, and approaches in a diverse collection of countries. Currently, there is no commonly held view of the meaning of integration or other related concepts. The current body of research focuses primarily on organizational and structural topics like housing, health, education, the labor force, identity, and language, instead of human-based topics such as social capital, community participation, and networks of displaced persons that recognize them as public actors (49 of 298 sociological articles). Integration studies of displaced persons almost doubled in number after 2015, the time of the most recent migrant crisis. This review argues that a common conceptual and theoretical framework needs to be put forward that expands the current body of research on human-based topics.

In the last two decades, the world has witnessed the greatest migration of displaced persons since the Second World War; the majority of displaced persons are from Asia and Africa. As of 2017, 64% of international migrants resided in high-income countries, primarily in the West (United Nations, 2017). Many nations have been affected by these recent changes, due to an influx at their borders and their efforts to meet their responsibilities under the 1967 UN Refugee Convention and its protocols. Political developments in this area have been followed by increased security and humanitarian concerns. As a result, the migrant crisis has become a top national priority, in recent years running in parallel with an increasing academic interest. While there is a relatively institutional understanding of migration in the Western world (Achiume, 2016), the conceptual consensus on terms like “integration” and “displaced persons” has yet to be properly structured (Korac, 2003).

The purpose of the study is to examine the most prestigious academic indexes for articles addressing the integration of displaced persons into host countries, in order to illustrate any conceptual confusion and identify common research perspectives and less-examined areas of analysis. This work focuses on the Thomson Reuters Web of Knowledge (WoK), Social Sciences Citation Index (SSCI), Arts and Humanities Citation Index (A&HCI), Science Citation Index – Expanded (SCI-EXPANDED), and Emerging Sources Citation Index (ESCI). After identifying the general body of academic studies, the author analyzed the content of the main sociological articles published in the last 20 years, including a content analysis of 257 articles published in English and abstract and/or key word analysis of 41 pieces published in other languages. Sociology was the most common academic discipline generating studies on the integration of displaced persons, followed by works considering demographics.

Scholars have used many different terms to describe the settlement and reception process of displaced persons. Besides academics’ personal reasons for preferring certain terms, policy variances in specific countries have an effect on this multiplicity of concepts. Some research has stressed possible conceptual and practical reasons for this complexity and the resulting ambiguity (Korac, 2003). Most work has used integration (R. Alba, Sloan, & Sperling, 2011; Dribe & Lundh, 2008; Korac, 2003; Korteweg & Yurdakul, 2009; Van Oudenhoven & Eisses, 1998) and assimilation (R. D. Alba, Logan, Stults, Marzan, & Zhang, 1999; Harker, 2001; Safi, 2010; Stodolska, 1998; Waters & Jimenez, 2005) as substitute terms. Webster’s definition of “integrate” is “to form, coordinate, or blend into a functioning or unified whole, to unite with something else, to incorporate into a larger unit, and to end the segregation of and bring into equal membership in society or an organization” (Integrate, 2005). The “equal membership” element of this definition represents the mutual shares held by guests and hosts, though in practice the term differs among European countries. Webster’s defines “assimilate” as “to absorb into the cultural tradition of a population or group” (Assimilate, 2005). This term is predominantly used in American contexts and measured according to “socioeconomic status, spatial concentration, loss of mother tongue, and inter-marriage” (Waters & Jimenez, 2005). The notion of equal opportunity and American immigration practices may have an effect on the common use of the term in American contexts. The term “segmented assimilation” refers to post-1965 America. It differs from classical assimilation, which locates displaced persons’ success in their “assimilate[ion] [in]to mainstream culture” (St-Hilaire, 2002).

Acculturation is often tied to political conquest or expansion, and is applied to the process of change in beliefs or traditional practices that occurs when the cultural system of one group displaces that of another. Assimilation refers to the process through which individuals and groups of differing heritages acquire the basic habits, attitudes, and mode of life of an embracing culture. (Acculturation, 2005).

The author accessed the WoK, SSCI, A&HCI, SCI-EXPANDED, and ESCI databases through an American research university in July and August of 2018, and via the advanced search option, examined the academic studies most related to displaced persons’ experiences in their host countries. Migrant, immigrant, and refugee were the base search terms used. Concepts such as integration, assimilation, acculturation, adaptation, adjustment, segmented assimilation, transnationalism, orientation, multiculturalism, and enculturation were employed to identify positive points in the literature, while discrimination, segregation, and isolation were searched to unearth the negative. The vocabulary groups consisted of combinations of integration and displaced person-related terms in the study titles (e.g., integration migrant, acculturation refugee, etc.). The date range was limited to January 1998 through September 2018. After a general evaluation of the academic studies, the field of sociology was selected so that the current research would have a consistent focus. The 298 articles constituting the basis of this research were classified according to the language of publication. While the 257 articles written in English were subjected to a complete content analysis, the 41 written in other languages were analyzed from their English-language abstracts. Finally, the research question was classified, analyzed, and visualized.

A total of 2,673 academic works published between January 1998 and September 2018 were found in the SSCI, A&HCI, SCI-EXPANDED, and ESCI databases. These articles constituted 80% of the greater body of academic studies. Book reviews and conference abstracts followed (see Table 1). When the articles were examined according to research category, sociology and demography were the first two subjects and very close in number. These two research categories comprised 28% of the greater body of publications (see Table 2). More than 90% were written in English. 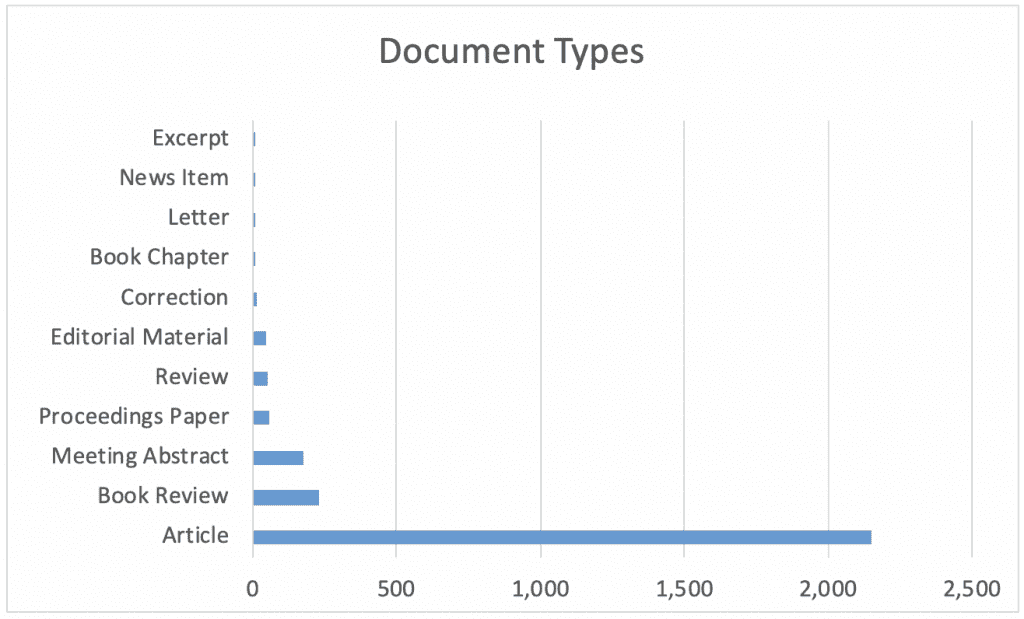 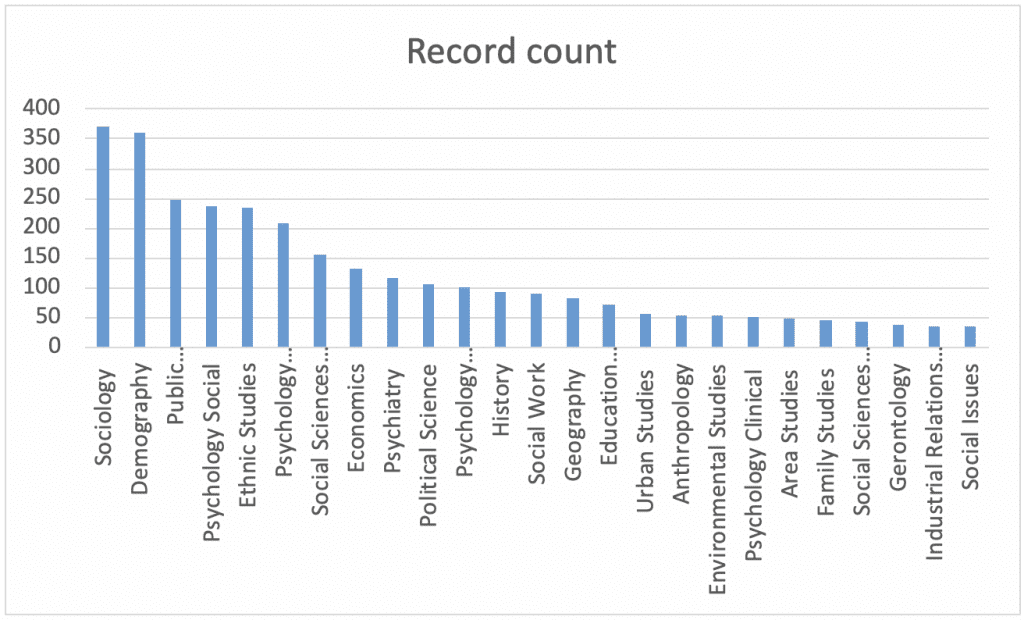 Academic articles on the integration of displaced persons that were published in the field of sociology – the focal point of the current research – accounted for 11% of the total number of academic studies and 14% of all articles (298 of 2,149). When the studies were classified by language, it was found that 83% were written in English (see Table 3). 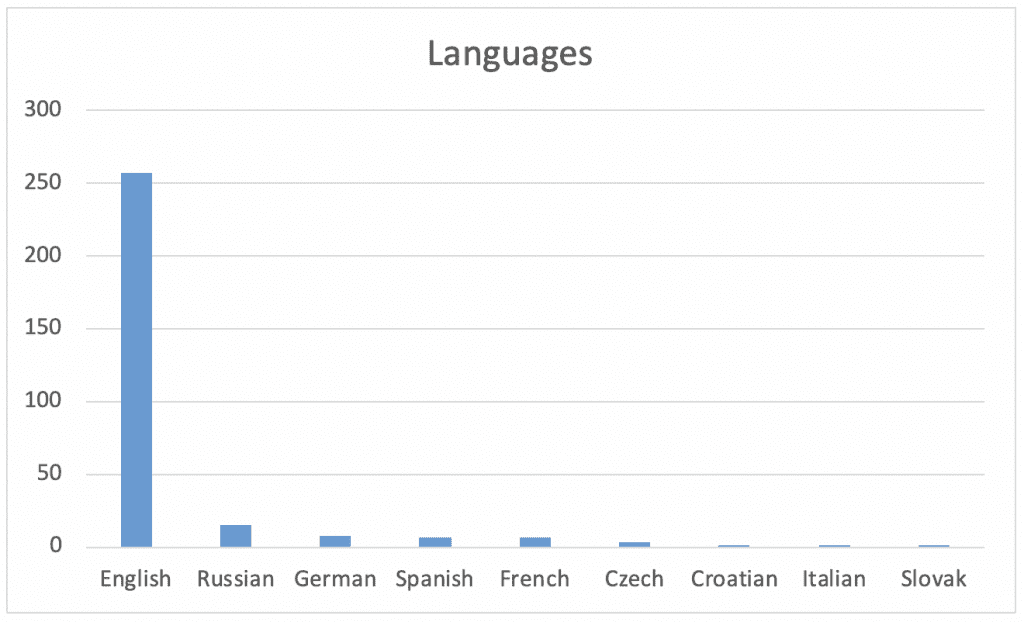 The annual distribution of academic articles published from 1998 to 2005 did not exceed 50; there were between 50 and 100 published from 2005 to 2009 and 100 to 150 from 2009 through 2014. From 2015 through September of 2018, the number of articles published was approximately 200. It is possible that more than 200 articles will be published in this date range; more are likely to appear in the four months of 2018 following the creation of the trend graph. A harmony was found between change per year and increase in the number of displaced persons worldwide (see Tables 4a and b). 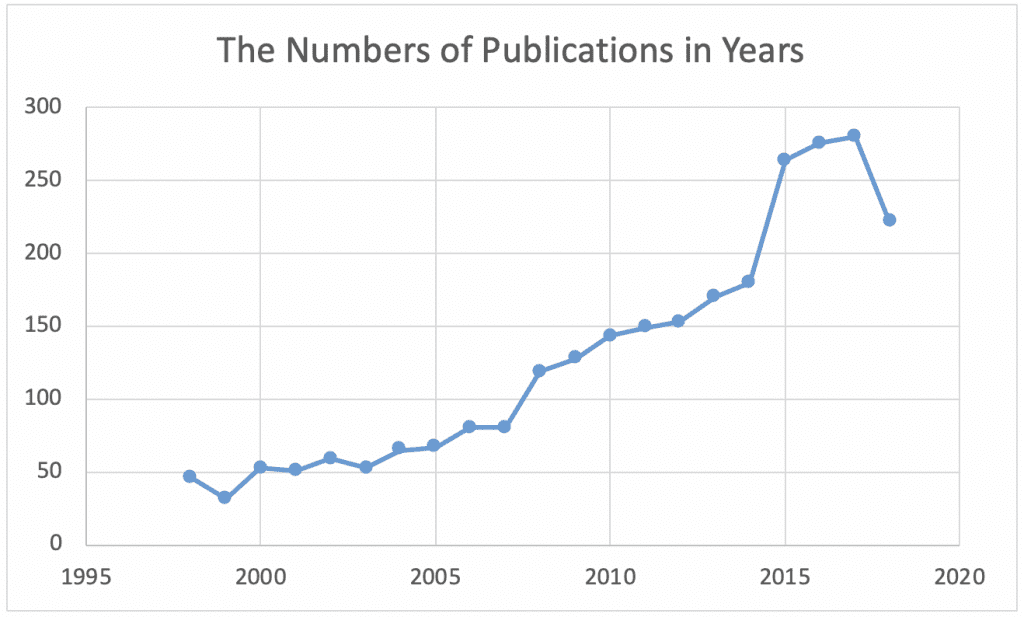 Table 4a. Publications by year 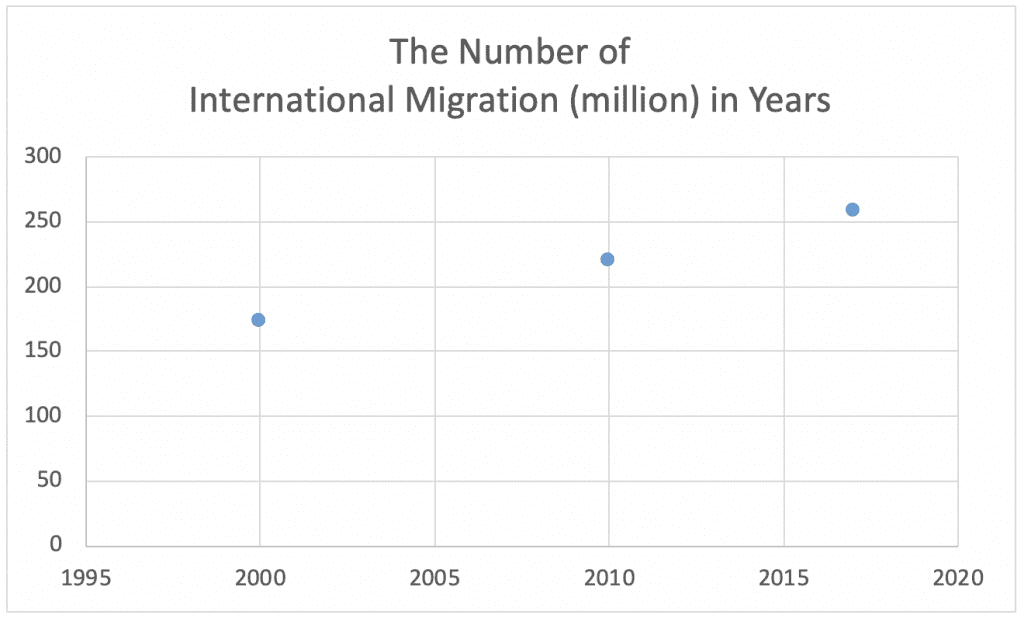 Table 4b. International migration (in millions)

The sociological studies concentrated more on tangible topics (64%) such as housing, health, education, labor, identity, and language. Human-based topics made up a smaller group (16%) and addressed issues such as social capital, community participation, and shared networks.

Most studies focused on tangible and measurable material issues. A likely reason for this is that the data can be easily obtained. These studies dealt with issues from a single point of view, either that of the displaced group or residents of the host country. The focus was mainly on immigrants’ basic needs, such as housing, health care, participation in the labor force, language acquisition, and education, as provided through the reception and settlement process. Information about how many people became employed; received social services such as education, health care, and housing; and learned the local language is easily accessed from aid institutions, and therefore it is a simple process to measure such issues and assess them scientifically.

Another significant topic was migrant identity. In particular, ethnic issues such as gender, age, and a sense of belonging were examined. Researchers appeared to attribute immigrants/refugees a common identity and not consider them individual human beings. A common approach was to assess the impacts and consequences of policies applied to a particular group in a given host country. There were two main forms of integration policy: (1) pluralistic, multicultural, flexible, and soft; and (2) rigid and assimilation-based. A common finding was that sufficient success was not being achieved; displaced people were not fully able to participate in society and instead tended to be isolated in their own neighborhoods.

Conversely, there were several studies that considered immigrants to be social actors and examined their relationships, social networks, and community participation in the host country; these comprised 49 of the 298 articles and 16% of the total number of studies. After Putman developed and conceptualized social capital theory, research in that field increased. Instead of a one-way approach, these studies adopted a bilateral method that included both residents of the host country and displaced people. Such articles emphasized intangible issues such as trust, respect, and equality between migrants and residents, rather than material issues such as health, housing, language, and education. The relationships, social networks, and community participation of migrants and residents were the most common measurement parameters. Of the total, 27% of the studies (81 articles) could be categorized as social psychology. This illustrates that the human-based approach to integration is not sufficient, but is improving.

There are many different approaches to and policies regarding the integration of displaced people. The complexity and ambiguity of the topic are not only conceptual but also practical. There is no common method for or notion of integration. Tangible and emotional issues should be examined together when developing integration policies. Future studies should endeavor to provide conceptual unity and examine the material and moral issues as a unified whole.

Bernard, J. (2006). The social integration of migrants from cities to villages in the Czech Republic and in Austria. Sociologicky Casopis-Czech Sociological Review, 42(4), 741-760.

Van Oudenhoven, J. P., & Eisses, A. M. (1998). Integration and assimilation of Moroccan immigrants in Israel and the Netherlands. International Journal of Intercultural Relations, 22(3), 293-307.

*Cihan Aydiner is a PhD Candidate in Sociology at Louisiana State University and non-resident research fellow at Beyond the Horizon ISSG. ↑