A year has passed since Khalifa Haftar’s attack on the Libyan capital, Tripoli 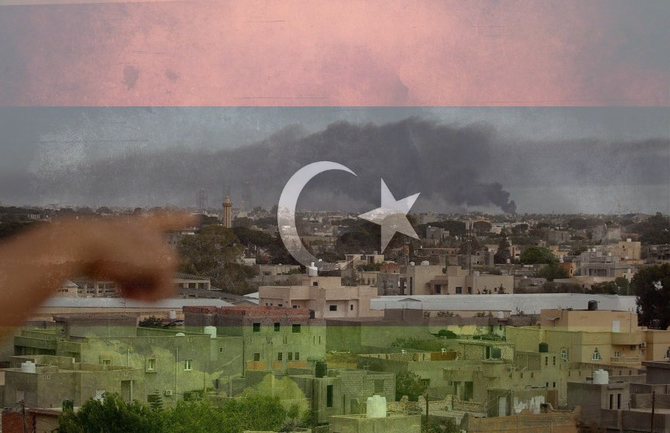 Slightly more than a year passed over start of retired General Khalifa Haftar’s attack on the Libyan capital, Tripoli. It was on April 4, 2019 exactly, a time when Libyans were awaiting the holding of the Libyan Forum on April 14, 2019 in the city of Ghadames as a culmination of efforts led by the international community and by the UN mission in Libya more specifically. With the presence of the United Nations Secretary-General Mr. Gutierrez in Libya, finishing touches to the success of this forum were being put together.

This treacherous attack on the capital came as a blow to exhaust the hopes and dreams of all Libyans in establishing their civil state. A state of modern institutions and in which democracy would prevail in justice, equality and human rights would be respected. Libyans have been suffering from killings, destruction, displacement, insecurity and lack of basic services due to this fierce military campaign supported by major countries and Arab countries that oppose the Arab Spring revolutions. The price paid by the Libyans as a result of this aggression has been high, as the number of civilian martyrs reached at least 500 martyrs and more than 700 wounded, according to the latest statistics. The number of displaced people reached level of more than 29,000 families, or about 165,000 individuals, according to January 2020 statistics, in addition to the damage to the infrastructure and the demolition of residential and public buildings, hospitals, schools, migrant shelters, and others.

The question that was being constantly asked at the beginning of the aggression by many journalists and those following the Libya issue was: “Will the forces of the Government of National Accord be able to defeat the forces of Khalifa Haftar located just a few kilometers away from the the capital, especially as the latter enjoy military support from some countries in face of international silence? To maintain this aggression and to achieve victory on what does the national reconciliation government count?” The answers were clear from the start. The victory would be achieved and the Libyans were determined to achieve it because there were enough factors for that.

First, the enormous sacrifices and heroic battles that the Libyans fought during the February revolution to bring down the Gaddafi regime, which claimed the lives of thousands and left as many wounded, was not to be wasted and the Libyans would not accept return of military dictatorship and return to a totalitarian rule.

Second, the retired general Haftar did not and still does not have a popular base, neither in the Libyan East nor in the West that would enable him to gain popular support in achieving his ambitions to govern the country. Especially in view of his record of defeats, his agenda to seize power and pass it on to his family and his tribe after him, as well as his utter failure in his fight against terrorism in the eastern region, where he completely destroyed cities, such as Derna and Benghazi under the pretext of fighting terrorism and ISIS, using the conflict only to finish off his opponents and thwart their plans while ISIS managed to withdraw from the city of Derna to southern and central Libya in accordance with an agreement with Rafter’s forces of which records circulated within social media. It was only in 2016 that the forces of Al-Bunyan Al-Marsous launched the liberation battle of Sirte from this terrorist organization whereby they ended ISIS presence in the central region and the surrounding areas, resulting in martyrdom of hundreds and wounding of thousands of brave men.

Third, the combat capabilities and high efficiency gained by the GNA government forces and the forces supporting them far exceeded that of those fighting in the rebel ranks of Haftar. The GNA forces have the determination and patriotism. They want to defend the land and take power from the firm desire to establish the state of democracy and social justice sought by all Libyans, whereas the other side recruited by force and under the threat of weapons and promised to pay money to unemployed youth, in addition to mercenaries who were brought in from Sudan, the Janjaweed and the Russian Wagner Company, for which the UAE pays the bill. A year after this painful memory, and through the evaluation of the events, the Libyans noted the difference in attitudes between the active and interfering countries in the Libyan affairs, as they revealed to them who are friends and who are the enemies, who traded the blood of the Libyans in exchange for their own interests, going against all the norms, covenants and international laws, be it issued by the United Nations or the Arab League or human rights and humanitarian organizations and support by all means this rebel to destroy the country and its capabilities and kill innocent people.

History will mention in its bright pages all who stood with the Libyans and with their legitimate government in their battle against the militarization of the state and the return of dictatorship and the rule of the individual and the family, whether by political stance or public support.

Khalifa Haftar has seen the state of confusion that he is experiencing now many times so far. He experienced many setbacks starting from the zero hours when he requested  the mandate. His forces suffered successive defeats in the axis of south of Tripoli and the eastern region of Abu Gurain in central Libya. He lost several cities on the west coast and more importantly the Al-Wattia air base, upon which he highly relies in his attack on the capital. At the political level, the world, and in particular the countries supporting him, are certain that Haftar is a losing card and dealing with him will not serve their interests and will leave him one after another. .