A major escalation in tensions between Russia-Ukraine in the Kerch Strait: What is next? 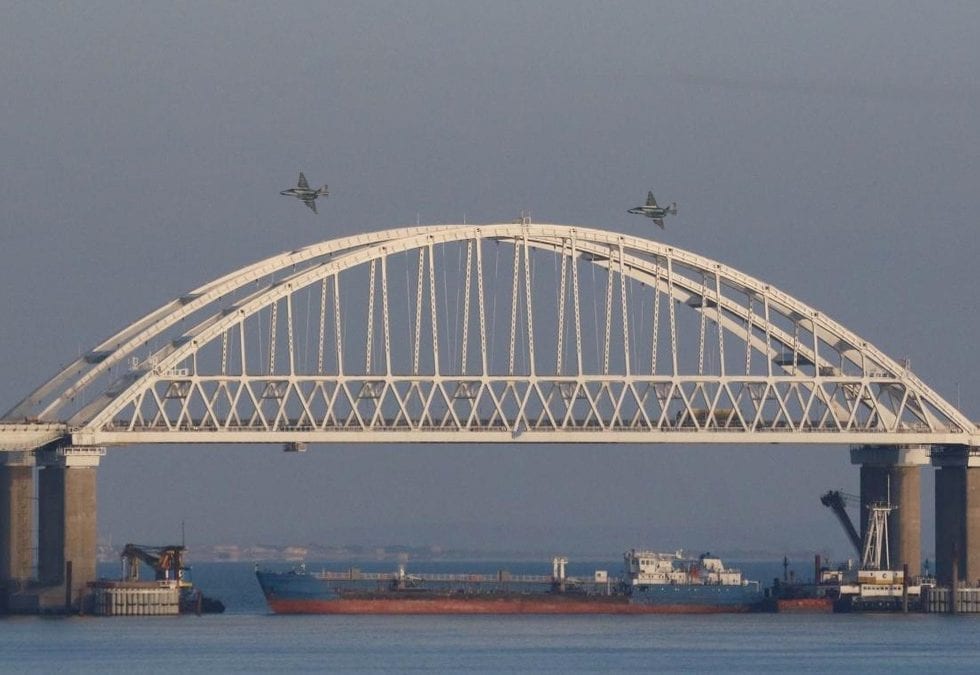 On Sunday, Russian Coast Guard vessels fired at and detained two Ukrainian small armed boats and a tugboat with their crews (leaving a number of Ukrainian crews wounded) off the Crimean coast on their way from Odesa to Mariupol Port. Russia accused Ukrainian ships of illegally entering its territorial waters, while Ukraine blamed Russia for violating international law. Russians suspended the maritime traffic by placing a tanker under the Kerch Bridge, which is the only access to the Sea of Azov. Ukraine’s parliament approved to impose martial law for 30 days. Both Ukraine and Russia requested an urgent meeting of the U.N. Security Council.

Background – A conflict in a hybrid war context

Since 2014 Euromaidan uprising, the Russia-Ukraine conflict has been going on in a hybrid war context with Russian illegal annexation of Crimea and its backing of separatists in Donbas region.

The new arena of its hybrid actions is the Sea of Azov, where we have been witnessing increasing Russian actions for the last couple of months. These include controversial construction of Kerch Bridge (15 May 2018) which provides the only land connection between Russian mainland and Crimea, de facto blockading Ukrainian ports in the Azov Sea by increased long during detentions of Ukrainian sea vessels, and at the same time reinforcing its naval capacity in the Sea of Azov by redeploying additional warships out of Caspian Sea.

Both Russia and Ukraine have freedom of navigation in Kerch Strait and Sea of Azov, which is defined as internal waters of both Russia and Ukraine according to the 2003 treaty. While Russia claims the Kerch strait as its territorial waters after annexing Crimea, Ukraine doesn’t accept Russian annexation and certainly its claims of invalidation of 2003 treaty, and intends to revise the status by determination of the demarcation line in the Azov Sea and the Ketch Strait and plans to carry this issue to international courts.

As a response, Ukraine announced its plans to create a naval base at Berdyansk in the Sea of Azov by the end of 2018 in order to provide reliable coastal defence, which also escalated the tensions. On 23 September Ukrainian navy passed two ships (a tug and search and rescue vessel) through Kerch Strait.

While US government aims to boost the Ukrainian navy with offering new capabilities, UK is planning to deploy more to add its current training assistance in Ukraine. On the other hand, the EU is progressively imposing restrictive measures against Russia in response to the illegal annexation of Crimea and the deliberate destabilisation of Ukraine.

The response from NATO and the EU was not more than asking for de-escalation in the region.

NATO alliance held a special NATO-Ukraine Commission meeting on Monday on the situation in the Kerch Strait. Secretary-General Jens Stoltenberg also spoke with Ukrainian President Petro Poroshenko by phone, before holding a press conference on the crisis.

“There is no justification for the use of military force against Ukrainian ships and naval personnel,” Stoltenberg said at the press conference.

“Russia’s ongoing militarisation of Crimea, the Black Sea and the Sea of Azov, poses further threats to Ukraine’s independence,” Stoltenberg said. “And undermines the stability of the broader region.”

While NATO continues to provide political and practical support to Ukraine, it has also increased its presence in the Black Sea region on land, with air policing and with naval capabilities. Within the context of tailored Forward Presence, which refers to additional activities performed in the South-eastern region of the Alliance (particularly in the Black Sea), NATO’s presence has been increased with a number of air/maritime measures.

The EU reacted with a statement on Sunday evening, expecting Russia to restore freedom of passage through the Kerch Strait and urging all to de-escalate the situation. Donald Tusk, President of the European Council, tweeted next day towards morning, condemning Russian use of force and urging to refrain further provocations. HR Mogherini was the last to tweet in the morning, finding the developments unacceptable and informing ongoing ambassadorial EU meetings on the subject.

There are also reports that Merkel called for de-escalation late on Monday in a phone call with Putin while the EU member states are discussing further sanctions. Though the Russian military interventions to Ukraine perceived as a threat to Europe as well in public opinion, the first reactions seem to be cold-blooded, or lukewarm, yielding to a “wait and see” policy.

What does it mean?

With this attack, not only tensions between Russia and Ukraine have reached their most dangerous moment, but the dispute could also become a major test for NATO, US, and the EU as well. The last incident reveals that a weak response to that would give Russia the assurance to carry out similar aggressive actions in Lithuania, Latvia, or Estonia — all of which are NATO members. Additionally, lack of political front against Russian aggression within the EU could widen the Union Crack.

In addition to the land conflicts in Crimea and Donbas, the Sea of Azov is likely to turn into a maritime conflict zone between Ukraine and Russia.

Russian seizure of Ukrainian navy ships in the Kerch Strait by military force escalated the tensions in the Sea of Azov. By doing so, Russia aims likely to hinder Ukrainian efforts to revise the status of Sea of Azov and Ukrainian military buildup in Azov with Western support.

Russia continues to abuse the bilateral regulations in the Kerch Strait and the Sea of Azov and confirms its claims on recognising Kerch Strait as its territorial waters. Since the ports in Azov are key for Ukrainian trade and cargo shipment (more than 80 % of Ukraine’s exports go through the Sea of Azov), the Russian interruption of the maritime traffic in Kerch strait has a very significant impact on Ukrainian economy.

Russia has demonstrated that it will not let Ukraine and its western supporters to build its naval base and increase its military capabilities in the Sea of Azov.

When it comes to Russian domestic environment, we could argue that Putin typically uses aggressive military tactics in order to improve his declining approval rate. Putin has promised to turn his country into a global actor but Russia’s economic growth is slowing, and Russians aren’t happy. Therefore, it is highly likely that to strengthen his power grid and increase his public support, Putin might pursue his aggressive manoeuvres in this arena.

The escalation of the tensions in the maritime domain will likely continue in addition to the land domain in Eastern Ukraine. Both parties will also likely to keep raising their military buildup in the region. Western – particularly the U.S – support will be crucial for Ukrainian military reinforcement.

The highest risk is the escalation of this clash into a broader military confrontation between Russia and Ukraine. Since the conflict in the Donbas region is already live, the possibility of an escalation could not be ruled out. But Ukraine has considerably less naval power in the region compared to Russia, which decreases the possibility of such a wider escalation.

While Ukraine is strengthening its defensive forces in the Sea of Azov with Western support, it is very unlikely that the Russian advantage will be balanced. Kiev can only count on deterring Russia, both by reinforcement of its naval forces and diplomatic efforts by the EU and the US.

The Russian interruption of the maritime traffic in Kerch Strait and the Sea of Azov by inspections will likely to continue having a very significant impact on the Ukrainian economy. This might even add up to the increasing unpopularity of Poroshenko in the coming 2019 Ukrainian presidential elections, which is aimed by Moscow as well.

EU capitals are probably working hard to find a feasible policy. Yet, it is less likely for the EU to act before G20 which is going to convene on 30 November in Argentina where they’ll have the opportunity to meet Putin. It is not clear if new restrictive measures would be imposed on Russia. Sanctions are subject to dispute within the EU on their effectiveness and counter-productiveness.