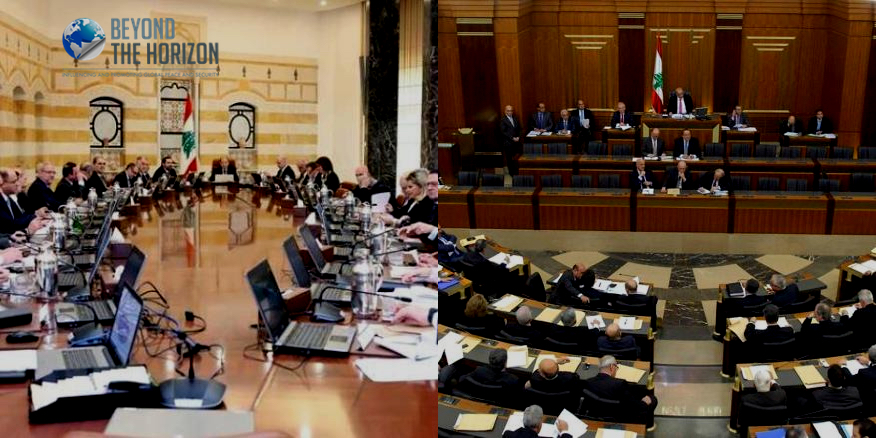 Lebanese ministers and MPs have been resigning in drove following the tragic explosion in the port of Beirut, and the subsequent popular anger against the whole political class. On Saturday a huge demonstration took place, and the following day popular movement continued. People were calling for the hanging of politicians, and even the Head of Hezbollah has lost his protective aura and his effigy was hanged in Martyr Square. Several Ministries were occupied by demonstrators, and ministers and officials were kicked out of Beirut’s destroyed neighborhoods by the chants of “resign!” and “murders!”. 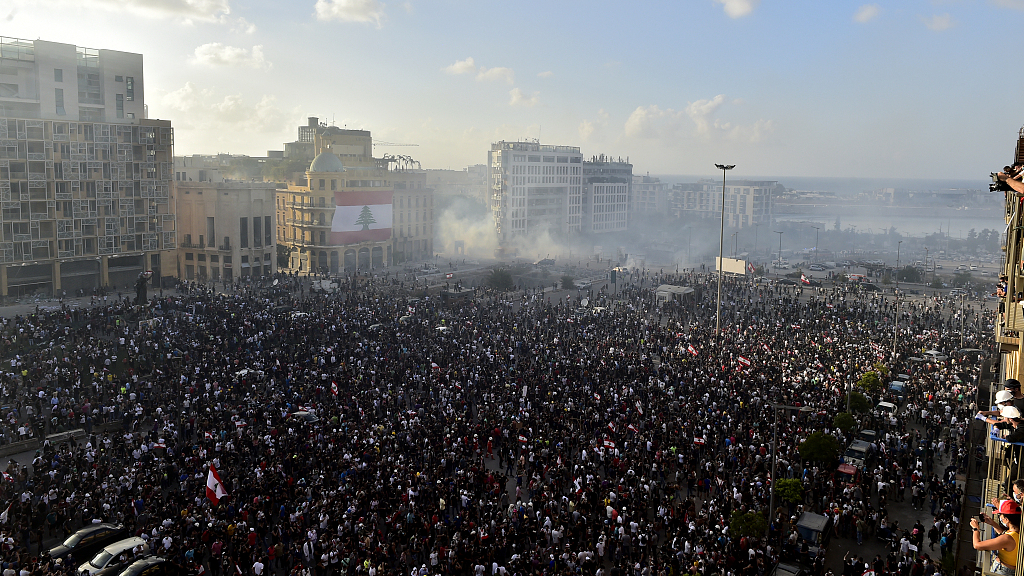 But the main questions that everyone has been asking were what are the consequences of these resignations. In other words, how many ministers have to resign to topple the government and how many MPs resignations would it take to dissolve the parliament. The short and simple answer is that more than a third of the government needs to resign for it to collapse, while no matter how many MPs resigned the parliament will not be dissolved.  Yet, like everything else in Lebanon, nothing is simple and there are always exceptions and loopholes.

Let us start with the government, although there is a big chance that by the time this article is published, the government might have resigned.

[Editor’s note: indeed, on the night of Monday 10 August, the government of Hassan Diab resigned, when the PM resigned in person, sparing himself the humiliation of having seven ministers resign and forcing the government to collapse.]

Article 69[1] of the Lebanese Constitution states that the government resigns under several circumstances, but in our current situation only the first two would probably be applicable: Either Prime Minister Hassan Diab resigns, or more than a third of the Ministers resign. With the current government consisting of 20 ministers, the third is 6.67, and 7 ministers are more than a third. Thus, if seven ministers resign this government will collapse, and become a caretaker government, with very limited powers, and no ability to hold formal meetings.

Moreover, the government can also topple if it loses a vote of no confidence in the parliament, which in our current situation might happen on Thursdays if the government does not resign in the next few hours.

I will be writing a full explanation of how a new Prime Minister and Council of Ministers are elected in the Lebanese system, once the government has officially resigned!

Until this moment 9 MPs have verbally resigned, and 4 have submitted a written resignation letter to the Parliament. Thus, many have been asking how many MPs should resign in order to force the dissolution of the parliament.

Unfortunately, according to the Lebanese constitution, the Parliament can only be dissolved in very specific and hard to achieve circumstances (if it fails to meet within two full sessions or does not discuss the budget, within a set time frame)[2]. Indeed, even if 127 out of 128 MPs resign, the only thing that will happen is by-elections[3].

There is an interesting point concerning by-election, it has to do with the numbers of empty seats which would affect the applicable electoral system (majoritarian vs proportional) according to the electoral law. Indeed, if one or two seats are up for election in a single electoral district, then the 1960 majoritarian law (used in 2009) is applied. If three or more seats are vacant, then the proportional law is applied. This creates some very interesting electoral calculation for the different political parties and parliamentary blocks, and might push several MPs to resign in some specific districts to change the applicable law to their advantage! 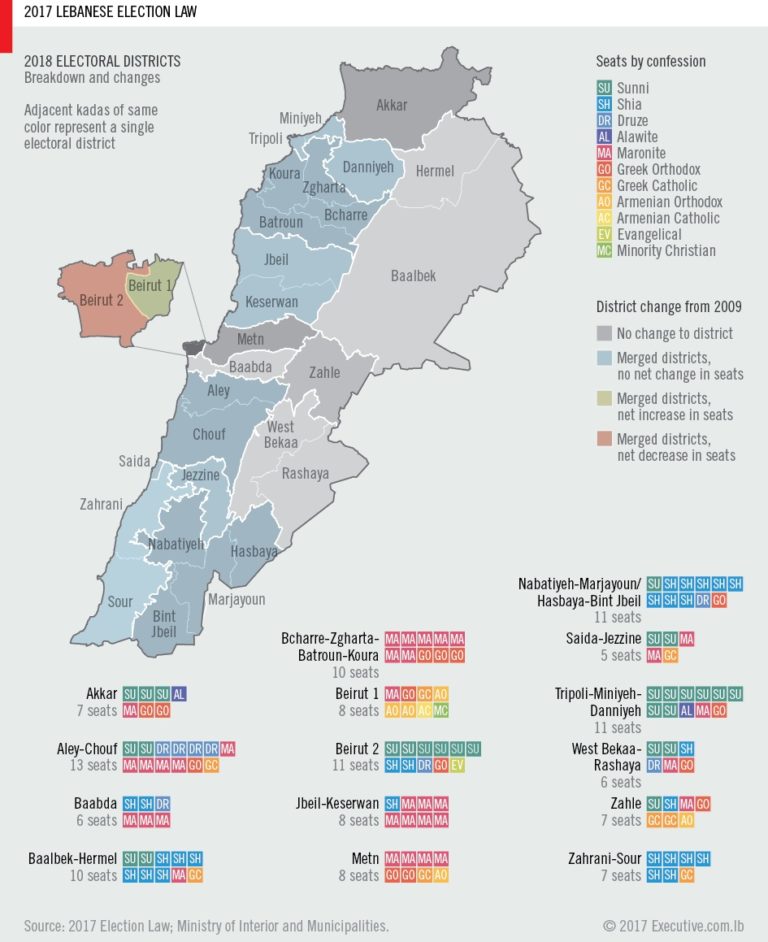 However, there is an added complexity, the quorum required for the proper functioning of the parliament is half plus one[4], or 65 out of 128. And there is a number of specific circumstances where a quorum of two-third is needed[5]. Thus, if more than half resign, then the parliament can no longer effectively fulfill its constitutional duties, and it can no longer legislate. Additionally, if most MPs belonging to a single sect resign, the Parliament would lose its sectarian legitimacy, forcing the Speaker’s hand. Indeed, the constitution stipulates in Part J of its Preamble, ” There shall be no constitutional legitimacy for any authority which contradicts the pact of mutual existence.” In practices, if Hariri’s parliamentary bloc resigns then most of the Sunni would have resigned, similarly with Jumblatt and the Druze. Thus, the two (Hariri and Jumblatt) hold a lot of say in what happens next and the possibility of early elections.

Finally, the resignation of these MPs is a very important step in the creation of a new political contract between the people and a new political class, opening the way for a possible resolution of the current economic, pollical, financial, and humanitarian crisis. Indeed, the main problem facing the current parliament and any government elected by it, is the lack of trust of the people towards the political elites, and only free, open, and democratic elections can restore part of that trust!!

Link to the Lebanese Constitution text in English and Arabic.

[1] ARTICLE 69 of the Lebanese Constitution

[2] ARTICLE 55 of the Lebanese Constitution

The President of the Republic may, in accordance with the conditions stipulated in Articles 65 and 77 of this Constitution, ask the Council of Ministers to dissolve the Chamber of Deputies before the expiration of its mandate.

[3] ARTICLE 41 of the Lebanese Constitution

[4] ARTICLE 34 of the Lebanese Constitution

The Chamber shall not be validly constituted unless the majority of the total membership is present. Decisions shall be taken by a majority vote. Should the votes be equal, the question under consideration shall be rejected.

[5] Changing the constitution, and the first round of electing a president