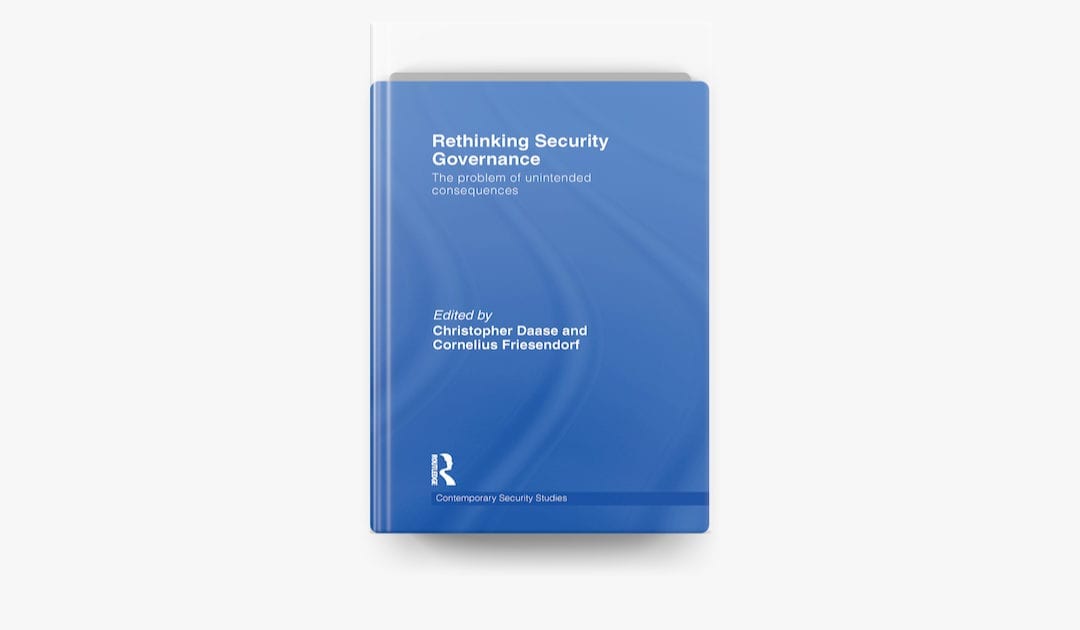 The term security governance has become a buzzword in the realm of security studies, especially after 9/11 attacks. Yet, there are few empirical works on the unintended consequences of security governance and no work on conceptualizing and theorizing the concept. Friesendorf and Daase take up this heavy work by editing this volume to include nine chapters contributed by scholars of security, an introductory and a concluding chapter penned by themselves.

The editors set the basics of security governance and what should be understood from unintended consequences in the introduction. Accordingly, as opposed to traditional state’s maintenance of security through its military and other security forces under its hierarchical order, security governance is an initiative undertaken by states, non-state actors and private actors horizontally and in a decentralized way with the ultimate goal of attaining a more secure world globally.

Historically speaking, the prevalent mode of security policy until the end of the Cold War was more geared towards provision of territorial integrity and deterrence against threats. However, the implosion of Soviets triggered new threats to security like internal ethnic conflicts, state failures, terrorism, human trafficking, migration, organized crime and likes. Those new types of threats added the referent of objects and required global security governance by governments, with governments and without governments.  Naturally best situated for such coordination, the UN and NATO showed the first examples of such intense formal and informal coordination to bring together expertise from various actors of different echelons.

It is possible to claim that there is a general positive perception attached to global governance due to the transnational nature of the current problems. Yet, the term ²unintended consequence² has a rather negative connotation despite the probability of having a positive outcome.

An evaluation of those unintended consequences calls for a closer look into several dimensions. To start with unintended consequence means a difference between what was intended and the result.  The problems related to this difference is multifold. First is the multiplicity of the actors. There are so many actors that who intended what may be meaningless in the end in most cases. Even though having an articulated endstate, various actors may contribute at a specific time and location to lose the grand picture.  Second, what is the yardstick to measure or understand intentions? Researchers do not possess a magical tool to look into the heads of the stakeholders. Even so, in many cases, those stakeholders may not have a clear mind about their intentions either. The editors suggest taking official statements and statements of the stakeholders as the main reference of intents.

There are also reasons to alleviate the responsibility for failures. First such actions are taken in environments bearing great uncertainties and risks. Second, the multiplicity of actors and their heterogeneity to include multinationality and multi-culture result in less effectiveness. When those features of the recipients of such actions included, the rate for risk increases.

After those basics by the editors, the bulk of the volume follows to include contributed chapters which can be grouped under two categories. The first category examines the consequences of assistance efforts in terms of security and reforms in authoritarian, war-torn or weak states under chapters 1-4.  In the first chapter, the World Bank’s involvement in higher education reform in Egypt is examined. As the programme started to get funding, its control was taken over by the ruling party. The reform alliance consisted of domestic policymakers who joined the state structure.  The ruling NDP manipulated programme to define stakeholders not to challenge the authoritarian rule. In sum, the efforts to democratize Egypt actually served to strengthen the authoritarian rule. In the second chapter complex peace support operations of NATO and EU in Bosnia and Kosovo are studied. The insecurity and low domestic capacity resulted in use of police and military forces in law enforcement and support which are exclusive to each of the forces. The effort resulted in militarization of the police and politicization of military forces which goes against security sector reform principles. The third chapter is devoted to state-building efforts with four different variants, namely liberalization-first, security-first, institutionalization-first and civil society-first, with each having different unintended consequences as a frequent feature.   The author succeeds in convincing the reader in this by showing the complex structure regarding state-building. By nature, the action requires taking over institutions by foreigners at several levels to include headquarters and operational level. Those trustees have to communicate with both international, national, inter-organizational and intra-organizational levels to effectively coordinate. However, it is not easy to make every stakeholder share the same vision and intentions and also communicate this to the host nation. In most cases, there are negative effects and retrogression of the relations despite good intentions.

The fourth chapter is a perfect example to heed the warnings in the previous chapter. According to the author Bush administration after invading Iraq and Afghanistan did not engage in building sustainable and democratically elected state institutions. But it tried to give piecemeal assistance to help establish security forces. The result was insurgencies and in many cases blowbacks meaning the elements trained by US forces turned against US forces and coalition both in Iraq and Afghanistan.

The second category to include chapters 5-9 has been devoted to the consequences of sanctions and other privatized solutions to regulate local actors. The fifth chapter expounds the comprehensive sanctions against Yugoslavia to result in Milosevic’s harder grip on the state, the victory of the cunning and the criminal and total loss on the side of normal folks. In this regard, the criminal are competent enough in most cases to find new remedies to the new precautions. But it is the regular people paying for those remedies. The sixth chapter examines measures against financing terrorism to have both positive and negative consequences, the former to offset the latter. The seventh chapter focuses on privatized migration control to result in fewer migrants but greater human rights violations with the negative aspect garnering acceptance as collateral damage. The eighth chapter discusses the targeted sanctions on the example of Iraq to have negative effects on the Iraqi society and to cause loss of faith among UN officials and other actors in the legitimacy and utility of UN. The ninth chapter deals with the issue of privatization of force to yield positive results in the short term while shaking the foundation of private enterprise and the state’s monopoly on the legitimate use of force.

The editors start with an agnostic tone about the nature of the unintended consequences of security governance. After all nine chapters with negative effects and with only two positive effects alongside, they change into a more normative tone to suggest ways on how to minimize negative outcomes. As such and in line with the aim of the book, the first solution found is to raise awareness. Second is to deliberate the long-term impacts. The heat of the problem should not blind the stakeholders on the long-term losses despite short term gains. The third is to have an open mind and a well understanding of the recipient side. Prejudices or a posteriori premises may obstruct understanding. Fourth is to hold the stake holders accountable for their failures. Five is to enhance cooperation and coordination between stakeholders. This may be horizontal and vertical meaning coordination between operational and strategic levels of one organization and between relevant personnel of the organizations involved. The last is to create scenarios before an action to anticipate and find cures to unintended consequences.

In general terms, the editors have selected an important subject that requires even more attention. The contribution of the scholars is also praiseworthy in that each of them gives understanding on a different aspect of those unintended consequences.

Yet, there is a problem in the view of the editors towards the actors. To be more precise, organizations like the UN or NATO are all fora for states to further extend their influence or project power. In many cases, they are utilized as sources of legitimacy putting a multilateral mask while following a national agenda. The great powers based on their contribution to the budget easily man and steer such organizations. So, in many cases, it may not be possible to find out who really intended to do what by initiating and help executing an action despite loud announcements on the aims and objectives.

* Onur Sultan is a research fellow at Beyond the Horizon ISSG.