Regional Security in the Middle East** 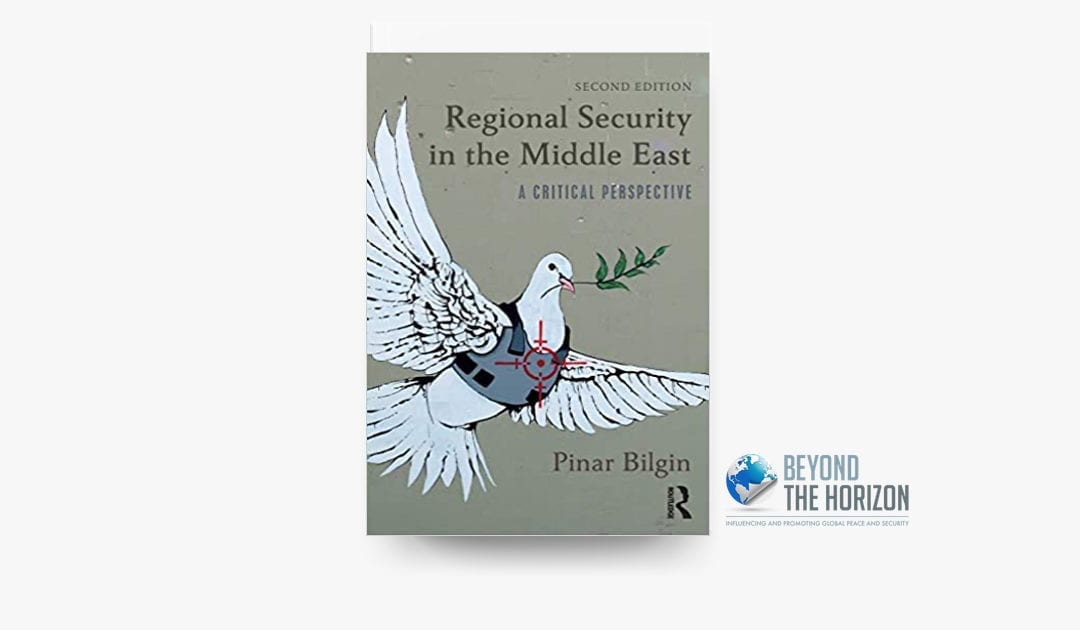 “Regional Security in the Middle East” by Pinar Bilgin is an amalgamation of efforts to depict and understand the interactive dynamics of security and security agenda in / for the Middle East. Even though Regions and Powers by Buzan and Waewer succeeds in giving an insight about internal and external mechanisms shaping the security dynamics on any region this book impugns validity of many ideas or thoughts taken for granted by double reading. Those ideas or thoughts belong mostly to the neo-realist school of thought.

At the very heart of the study there lies the intent to disassemble the two core terms “security” and   “region”. As such, it sets out with reconceptualizing security from a critical perspective through two main directions, namely: broadening and deepening the concept through refusing the primacy of the sovereign state and rejecting “theorizing” as being a neutral tool. The author believes theorizing privileges certain practices while marginalizing some others, creating fertile grounds for the privileged to take root. Lamenting the scarcity of publications reflecting security considerations within the region, she takes on the task to lay out security perspectives from outside and within the region in a critical and comparative way following a chronological logic. While doing this she takes on a normative tone suggesting change.

Bilgin does not try to refute the utility of current security agenda building upon military solutions to the problems within the region. But she tries to broaden the panorama or enlarge the view for the decision makers / students so that they can base their decisions / inferences upon better analysis of whole catalogue of fields pertaining to security. In other words, she calls for a comprehensive approach that pays attention to local security concerns also.

The author delineates three specific aims for the book:

Further disassembling security, the author contends even though not uniform, most Cold War security studies reflected a privileged focus on the primacy of the state, on its military dimension and preservation of the status quo. Two main colors of those studies were the dominance of realist approach and the context of  “Cold War” they were created within. As several currents of objectivism appeared in the general spectrum the mainstream thinking survived the demise of Cold War.

Students of Alternative Security thinking were for common security rejecting zero-sum calculations. In the case of a nuclear war there would be no winner. Based on this argument the security had to be attained not against but with the adversary.

According to Peace Research students the absence of war should not be conflated to peace. For attainment of peace conditions for social justice should be fulfilled and structural causes of instability should be tackled as proposed by Johan Galtung. ‘Stable peace’ concept by Kenneth Boulding would effectively argue that a peace attained through threat and use of war was not to last.

One last strand, students of Third World were for the idea that prevalent East-West stability and search for equilibrium did not mean much to those countries. For them as opposed to dominant Western rhetoric, a change in status quo was a good thing. The reasons of insecurity were rather internal than external. In this logic, state and institution building critical for raising human capital and increase trade creates more conducive trend to change status quo in their favor.

In this sense, end of the Cold War marked a pursuit to adjust on the side of the mainstream thought. An important book as such was Buzan et al.’s “People, States & Fea” published in 1991. The authors would posit in the book that:

In 1991, Ken Booth would suggest a similar broadening to include “all those physical and human constraints which stop them from carrying out what they would freely choose to do”. As many subjects could register within the same category to include illiteracy and human rights abuses, the final objective could be said to tackle those non-military issues before their solution requires military methods.

Bilgin criticizes Buzan’s arguments because of his over-reliance on neo-realist state-centric approach saying : ²the state is generally privileged as the actor historically endowed with security tasks and most adequately structured for the purpose.² Her main argument is that reliance on state for non-military threats to security will not produce intended results. Despite the well position of the state for most security matters, some others will require agency of non-state actors. She further elaborates on Buzan’s claim that security studies are dominated by states replying the reason is not the absence of other referents and agents to challenge the state but the security analysts thoughts as such.

On her pursuit to disassemble the second term “region”, Bilgin contends that they have been defined and redefined as a result of political activity. The term Middle East was coined by British India Office towards the end of 19th century to organize the defense of India for the lands standing in the middle of England and India. It was further redefined by British and later US strategists describing their spatial understanding for the most optimum space to implement specific security policies. During Cold War, the term was redefined in line with containment policy against Soviets. Even after the developments following the end of Cold War the term survived with many differences on understanding. This clearly shows that space and politics has a relationship. It should be noted that not all societies have been able to impose their maps onto others. Rate of success is dependent on the relative power of the inventors.

In line with this argument, there has existed multiple views on the regional security advocated by different actors four of which come to fore in the subject region. The first one is the well-known Middle East perspective advocated by the West to further its own security concerns and interests. Bilgin argues that ²the region is not a ‘real historical entity’ and there are relatively few common characteristics that could be used to view this group of states together as a region.² During the Cold War, this geography was tried to be kept under control and stability in order not to provoke a counter action from the Eastern Bloc or Russia.  In the post-Cold War period, any compromise in the stability of this region has been perceived as a threat for Europe or the West in wider connotation.  As a good example of this understanding, following is an excerpt from the NATO Prague Summit (2002) Declaration: “The Mediterranean Dialogue is an integral part of the Alliance’s cooperative approach to security. It is based on the recognition that security in Europe is closely linked with security and stability in the Mediterranean […]”. (NATO 2011)

A second perspective developed against this Western understanding was Arab Regional System. In their work published in 1979 Ali Eddin Hillal Dessouki and Jamil Matar would argue that the term Middle East was a political invention that did not correspond to the nature of the area but aimed at tearing up Arab homeland by including non-Arabs. They argued the term served better to describe interactions between Arab leaders and their interactions with outer world. Yet it is noteworthy that this was another political act to facilitate ascendance of Nasser to the leadership of Arab nations. This Arab nationalism itself was invented at the end of 19th and beginning of 20th century to motivate Arabs revolt against first Ottoman then colonial powers. As more nations gained their independence this Arab security rhetoric lost effect in face of new state-centric understanding. Also, the Gulf states broke ranks to join US approach. After the death of Nasser statist security concerns took precedent. Yet, states within the region to include those of the Gulf continued to justify their acts with reference to Arab National security.

A third perspective, Euro-Med Region was a result of European efforts of distancing itself from US policy towards the region dovetailing decline in Pan-Arabism. Although not delivering much during Cold War, in the 1980s European politicians came to the understanding that stability in the Middle East was an integral part of their own security. This Euro-Med Region did not include Gulf countries and other non-littoral states to include Yemen, Iran etc. The main weakness of this representation is that the conception encompasses non-military issues not from the perspective of the regional states but from that of Europe. The ultimate goal is that those issues do not become ones of Europe. The remedy to that end was encouragement of economic liberalisation and sustainable economic growth which would entail political participation and democratization.

The last perspective to be mentioned is Muslim Middle East coined after Islamic Awakening in 90s. Islamist discourse had actually been mobilized first by Saudis to counter Nasserism. The Islamic revolution in 1979 further heated anti-statusquoist rhetoric. In the 90s it was picked up by Hezbollah and FIS where the latter reverted to violent tactics when obliterated by the military from the political scene. Currently it is the hardest to be tracked due to the reason that it is utilized by non-state actors on their claim for legitimacy. Running the gamut from Hezbollah to Saudi Arabia, Islam has become a discourse to garner legitimacy although their message has anti-Islamic content.

It is possible to claim that 1990s US backed Middle East perspective gained acceptance until invasion of Iraq in 2003. Then there was an unwillingness to accept this based on the fears that Israel with its economical might and strong Western support would dominate a united Middle East. Since than the perspectives get support from different state or non-state actors at different times.

The author concludes the book expressing her belief in potential to create a security community in the region based on application of Adler and Barnett’s approach. Accordingly, states willing to address security problems by pooling their resources could create such community. But the first requisite would be to view insecurity rather that themselves as threat. However, she equally admits that a bleak outlook is awaiting the region. So, she suggest instead of drawing optimistic pictures the students of critical should draw a realist picture.

Bilgin’s book contributes to the literature on regional security in the middle East by providing a critical interpretation to the prevalent discourses. She aptly classifies and enumerates critical arguments about the subject and tries to show fault lines between the neo-realist and critical approaches.

* Onur Sultan is a research fellow at Beyond the Horizon International Security Studies Group.