Polarisation: Understanding the dynamics of Us versus Them** 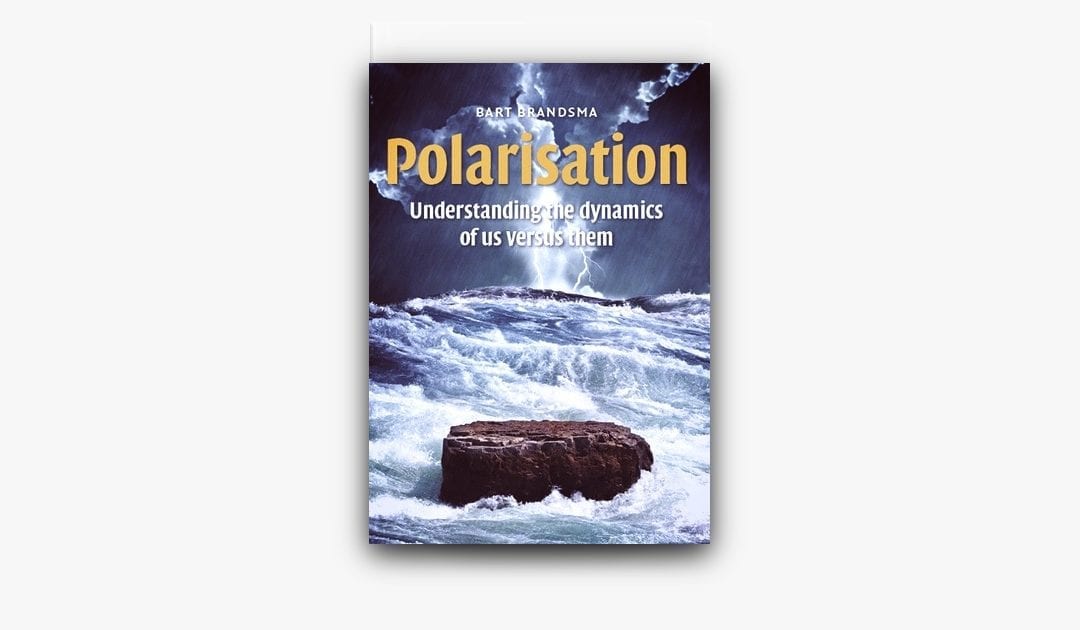 Bart Brandsma’s book at hand is a timely and precious contribution considering the time we live in. The book opens up the debate on how to manage divergent voices and preserve public order while respecting the democratic right of free speech and free articulation of thoughts. Declaring war on bigotry and dualistic (black-white) world view but at the same time taking into stock the need to address the societal reality, the author delves deep into minute dynamics of public debate, mechanics of argumentation and idiosyncrasies of human behaviour.

Polarisation is about reinforcing “us-them” thinking, which can easily escalate into a violent confrontation. It differs from “conflict” in the sense that a conflict features directly involved parties, problem owners who you can identify. But in polarisation, the question is, who is owning the conflict, who is playing a decisive role and who should be addressed?

Who owns the conflict?

Polarisation is a game between pushers, joiners and the silent. The most visible role is for the ‘pusher’, which has the simple task of supplying fuel for the us-them thinking. While the pusher at one side increases the pitch, the counterpart at the opposite pole does exactly the same. They possess one thing in particular: a conviction of (moral) self-righteousness. The ‘other’ is 100% wrong and should be defeated at all cost. Pushers want to stay on the edge, in the spotlight. If this means seeking a more extreme viewpoint, then that is what they do. Moderating their behaviour means losing face.

The ‘joiners’ are not as extreme as pushers and will often try to accentuate this difference to situate themselves in a more favourable position in the eyes of the audience. But they have chosen a side, and especially when the polarisation escalates it becomes almost impossible for them to switch sides. In a way, they have committed themselves.

The ‘silent’ are in the middle field, a group of people who choose not to take sides. They resist the pressure of polarisation. Sometimes because of indifference, people are motivated by neutrality. The silent are invisible but are, in fact, the target group of the pusher: this is where the pusher gains ground, by getting this middle group to choose.

Polarisation has three main characteristics. Firstly, polarisation is made in our head. This is what sociologists call a “construct.” Constructs are temporary and never reflect reality, but nevertheless can cause severe problems. The starting point of constructs is: ‘we know with great certainty that…’. In polarisation this results in two identities set against each other. By assigning certain characteristics to the “other” group, each group in fact define their own identity. This means polarisation is an identity creator and that’s why we need it. Secondly, polarisation is gut feeling dynamics. However well-picked words and arguments are, they do not land. They don’t reach the rational mind but are more likely to strike in the gut, adding fuel to the polarizing dynamic. This brings us to the third characteristic: polarisation needs fuel. This is provided by attention, and positive as well as negative statements do contribute.

But polarisation is not about identity

Many people think conflicts arise because people are different, and that polarisation is about identity. In his book, Bart Brandsma introduces a contrasting approach. He argues conflict arises not from difference but similarity. We resemble each other as we all want the same things ranging from wealth to social status, respect, you name it. The difference in identity is not the divisive element, although it may seem like that. Essentially, it’s a fight over scarce goods all involved want. Fundamentally, polarisation is an ego-business: every member of each group wants a certain good for him- or herself. And this is more important than the interests and the well-being of the greater good.

Interestingly, Bart Brandsma postulates that the phenomenon of conflict is part of being human, part of society. Conflict is the normal situation, not the exception. In this view peace is a long series of conflict we have dealt with successfully. If the conflict is a way of personal or societal development, it is then more or less ‘part of the human journey’. Consequently, conflict is neither good nor bad, and there’s no question of guilt (blame). Another result of this perspective is that as conflict is part of life, we can/must train ourselves to deal with it. Stronger even, conflict does not disrupt cooperation, it is an opportunity to build good cooperation. Whether one follows this perspective or not, the question of guilt is anyway counterproductive. If we make guilt and blame central, and link it to the difference between identities, we keep on fuelling polarisation.

It happens more and more that police, fire brigades and ambulances are attacked during riots. How does this make sense? Civil services like police, fire brigades and ambulances are expected to be in the middle, which means neutral and without taking a stand. People in the middle are never really trusted by either group, but they are tolerated as long as they serve the interest of the opposite poles. There is seldom a relationship of mutual trust. When polarisation pressure increases, the central position becomes no longer tolerated and people ‘in the middle’ become the scapegoat and are often the target of aggression. This scapegoat provides a safety valve for guilt and anger. As we will see later, these civil services will be challenged to stay in the middle and communicate and connect from a curious, respectful and non-judgmental internal state, while at the same time respecting their own boundaries.

When confronted with conflict, we tend to think that dialogue is the solution, and the best way to reconnect with each other and to find reconciliation. Yet this is a misconception. We first have to be aware that a polarisation process goes through several stages. In the prevention stage (the period up to escalation) dialogue in the sense of exchanging knowledge about each other’s identity can be useful. In the heat of the conflict (intervention phase) dialogue is impossible, useless, counterproductive. In the heat of anger, there is stronger interest in sticking to the conflict than in finding a way out of it. But fortunately, in every conflict there is a limit to the duration of this phase, and when keeping the conflict going costs more energy than it needs to end it, a new phase is entered (mediation phase). Now is the time for each pole for some self-reflection and expression. Both parties become aware of their model of the world and learn skills in handling conflicts. After all, real training in peace is about practising the skills to handle conflict. Only in the reconciliation phase, the timing is right for a ‘real dialogue’ where both poles are ready to start listening and curious to really get to know each other.

Can polarisation be managed?

As a leader or manager, or as a society, it’s possible to learn to play an effective role and ‘manage’ somehow polarisation. Having knowledge of the characteristics of polarisation, recognizing the different roles and stages and being able to define the right interventions with the right timing is a prerequisite. Moreover, there are four game-changers, four crucial factors that can influence the game. First of all, it’s possible to change the target group. As the most effective way to polarize is to force the middle group to choose, de-polarisation can be achieved by investing in the middle. Through role models, or key figures in the community, the silent group in the middle can be addressed and engaged for common goals. In this way they will be less prone to take sides. This closely resembles the second option of changing the subject of polarisation in a subject that binds. Talking about identities can, for example, be transformed into conversation about security or desired way of living together. The last two game-changers are related to the internal state of the person concerned. Expressing opinions pushes people towards the poles. But changing the position towards the middle and listening to people reduces the stress of the conflict. Never underestimate the power of deep listening and genuine respect and connection. If one, on top of that, succeeds in changing the tone from judging and defending one’s own opinion into showing real interest and respect (s)he can speak in a mediative attitude and approach, which can cause ‘miracles’.

Bart Brandsma’s this book certainly contributes to the work of influencers and critical voices within our societies in understanding the causes and effects of polarisation. It contributes to efforts for mending the social fabric that witnesses challenge from time to time. Especially at a time where the issue of radicalization and polarisation debate is raging the domain, it shows thinkers and practitioners alike a methodology on how to keep collaborating with those not sharing the same world views and proposes an approach. To us, to the society as a whole, it well teaches the conflict is part of being human and progress and how to deal with it. Overall, the book accomplishes well to get its main message across and is certainly a must-read.

** Bart Brandsma, Polarisation: Understanding the dynamics of Us versus Them (Amsterdam, BB in Media, 2017).