Network for Youth Awareness of NATO

In order to contribute 70th anniversary of NATO,  Beyond the Horizon creates this portal to promote this initiative.

NATO4Ever has been conceptualised to offer a set of four outputs to the target groups which are mutually reinforcing each other and will jointly contribute to attaining the desired end-results.

Network for Youth Awareness of NATO-N4YAN

We aim to increase public awareness and support for NATO by building an online platform particularly for the successor generation who use the internet and social media effectively. We intend to use this platform and other outputs to:
• increase awareness by publishing articles and generating audio, visual and audio-visual content,
• pique target audiences’ curiosity by preparing quizzes and other contests.
Other outputs (journal, panel discussion, article contest, drawing contests) are designed to augment the main output (N4YAN) and to amplify the messages that we intend to give.

Security in our daily lives is key to our well-being. NATO’s purpose is to guarantee the freedom and security of its members through political and military means.

NATO promotes democratic values and enables members to consult and cooperate on defence and security-related issues to solve problems, build trust and, in the long run, prevent conflict.

NATO is committed to the peaceful resolution of disputes. If diplomatic efforts fail, it has the military power to undertake crisis-management operations. These are carried out under the collective defence clause of NATO’s founding treaty – Article 5 of the Washington Treaty or under a United Nations mandate, alone or in cooperation with other countries and international organisations.

So far, Article 5 has been invoked once – in response to the 9/11 terrorist attacks in the United States in 2001.

NATO is an alliance of countries from Europe and North America. It provides a unique link between these two continents, enabling them to consult and cooperate in the field of defence and security, and conduct multinational crisis-management operations together.

What does NATO do?

The North Atlantic Treaty Organization (NATO) is an alliance of 29 countries from North America and Europe committed to fulfilling the goals of the North Atlantic Treaty signed on 4 April 1949. In accordance with the Treaty, the fundamental role of NATO is to safeguard the freedom and security of its member countries by political and military means. NATO is playing an increasingly important role in crisis management and peacekeeping.

For more information, please see: What is NATO?

Does NATO have its own armed forces?

All member countries that participate in the military aspect of the Alliance contribute forces and equipment, which together constitute the integrated military structure of the Alliance. These forces and assets remain under national command and control until a time when they are required by NATO for a specific purpose (i.e. conflict or crisis, peacekeeping). NATO, however, does possess some common capabilities owned and operated by the Alliance, such as the AWACS early warning radar aircraft.

What are the conditions for joining NATO? Which countries are eligible

NATO has an open door policy with regard to enlargement. Any European country in a position to further the principles of the Washington Treaty and contribute to security in the Euro-Atlantic area can become a member of the Alliance at the invitation of the North Atlantic Council.

Countries aspiring for NATO membership are also expected to meet certain political, economic and military goals in order to ensure that they will become contributors to Alliance security as well as beneficiaries of it.

NATO’s Membership Action Plan (MAP) is designed to assist aspirant partner countries in their preparations by providing a framework which enables NATO to channel assistance and practical support to them on all aspects of NATO membership.

What are the official languages of NATO?

The two official languages of NATO are English and French.

How do I apply for a job at NATO? Who can apply?

Nationals of NATO member countries may apply for all posts on NATO’s international staff. Appointments to most posts are made on the basis of interview panels and written tests.

Details of vacancies, procedures and application forms are available on the NATO Recruitment website.

Does NATO sponsor research projects? How do I apply?

There are various fellowship programmes available, including a number of science fellowships, the NATO-EAPC, and the Manfred Worner Fellowship. NATO also co-sponsors conferences, seminars, workshops and roundtables with NATO and partner countries on security-related issues.

What is NATO's role in the fight against terrorism?

On 12 September 2001, less than 24 hours after the terrorist attacks against the United States, NATO declared the attacks to be an attack against all NATO member countries within the terms of Article 5 of the North Atlantic Treaty.

This landmark decision was followed by practical measures aimed at assisting the United States in different fields, in relation to its campaign against terrorism.

For more information, please see: NATO and the fight against terrorism

Is NATO involved in Afghanistan?

Yes. A NATO-led mission called Resolute Support was launched on 1 January 2015 to provide further training, advice and assistance for the Afghan security forces and institutions.

It followed on from the International Security Assistance Force (ISAF), which was led by NATO from 2003 to end 2014 and helped establish the conditions for Afghanistan to enjoy a representative government and self-sustaining peace and security.

What is Russia's status – is it a partner country?

NATO-Russia relations started after the end of the Cold when Russia joined the North Atlantic Cooperation Council (1991) and the Partnership for Peace programme (1994). The two sides made a reciprocal commitment to work together to build a stable, secure and undivided continent on the basis of partnership and common interest in 1997.

Cooperation was suspended in April 2014 in response to Russia’s military intervention in Ukraine, which the Allies condemn in the strongest terms. Political channels of communication remain open.

How much does NATO cost and who pays for it?

NATO is an intergovernmental organization to which member nations allocate the resources needed to enable it to function on a day-to-day basis. There are three budgets: one civil and two . Each NATO member country pays an amount into the budgets based on an agreed cost-sharing formula. Taken together, these budgets represent less than half of one of the total defence budget expenditures of NATO countries.

What are some recommended books on NATO?

Publications from the NATO Public Diplomacy Division provide useful information and are available on the e-Library page, under “Publications”.

Those who are interested in the history and the beginnings of the Organization can read:

Even if a real history of the Organization is still to be written, two books can be of interest :

On the relationship between NATO and the United States:

How do I apply for an internship at NATO? Who can apply?

For information on how to apply for an internship at NATO, please visit the NATO Internship Programme Web site. 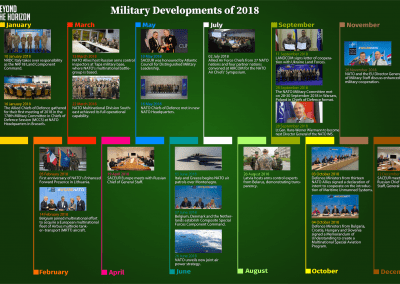 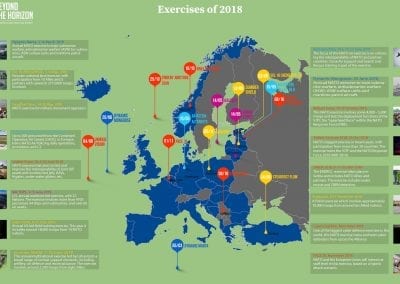 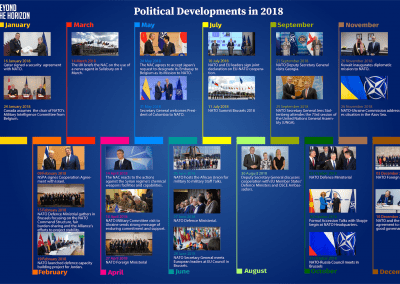 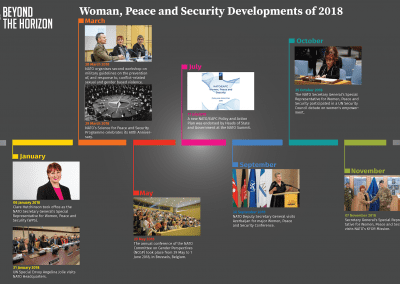 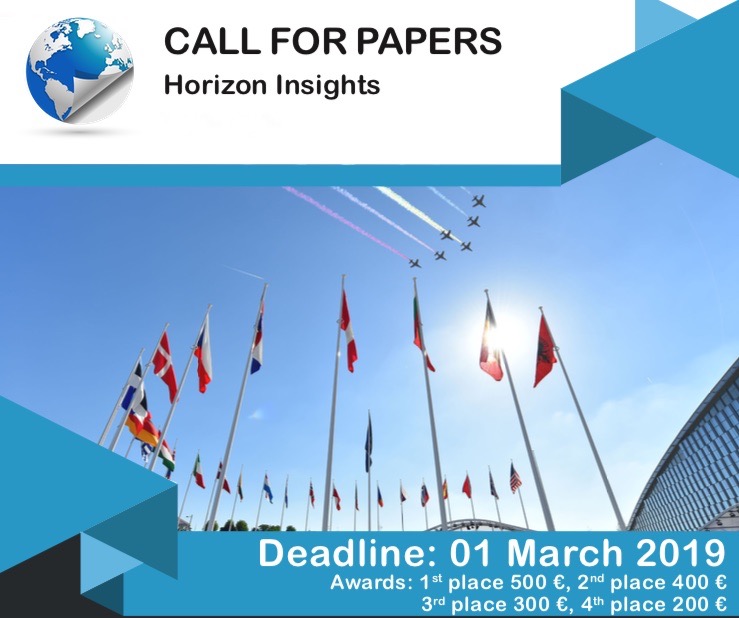 Horizon Insights is the quarterly open-access journal published by Beyond the Horizon ISSG. In line with the group’s mission, Horizon Insights disseminates research offering in-depth analyses, insight and realistic policies about chronic and emerging security challenges, crises, conflicts, and war. In more general terms, qualitative and quantitative works addressing defence and security-related matters are covered in the journal.

For this special issue, we will welcome your unsolicited manuscripts between 2.500-5.000 words. Having no intention to limit the scope, the manuscripts can be about, inter alia, NATO’s relevance in the face of emerging security challenges, future roles and perspectives or its importance for security in the transatlantic zone and in the globe. The deadline for paper submission is 01 March 2019. The best four articles will be published in the journal and authors will receive an award of €500, €400, €300 and €200 in descending order.

Paper submissions should be made to editor@behorizon.org through an email with “NATO4EVER Article Contest” in the subject line and the author’s short biography in the attachment. The manuscripts should conform to the editorial requirements defined in our webpage. Upon receipt of the manuscript, the applicants will receive a confirmation e-mail. The results of the evaluation by the editors will be likewise communicated through email. For further enquiries, please contact editor@behorizon.org. 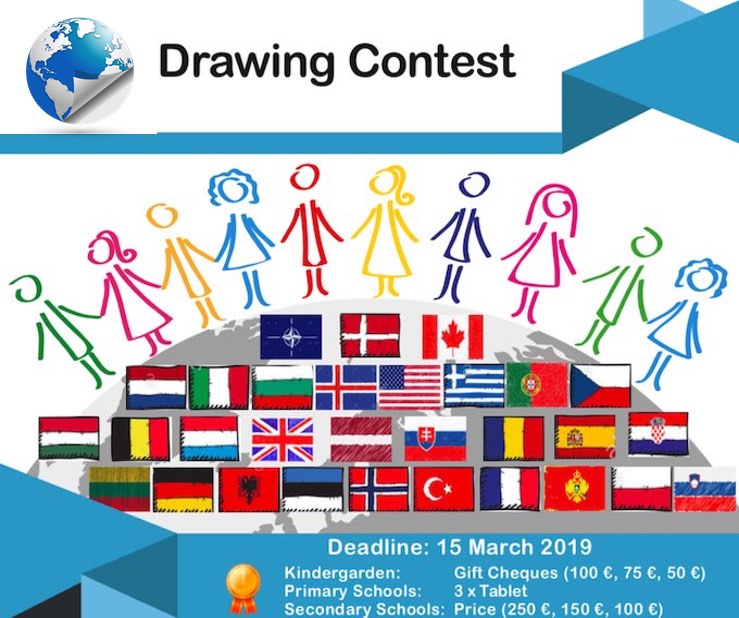 We are organizing a drawing contest to commemorate NATO’s 70th Year.

Please attach your artwork the signed official permission to an email to info@behorizon.org and include “NATO4EVER Drawing Contest” in the subject line. The attached artwork should be a scanned image or a good quality picture.

Please also include all the relevant details; name, first name, school name, class, age, the title of the artwork and the medium used by downloading Pdf version of documents that are linked to below buttons.

On 4th April 2019, NATO will mark the 70th anniversary of the signing of the North Atlantic Treaty. This same year, many Allies will mark the 10th, 15th and 20th anniversaries of their joining the Alliance. To commemorate these milestones, NATO is developing an integrated approach involving the sponsoring of a broad spectrum of events seeking to engage both home and partner country audiences. In order to contribute 70th anniversary of NATO,  Beyond the Horizon creates NATO4Ever portal to promote this initiative.

Through these informative quizzes, we want to increase our audiences' awareness level of NATO. After completion of the quiz, each participant will receive a confirmation e-mail about the results and answers. At the end of the week, one of the most successful participants will be selected and receive a 50€ monetary award. Should you are selected as the winner, you will be contacted by our admin with e-mail for the procedures.

Winner of the quiz will be informed sooner. Thanks for your participation and interest.