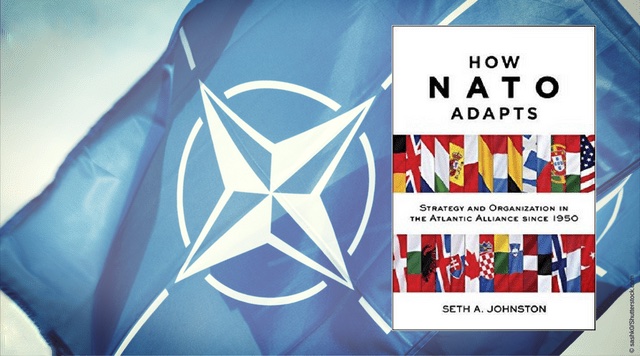 Dr. Seth Johnston’s “How NATO Adapts” is first and foremost a book about NATO’s history. It explains changes in NATO’s strategy and organisation – terms identified as external and internal units of analysis in institutional adaptation, respectively – throughout its history by using a framework of critical junctures[1] and shows how NATO adapts to the changes in the international system and maintains its institutional identity.

Cover image of the book is an indicator of the pace of NATO’s adaptability and change. It was designed in 2017 and consists of (then) 28 flags of NATO members – which is 29 now, after less than two years – with the accession of Montenegro and (future) Republic of North Macedonia is expected to become 30th member of the Alliance[2].

The book contributes to the literature by emphasising NATO’s character as an international institution rather than an alliance among sovereign states. The author underlines that international organisations, like states, are critical players in international relations. The key finding of the book is that NATO’s bureaucratic actors played important and often overlooked roles in its adaptations. The author also argues that the functions of NATO’s formal institutions – which have achieved a higher degree of formal institutionalisation than any other alliance in history – have played a significant and largely under-appreciated role in how NATO works and adapts. Institutional adaptation mechanisms include convening, agenda-setting, delegating, information-sharing, delaying, moderating and co-opting, as identified by the author.

The author selects three case studies of critical junctures in NATO history, as well as an assessment of the argument’s applicability to contemporary challenges. The first case is about redefining the role of Germany in post-WWII order. The second case deals with the political environment in the early 1960s when France withdrew from NATO’s integrated military structure, and American nuclear deterrence was questioned in the wake of the Cuban Missile Crisis. The third case is about the collapse of the Cold War Order, where NATO’s existence was being questioned since its main adversary ceased to exist. A fourth chapter tries to demonstrate the applicability of the author’s overall argument to NATO’s new expeditionary endeavours such as Kosovo and Afghanistan. Institutional alternatives to NATO (European Defence Community – EDC, United Nations – UN, the European Union – EU and the Organization for Security and Cooperation in Europe – OSCE) were observed in the aftermath of critical junctures, as Johnston pointed out, but NATO has managed to adapt itself and endured.

Author’s military and academic background helped him to capture both the military and political dimensions of the developments in NATO’s history. The author’s concise style in summarising relevant historical events is exceptionally good. The language used in the book is clear and easy to follow which makes it valuable not only for academia but also for multinational defence and security practitioners. Its bibliography consisting of official NATO documents and relevant international legal materials is particularly rich. Author’s ability to reach first hand NATO sources and officials added value to the study.

The book reflects an overwhelmingly American point of view on relations between two sides of the Atlantic. As depicted in the book, historically France as the dominant actor in continental Europe who was/is at the epicentre of almost all critical junctures has demonstrated a critical behavioural pattern towards some NATO initiatives, particularly those initiated by the U.S. This aspect of NATO history might have better been scrutinised. Additionally, the penultimate chapter of the book which deals with NATO adaptation in the twenty-first century is not detailed as the previous chapters.

The book truly deserves to be a reference document for those who wish to begin their carrier at NATO or defence and security practitioners who are assigned to NATO posts. Last but not least, developments after Russia’s illegal annexation of Crimea in 2014 and how NATO tries to adapt to the changed security environment would be the new chapter of the next revised edition of the book.